Florida Sen. Marco Rubio’s campaign, which officially kicks off Monday, has so far attracted paltry support from Republican voters, according to polls in Iowa and New Hampshire, as well as nationally. He’s down near Chris Christie! Yet, when we talk about him in the FiveThirtyEight office, we usually put Rubio in the top tier, in front of everyone except Jeb Bush and Scott Walker, the two candidates at the top of the polls.

Why? Rubio is both electable and conservative, and in optimal proportions. He’s in a position to satisfy the GOP establishment, tea party-aligned voters and social conservatives. In fact, Rubio’s argument for the GOP nomination looks a lot like Walker’s, and Rubio is more of a direct threat to the Wisconsin governor than he is to fellow Floridian Bush.

To win a presidential nomination, you need to make it past the party actors (i.e., elected officials and highly dedicated partisans). You can have all the strong early poll numbers in the world (hello, Rudy Giuliani), and your candidacy can still fail if party bigwigs come out against you. Rubio has a real chance of surviving — or even winning — the invisible (or endorsement) primary.

Rubio doesn’t have the flaws the other two official GOP candidates have. He’s a hawk on foreign policy (with an 89 percent conservative foreign policy score in National Journal’s vote ratings), so he’ll be able to avoid the pitfalls of Rand Paul’s candidacy. And Rubio isn’t anywhere near as extreme as Ted Cruz and has not alienated his fellow senators, so we shouldn’t expect mainstream party members coming out of the woodwork to stop Rubio. But he’s a solid conservative; statistical ideological ratings put him right in line with the average Republican in the 113th Congress. 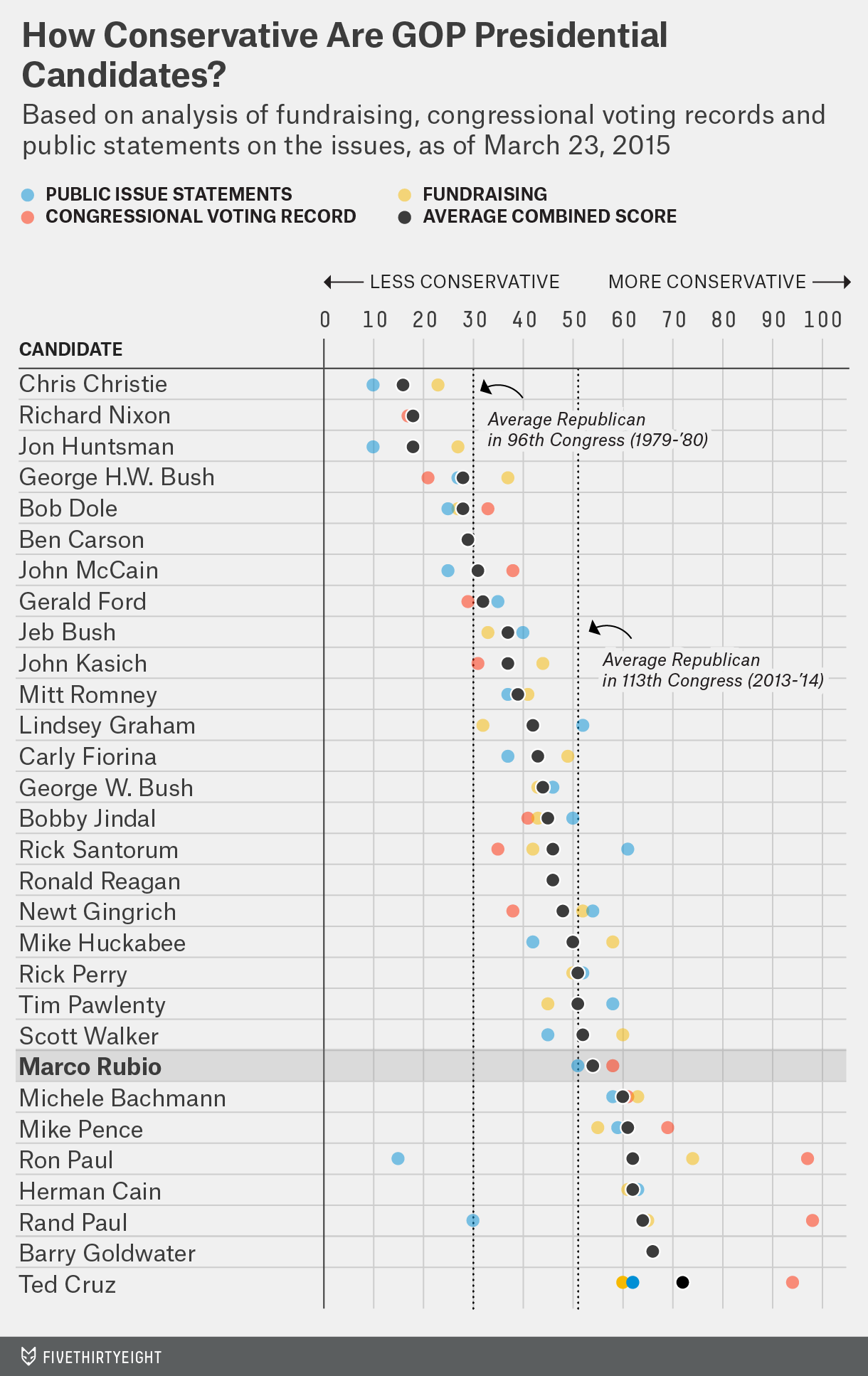 Unlike another Chamber of Commerce favorite, Bush, who is expected to face resistance from the right of his party, Rubio was a darling of the tea party movement in 2010. Although Bush and Rubio are both from Florida, Rubio’s record suggests that he could be a more conservative alternative to Bush, rather than a direct challenger to Bush for the moderate/liberal wing of the GOP.

Remember when Rubio ran Charlie Crist out of the party in his 2010 Senate bid? He did so thanks, in part, to support from conservative stalwarts Sen. Tom Coburn, Sen. Jim DeMint and Rep. Paul Ryan. Rubio has a 93 percent lifetime rating from the Club for Growth. He has a real chance of winning the backing of tea party leaders such as Sen. Mike Lee. He has even managed to stay acceptable to Glenn Beck.

And yet, Rubio has some decent electability credentials. He isn’t polling particularly well with Hispanics right now, but Rubio pulled 40 percent of the non-Cuban Hispanic vote in a three-way contest in his 2010 Senate bid. Mitt Romney, by contrast, won only 27 percent among them in the two-way presidential race in 2012.

In part because he did so well with Hispanics, Rubio vastly over-performed most other Republican senatorial candidates in 2010, as well as those who ran in 2014.1 Rubio won his race by 11 percentage points more than you would have expected controlling for the past presidential vote of the state and incumbency.2 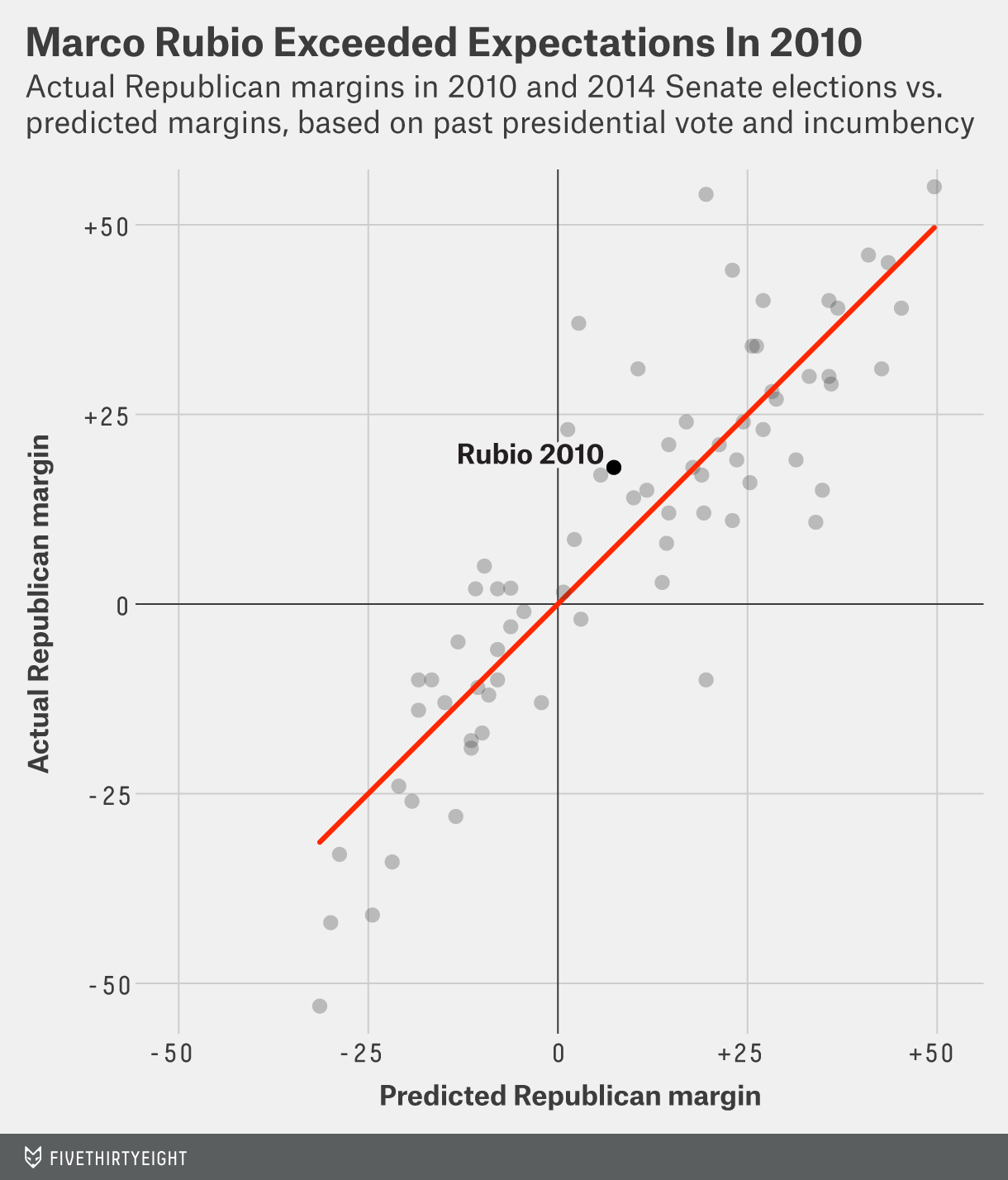 Only nine of 72 Republican senatorial candidates in 2010 or 2014 performed better against expectations than Rubio. That’s a stronger claim to electability than Walker has made in Wisconsin (and Walker’s claim is pretty strong).

So Rubio can credibly tell Republican activists that he’s one of them ideologically and tell the establishment that he can win. But making it through the invisible primary merely means Rubio will get a chance in the actual primary, and he’s barely registering any support — doesn’t that tell us something?

It may, but there is other polling data that suggests Rubio has a lot more upside than the other potential candidates polling in the mid-single digits with him.

For one, Republican voters like Rubio. In an average of live interview polls taken since the beginning of the year, Rubio’s average net favorable rating is second only to Mike Huckabee’s.

Rubio and Christie may be neck-and-neck in horse race polls, but GOP voters don’t like Christie. They like Rubio.

You’ll note, though, that Rubio isn’t blowing away the rest of the field. He has a similar net favorable rating to a lot of the other candidates. Indeed, as I found previously, having a strong early net favorable rating doesn’t guarantee future success. It’s one thing to like a candidate, and it’s another to want him to be president. Being well-liked is a necessary but not sufficient condition to winning a presidential primary.

But what separates Rubio from a number of his well-liked opponents, including Cruz, Paul and Rick Perry, is that Republican voters have signaled more of a willingness to vote for Rubio. 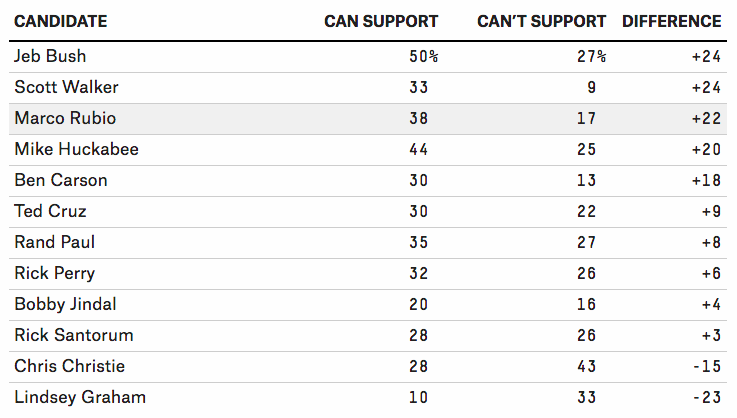 According to an average of 2015 CBS News surveys, 38 percent of Republican voters say they could support Rubio, compared with just 17 percent who say they couldn’t. The margin (+22 percentage points due to rounding) between those puts Rubio right alongside Bush and Walker. In other words, Rubio is up with the top candidates again. In a campaign in which no one is consistently polling above 15 percent, Rubio remains a candidate who looks like he can be a lot of people’s second or third choice.

Part of the reason Rubio remains so well-liked is that he is ideologically in line with Republican voters, just as he is with Republican officeholders. According to March YouGov polling, Republicans are more likely to say Rubio is “about right” on the issues than “too conservative” or “not conservative enough” by a 34 percentage point margin. 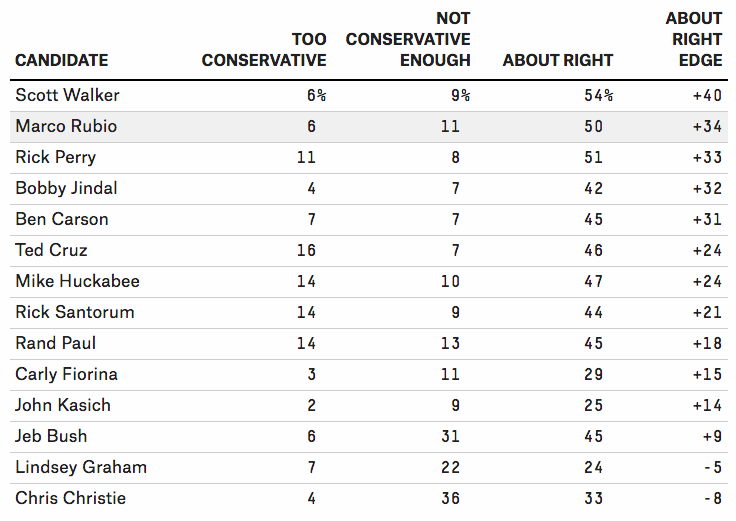 That’s the second-widest margin of any Republican candidate. Rubio is well ahead of Bush and just behind Walker.

Which brings us back to Rubio’s path to the GOP nomination: It looks a lot like Walker’s — pulling together conservative and establishment Republicans. Neither Rubio nor Walker has the appeal with moderate and liberal Republicans that Bush does at this moment. Here are net favorability numbers from a March Gallup survey (which were similar to state-level Quinnipiac polls): 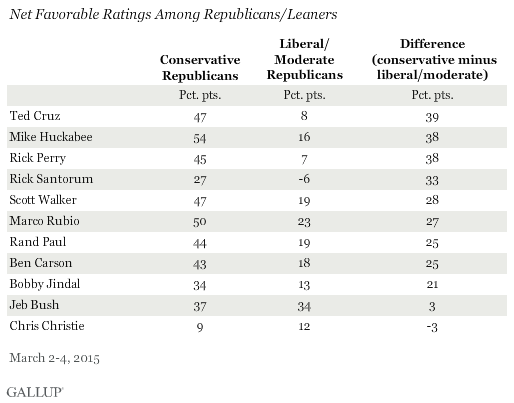 Moderates and liberals make up about 30 percent of Republican primary voters. They account for closer to 35 percent in states that President Obama carried in 2012. These states hold half of the Republican primary delegates, as The New York Times’s Nate Cohn previously pointed out. It’s how John McCain and Romney were able to win the GOP nomination despite weak standings among very conservative voters.

So while the press usually lumps Rubio and Bush together because they’re both from Florida, Rubio and Walker are more likely to be in direct competition. Current polling aside, Bush’s bumper sticker reads something like “Very electable, and kind of conservative.” Rubio’s and Walker’s read “Conservative, and electable.”

In the early stages of the 2016 campaign, Walker has gotten more mileage out of that argument. But Rubio is in a good position to take advantage of any Walker missteps. Of the candidates to officially declare so far, Rubio is the first with a good shot at the nomination.