Kentucky Sen. Rand Paul’s presidential campaign is less than a day old but already suffers from an identity crisis. Paul wants to win, but he can only do so if he is seen as more mainstream than his father, Ron Paul, who ran for president in 2008 and 2012. At the same time, Paul can’t completely jettison the far-left and far-right positions that have made him a hero to the substantial number of Republican libertarians who made up his father’s base.

In Paul’s dream world, he’ll satisfy everyone. In the most likely real world, he’ll end up satisfying no one.

The most obvious path for Paul to win the GOP nomination is to build on the 21 percent of the vote his father earned in Iowa in 2012, and the 23 percent Paul Sr. picked up in New Hampshire that year. In a divided primary field, that might not seem so difficult; 25 percent might be enough to win both states. And with wins in the first two contests, Paul might be able to ride the Big Mo’ to the nomination.

But right now, Paul isn’t anywhere close to where his father ended up in either state in 2012. Paul is polling at a little less than 9 percent in Iowa and nearly 11 percent in New Hampshire. That’s far closer to the percentage of the vote earned by Paul Sr. in both states during his 2008 bid for the presidency, which was far less relevant than his 2012 run.

In fact, Paul is losing support across the board. While he was initially able to outpace his father’s 2012 success, his national numbers have been dropping over the last year. 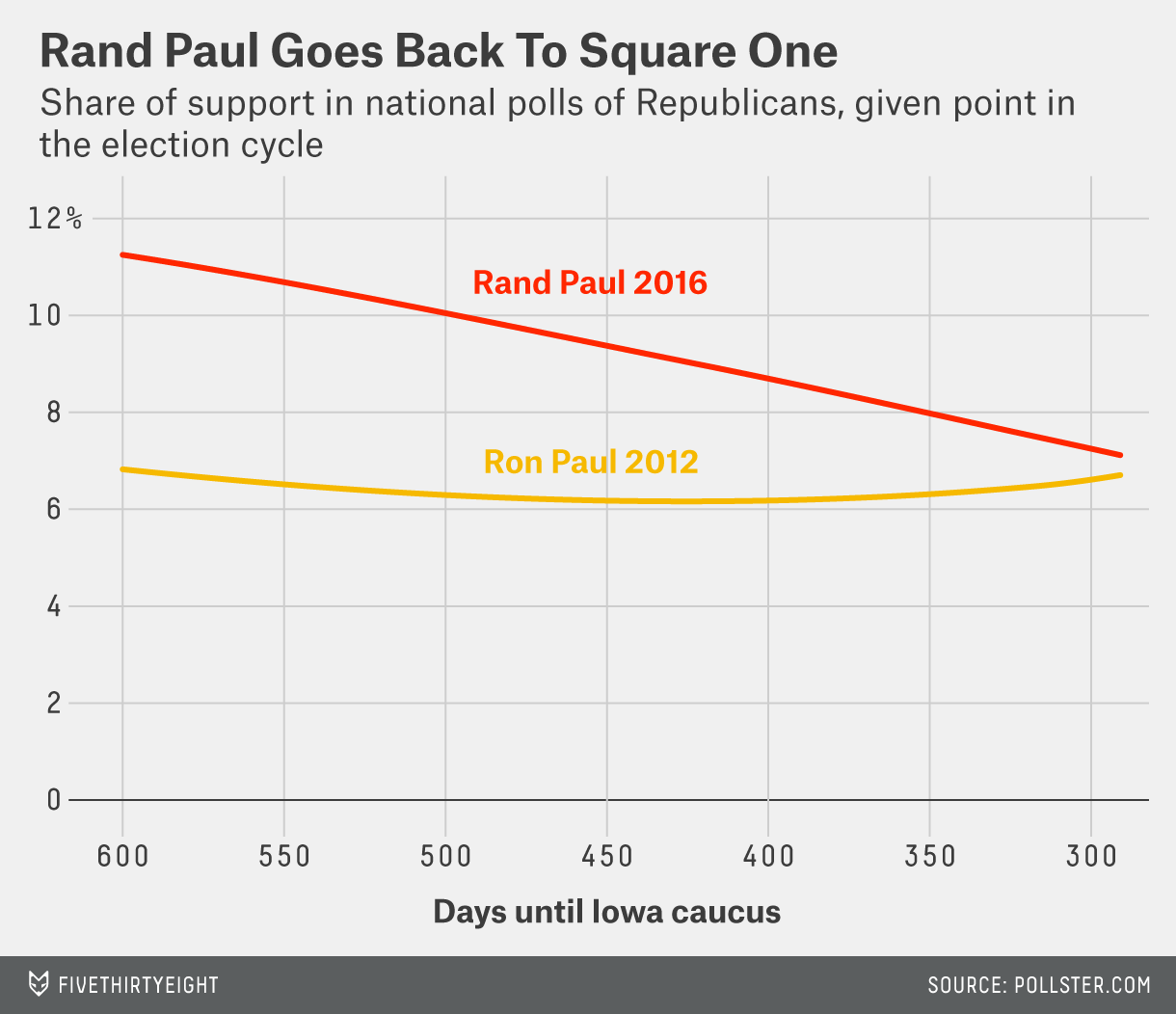 We’ll see a lot of ups and downs in the 2016 campaign, but there’s reason to read more into Paul’s recent polling slide, as he’s spent the last year trying to increase his appeal with the GOP establishment, particularly on foreign policy.

When was the last time you heard Paul accused of being an isolationist? He used to advocate for cutting foreign aid to Israel, but now he offers pro-Israeli bill after pro-Israeli bill to cut off funding to the Palestinians. He once seemed to favor President Obama’s diplomatic overtures to Iran, but he signed Sen. Tom Cotton’s letter aimed at hurting those negotiations. Paul was once reluctant to get involved in fighting the Islamic State, but he now wants more airstrikes.

There really isn’t good public data on the views of libertarian Republican voters, but interviews and internal polls suggest that Paul’s evolution on foreign policy has been too successful in separating him from his father, and has eroded his libertarian credentials. Ron Paul’s 2012 Iowa campaign chairman Drew Ivers would “prefer if [Rand Paul] had a different strategy” than “meeting [mainstream Republicans] in the middle.” Aaron Day of the libertarian Free State movement in New Hampshire sees less enthusiasm for Rand Paul than for his dad.

To get to 25 percent in the two early states, Paul can’t afford many libertarian defections in either. A recent internal Liberty Iowa poll showed that Paul was the choice of about two-thirds of Ron Paul’s Iowa convention delegates. That may seem like a lot, but if Paul wins only 70 percent of his father’s backers that puts him at 15 percent of the vote in Iowa. He’d need to build on his dad’s support by 10 percentage points from one of the GOP’s other wings.

Yet, for all his shifting, Paul hasn’t seen a major payoff with the foreign policy hawks in his party. While there doesn’t seem to be as much visible hatred for Paul as there is for, say, Ted Cruz among his fellow senators, Paul is one of the few candidates who is attracting opponents to jump into the presidential race just to stop him. Lindsey Graham — and potentially John Bolton — might waste half a year or more of their lives campaigning in large part because they disagree with Paul on foreign policy.1

As I’ve noted previously, it’s very difficult to win a party’s nomination when party officials don’t like you. In primaries, voters tend to take their cues from party actors because the ideological differences between candidates are significantly smaller than they are in a general election. And for the GOP establishment, it’s easy to find a deal-breaker in Paul’s portfolio.

According to OnTheIssues,2 Paul currently scores a 53 on social/military issues. That means he is slightly more liberal than conservative on these issues (50 is the inflection point). If Paul won the nomination, he’d be more liberal than any Republican nominee since Richard Nixon.

But Paul can’t really make a play for the endorsement of moderate GOP officials either. His economic record would make him the most conservative candidate to win the Republican nomination since Barry Goldwater. Paul wants to audit the Federal Reserve and scrap the tax code, among other pet issues. 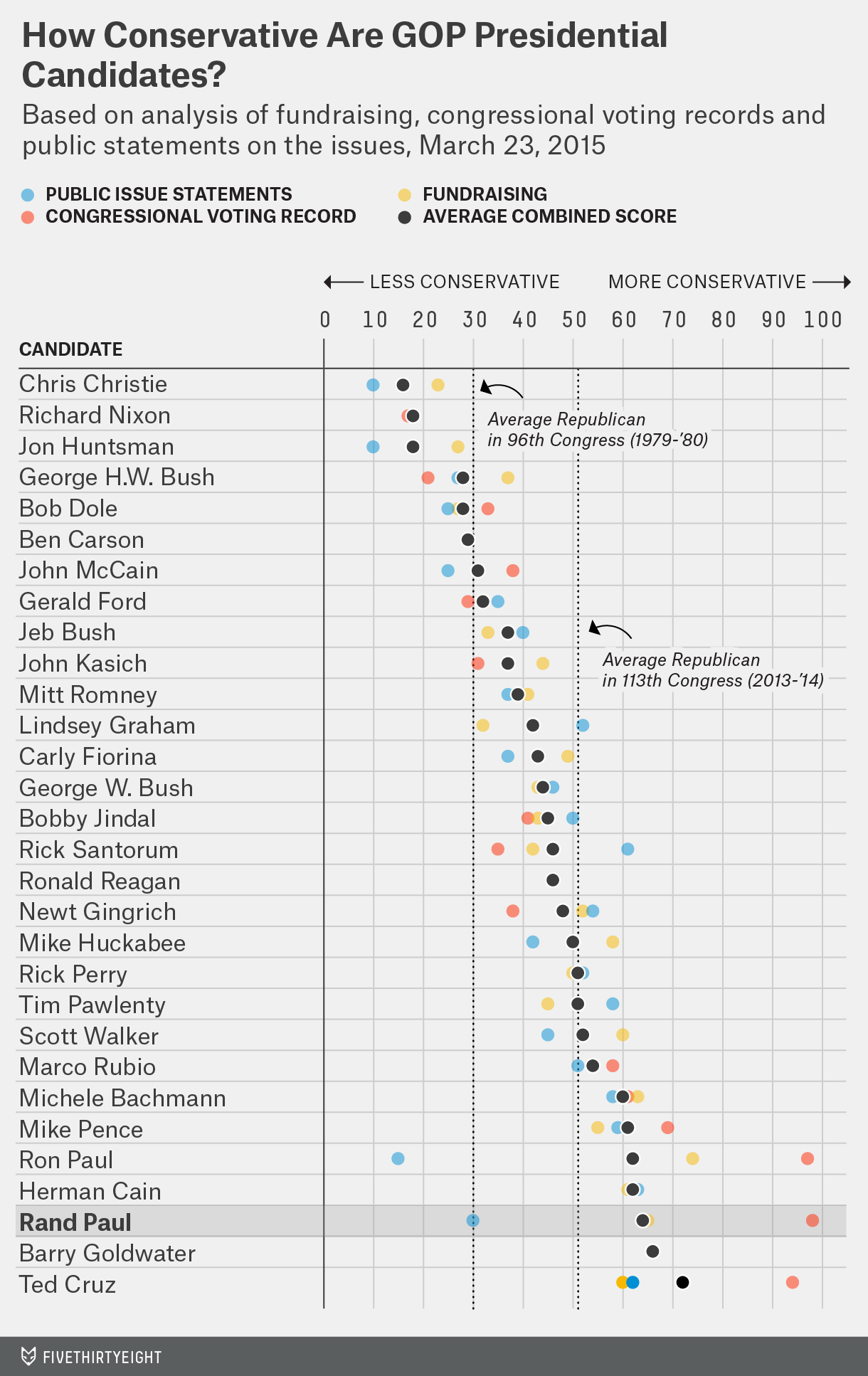 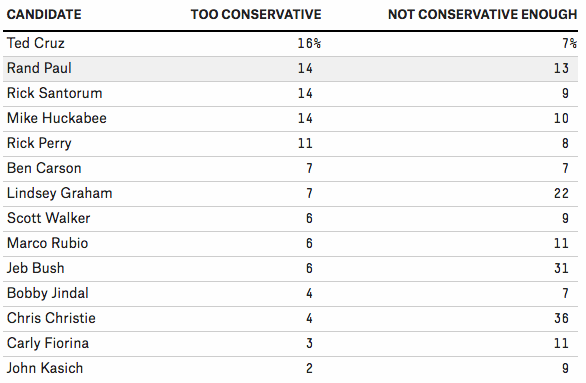 Indeed, Paul looks like he’ll have the problem his father had once the campaign left the early states. Over the past two months, CBS News has polled Republican primary voters to ask whom they’d consider voting for. On average, only 35 percent of Republicans say they’d consider voting for Paul, compared to 27 percent who say they wouldn’t. That small +8 percentage point difference puts Paul a good deal behind the top tier of the Republican field (Jeb Bush and Scott Walker are each +24). 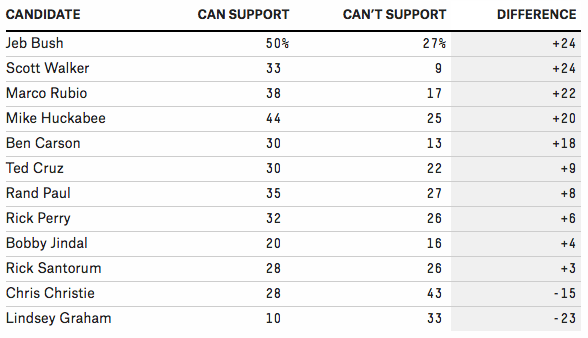 These numbers aren’t debilitating, but they indicate that Paul has yet to figure out how to successfully burn both ends of the candlestick.