There have been rumors for months that Mitt Romney might run for president again in 2016. On Monday afternoon, though, The Washington Post’s Robert Costa, Philip Rucker and Karen Tumulty — three top-notch journalists — reported that Romney was reassembling his campaign apparatus and had told a senior Republican he “almost certainly will” run. The news came on the same day that Paul Ryan, Romney’s running mate in 2012, said in an interview that he wouldn’t run for president.

What is Romney thinking? Candidates who lose general election campaigns don’t have a good track record when they’ve tried to run again. But as my colleague Harry Enten pointed out last week, Romney isn’t nuts to think he has a shot. The GOP field is historically divided, and Romney has more experience than anyone else in the party uniting (or at least placating) its constituencies. And Romney is vetted, skilled at raising money and starts out with near-universal name recognition.

But Romney also enters a crowded field. In the past, we’ve sometimes conceived of the GOP field with a Venn diagram that we call the “five-ring circus.” It portrays the major constituencies within the party — the establishment wing, the moderate wing, the tea party, libertarians and Christian conservatives — and how they overlap. Here’s how we think of things as shaping up so far for 2016: 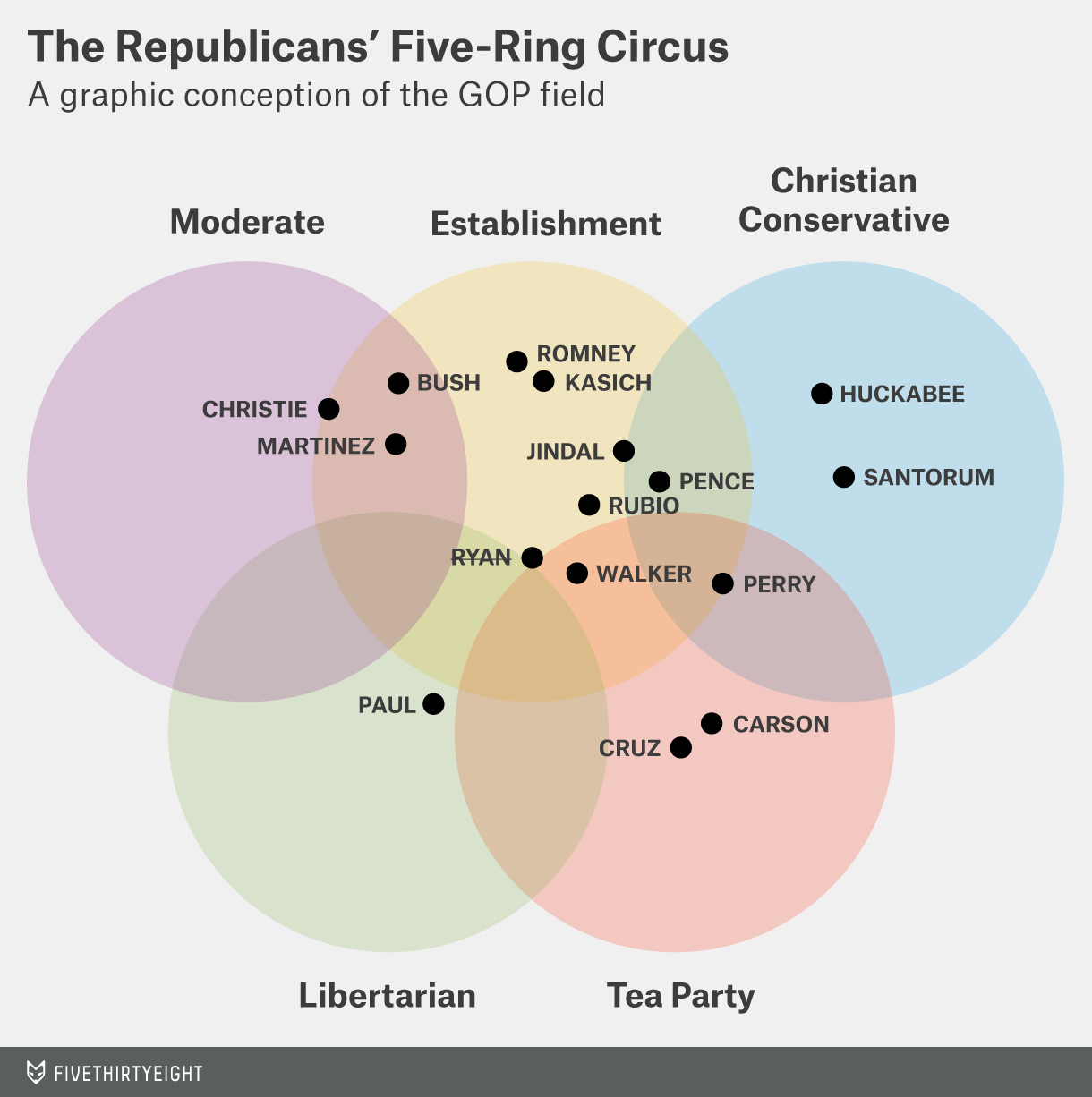 The chart is an oversimplification, but it recognizes the GOP’s dynamics are more complex than a simple left-right spectrum would imply. Some wings overlap more with others. For instance, a candidate could easily have a lot of appeal to both tea party and libertarian voters. But it’s unlikely that one candidate would simultaneously be the choice of both Christian conservatives and moderate voters.

You can listen to FiveThirtyEight’s lead politics writer, Harry Enten, and I plot the candidates on the diagram:


The establishment constituency plays an especially important role because it overlaps with all other groups and seeks to unify the party. And it’s a good place to be — usually the eventual nominee comes from its ranks. The downside is that, because it’s a desirable space, the establishment field is usually crowded.

Romney, having calibrated his positions in 2008 and 2012 in seeking to become the GOP’s consensus choice, sits squarely within the middle of the establishment. However, he could potentially be boxed in. While The Washington Post report suggests that Romney could run somewhat to his right to distinguish himself from candidates such as Bush and Christie, Christian conservatives could find more appealing choices in the form of Mike Huckabee and Rick Santorum. Walker could be more attractive to voters who dabble in the tea party, while Ted Cruz and Ben Carson will appeal to those who fully embrace the label. Rand Paul, although he’s seeking to make inroads with establishment and tea party voters, should have the libertarian wing of the party locked up.

Not all of these candidates will run. Part of Romney’s goal will be to pare down the field during the “invisible primary,” convincing influential Republicans that Bush is too moderate, that Rubio isn’t ready, that Paul is too far afield and so forth. Romney’s experience and resources should help him, although the field looks to be more crowded than it was in 2012.

Establishment candidates also seek to portray themselves as being highly electable, or at least the most viable sufficiently conservative candidates. So perhaps the most important determinant of how far Romney gets will be how he’s able to make the electability argument — despite having just lost the election in 2012.

What narrative will Republicans tell themselves about why they lost with Romney at the top of the ticket? A case can be made that 2012 was a pretty tough election to win: Incumbents aren’t easy to beat, the economy had improved just enough to slightly favor President Obama, and Obama had a terrific turnout operation that the next Democratic nominee might not be able to match.

But this wasn’t the story that Republicans were telling themselves during and immediately after the 2012 campaign. Instead, many Republican thinkers saw the 2012 election as theirs for the taking and refused to believe polls that showed Obama with the edge. There were furious recriminations after Romney lost, blaming his polling, his vote-tracking software and his overall messaging. Other Republicans blamed what they said was the Democrats’ rising demographic tide — something that isn’t necessarily Romney’s fault, but which presumably wouldn’t be helped by nominating an aging white man (Romney will be 69 at the time of the 2016 general election) with conventionally conservative positions.

While Romney could perhaps beat out Bush, whose candidacy hasn’t been received all that well by conservative elites so far, a fresher face like Walker or Rubio could be more problematic. Or if the establishment field became too crowded, it could open up room for a candidate like Paul to win by plurality. Romney’s path is not impossible — after all, Republicans nominated him in 2012. But he faces a tougher sell and a tougher field than he did four years ago.