UPDATE (June 14, 7:52 a.m.): Former Florida Gov. Jeb Bush is expected to announce his White House run on Monday. Last year, we looked at where he falls on the ideological spectrum.

On Tuesday, former Florida Gov. Jeb Bush announced that he will “actively explore” a bid for the White House. While Bush has not yet formed a presidential exploratory committee, he’s “running” for president by any practical definition of the term. If he proves to perform poorly in the “invisible primary,” failing to gather support among donors and influential Republicans, he could withdraw later on, before the first votes are cast in Iowa.

What might those influential Republicans think of Bush? He has sometimes been critical of his fellow Republicans, having questioned the GOP’s partisanship and lack of tolerance for dissenting viewpoints. He has also staked out moderate policy positions on some issues, particularly immigration and education reform.

But is Bush in the mold of Jon Huntsman and Rudy Giuliani — candidates who generated lots of buzz among the East Coast media elite but proved too moderate for the Republican base? Or is he more like the past two Republican nominees, Mitt Romney and John McCain, who also were accused of being too moderate but won their party’s nomination?

The short answer: We’ll see, and we’ll want to watch for news of Republicans who endorse Bush’s candidacy or criticize it. But he’s probably more like Romney or McCain than like Huntsman or Giuliani.

Last year, we constructed ideological scores for a set of plausible 2016 Republican candidates based on a combination of three statistical indices: DW-Nominate scores (which are based on a candidate’s voting record in Congress), CFscores (based on who donates to a candidate) and OnTheIssues.org scores (based on public statements made by the candidate). None of these methods is perfect — they disagree on how to classify the libertarian-leaning Republican Rand Paul, for example — but they give us some empirical basis to make comparisons. The closer a candidate’s score is to zero under this method, the more moderate he is. And the closer he is to 100, the more conservative. (Liberal candidates would be listed with negative scores.) Here’s how Bush compares: 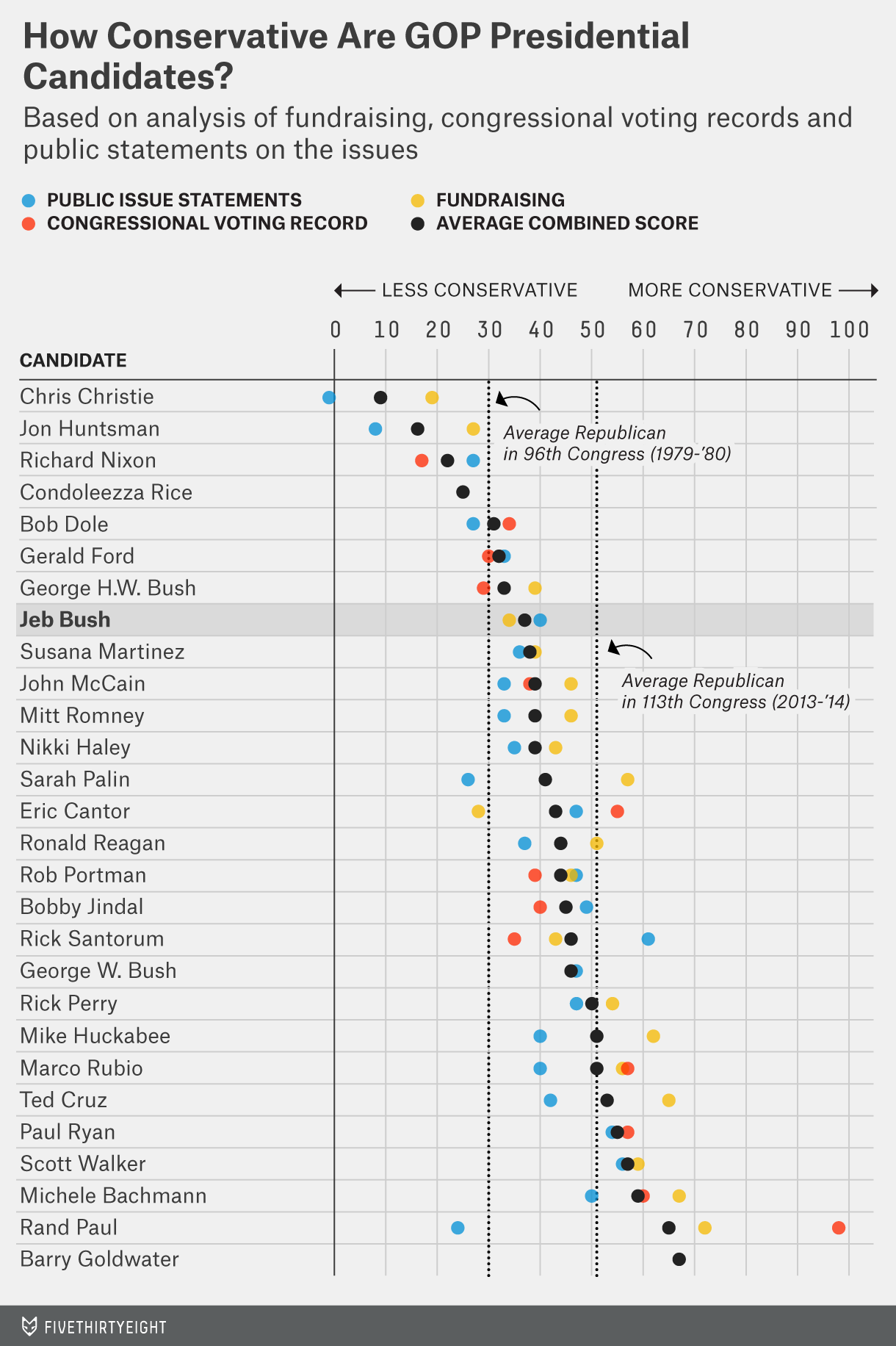 Bush scores at a 37 on this scale, similar to Romney and McCain, each of whom scored a 39. He’s much more conservative than Huntsman, who rates at a 17.

Still, Bush is more like his father, George H.W. Bush, who rates as a 33, than his brother George W. Bush, who scores a 46. And the Republican Party has moved to the right since both Poppy and Dubya were elected. The average Republican member in the 2013-14 Congress rated a 51 on this scale, more in line with potential candidates Marco Rubio, Paul Ryan and Mike Huckabee.

So as a rough cut, Bush is not especially moderate by the standard of recent GOP nominees. But the gap has nevertheless widened between Bush and the rest of his party.

On the two issues where he has most outspokenly deviated from his party, immigration and education, his policy positions are not far removed from those Republican voters declare in polls. But these issues may also take on symbolic significance beyond their immediate policy implications, signaling to Republican voters that a candidate is too moderate or too much a part of the establishment. Earlier this year, my colleague Harry Enten found Republican senators who have adopted Bush’s moderate stance on immigration have been especially likely to receive primary challenges.

And Bush has been more like Hunstman than Romney in explicitly critiquing the direction of his party. That may appeal to general-election voters, but it probably isn’t helpful to him in a Republican primary.

Still, parties have shown some historical tendency to nominate successively more moderate candidates the longer they’ve been out of the White House. That could help Bush. While he’s somewhat to the left of the average Republican politician, there’s also less competition on that side of the GOP spectrum; most Republican senators and governors first elected during the past several election cycles have been quite conservative.

That’s not to say he has the field all to himself. Romney has sometimes been considered a 2016 candidate. So has New Jersey Gov. Chris Christie (who rates as being far more moderate than Bush on our scale). New Mexico Gov. Susana Martinez has less of a national profile, but also overlaps ideologically with Bush.

Perhaps more important is the relatively early date of Bush’s announcement. If he builds an early advantage in the “invisible primary,” he could deter some of these candidates from running and make it harder for them to gain momentum if they do. The early announcement will also give Bush more time to calibrate his positions while under comparatively little scrutiny.

There will almost certainly be some credible candidates to Bush’s right, like Ryan or Rubio or Bobby Jindal or Scott Walker. Roughly 31 percent of Republican primary voters describe themselves as moderate or liberal, potentially enough to leave Bush as one of two or three remaining viable nominees after the first few states vote in 2016. That’s when he’d have to do his best campaigning — by pivoting to his right, or by convincing Republicans that his electability outweighs ideological purity. Bush may face more vigorous competition on his right in 2016 than Romney did in the likes of former Pennsylvania Sen. Rick Santorum and then-Texas Gov. Rick Perry in 2012. And to the extent that Republican voters have shifted slightly further to the right over the past four to eight years, that could make his task harder at the margins.

Betting markets put Bush’s chances of winning the Republican nomination at 20 percent to 25 percent, which seems as reasonable an estimate as any. You can get there by assuming there’s a 50 percent chance that he survives the “invisible primary” and the early-voting states intact and a 40 percent to 50 percent chance that he wins the nomination if he does. It’s a strategy that worked well enough for McCain and Romney.