Hillary Clinton’s book tour and accompanying media interviews have reignited the buzz over her presidential aspirations: What will she decide, and when? Clinton has said early 2015 is her target for a decision, and that fits quite well with trends in the modern era of presidential campaigns.

If we look at when past candidates have officially jumped into primary campaigns (not including incumbent presidents), a few things become clear:

I collected data on when the Iowa caucus took place and when significant candidates announced their intention to run for president since 1972. I only looked at candidates who ran national campaigns (e.g. a contender wasn’t just a favorite-son candidate who ran in one state); who made it to the Iowa caucus; and who got more than 2 percent of the vote in Iowa or New Hampshire, or served as a congressman, governor or senator within two years of running. In other words, we’re looking at serious candidates. I count a candidate as announcing when he either says so publicly or files with the Federal Election Commission to at least explore a bid — whichever comes first. Note, there was no FEC in 1972.

Here’s the picture for Republicans and Democratic candidates since 1972. On the left, the announcement/filing dates of individual candidates are plotted by days before the Iowa caucus. On the right is a box-and-whisker plot; the box shows the middle 50 percent of candidates, and the whiskers show the range (outliers are shown as dots): 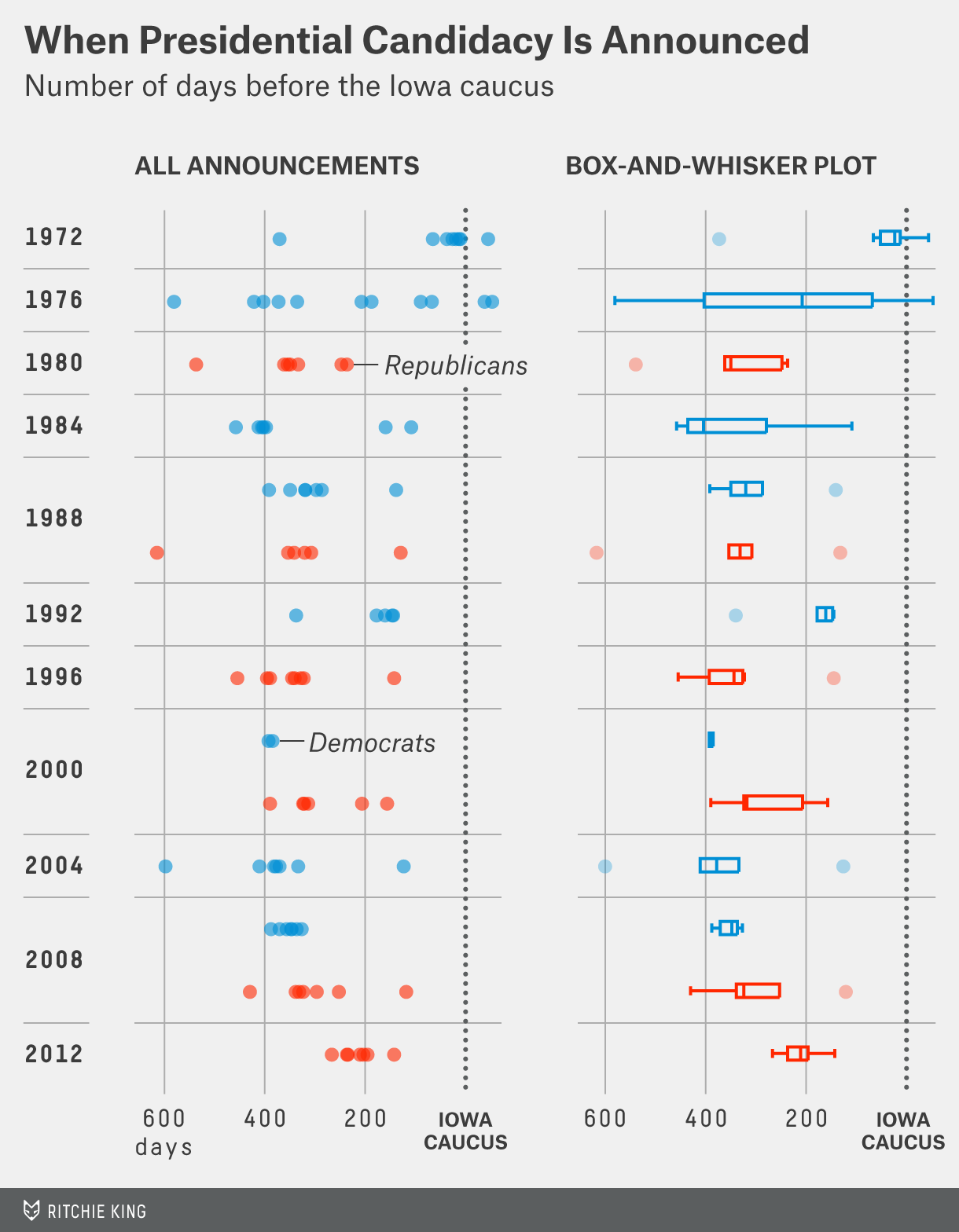 The chart shows that in the 1972 and 1976 Democratic primaries, a lot of candidates waited until very late to declare. Half the field waited until just a month before Iowa in 1972. In 1976, a quarter waited until about two months before Iowa.

Yet in both years, the winning candidate announced early. The Democratic nominee in 1972, George McGovern, said more than a year before Iowa that he was running. Then in 1976, several candidates followed his lead. This list included Jimmy Carter, who declared his intention to run 403 days before the Iowa caucus.

After Carter won in 1976, most candidates adopted the strategy sooner was better. In 1980, the median Republican said they were running 350 days before Iowa. No candidate declared later than 237 days before Iowa. The winning candidate, Ronald Reagan, jumped aboard 248 days before.

In 1984, the median announcement was a staggering 405 days before the Iowa caucus. Six of the eight candidates were in the race 398 days before Iowa. Reubin Askew, the former Florida governor, actually filed with the FEC in October 1981. (Jesse Jackson and McGovern did get in the game late in 1983, however.)

By 1988, we begin to see consistency in the field. Although Jackson and Pat Robertson were notable exceptions, most candidates declared within 150 days of Iowa, and the middle 50 percent of candidates announced between 298 and 350 days before the Iowa caucus. And there was no big difference between the parties.

In 1992, the Democrats announced unusually late — probably because then-President George H.W. Bush was popular. Only Paul Tsongas announced before August 1991, and he was a one-term senator from Massachusetts who hadn’t been on the national stage in over five years. The middle 50 percent of Democrats declared they were running between 147 and 178 days.

In 1996, Steve Forbes declared very late and Phil Gramm very early, but the middle 50 percent of candidates declared within a couple of months of one another — between 323 and 390 days before Iowa.

In 2000, there was a slight break in the pattern. Both Democrats (Al Gore and Bill Bradley) declared in early January 1999, but the Republicans were somewhat more scattered. Gary Bauer, George W. Bush and Forbes declared within 10 days of one another (about 320 days before Iowa); John McCain filed with the FEC 390 days before Iowa. Orrin Hatch and Alan Keyes filed 207 and 157 days, respectively, before the first contest.

In 2004, the Democrats were again fairly consistent. The middle 50 percent all declared close to 380 days before Iowa. Howard Dean was notably early, and Wes Clark got in very late.

In 2008, the bulk of Democratic candidates jumped in about 350 days before Iowa. But Republicans saw more sunlight between their announcement dates, with a span between 253 and 339 days prior to Iowa. For example, Duncan Hunter got in early on the GOP side, while Fred Thompson got in late.

In 2012, the Republicans got in fairly late. The earliest to declare, Mitt Romney, filed with the FEC 267 days from Iowa. The middle 50 percent were officially in the running between 196 and 237 days before Iowa. That’s a span of a little over a month.

So, what about Clinton? If she does run, history tells us that she is likely to announce a decision in the first couple of months of 2015 — more than 200 days ahead of the Jan. 18, 2016, Iowa caucus. So if Clinton hits her target, she’d fall right in line with recent trends.