In the time since House Majority Leader Eric Cantor was defeated in the Republican primary for Virginia’s 7th Congressional District, conventional wisdom has coalesced around an explanation for the upset: Cantor’s relatively moderate stance on immigration reform. We’re generally skeptical of quickly formed ex post facto explanations, so I looked into how big a factor immigration has been in Republican primaries.

Bigger than I thought, perhaps. Immigration reform either matters by itself or is a good proxy for where a candidate falls on the establishment-antiestablishment spectrum.

Public opinion surveys, such as the one Public Policy Polling conducted Tuesday night in Cantor’s district, have found that immigration reform is relatively popular among Republican voters. But because those surveys don’t attach President Obama’s name to the issue, they probably overestimate support among Republicans, as Mark Blumenthal and Ariel Edwards-Levy pointed out at HuffPollster.

We can, however, test whether immigration-reform-friendly Republicans do better or worse in primaries than their counterparts. To approximate support for an immigration overhaul, I used immigration scorecards issued by NumbersUSA, a group that advocates “for lower immigration levels.” Higher scores indicate that a politician supported actions more in line with NumbersUSA’s goals — an imperfect indication of being against immigration reform. Because of redistricting and the difficulty of collecting data for House members, we’re going to concentrate on senators in office during the Obama administration.

Looking at the performance of senators who faced primaries, we found that those with higher antireform scores do better in primaries. 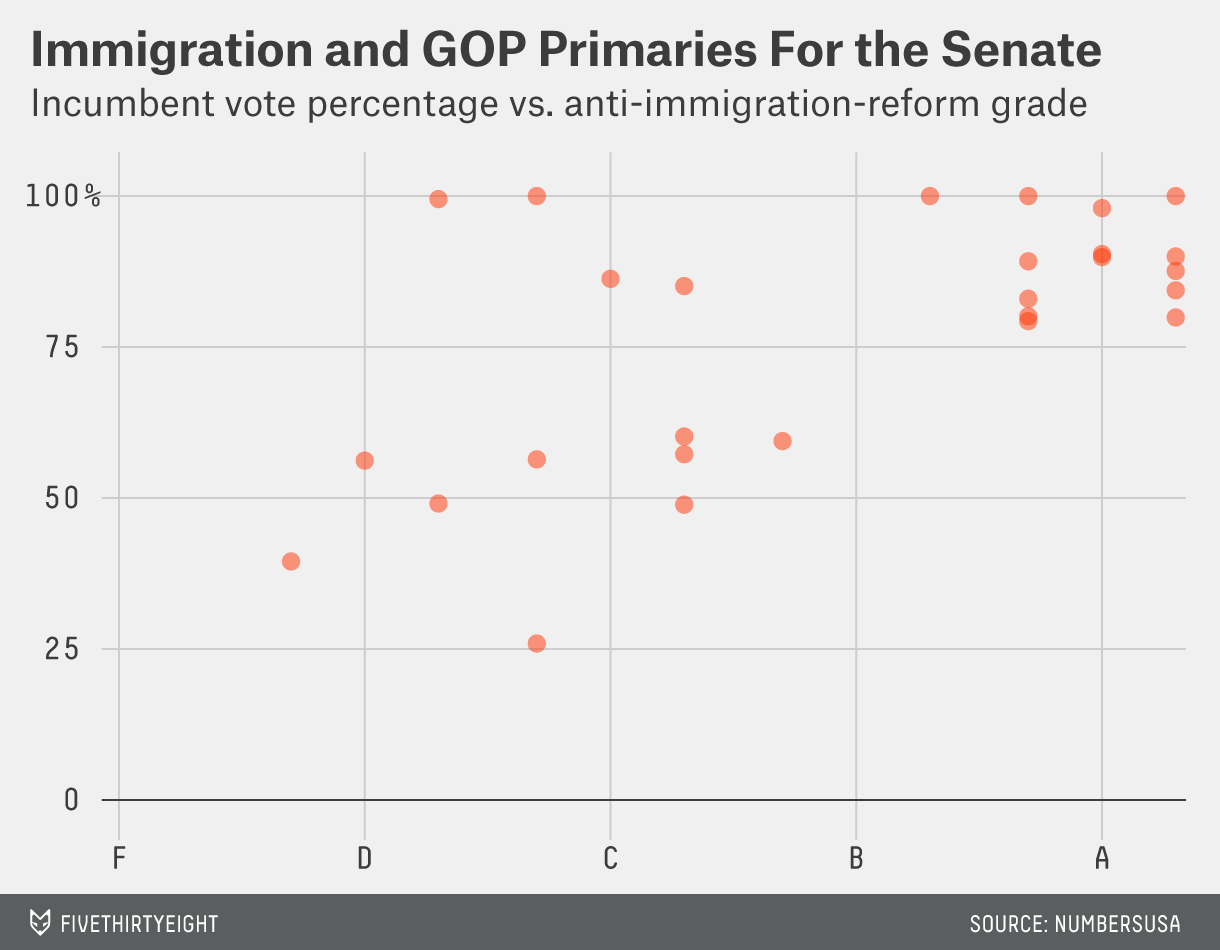 But this might reflect the partisan tilt of each state, so let’s control for Obama’s vote in the district. (We’re about to get real nerdy here; if math makes your head hurt, skip down a little.)

Although the importance of p-values can be overstated, we see the immigration score is both statistically significant — see the p-value (“P>t”), less than 0.05 is good — and substantively significant (see the coefficient for “immig,” further away from zero means there’s more of a relationship).

We can also look at the same effects when controlling for: 1) the overall ideology of each senator, and 2) the insider-outsider status of each senator. Using the DW-Nominate system, in which higher values of the first dimension are associated with a more conservative voting record (see my piece Tuesday night for a more in-depth explanation of DW-Nominate), we see that the immigration score maintains its significance. 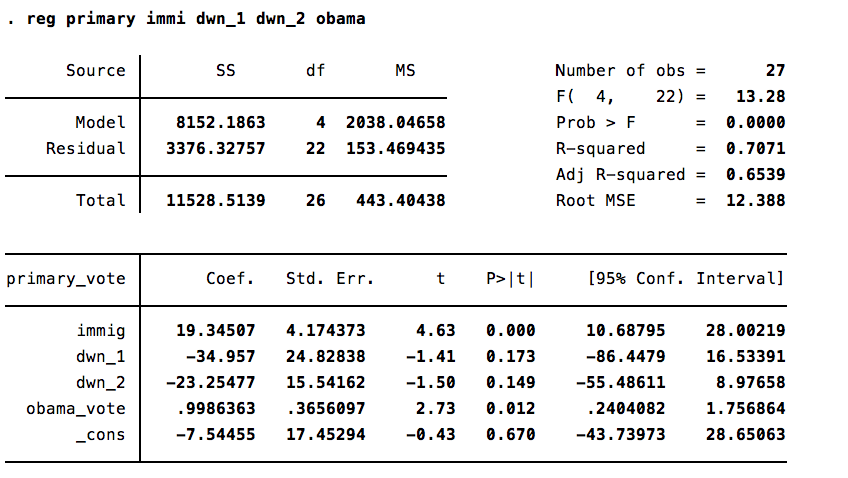 The ideology variable, “dwn_1,” is related but not significant, as is the second dimension for insider-outsider status, “dwn_2.”

You’ll note the coefficients on the DW-Nominate scores are the opposite of what they were Tuesday night. For example, the ideological variables indicates that senators who are more conservative do worse in the primaries. But we shouldn’t take that seriously. We may be dealing with a multi-collinearity problem — when the independent variables we’re looking at are closely correlated. Look at how well the immigration scores are predicted by the ideological and insider-outsider scores (see the coefficients): 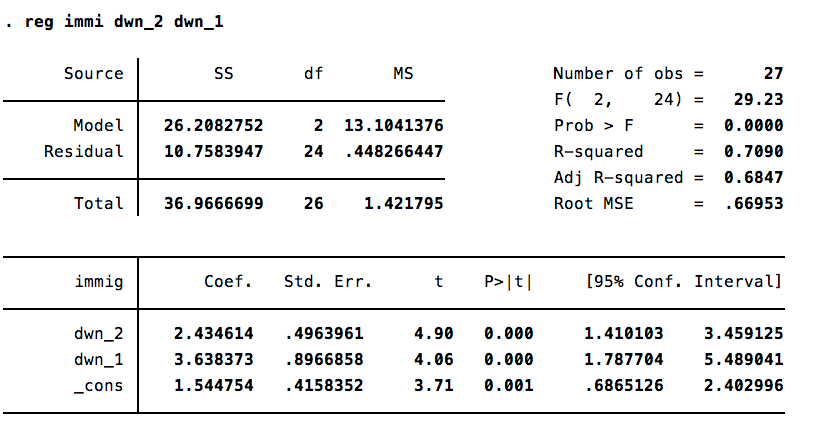 It’s no wonder that past incumbents who lost in a convention or primary tended to have low immigration and general ideological scores. According to NumbersUSA, Utah’s Bob Bennett had a C-, Indiana’s Dick Lugar had a D- and Alaska’s Lisa Murkowski had a D+ on immigration. Those all match their low DW-Nominate scores.

We’re left with at least three possible explanations for why immigration scores are tied to incumbent Republican’s primary performance.

We can’t be sure exactly what role immigration played in Cantor’s defeat, but Republican incumbents’ stance on immigration has been predictive of their performance in primaries during the Obama era. This goes beyond just being “conservative” in the traditional sense. In GOP primaries, a Republican’s willingness to compromise on immigration probably appears to do them more harm than good.