Some commentators have expressed surprise upon learning about the very conservative voting record of Senator Marco Rubio of Florida, who delivered the Republican response to the State of the Union address last week.

Since winning his Senate seat, Mr. Rubio has generally sided with other Republicans as part of a party that has steadily grown more conservative over the last three decades. (Mr. Rubio’s recent support for immigration reform is more of an exception than his usual rule of sticking to the party line.)

Being reliably conservative, however, is hardly a liability for someone who might hope to win the Republican presidential nomination in 2016. Indeed, one reason to watch Mr. Rubio carefully is that, among the candidates who will be deemed reliably conservative by Republican voters and insiders, he may stand the best chance of maintaining a reasonably good image with general election voters.

How does Mr. Rubio’s conservatism compare to the other men and women who might seek the Republican nomination in 2016 — and to other candidates, like Mitt Romney, that the G.O.P. has nominated recently?

There are several statistical methods that seek to rate candidates’ ideology on a left-right scale. FiveThirtyEight uses three of these methods in evaluating the ideology of Senate candidates as part of our technique for forecasting those races. The same methods can be applied to presidential candidates.

The first of these systems, DW-Nominate, is based upon a candidate’s voting record in the Congress. The second method, developed by Adam Bonica, a Stanford University political scientist, makes inferences about a candidate’s ideology based on the groups and individuals who have contributed to his campaign. The third method, from the Web site OnTheIssues.org, works by indexing public statements made by the candidate on a variety of major policy issues.

Not every rating system is available for every candidate: those who have never served in Congress have no DW-Nominate score, for example. And the methods sometimes disagree. The libertarian-leaning Senator Rand Paul of Kentucky is rated as being extremely conservative by DW-Nominate and by Mr. Bonica’s method, which tend to give more emphasis to a candidate’s record on economic issues. But he is rated as fairly moderate by OnTheIssues.org, which also evaluates his stances on social policy. Sarah Palin is also rated as extremely conservative by Mr. Bonica’s system, but as relatively moderate by OnTheIssues.org. (Keep in mind that before being selected as John McCain’s running mate, Ms. Palin had some history as a reform-minded governor of Alaska.)

Nevertheless, we can usually get a reasonably good objective measurement of a candidate’s ideology by essentially taking an average of the three approaches. (Because the measures are not on the same scale, I normalize Mr. Bonica’s scores and the OnTheIssues.org scores to give them the same mean and standard deviation as DW-Nominate.) The higher the score, the more conservative the candidate.

DW-Nominate scores normally run on a scale that goes from negative 1 for an extremely liberal candidate to positive 1 for an extremely conservative one. To make the result more legible, I have multiplied all scores by 100 — so that, for instance, a moderate Republican might have a score of 25 rather than 0.25. Mr. Rubio achieves a score of 51 by this method. What does that mean, exactly? 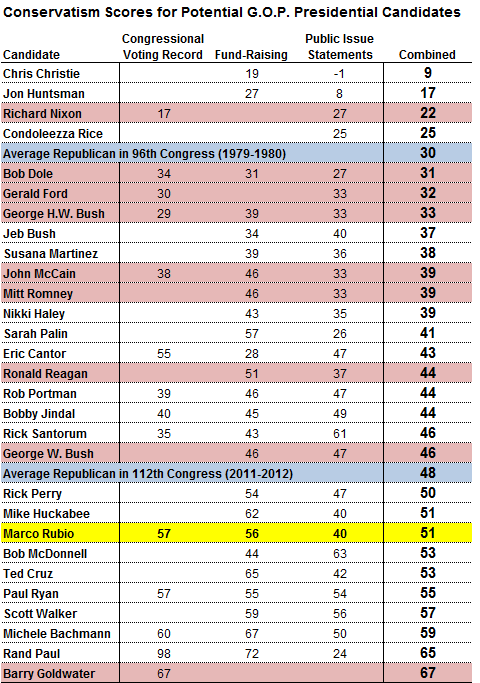 This is a potentially advantageous position for a Republican competing in the presidential primaries. In both parties, nominees have usually come from the center of their parties, rather than from the moderate or the “extreme” wings. There are exceptions: Mr. Reagan, although he would fit right into the Republican Party today, was much more conservative than most of his contemporaries in 1980. But in general, Mr. Rubio is pretty close to the sweet spot of where a presidential nominee might want to be.

There are some viable candidates to Mr. Rubio’s right. The 2012 Republican vice-presidential nominee, Representative Paul D. Ryan, rates a score of 55, slightly more conservative than Mr. Rubio. Scott Walker, the governor of Wisconsin, rates a 57.

Mr. Rubio, however, has had net-positive favorability ratings among the general electorate in the most recent surveys, whereas the Republicans to his right usually have not. Mr. Ryan’s favorability ratings, for example, wound up being about break-even after the 2012 campaign.

This is not to say that Mr. Rubio is extraordinarily popular. Gov. Chris Christie of New Jersey has favorability ratings that are much stronger than Mr. Rubio’s, for example. Mr. Christie rates as being far more moderate by these statistical methods, however, having broken with his party not just on immigration, but also on issues like gun control and environmental policy, which could be a problem for him with Republican primary voters. (If nominated by the Republicans in 2016, he might possibly be the most moderate major-party nominee since Dwight D. Eisenhower).

Other potential candidates, including former Gov. Jeb Bush of Florida and Gov. Susana Martinez of New Mexico, are close to Mr. McCain and Mr. Romney on the ideological spectrum.

Isn’t it premature to draw attention to a candidate’s popularity so far in advance of the primaries? Certainly, a great deal will change between now and 2016.

But long before Republican voters in Iowa and New Hampshire cast their ballo
ts, the potential nominees will be competing against one another in the so-called “invisible primary.” In this stage, which is already under way, they hope to persuade party insiders that they represent the best path forward for Republicans in 2016. The more successful they are at doing so, the more they will be rewarded with money, endorsements and the talent to run their campaigns, giving them a huge advantage once voting actually does begin three years from now.

Mr. Rubio’s most persuasive pitch to Republican Party insiders may well be that he is more popular than other, ideologically similar candidates. Some of those candidates, like Mr. Ryan, can probably offer a richer intellectual defense of conservatism, or can claim to have been better vetted. Several others, like Gov. Bobby Jindal of Louisiana, have more executive experience. Mr. Rubio’s relatively favorable public image represents his comparative advantage. (There are also the facts that Mr. Rubio is Hispanic and is from Florida, but these advantages boil down to electability as well: the possibility that he might help Republicans make gains with Latinos, and that he could give them a lift in an especially important swing state.)

What makes matters tricky for Mr. Rubio is that, at the same time he is hoping to persuade Republican party insiders that he deserves their support, he will also need to maintain a reasonably good image with the broader electorate lest his electability argument be undermined. This may lead to some strange positions, such as when Mr. Rubio recently critiqued President Obama’s immigration proposal despite its many similarities to his own.

When the wider electorate learns that Mr. Rubio’s positions are in fact hard to differentiate from those of other conservative Republicans, will his favorability ratings turn mediocre, as Mr. Ryan’s now are?

This is not meant as a rhetorical question. One measure of political talent, and something that characterized both Mr. Reagan and Mr. Obama, is the ability to sell ideas to voters across a wide range of the political spectrum. Perhaps Mr. Rubio will prove to be such a talent. Otherwise, if Mr. Rubio holds a fairly ordinary (and conservative) set of Republican positions, his popularity ratings may wind up being ordinary as well.