My colleague Harry Enten wrote Thursday about Jeb Bush, the former Florida governor, and his prospects of winning the Republican nomination in 2016. Harry reviewed the political science research and concluded that, in a wide-open GOP field, Bush’s chances are about as good as any other Republican’s.

The case against Bush, as articulated by Ben Smith of BuzzFeed, turns mainly on the notion that Bush’s moderate stances on immigration and education could prove problematic in the primaries.

According to the polls, however, Republican views on both issues are more flexible than Smith and other news media commentators might assume. This post will look at the polling on education reform — specifically, support for the Common Core, which Bush has championed and which sets a set of recommendations for what students should know in kindergarten through high school. We’ll look at the immigration numbers in a subsequent post.

But the Associated Press and the NORC Center for Public Affairs Research last year conducted a poll on education that included a series of questions on the Common Core. One conclusion is that Americans don’t know a whole lot about it — only 26 percent of respondents said they’d heard a “great deal” or a “lot” about Common Core, as compared with 52 percent who said they’d heard little or nothing about it.

The poll then provided a brief description of the Common Core and asked respondents for their opinion about it:

Most states have adopted the Common Core State Standards in mathematics and English language arts. The objective of the Common Core is to provide consistent, clear standards across all states for students in grades K-12.

The poll’s top-line numbers didn’t detail the partisan split in opinion on the Common Core, but I was able reconstruct them by looking at the microdata files that the Associated Press and NORC provided. Those numbers are as follows: 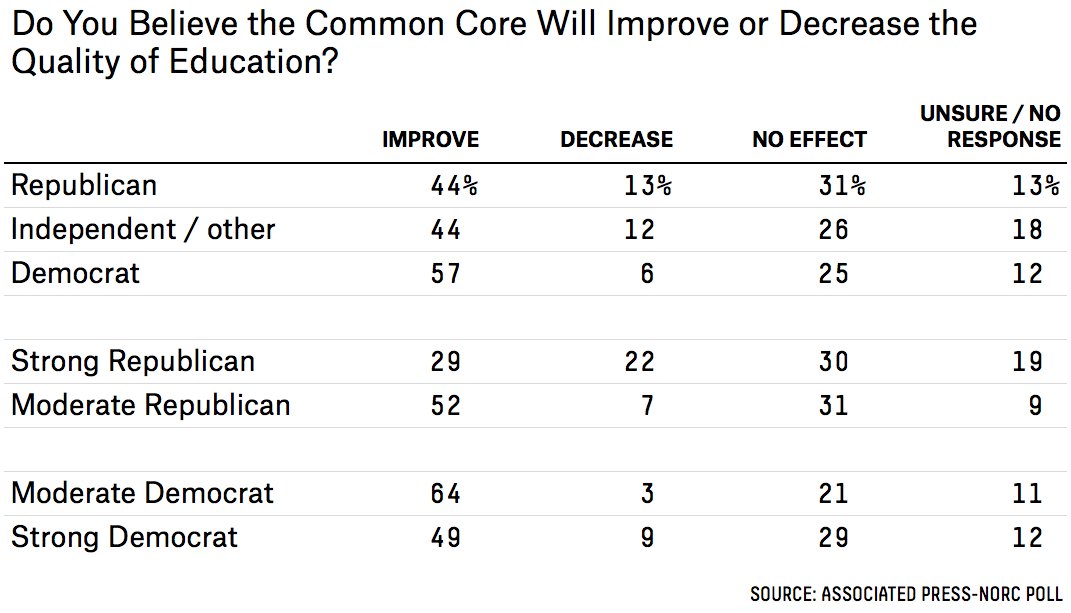 As you can see, the partisan split is not terribly strong on the Common Core. Among Republicans, 44 percent said they thought the Common Core would improve the quality of education, against 13 percent who said it would make things worse. (Another 44 percent either said they thought it would have no effect or had no opinion.) The numbers among independents and voters unaffiliated with a political party were nearly identical to the Republican figures.

Democrats were modestly more likely to be in favor of the Common Core: 57 percent said they thought it would improve educational quality as compared with 6 percent who said it would produce a decline. Still, the partisan split on this issue is mild as compared to most others.

But what about the strongest Republicans, such as those that might participate in the primaries and caucuses in some of the most conservative states?

So there is some debate within the GOP on the Common Core. But even self-described “strong” Republicans are more likely to think it improves rather than harms educational quality. And relatively few Americans of any political description have strong feelings against it.

Of course, precisely because opinions on the Common Core aren’t all that firm, the politics of it could evolve between now and 2016. Perhaps by that time, a set of voluntary educational guidelines will have come to symbolize an unacceptable intrusion of big government in the mind of GOP primary voters.

If that’s the party’s mood, however, Republicans are likely to nominate an exceptionally conservative candidate who might undermine the party’s chances in the general election. In other words, the universe where the Common Core is a big problem for Bush is one where he had no chance to begin with. In most other universes, Bush’s support of the Common Core should be somewhere between benign and modestly helpful for him.