After a summer in which the polling in the presidential race was exceptionally stable — with President Obama generally holding a lead of about two percentage points in national surveys — the numbers since the party conventions have been a wild ride.

Mr. Obama got a bounce coming out of Charlotte, and it had some staying power — with his national lead appearing to peak at about five or six percentage points. But polling released immediately after the debate seemed to suggest that Mr. Romney had drawn into a rough national tie.

By the weekend, however — after the release of a favorable jobs report last Friday — Mr. Romney’s bounce seemed to be receding some. Tracking polls released on Monday by Gallup and Rasmussen Reports actually showed a shift back toward Mr. Obama, although another poll by Pew Research showed Mr. Romney with a four-point lead among likely voters.

Polling data is often very noisy, and not all polls use equally rigorous methodology. But the polls, as a whole, remain consistent with the idea that they may end up settling where they were before the conventions, with Mr. Obama ahead by about two points. Such an outcome would be in line with what history and the fundamentals of the economy would lead you to expect.

Because economic data can be as noisy as the polls, the FiveThirtyEight forecast model uses seven different economic statistics to calibrate its predictions. Some of these make a more favorable case for Mr. Obama than others. The stock market has shown very strong growth over the course of his term, especially in the past six months. Inflation has been low, although gas prices have sometimes been an exception. And the manufacturing sector of the economy has been reasonably sound.

G.D.P. growth, however, has been sluggish — and growth in take-home income has been worse, barely keeping up with population growth. Although consumer spending on some products like cars is up, a broader-based measure called personal consumption expenditures shows that Americans aren’t spending all that much.

The one measure that has been closest to the consensus of the data, however, is jobs growth, as measured by the increase in nonfarm payrolls. (This should be distinguished from the unemployment rate, which is calculated through a separate survey and which is subject to a higher degree of statistical error.)

The economy has added an average of 146,000 jobs per month so far this year, according to the government’s latest figures. That is slightly higher than the average gain in past election years. Since 1956, monthly job growth has averaged 135,000 in January through September.

However, because the population and the labor force are now larger than they once were, the economy needs to add more jobs to keep pace with it. As measured on a percentage basis, jobs have grown by 1.0 percentage points since December, slightly below the election-year average of 1.4 percent.

A more systematic way to analyze the data is to chart the rate of jobs growth against the margin of victory or defeat for the incumbent party. If past trends hold, that analysis predicts a very narrow victory for Mr. Obama — by 2.1 percentage points over Mr. Romney, similar to Mr. Bush’s margin of victory in 2004. 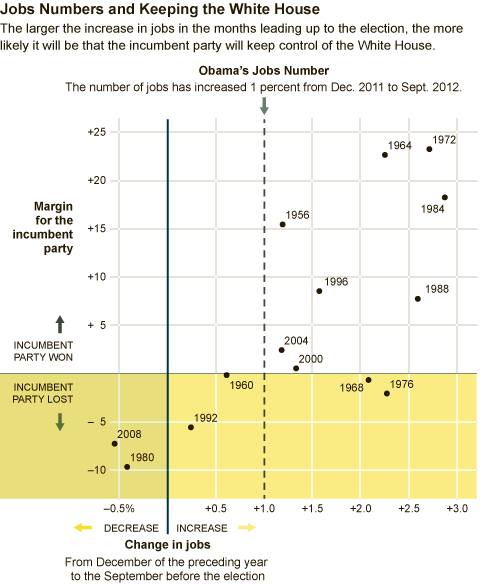 But the exact math is probably not as important as the broader conclusion: that the economy is line with Mr. Obama being a very modest favorite.

Had Mr. Obama been on track to win by five or six percentage points, then we could say that Mr. Romney was underperforming the fundamentals.

In Denver, however, Mr. Romney presented himself as an acceptable and competent alternative. Challengers also generally profit from the first debate: in 8 of the 10 election cycles since 1976, the polls moved against the incumbent, and a net gain of two or three percentage points for the challenger is a reasonably typical figure.

In some ways, then, the election might not be quite so unpredictable as it appears. There was reason to believe that Mr. Obama’s numbers would fade some after his convention — and the first debate has quite often been a time when the challenger drew the race closer.

A version of this article appears in print on 10/09/2012, on page A10 of the NewYork edition with the headline: Following the Job Numbers, as Well as Bouncing Polls.