We’re a long way from knowing who will be the Republican nominee for president in 2016. Early polling data, however, can give us a sense for who fits the profile of past nominees, and who doesn’t.

Since 1980, two types of candidates have won presidential nominations when an incumbent president wasn’t running in their party: those who were unfamiliar to voters early in the campaign, and those who were both well known and well liked.

Chris Christie, the Republican governor of New Jersey, is well known but not particularly well liked.

In the chart below, I’ve matched the net favorability rating (favorable rating minus unfavorable rating) of every major party nominee among their party’s members since 1980 against the percentage of party members who could form an opinion of them during the first six months of the year before the primaries. 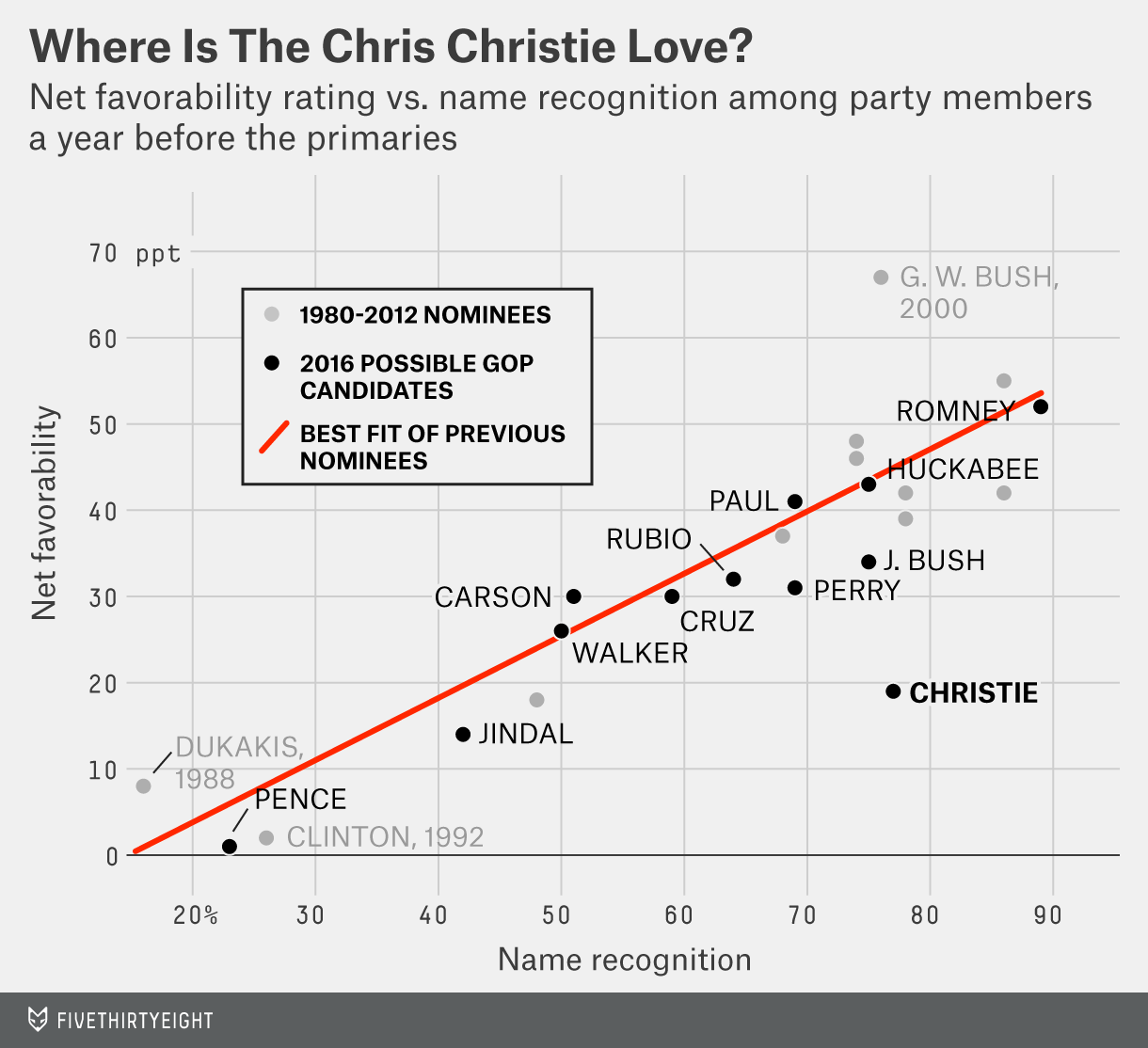 Some nominees, such as Democrats Michael Dukakis and Bill Clinton, weren’t well known at this point in the campaign. Some, such as Republicans Bob Dole and Ronald Reagan, were very well known and popular. There was George W. Bush in 1999, who was particularly well liked, even if he wasn’t universally known. But no prior nominee had a net favorability rating more than 10 percentage points below where you’d expect given his name recognition.

Just as troubling for Christie: The other plausible Republican candidates (who have been included in at least one poll) fall in line with the public profile of past nominees. Mitt Romney has a very high net favorable rating among Republicans, which you’d expect given how well known is. Bobby Jindal and Mike Pence aren’t well known and have relatively low net favorable ratings. Jeb Bush’s and Rick Perry’s net favorability ratings are 10 and 9 percentage points below where’d you expect, respectively, but that’s within a standard deviation of the forecast. Reagan was in a similar position at this point in 1979.

Christie’s net favorable rating is more than two standard deviations below what we’d expect from a candidate like him.

Now, perhaps Christie will buck the trend. Our data set includes only 12 past primaries, and this year’s Republican race is historically divided. I, however, would bet against it. Christie’s relatively low popularity is one of the main reasons my colleagues at FiveThirtyEight and I aren’t very high on his chances of capturing the Republican nomination.