There’s still plenty of room for Marco Rubio. Two years ago, I described the Florida senator as the “electable conservative.” While Rubio has taken fewer tangible steps toward officially running for president than rivals like Jeb Bush and Scott Walker, he still does reasonably well by that rubric. Perhaps along with Walker, he can make the most credible case for meeting William F. Buckley’s standard as the most viable conservative candidate.

Let’s formalize our understanding of this a bit. In economics, there’s a concept known as Pareto efficiency. It means that you ought to be able to eliminate any choice if another one dominates it along every dimension. The remaining choices sit along what’s called the Pareto frontier.

I’m not here to tell you whether it’s going to be a 12-sack of sliders for $2.99 or a 12-course tasting menu for $299. In fact, I don’t need to know anything about how you weigh taste and price. But I can at least eliminate some other choices for you. 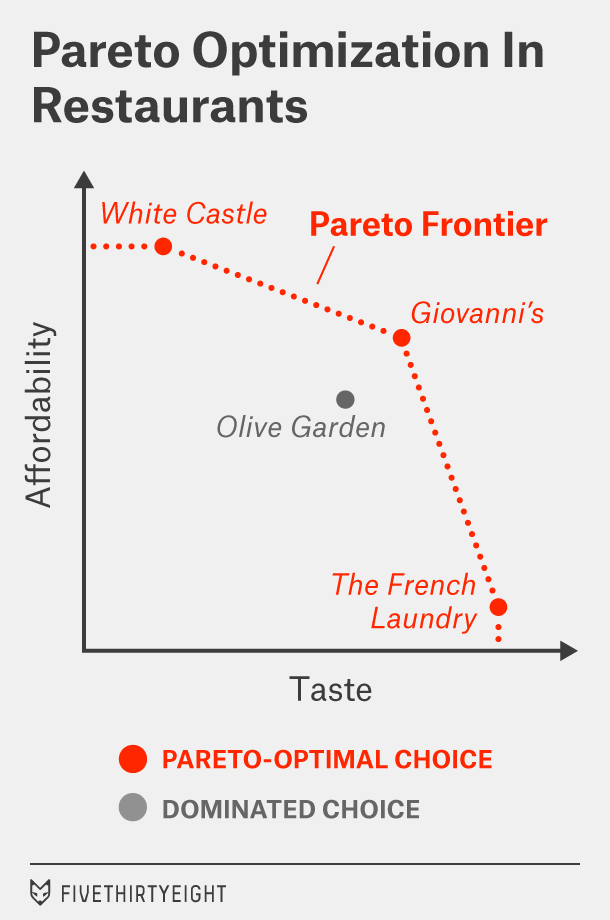 You’ve probably inferred how we might apply this to presidential candidates. In this case, the dimensions, following Buckley’s lead, are electability and ideological “fit.” (For the most part, ideological fit means being more conservative in the case of a Republican and more liberal in the case of a Democrat. But there are some candidates who might be too conservative or too liberal even for their party bases.)

Below is a semi-hypothetical conception of the 2012 Republican field with this distinction in mind. (By semi-hypothetical, I mean that the placement of the candidates isn’t totally arbitrary but also isn’t determined by any hard-and-fast formula.) It conceives of Mitt Romney, Tim Pawlenty and Rick Perry as Pareto-optimal candidates, with the other candidates, like Newt Gingrich, dominated by at least one of these choices. 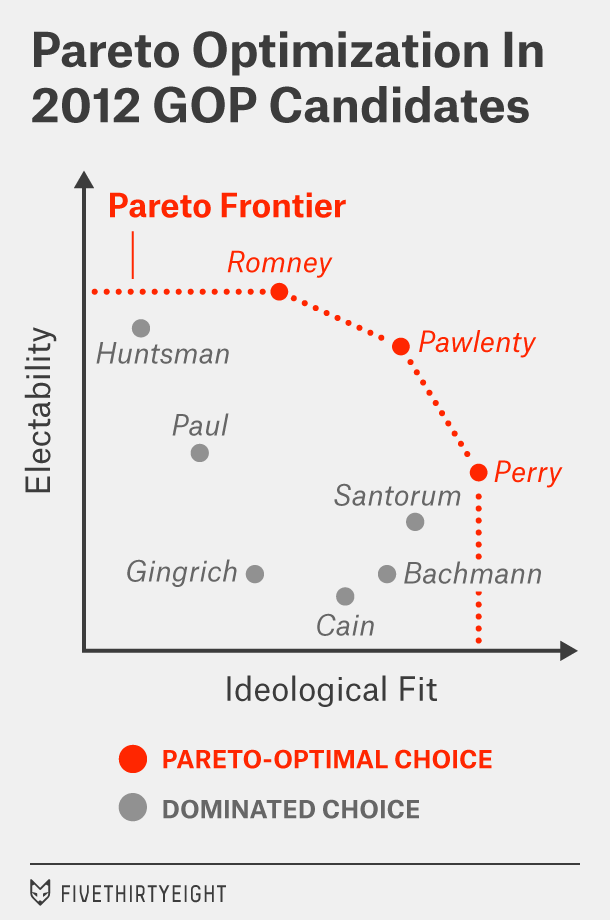 It’s easier to produce one of these charts with the benefit of hindsight, of course. For now, the positions of the 2016 candidates are a long way from being defined. But there’s some preliminary evidence that Bush is vulnerable on the ideology dimension, without being particularly strong on electability. It’s easy to imagine Republicans preferring Rubio to Bush in a two-way race. Defeating Walker could be a tougher task for Rubio, but Rubio could remain a Pareto-optimal choice if he were seen as the more electable of the two.

Ideological fit is probably the easier of the dimensions to measure at this stage. This is an experienced and well-credentialed Republican field, and the candidates have left a lot of clues behind about where they line up on the issues. One technique is to look at the various statistical systems that measure ideology on the basis of policy statements, congressional voting records and other factors. As I wrote two years ago, that analysis comes out looking pretty good for Rubio. He’s quite conservative, but not ultraconservative — instead he’s close to the median of Republicans who have been elected to Congress in recent elections.

Another way is to talk to Republican voters directly — or at least to poll them, as The Des Moines Register and Bloomberg Politics recently did in Iowa. That poll asked potential Republican caucusgoers whether they saw each of their candidates as “too conservative,” “too moderate” or “just right.” I’ve re-created that data below, removing voters who said they weren’t sure about the candidate from the sample. 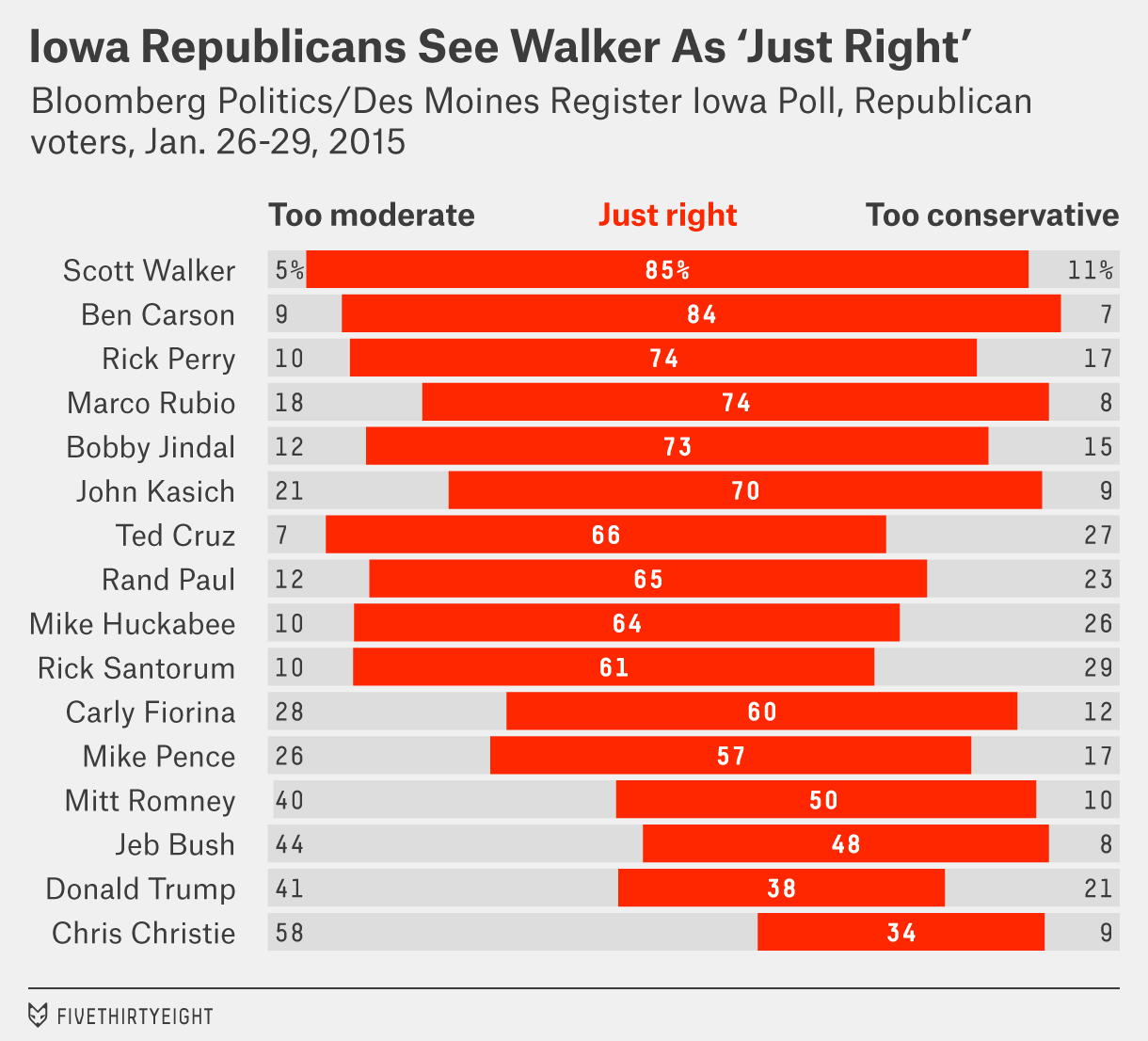 These numbers look really good for Walker. Among voters with an opinion about him, 85 percent rated his ideological views as “just right,” the highest in the Republican field. But Rubio isn’t far behind; 74 percent of voters described him the same way, placing him in a tie for third place with Perry. Most of the difference is because 18 percent of Iowa Republicans think Rubio is “too moderate,” versus 5 percent who say that of Walker. But in other states like New Hampshire — where the Republican electorate is more moderate — the advantage could tip to Rubio instead.

By contrast, Bush’s numbers are awful in the Iowa poll, with only 48 percent saying he is “just right.” Chris Christie’s are even worse — behind even Donald Trump’s.

What about electability? We know less about that so far. Head-to-head polls comparing Republican candidates against Hillary Clinton are tests of name recognition as much as anything else at this stage. For now, arguments about electability will mostly be made among those Republican elites who make up the invisible primary and who may not want to donate to or endorse a candidate they perceive to be a general-election loser.

But let’s take a very cautious look at favorability ratings among the broader electorate, which if nothing else could affect the perception of these elites. Huffington Post Pollster has favorability-rating data on eight potential Republican candidates. For each one, I’ve computed a Real Clear Politics-style polling average, meaning that I’ve taken the most recent survey from each polling firm and averaged them together.1 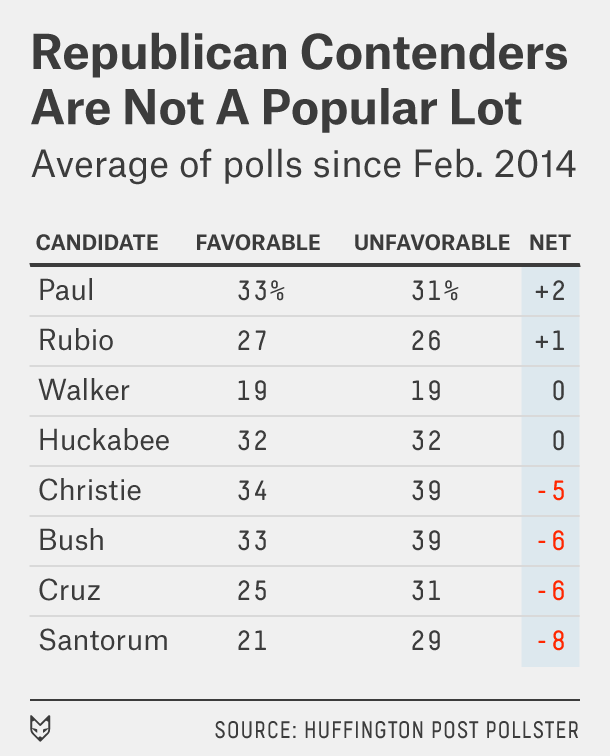 Let me be really careful here. These numbers don’t look great for Republicans, but they can change. To a first approximation, it’s best to assume that next year’s general election race is a 50-50 proposition. And Clinton’s favorability ratings — which would be 51 percent favorable and 42 percent unfavorable by this method and which have gradually been falling — aren’t so hot either.

Still, the eight Republicans listed here either qualify as relatively unknown or relatively unpopular. For Rubio and Walker, who at least have break-even favorability ratings so far with a lot of room to define themselves, that isn’t too much of a problem. For Bush and Christie, though, it could be. Both are fairly well-known to voters, and yet both have net-negative favorability ratings.

This is unusual because normally candidates who are closer to the center of the electorate, such as Bush and Christie, fare better among general-election voters. It’s possible that some of Bush’s poor ratings have to do with his last name; some voters may even confuse him with former President George W. Bush. As Jeb Bush becomes better known, voters will have new information with which to evaluate him and may find him more likable. Christie’s problems may be a little more intractable.

But either way, Bush and Christie are going to have more trouble making the electability argument than relatively moderate candidates usually would. Christie, in particular, is close to being the worst of all worlds, viewed as an ideological misfit by Republicans while being among the least popular Republicans with general-election voters. On the Pareto chart, Christie and Bush are at more risk of being dominated than dominating other candidates.

Rubio and Walker, being lesser known, have more chance to shape their image. And they can make some electability arguments of their own. In Rubio’s case, it’s about being a Hispanic candidate from a swing state with a good life story; in Walker’s, it’s about having been elected in a blue-leaning swing state three times in four years.

They also have vulnerabilities. Walker so far has not gotten a great reception from the mainstream media, which is fond of playing up the “crazy tea partyer” characterization of him. Pushing back against alleged or actual media bias is a part of the Republican playbook, but it requires some dexterity; it worked well for George W. Bush but not so well for Sarah Palin in the end, for instance. Rubio, for his part, has not shown a lot of political dexterity either, having lost more than he gained when he advocated for immigration reform.

But Rubio may have been right last week when he said he wasn’t running against Bush. It’s possible that Bush will be easy for Republicans to eliminate, leaving Rubio and Walker running against each other.