In a series of articles last week, the writer Megan McArdle asserted that Republicans have about a 75 percent chance of winning the White House in 2016. “Mostly, the White House flips back and forth like a metronome,” she wrote. “Voters just get tired after eight years.”

As other commentators, like Henry Farrell, have pointed out, one can find almost any pattern in presidential results if one looks hard enough. By manipulating the definition of incumbency, the time frame that one examines or the measure of success (e.g., the popular vote or the Electoral College), or by selectively excluding “outliers” or exceptional cases, the potential for cherry-picking and overfitting is high. (In layman’s terms, an overfit statistical model is one that is engineered to match idiosyncratic circumstances in past data, but which is not an accurate picture and makes poor predictions as a result.)

But let’s evaluate a relatively simple version of Ms. McArdle’s claim. What has happened, historically, after the same party has controlled the White House for exactly eight consecutive years?

Since the Republican Party first nominated a presidential candidate in the election of 1856, ushering in the modern two-party system, this circumstance has occurred either 11 or 12 times. The ambiguous case is in 1868. Abraham Lincoln, the great Republican president, had been assassinated and was succeeded by Andrew Johnson, his vice president, who is variously defined as a Democrat; as a member of the National Union Party, which Lincoln temporarily established in 1864; or as having no party affiliation.

Excluding 1868, the incumbent party has won the popular vote in 5 of these 11 cases, and the Electoral College in 4 of the 11 cases. Including 1868, when Ulysses S. Grant won a third consecutive election for Republicans but directly succeeded Johnson rather than Lincoln, the incumbent party’s track record improves to 6-of-12 in the popular vote and 5-of-12 in the Electoral College.

Depending on your definition, then, the incumbent party’s success rate in these elections has been anywhere from 36 percent (4 out of 11) to 50 percent (6 out of 12). Perhaps you could argue that Republicans’ odds of winning in 2016 are slightly better than 50 percent on this basis, but claiming that their odds are as good as 75 percent, as Ms. McArdle does, doesn’t seem to have any justification in this evidence.

However, as Jonathan Bernstein writes, looking at wins and losses in such a binary way is probably not the best way to evaluate the evidence. Many United States elections, as in 2000 and 1960, have essentially been ties, where the most minor variations in the flow of the campaign might have changed the winner of the Electoral College or popular vote. With this in mind, it is better to examine margins of victory.

Incidentally, this is close to a universal principle of statistical analysis. It’s almost always more robust to evaluate the margin by which a given outcome occurs than to look at the variable as black or white, win or loss, hit or miss, on or off.

My point is not that the incumbent party actually has an advantage after two consecutive terms in office. (Some statistical models assume that it does, which I regard as just as questionable a claim as Ms. McArdle’s.) Instead, I’d make the more modest assertion that its odds of winning a third term are, on first approximation, 50-50.

This helps to put President Obama’s win last year into context. How did he manage to be re-elected despite a below-average economy? Well, Mr. Obama’s margin of victory was also below average compared with the most similar incumbents in the past. If the average first-term incumbent wins by eight or nine percentage points, you can have quite a few things go wrong and still win by some margin. 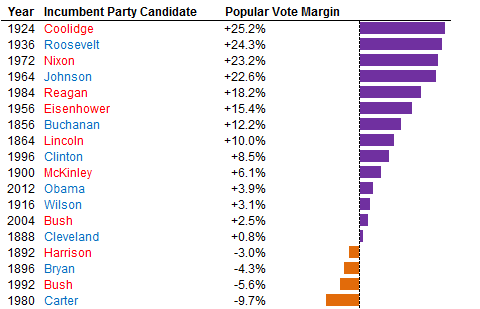 What about when a party has won three or more consecutive elections and seeks yet another term? If Ms. McArdle’s fatigue hypothesis is correct, we might expect the incumbent party to do exceptionally poorly in these cases. (If eight years are enough to tire out voters, then 12 or 16 or 20 certainly ought to be.)

However, the incumbent party’s track record in such cases is not all that bad, historically. Republicans won six consecutive elections from 1860 to 1880 (with some caveats: Lincoln’s term was interrupted, and Rutherford B. Hayes won the Electoral College in 1876 despite losing the popular vote). Democrats won five consecutive elections from 1932 to 1948. On average, the incumbent party has lost the popular vote in these cases, but only by 1.3 percentage points — essentially a tossup.

On first approximation, then, presidential election results have resembled a random walk, with the important exception that an incumbent party has had a significant advantage when it has held exactly one term in office. I am suspicious of the patterns that people claim to identify beyond that, which may reflect the human bias toward detecting signal in random noise.

That’s not to say there are no further complications.

One major question, for instance, is whether the one-term incumbency advantage pertains to the president himself or to his party. The evidence in Congressional elections, for what it’s worth, mostly points toward the incumbent himself mattering. When an elected incumbent retires from the Senate in a swing state, for instance, the odds of his party’s winning the next election are roughly 50-50 — not much better (as would be the case if there were residual benefits for the incumbent’s party even after the incumbent himself retired) and not much worse (as might be the case if voters were fatigued by having the same party in office).

Also, appointed senators have a fairly poor track record compared with elected incumbents. Perhaps Congressional voting is not quite the same as presidential voting, but the data set is a lot more robust (with hundreds and hundreds of cases as opposed to a couple dozen), so it is worth some consideration — and it, too, points to 50-50 as the right baseline in an open-seat election.

Thinking carefully about these baseline tendencies is important, because in some ways the 2016 election will be unprecedented.

What do I mean?

Presuming that Mr. Obama serves out the remaining three and a half years of his term, he will be only the fifth president prevented by the 22nd Amendment from seeking further terms in office. The other four cases were Dwight D. Eisenhower in 1960, Ronald Reagan in 1988, Bill Clinton in 2000 and George W. Bush in 2008. Those four elections resulted in one clear loss for the incumbent party (2008), one clear win (1988) and two very close elections. But these are only four cases and so do not tell us much one way or the other.

It might be said that there was a de facto two-term limit before there was a constitutional one — in other words, that presidents almost always respected the two-term precedent that George Washington established. In that case, we could also look to cases where a president voluntarily retired after two consecutive terms as precedents for 2016.

But this is not really true. From the late 19th century through the ratification of the 22nd Amendment in 1951, many presidents who were able to run for a third term showed some interest in one.

Franklin D. Roosevelt ran for and won third and fourth terms. Grant sought a third term (although not a third consecutive one) in 1880 and was nearly nominated before Republicans chose James A. Garfield instead on the 36th ballot. Woodrow Wilson, some historians now claim, was interested in a third term, but Democrats weren’t interested in nominating him. Theodore Roosevelt ran for a third term in 1912, although as a member of the Progressive Party rather than the Republican Party. Harry Truman, who was exempt from the 22nd Amendment, initially sought a third term in 1952 but withdrew after the New Hampshire primary.

These distinctions matter because, unless a president is legally prevented from running for a third term, there are selection effects to which ones decide to do so. Popular presidents might seek and win another nomination, while unpopular ones might retire or be rejected by their party. It could be that voters react differently to parties seeking third terms in the era of the 22nd Amendment than they did in the years before it, and that the incumbent party’s batting average will wind up being meaningfully higher or lower than 50 percent in the long run. But we have little empirical evidence for this yet.

Instead, some humility is called for when interpreting the evidence. On the eve of an election — when the polls have become very reliable, and we know the identities of the candidates and something about the state of the economy and the mood of the country — it is possible to make relatively bold and precise forecasts about the outcome. But none of this applies three and a half years in advance.