Texas Sen. Ted Cruz’s newly minted presidential campaign is the media equivalent of a juicy rib-eye that robbers use to distract a guard dog during a heist. He’ll get a ton of media attention, and he’ll get to spread his message — which may be all that Cruz is after — but Cruz almost certainly has no shot of winning the nomination, according to every indicator that predicts success in presidential primaries.

First, Cruz doesn’t have enough support from party bigwigs. To win the Republican or Democratic nomination, you need the backing of at least some of the party apparatus. At a minimum, your fellow party members shouldn’t hate you. Otherwise, you end up getting the Newt Gingrich 2012 treatment. That is, you get pounced on the moment you’re seen as a threat to win the nomination.

If we’re ever in a world where it looks like Cruz could win the nomination, you’ll very likely see such pouncing. You can read article after article about how Cruz has isolated himself in the Senate. It got so bad that he recently had to apologize to his Republican colleagues.

And the Cruz hatred doesn’t stop at the edges of the Senate cloakroom. Influential party actors dislike him, too. I can’t remember another Republican who united Ann Coulter, Pat Robertson, Jennifer Rubin and Thomas Sowell in opposition.

That isn’t to say that Cruz is universally hated in Washington. He has a fan base in the very conservative House GOP caucus. House Republicans have, in fact, been egging Cruz on. The problem for Cruz is that endorsements from this group are likely worth about one-third to one-half as much as those from major statewide officials. Representatives usually have very little statewide sway, and most Americans cannot even name their representative.

Second, Cruz has an electability problem. You can see this on two fronts: ideology and polling.

Cruz is likely far too extreme ideologically to win the nomination. The Republican party has a habit of nominating relatively moderate candidates (see John McCain in 2008 and Mitt Romney in 2012). That’s especially the case when the party has been out of the White House for more than one term. A Cruz nomination wouldn’t just break this streak; it would throw it off a 100-floor balcony and drop a piano on it.

Cruz is more conservative than every recent nominee, every other candidate who mounted a serious bid in 2012 and every plausible candidate running or potentially running in 2016. Let’s look at three ideological measures: DW-Nominate common-space scores (which are based on a candidate’s voting record in Congress), fundraising ratings (based on who donates to a candidate), and OnTheIssues.org scores (based on public statements made by the candidate). As my colleague Nate Silver has previously noted, these measures aren’t perfect, but together, they give you a fairly good idea of where a candidate stands. 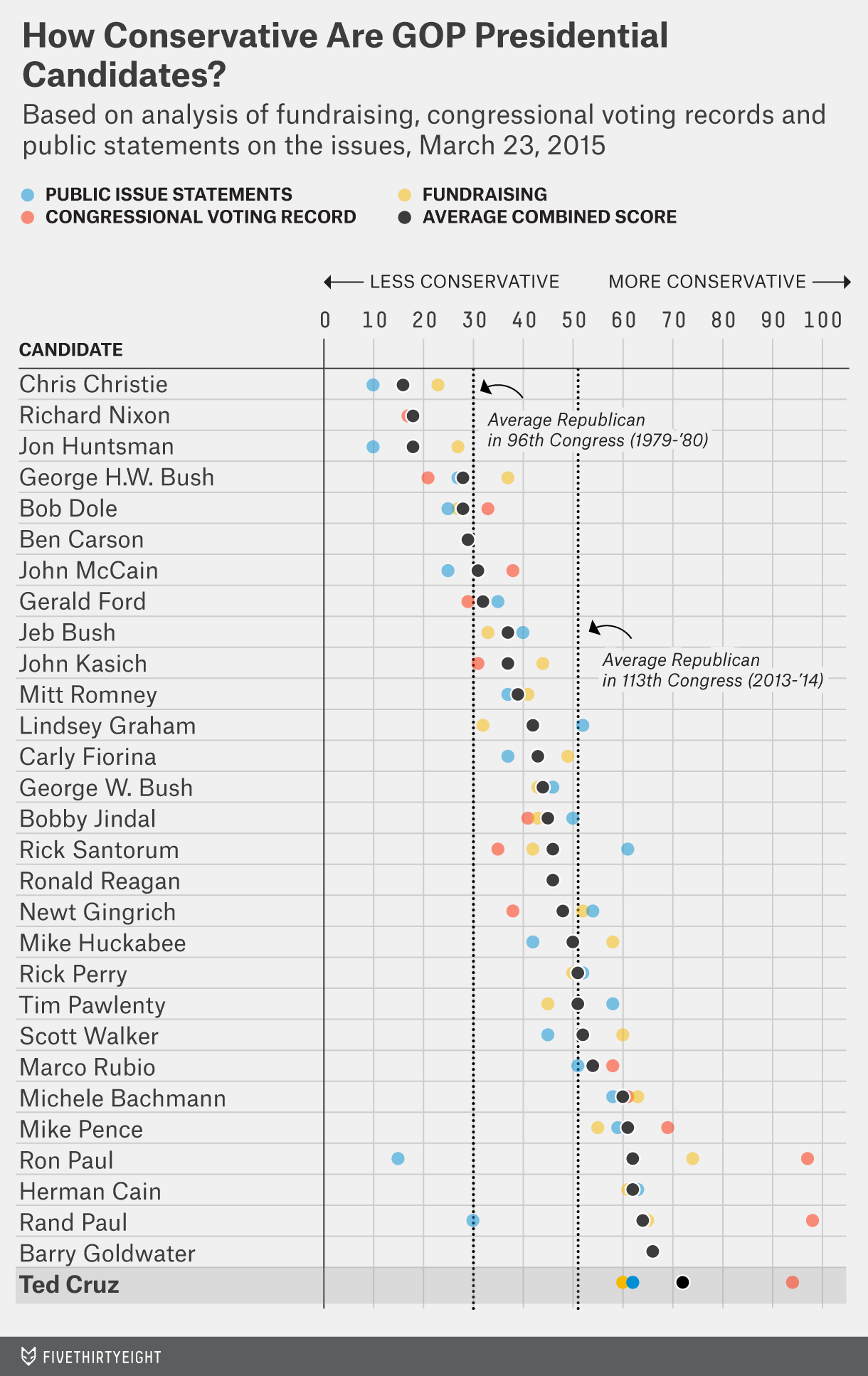 Cruz is the first or second most conservative candidate on all three scales for former nominees and all the candidates running in the 2016 campaign. There really isn’t much disagreement about where to put Cruz on the left-right spectrum, especially compared with someone like Rand Paul, whose libertarianism creates a public statements score far more liberal than the other indicators.

Indeed, Cruz’s average conservatism score wipes all the other candidates away. There is less ideological space between Michele Bachmann and Marco Rubio than there is between Bachmann and Cruz. Cruz, for instance, has managed to earn a 96 percent rating from the Club for Growth in his two years in Congress, while Bachmann earned only an 88 percent during the same period. Cruz’s public statements can also be categorized as far more conservative than those of Wisconsin Gov. Scott Walker, who San Francisco State University assistant political science professor Jason McDaniel argued was potentially too conservative to win the nomination.

And, importantly, the public doesn’t view Cruz as more moderate than he is; polling confirms Cruz’s electability problem.

This brings us to our third and final point: In addition to GOP politicians and the overall public, Cruz has been deemed unpresidential by Republican voters, too. In an average of the three live interview national primary preference polls taken over the past month, Cruz is in eighth place with just 5 percent. Can Cruz overcome this low percentage by being people’s second choice? I doubt it.

Last month, CBS News asked Republicans who they would consider for the Republican nomination. Here’s CBS’s chart of the results: 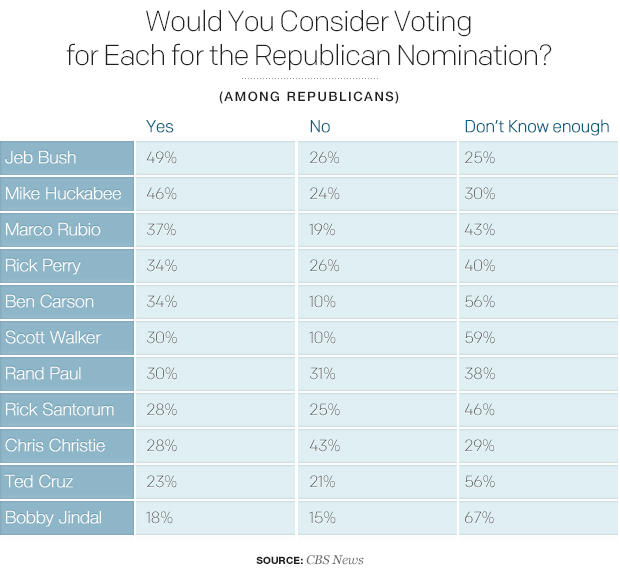 Cruz ended up with the second lowest “yes” rating and the third-lowest net rating (the percentage who said “yes” minus the percentage who said “no”) at +2 percentage points. The only candidates who had worse net ratings were Paul and Chris Christie, both of whom also have very little chance of winning the nomination. Marco Rubio, who is polling just ahead of Cruz at 6 percent nationally in horserace polls but is a serious contender for the nomination, has a much higher upside, with his “yes” percentage at 37 percent and net rating of +18 percentage points.

Importantly, Cruz’s numbers aren’t any better in Iowa, where he needs to do well. He’s also in eighth place there, at just 4 percent in the last three live interview polls. Cruz’s advisers have argued that he can cobble together enough social conservative and libertarian voters to win the nomination. First, very conservative voters account for only a third of all primary voters, so that seems like a flawed strategy. Second, it doesn’t even seem like Cruz is in a position to bring these groups together in very conservative Iowa.

In the same poll, Cruz has a favorable rating of 58 percent among voters who had a favorable view of Paul. Again, four other candidates had a better favorable rating among Paul fans. Cruz simply isn’t in that good of a position to pick up the slew of these voters if Paul falters down the road.

Put it all together, and you can see why I’m skeptical of Cruz’s chances. He doesn’t have a flaw in his candidacy — he has many. Now, Cruz is going to win some votes, and dominating the GOP’s conservative wing — with press, prestige and money — would be incredibly valuable for Cruz. But we can see why the betting markets give the chronically bad Houston Astros a better chance of winning the American League pennant than Cruz of winning the Republican nomination.