Throughout the 2014 campaign, we kept hearing that Republicans were going to do well because of the “map.” To take back the Senate, all they had to do was win seats in six states (Alaska, Arkansas, Louisiana, Montana, South Dakota and West Virginia) that voted against President Obama in 2008 and 2012. Even before Election Day, Obama blamed the map for the impending misfortune of the Democratic Party.

It’s time to give the map argument a rest. Even if you control for the fact that a large number of races took place in red states, the Republican performance was the fourth-best by either party in the 17 Senate cycles since 1982.

How did we come to this conclusion? We compared the margin of victory1 in almost every Senate race since 19822 with two factors: the presidential vote margin for the previous two elections3 in the states with Senate contests, and whether the incumbent was running. We expect a party’s Senate candidates to do better in states it won in presidential elections. And we assume incumbents will do better than non-incumbents. For any given year, we compared how well the average senator for each party out- or underperformed this simple model.

The model doesn’t aspire to predict race outcomes perfectly. It looks at how much of the outcome in a given race can be explained by factors other than campaign effects (candidate quality, fundraising and so on). By focusing on the margin of victory instead of just on who won, we control for the possibility that one party gets lucky and wins a lot of seats by slim margins. Additionally, by looking at the average candidate in a given year, we can be sure we’re not thrown off by a party that outperforms in one or two races. In our model, a party has to do well in a large number of races for a year to be considered above average.

In 2014, Republicans did exactly that. The average Republican candidate for Senate outperformed what we would have expected given the map by 8.5 percentage points. This graphic plots how well the average Senate candidate did versus what the model expected. It shows that the Republican performance in 2014 rivals other big waves of the past. 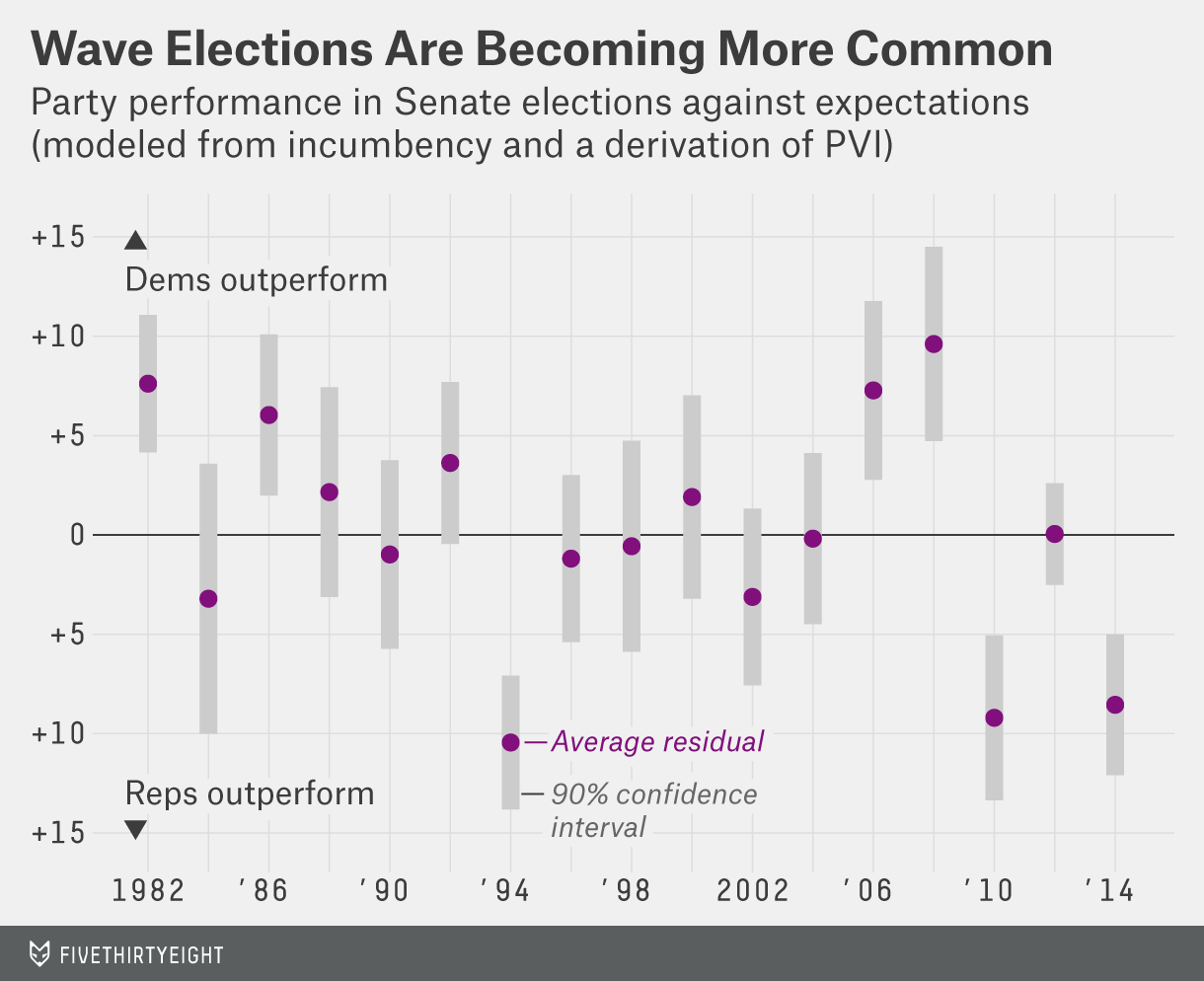 Not surprisingly, the historic 1994 wave ranks as the biggest in the past 32 years. Only in 1994, 2008 and 2010 did the average Senate candidate for one party outperform by more than he or she did in 2014. Other wave years include 19824 and 2006, though Republicans did slightly better this year than Democrats did in those years.

This year was different from other wave years because of the unusually strong influence of the presidential vote in individual states in the last two cycles. It explained over 75 percent of the variation in results across the races this year. That’s the highest ever.

In other words, negative feelings towards President Obama almost entirely overwhelmed the incumbency advantage in 2014. That’s why Democratic Sen. Mark Warner — a former popular governor who won his seat by 31 points in 2008 — nearly lost in Virginia even though Obama won the state twice. Republican Thom Tillis beat Democratic Sen. Kay Hagan in the purple state of North Carolina. And in Iowa, which has voted just once for a Republican presidential candidate since 1984, Republican Joni Ernst beat Democrat Bruce Braley.

Still, it would be a mistake to say that individual candidates didn’t matter in 2014. Taking into account the fact that Republicans nationally outperformed as a group, a few candidates did considerably better than expected.

— Alaska: Democratic Sen. Mark Begich recently conceded, but the state’s heavily Republican nature suggests he should have lost by closer to 10 percentage points than the actual 2. Begich was credited for running a strong campaign. It probably helped that many Alaskans tends to vote for incumbents, regardless of ideology.

— Colorado: Even with a weaker incumbent advantage nationally, Democratic Sen. Mark Udall underperformed given the slight Democratic lean of Colorado in the last two presidential elections. Udall should have won by mid-single digits instead of losing by 2 percentage points. A lot of the credit should go to Republican Cory Gardner, who ran arguably the best campaign in the country.

— Iowa and Michigan: These two states, both tinted blue in presidential years, went in completely different directions after Democratic senators retired. Aided by Braley’s comments about farmers, Ernst turned what the fundamentals suggested should have been a 1 percentage point to 2 percentage point victory into an 8.5-point win in Iowa. In Michigan, by contrast, Democrat Gary Peters was helped by a Republican opponent, Terri Lynn Land, who was invisible during the campaign. He should have won by low single digits, yet took the race by 13 points.

Given the national tide against Obama, however, most of the states that switched parties ended up with margins we would have expected. These include Arkansas, Montana, North Carolina, South Dakota and West Virginia.

The smaller-than-usual incumbency advantage pretty much doomed Sen. Mark Pryor of Arkansas and is likely to do in Sen. Mary Landrieu of Louisiana. Had they run in 2012, like Jon Tester of Montana and Joe Manchin of West Virginia, they may very well have won. Those candidates prevailed even though Obama lost both their states by double digits.

Indeed, if not for Obama’s unpopularity, Democrats may have won in a number of other tight races this year. They probably would have held on in at least Alaska and North Carolina. Given the closeness of the race in Colorado, Udall might not have gone down.

But 2014 wasn’t a normal year. Yes, the map helped the Republicans, but they did even better than the map would have suggested. Democrats would be mistaken to believe they lost in 2014 just because of which states were contested. The question going forward is whether Republicans can carry their success into 2016. The last two times Republicans benefitted from a wave (1994 and 2010) Democrats held onto the presidency two years later. Republicans had better hope history doesn’t repeat itself.