Three weeks ago, the Denver Broncos looked like an easy choice for the NFL’s best team after back-to-back impressive wins: a 42-17 thumping of the San Francisco 49ers (then the third-ranked team in our Elo ratings), followed by a 35-21 victory over the then-seventh-ranked San Diego Chargers. Since then, however, Denver has arguably been the coldest team in the league. Or at least, nobody has shed more points off of their Elo rating since the end of Week 8 than the Broncos (although the Carolina Panthers certainly seem to be trying their best to match Denver’s skid).

Denver’s record over that span — one win, two losses — hasn’t necessarily been its entire undoing. Unlike some of the other more frigid teams across the league, the Broncos have at least won a game in November. (Not to pick on Carolina again, but the Panthers haven’t won since the first week of October.) But the Broncos were also expected to win more — the pregame Elo ratings generated an expectation of 2.1 wins over their past three games. Our Elo point spreads figured Denver would take care of its November opponents by a collective 19.5 points; instead, the team has posted a -13 point differential.

The most damaging game of the Broncos’ season thus far was their most recent one, when they were upset by the St. Louis Rams. Losing 22-7 despite being favored by 6.5 points, the defeat cost Denver 43 points of Elo rating, the fifth-most Elo points any team has relinquished in a single game so far this season. (If you’re curious, the Cleveland Browns’ win over the Cincinnati Bengals ranks first in that department.) It also dropped the Broncos to fourth place in the current rankings, the lowest they’ve sat since right after they were shellacked by the Seattle Seahawks in the Super Bowl in February.

But all is not lost for the Broncos — in fact, from a making-the-playoffs perspective, hardly anything was lost. Although the losses to the New England Patriots and St. Louis were costly to the team’s chances of locking up one of the AFC’s top two seeds (and therefore a first-round playoff bye) and even of winning the AFC West (the Kansas City Chiefs are in hot pursuit), they were not particularly damaging to its postseason probability. The Broncos’ chances of making the playoffs have only declined from a practical certainty (96 percent) to a matter of high likelihood (85 percent) during the skid. And Denver still has the league’s third-best chance of winning the Super Bowl. So, despite the team’s recent lapses, fans can probably R-E-L-A-X. 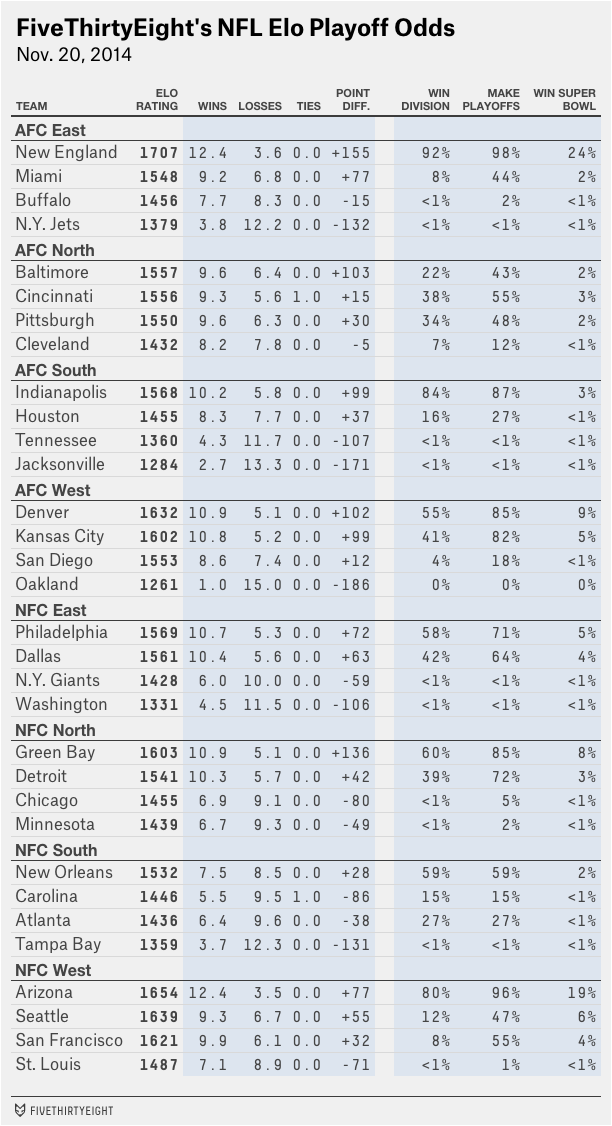 The bigger playoff concerns belong to Denver’s Super Bowl opponents a season ago: the Seahawks.

Before Week 8, we said the league’s defending champions were suddenly underdogs to return to the postseason … upon which the Seahawks promptly rattled off three consecutive victories, increasing their playoff odds to 61 percent. But on the heels of a loss in Kansas City, here we are again; our Elo simulations say the Seahawks have only a 47 percent probability of returning to the playoffs.

The 49ers, who bested the New York Giants last week, were clear beneficiaries of Seattle’s loss, tacking 14 percentage points onto their playoff probability as the Seahawks lost precisely the same amount from theirs. It was a fitting zero-sum transaction for last year’s NFC Championship Game contestants. At the start of the season, the NFC West was supposed to go to the Seahawks or the 49ers, with the runner-up at least being favorites to grab a wild card berth. But nobody counted on the Arizona Cardinals building on their surprising 2013 success and emerging as the division front-runners, the reality of which could leave either Seattle or San Francisco (or both?) out of the playoffs.

As Arizona increasingly runs away with the West (Elo gives the Cardinals an 80 percent chance of winning the division, granting that it doesn’t take Carson Palmer’s injury into account), it has become apparent that the Seahawks’ and 49ers’ only path to the playoffs might lead through one of the NFC’s two wild card slots. While our simulations say there’s a 72 percent probability that at least one NFC West team earns a wild card berth, there’s only a 32 percent chance that both wild cards emerge from the division. Most likely, one of the West runners-up will be left out — a fate that befalls Seattle in a slightly higher proportion of simulations than it does San Francisco. 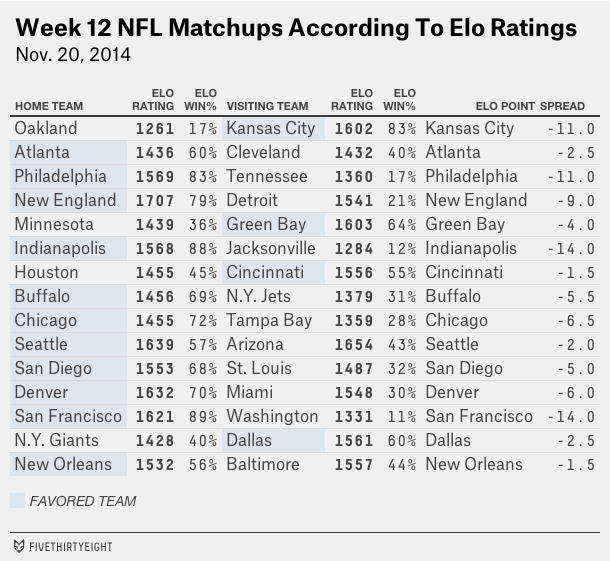 The Elo ratings again had a winning record against the gambling lines last week, but as we caution in every edition of this column, don’t take these numbers to Vegas and use them to place bets. Even in a lucky year, Elo hasn’t done well enough to turn a profit after the bookies take their vigorish.

At any rate, Elo seems to have a difference of opinion than Vegas when it comes to the aforementioned NFC West race. The consensus spread on this weekend’s big Arizona-Seattle tilt has Seattle favored by 6.5 points, while Elo only considers the Seahawks two-point favorites. Much of this probably stems from Seattle’s formidable home-field advantage, which is several points per game greater than the generic 2.6-point edge Elo gives home teams. But Vegas also rates Arizona much lower than Elo does — and that was true even before Palmer’s injury. The bookmakers are probably accounting for the Cardinals’ relatively unimpressive peripheral indicators, figuring their performance will come back down to earth.

Vegas also seems to devalue San Francisco relative to its Elo rating. Elo ranks the 49ers fifth, but their implied rating from the betting lines places them 11th in the league. This explains why, against a dreadful Washington team, San Francisco is favored by nine points instead of the two-touchdown edge Elo would predict.

Meanwhile, Vegas holds the Green Bay Packers in much higher regard than Elo does. While Elo ranks the Packers sixth in the NFL and has boosted their standing more over the past three weeks than all but three teams, the oddsmakers list them as 9.5-point road favorites against the Minnesota Vikings this week. Elo gives them a four-point advantage. That 5.5-point discrepancy is the biggest for any spread in Week 12, so it will be interesting to see whether the relatively high “K-factor” Vegas seems to be assigning to Green Bay’s recent dominance (to put it in Elo-equation terms) is appropriate.