NFL Playoff Implications, our weekly guide to what games matter, and whom they matter to, returns for Week 9 of the NFL season. For an explanation of the methodology, see here. The rankings behind these probabilities can be found here, at the co-author’s blog.

Week 8 of the NFL season was rough for the Carolina Panthers. On Sunday, they squandered a chance to steal a win against the suddenly vulnerable Seattle Seahawks, losing 13-9 at home. That night, the Saints — Carolina’s only NFC South rival of consequence — routed the Green Bay Packers 44-23. The Panthers’ lead in the NFC South is now so small it actually takes some arithmetic to determine that their 3-4-1 record is superior to the Saints’ 3-4 mark.

Going into Week 8, we estimated the Panthers’ playoff probability to be 55 percent.1 But with our latest simulations, that number has tumbled to 30 percent. Only about half of this drop can be attributed to game outcomes and resulting win-loss-tie records. The remainder of it is due to an update to the rankings (derived from Vegas point spreads), which has widened the gulf between the Panthers and the Saints.

But this week, the Panthers have an opportunity to claw back some of their losses. On Thursday night, they host the Saints at Bank of America Stadium in Charlotte. As you can see in the above charts, the Saints and Panthers each have 32 percentage points of playoff probability riding on this game. This is a remarkably large number at the midpoint of the season.

Several factors have combined to make this game a perfect storm of playoff implications. First, the Panthers’ tie game against the Cincinnati Bengals in Week 6 renders the divisional tiebreakers moot, removing a layer of uncertainty from our projections and throwing the playoff implications into starker relief. The NFC South also exists in its own playoff bubble, quarantined from the rest of the NFC (see the NFC chart above — the South is surrounded by a healthy buffer of gray cells). The second-best team from the NFC South is unlikely to contend for one of the two wild card seeds, making playoff probability synonymous with division title probability. With fewer teams with which to exchange playoff probabilities, the amount of each weekly probability “swap” becomes that much larger. And finally, the Panthers and Saints go into Thursday night’s game with near-identical records, thus the winner will emerge with sole possession of the lead in the NFC South.

In the AFC, the game between the Pittsburgh Steelers and Baltimore Ravens in the North is similar. It’s also a divisional matchup with significant implications for the participating teams, and little to no consequence for the rest of the league.

At the opposite end of the spectrum, we have Sunday’s game between the Philadelphia Eagles and the Houston Texans. This game features a total playoff swing of 73 percentage points split among 19 NFL teams. More than half the league has a rooting interest in the outcome. As one would expect, AFC teams do better with a Houston loss and NFC teams do better with a Philadelphia loss. Somewhat surprisingly, the Dallas Cowboys’ playoff hopes only swing by a relatively small amount, despite being in a tight race with the Eagles for the NFC East title. The reason for the relatively low stakes is that a win by the Eagles largely trades division title probability for wild card probability. An Eagles win would drop the Cowboys’ division title chances from 48 percent to 42 percent, but their wild card outlook would increase from 30 percent to 34 percent, resulting in a net playoff loss of only 2 percentage points.

The most anticipated game of the week figures to be Sunday’s matchup between the Denver Broncos and the New England Patriots. But in terms of playoff implications, the latest iteration of the Brady-Manning rivalry ranks fairly low. The Broncos are a virtual lock for the playoffs in our simulations. A loss to New England would be but a scratch, dropping their playoff prospects from 99 percent to 98 percent. The stakes are higher for the Patriots but far from make or break. A loss would drop their playoff chances from 79 percent to 73 percent.

This game does have a significant impact on the race for the top playoff seed in the AFC. Going into Week 9, the Broncos are the clear favorite, with a 79 percent chance of winning the No. 1 seed. If New England is able to pull off a victory at home, the race opens up considerably. The Broncos’ chances drop to 59 percent, with the benefit largely accruing to the Patriots: The Patriots’ top-seed probability would increase from 9 percent to 21 percent. And because the first tiebreaker used is head-to-head matchups, a win against the Broncos is worth two games to the Patriots.

A New England victory would also increase the Colts’ chances from 4 percent to 7 percent. The Colts opened the season with a loss to the Broncos, thus the head-to-head tiebreaker works against them here. The chart below summarizes the anticipated top-seed probabilities under both outcomes of the Denver-New England matchup. 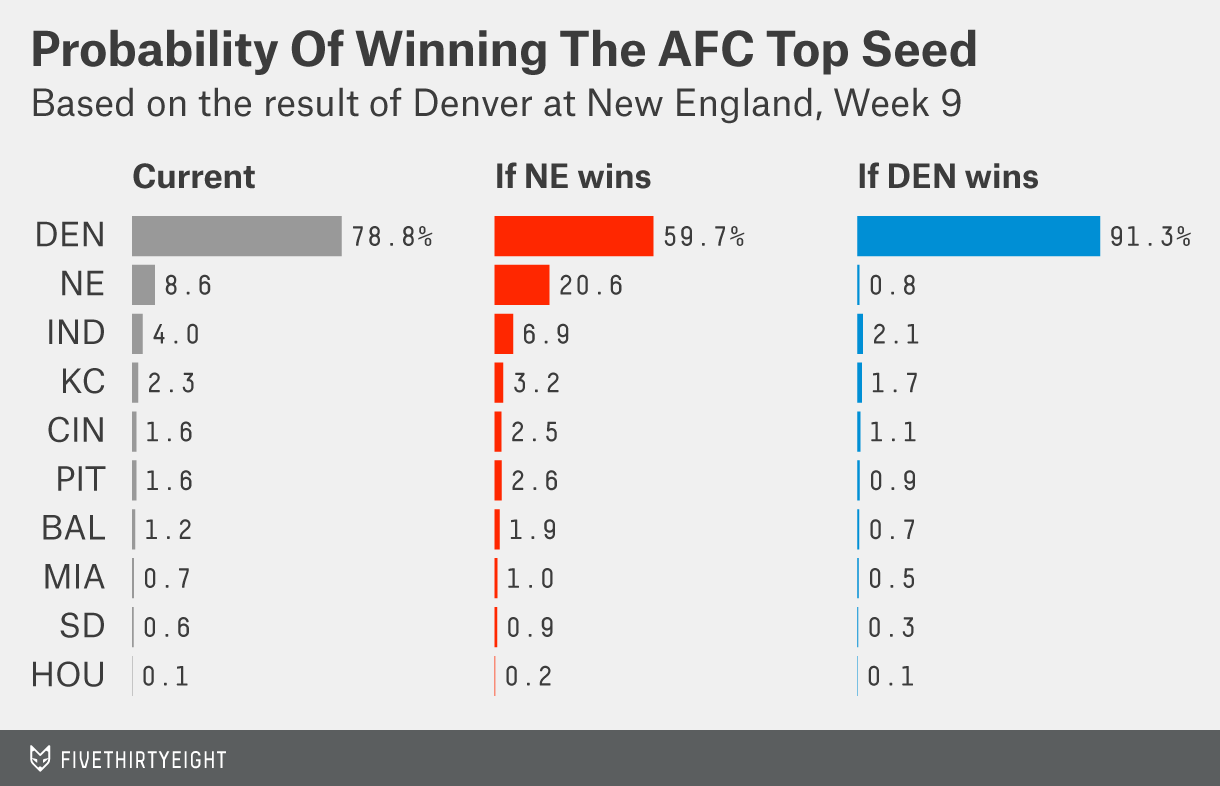 Our game summary table features some new columns this week. Each game’s impact to the finer points of playoff seeding is also assessed and summarized. The Ravens-Steelers game has the largest impact on division title probabilities (seeds No. 1 through 4). The Cardinals-Cowboys game is most consequential for which teams qualify for a first-round bye (seeds No. 1 and 2). And as we have already called out, the Broncos-Patriots game has the largest impact on which team gets the top conference playoff seed. 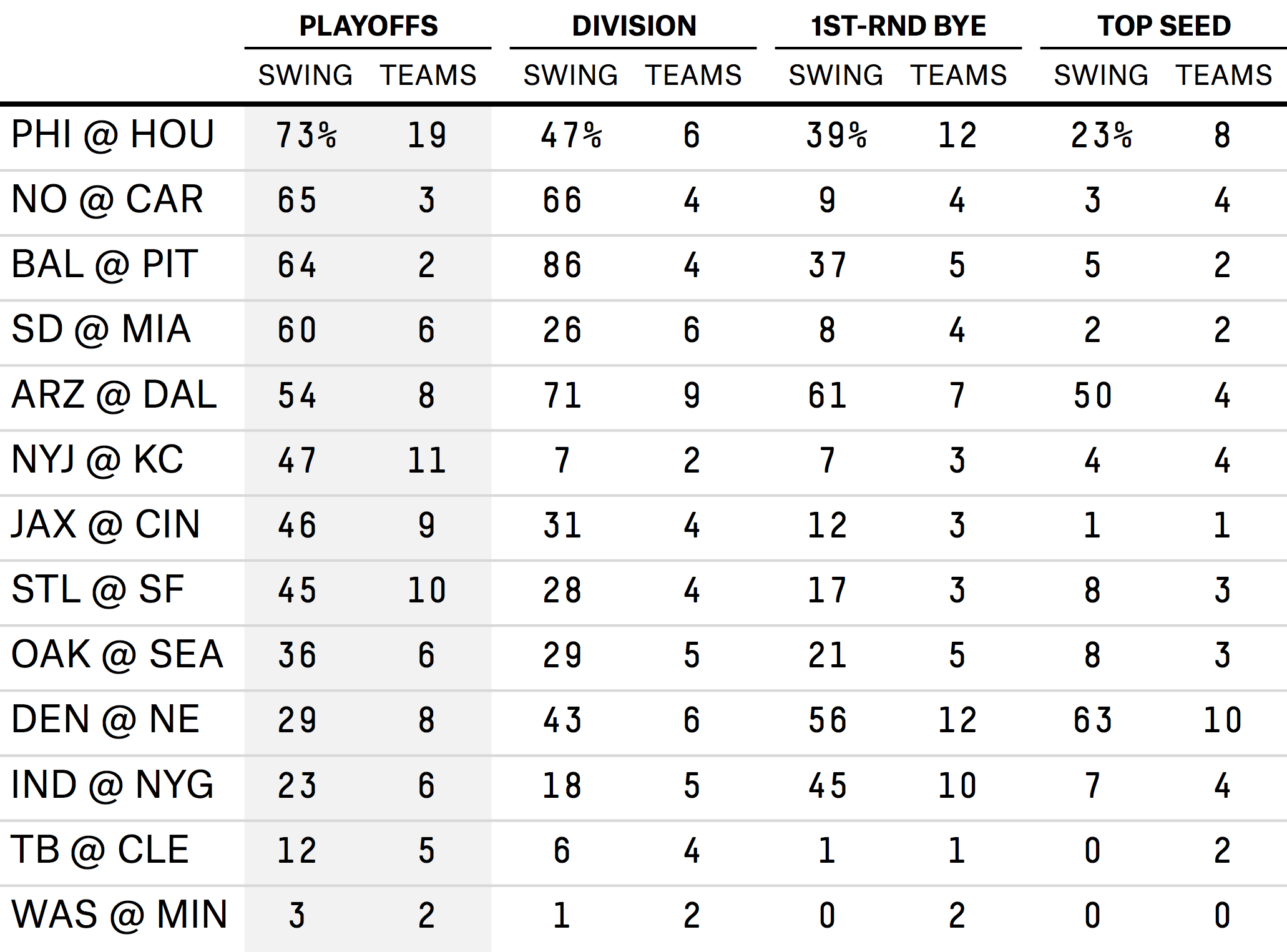