NFL Playoff Implications, our weekly guide to what games matter, and whom they matter to, returns for Week 8 of the NFL season. For an explanation of the methodology, see here. The rankings behind these probabilities can be found here, at the co-author’s blog.

UPDATE (Oct. 24, 2:44 p.m.): The interactive tables above have been updated to include Thursday night’s game, which now shows no playoff implications because its result is included in the playoff chances (the text of the article has not been updated).

Playoff spots are a finite resource in NFL. Like squeezing a balloon, if one team’s playoff chances decline, other teams’ chances expand.

Take, for example, Sunday’s game between the New Orleans Saints and the Detroit Lions. In last week’s column, we highlighted this as the most consequential game — 12 of the 16 NFC teams had a rooting interest in what took place at Ford Field that afternoon. And, with the exception of the Saints’ NFC South rivals, they all wanted the Lions to lose. To understand why is to understand the interconnected nature of NFL playoff probabilities. Going into Week 7, the Lions were 4-2 and an above-average team. But they also have a superior division rival in the Green Bay Packers. With Green Bay crowding out the Lions’ division title hopes, the Lions’ playoff hopes lay in a wild card spot, which, in turn, crowds out its other NFC rivals.

A Lions loss would have opened the door for the rest of the NFC in the wild card competition.

The Saints, on the other hand, play in the NFC South, where mediocrity reigns. Someone has to come out on top of that mess and make the playoffs, but it is unlikely that a wild card team will as well. As a result, the rest of the NFC becomes largely indifferent to the goings on in the NFC South. To torture our balloon analogy: The NFC South is its own self-contained balloon, with playoff probabilities traded only among those four teams.

Last week’s top game featured 12 teams with a statistically valid interest in the result. This week’s top game1, the Seattle Seahawks visiting the Carolina Panthers, features 14 interested teams. None of the NFC South teams won last Sunday, making it even less likely that a wild card team will emerge from that division. So, with the exception of the Saints, Atlanta Falcons and Tampa Bay Buccaneers, the other 11 NFC teams should be hoping for a Seahawks loss on Sunday. 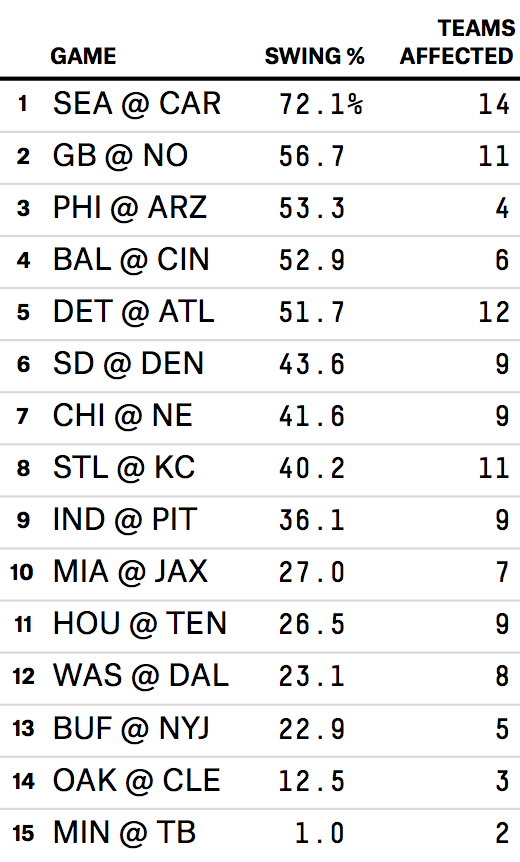 The Panthers’ tie game against the Cincinnati Bengals in Week 6 has interesting implications. It magnifies the impact of each game by making projections of playoff seeding more certain. With only 16 regular-season games, teams competing for playoff berths often finish with identical records, requiring the use of tiebreakers (e.g. head-to-head record, division record, conference record, “strength of victory,” etc.). Those tiebreakers add a layer of uncertainty in our simulations. But now that the Panthers have a tie in their record, tiebreakers become largely moot.2 Barring another tie game, Carolina is in a game of leapfrog with its competitors in the NFC South — half a game out of sync with everyone else.

The magnifying effect of a tie can also be seen in this week’s top AFC matchup: the Bengals hosting the Baltimore Ravens. In contrast to the top NFC game, this game only affects six teams, but the swings are significant, particularly for the two participants. A loss by the Bengals would drop their playoff chances to 40 percent. A victory would put them at 67 percent — a 27 percentage-point swing (the largest swing for any NFL team this week). A Ravens victory would give them the inside track on the AFC North title and an overall playoff probability of 92 percent. The other four teams with rooting interest are the Pittsburgh Steelers, San Diego Chargers, Kansas City Chiefs and Buffalo Bills, and all four would prefer a Ravens victory because the Bengals are a bigger threat to wild card position.

In general, NFC games create bigger swings this week than the AFC games. The NFC’s playoff picture is more open than the AFC’s. In the AFC, the Broncos and Colts both have a greater than 90 percent chance of making the playoffs, and the Raiders and Jaguars have flatlined at 0 percent. But in the NFC, even the lowly Buccaneers and Vikings have a non-zero chance of making the postseason in our simulations.