The Denver Broncos, who moved into the top slot in our Elo ratings last week, widened their advantage over the rest of the league in Week 7. Denver looked dominant in beating the San Francisco 49ers, who had been the No. 3 Elo team. The No. 2 Seattle Seahawks lost — greatly imperiling their playoff chances — as did the No. 5 San Diego Shargers. The No. 4 team, the New England Patriots, barely won against an awful opponent, the New York Jets.

So, it’s time to pose the question Aaron Schatz asked at Football Outsiders. Is this Denver team merely the best in the league — or one of the best teams ever?

The Broncos’ Elo rating is 1683, which translates to being favored by a touchdown in a neutral-site game against an average opponent. It’s also a fairly typical rating for the best team in the league at this point in the season. On average since 1970, the highest-rated team through Week 7 had an Elo rating of 1686, almost exactly matching Denver’s this year.

Let’s pick some nits with the Broncos: They’ve lost once this year. They had a bye week. They fizzled in the second half against the Indianapolis Colts. And they were crushed in last year’s Super Bowl.

Is this unfair? Except perhaps for the Super Bowl part, of course it is. Denver’s loss came on the road at Seattle and may have literally been the result of a coin flip. Beating Indianapolis by any margin looks more impressive given how well the Colts have played since. It’s not the Broncos’ fault that the schedulers gave them an early-season bye (and thereby one less opportunity to improve their Elo rating). More sophisticated statistical treatments — from Football Outsiders’ DVOA (Defense-adjusted Value Over Average) to Benjamin Morris’s assessment of Peyton Manning’s clutchness — tend to have a higher opinion of the Broncos than Elo does.

But if we’re judging whether the Broncos are a historically great team, we have the right — nay, the duty — to be very, very picky.

This is not just an academic question. In the table below, I’ve taken the teams that had the highest Elo rating through Week 7 in each season since 1970. Eleven of the 25 teams that rated higher than the Broncos — or 44 percent — would go on to win the Super Bowl. But just two of the 19 (11 percent) that rated below the Broncos did. 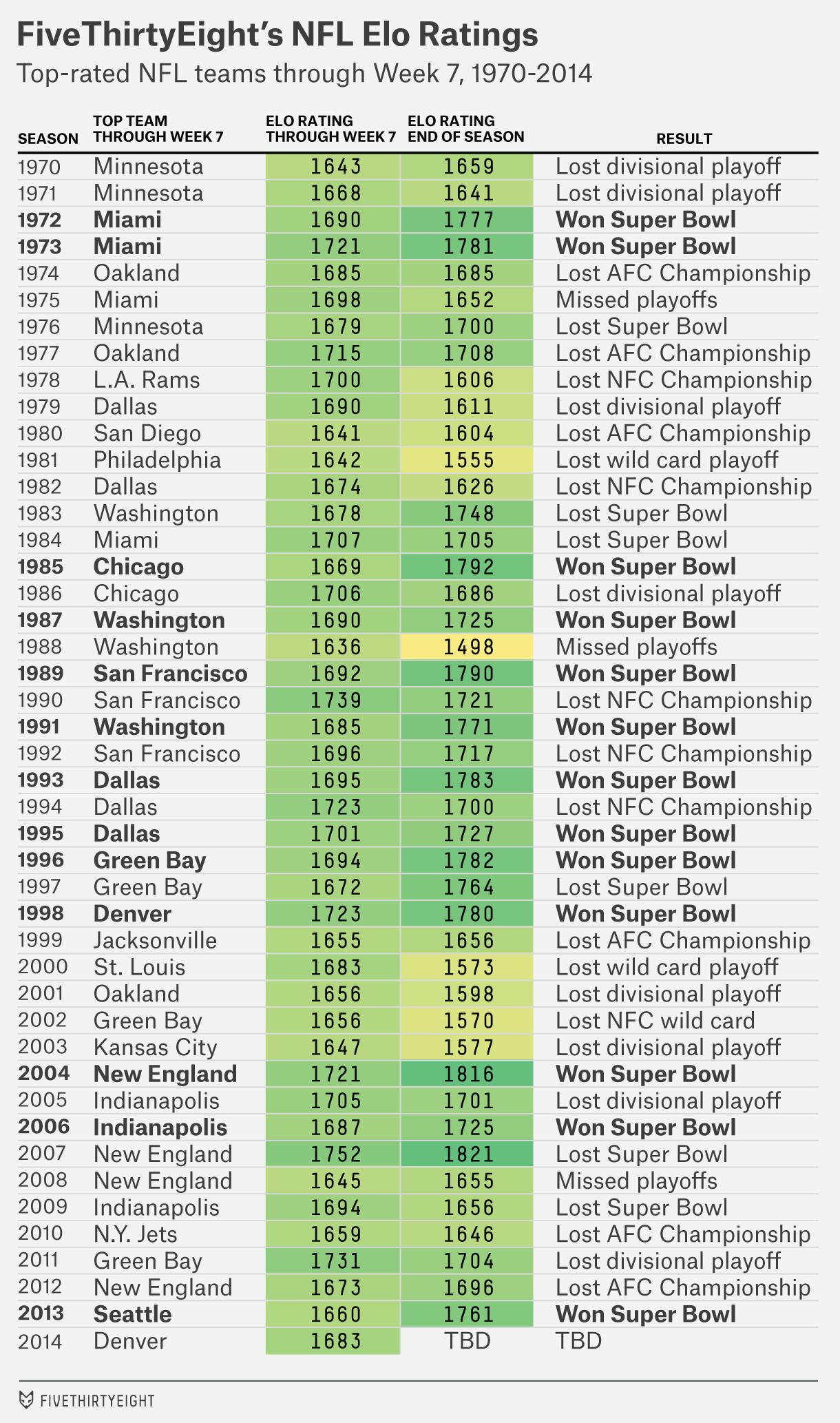 A lot of this is because even small advantages can compound over time. It’s not as though we can say with all that much confidence whether this year’s Broncos are better than, say, the 1998 edition of the team under John Elway. (Elo would have the 1998 Broncos favored, but by only 1.5 points). But a team that’s ever-so-slightly better is more likely to make the playoffs as a division champion rather than a wild card, more likely to have playoff games at home and to get a first-round bye, and more likely to win those playoff games once they occur. A team that’s a 70 percent favorite in each playoff game, and that needs to win three games to win the Super Bowl because it gets a bye, has a 34 percent chance of winning a championship. A team that’s a 60 percent favorite and that has to win four times has just a 13 percent chance.

Elo puts the Broncos’ chances of winning the Super Bowl at 18 percent, somewhere between the two groups. Their Thursday-night home game against San Diego will be highly informative. A win for Denver would put it in a dominant position in the AFC West — it’d be a game-and-a-half ahead of the Chargers and at least two games ahead of the Kansas City Chiefs (with a tiebreaker advantage against each division rival). A loss to the Chargers would instead place Denver half a game behind San Diego with a tiebreaker disadvantage (and with the remaining game between the teams to be played in San Diego).

The Broncos will probably make the playoffs as a wild card even if they lose their division, but the Super Bowl is much harder to win under those circumstances. The Broncos would have to play an extra game, and they’d have to play on the road. In our simulations, the Broncos won the Super Bowl 23 percent of the time as division champs but just 4 percent of the time as a wild card team. There’s not only playoff leverage riding on this game; there’s a lot of Super Bowl leverage at stake.

Here are the current playoff odds for the other NFL teams: 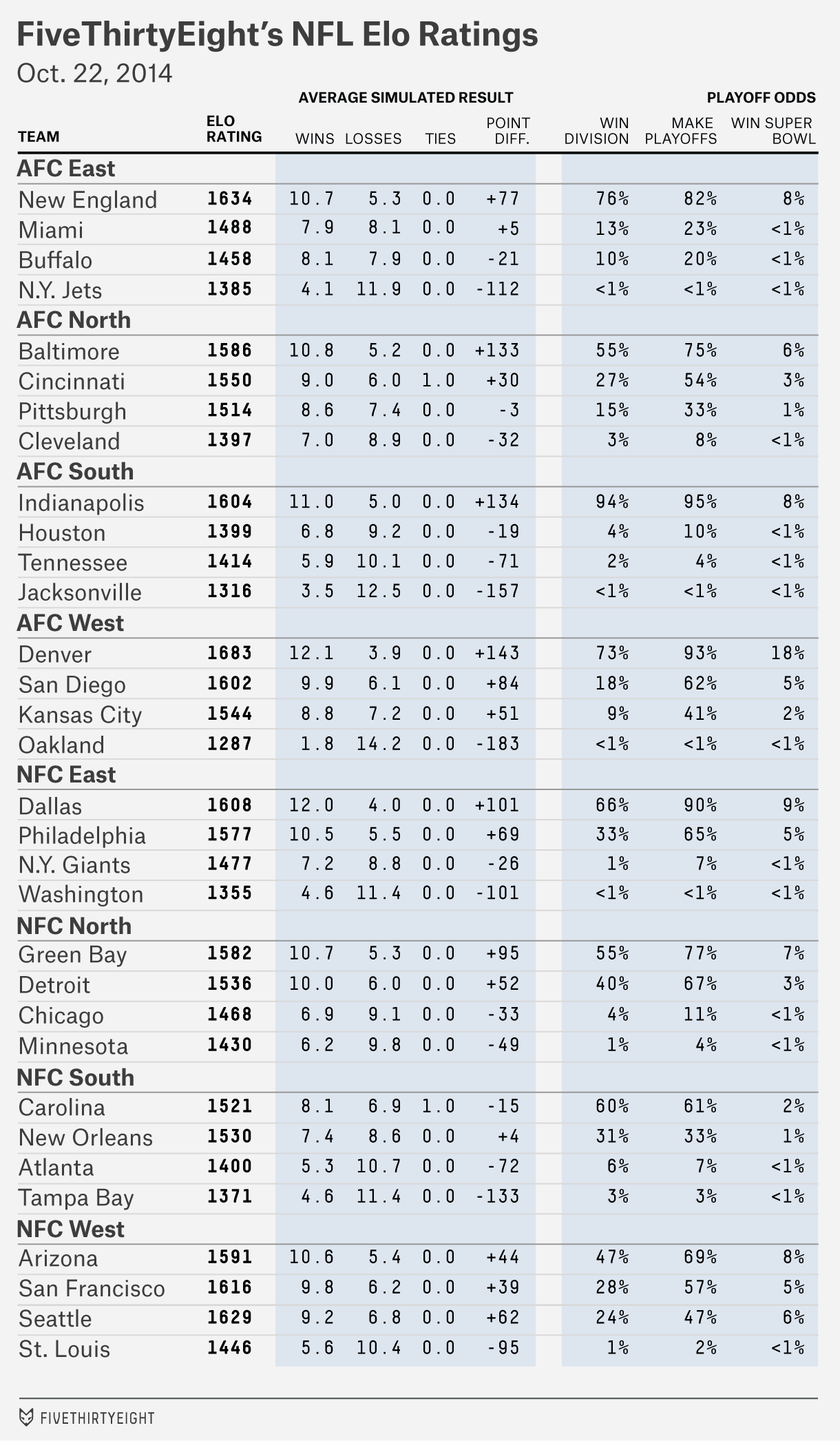 The Colts, who were briefly underdogs to make the playoffs after starting off their year 0-2 (Seahawks fans can take solace in that), are now 95 percent favorites to do so after having won every game since. Some of this is because the Colts are very good, but just as important is their extraordinarily weak division. The Houston Texans project to a record of 7-9, the Tennessee Titans 6-10, and the Jacksonville Jaguars (despite finally winning last week) 4-12. In our simulations, the Colts won the AFC South 82 percent of the time they finished with a 9-7 record and 62 percent of the time they went 8-8. Even a 7-9 record would often be enough to get them in. Andrew Luck is both lucky and good.

Otherwise, the AFC playoff chase is more scrambled than last week. The Cincinnati Bengals are winless in their past three games (they managed a tie against the Carolina Panthers) and down to a 54 percent chance of making the playoffs, in danger of being lapped by Kansas City (41 percent) and the Pittsburgh Steelers (33 percent). Their matchup this week, at home against the division rival Baltimore Ravens, is another high-stakes game.

The NFC, almost inevitably, will feature a ferocious battle for the wild card positions. Dallas, Philadelphia, Green Bay, Detroit, Arizona, San Francisco and Seattle all have somewhere between a 22 and 32 percent chance of winning a wild card. Three of those teams (barring a miraculous run by a team like the Chicago Bears) will win their divisions, but that leaves four teams fighting for two slots.

The Arizona Cardinals, incidentally, have a chance to become the first team to play a Super Bowl in its home stadium. Although Arizona is probably weaker than either San Francisco or Seattle, it has a leg up in the NFC West by virtue of its 5-1 start. Elo gives the Cardinals a 15 percent chance of making the Super Bowl and an 8 percent chance of winning it. 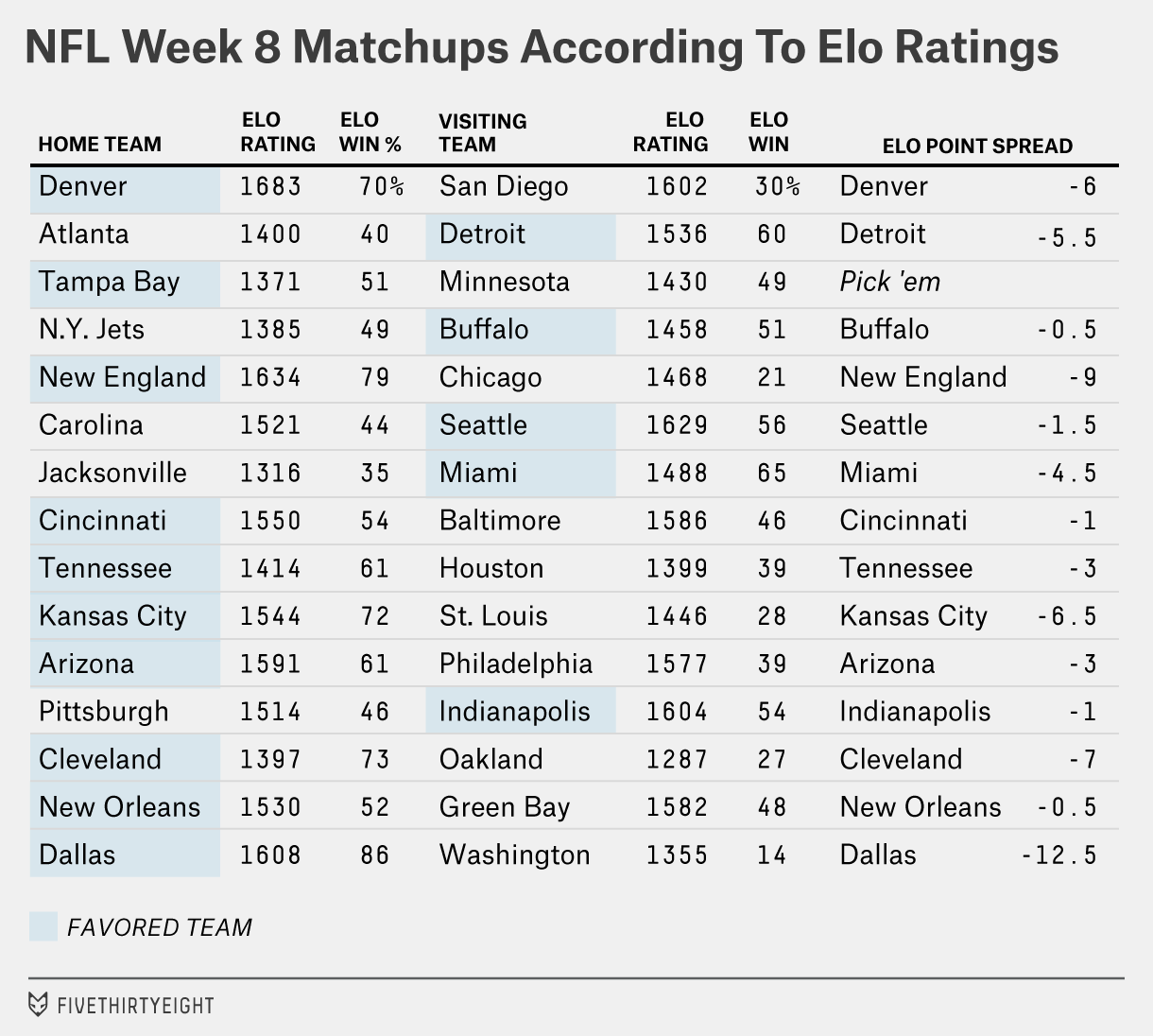 Even if we thought you should bet based on these odds — and we don’t — it wouldn’t be in cases where bookmakers have a team as a 2.5-point favorite and Elo has the same team favored by, say, two points. There are a lot of games like that this week and fewer differences between Vegas and Elo than in past weeks. The biggest split of the week is in an unwatchable game: Elo has the Titans favored by three points at home against Houston, while Vegas has the Texans as one-point favorites.

The Washington Redskins are also a perpetual punching bag for Elo, and the system would have you take the Dallas Cowboys against them (even as 9.5-point favorites, as Vegas has the Cowboys). As Washington was on the verge of losing to the Titans last week — it pulled the game out but didn’t cover the point spread — The Wall Street Journal’s Neil King tweeted that Washington was struggling to beat “the third worst team in the league,” presumably referring to Tennessee. Actually, Elo has Washington rated as the third-worst team! Washington went 11-5 against the point spread in 2012 and perhaps is still getting too much credit for it; it’s 7-16 against the spread since then. The team’s straight-up record, 5-18, is even worse.