What opponent would you least want to see on your favorite NFL team’s schedule? Most of you, I’d guess, would want to avoid Peyton Manning and the Denver Broncos. But after that?

The Seattle Seahawks, despite their 3-3 record, remain a perfectly reasonable answer to this question. When our NFL Elo ratings come out later this week, they’ll have Seattle in third place — just slightly behind New England (and further behind Denver) and just slightly ahead of Dallas, Indianapolis and San Francisco. You could argue these cases — are you more afraid of the Seahawks defense or Colts quarterback Andrew Luck? Are you sure you’d rather play Seattle than Denver when the Seahawks already beat the Broncos this season — and demolished them in last year’s Super Bowl?

It’s not as though Seattle’s season has been a disaster. The Seahawks have outscored their opponents by 18 points against a very tough schedule. Jeff Sagarin’s ratings at USA Today have them as the third-best team in football based solely on their performance this year.

Our Elo ratings carry over performance from previous seasons, which helps Seattle some. This usually yields more reliable estimates of team strength, especially early in the season (six games is a small sample size). You could argue against accounting for prior years’ performance when a team is old or when its roster had turned over substantially. But Seattle’s hasn’t. It has brought its core back from last year, when it was the third-youngest team in football. Quarterback Russell Wilson is just 25, an age when most QBs are still improving.

Nonetheless, the Elo ratings have the Seahawks as underdogs to make the playoffs. In the simulations we ran after Sunday night’s games, Seattle made the playoffs just 46 percent of the time.

The Seahawks are harmed by playing in the NFL’s toughest division, in a deep conference and against a very tough schedule. A league-average team playing Seattle’s schedule this year would be expected to go 7-9 based on each opponent’s Elo ratings, so the schedule costs the Seahawks about one win.

Seattle will also need to finish with an 11-5 record or better to be assured of making the playoffs. In simulations where Seattle finished 9-7 — its most likely record according to Elo — it made the playoffs just 23 percent of time, well below the historical average for 9-7 teams of about 50 percent. 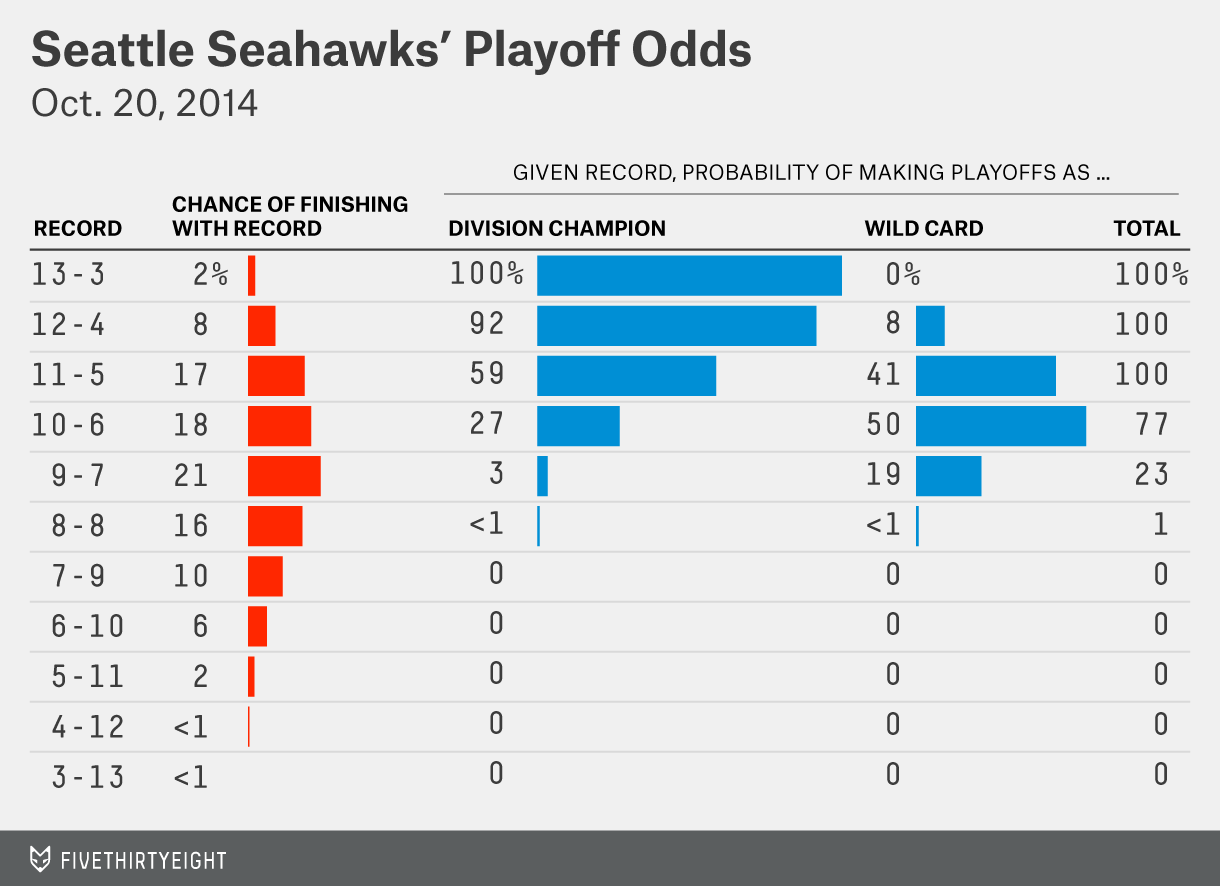 Nor may a 10-6 record be good enough. In our simulations, Seattle won the NFC West only 27 percent of the time with that record. More often, a 10-6 Seattle team made the playoffs as a wild card. But the NFC playoff picture is crowded. Seattle would have to compete for two wild card slots along with whichever team finishes second in the NFC East (probably Philadelphia or Dallas), whichever team finishes second in the NFC North (probably Detroit or Green Bay) and whichever other NFC West team (San Francisco or Arizona) also misses out on the division title.

And while an 11-5 record was almost always good enough for Seattle to make the postseason, it only earned the Seahawks a division title 60 percent of the time. That means they’d start their playoffs on the road — depriving them of the benefit of the NFL’s biggest home-field advantage.

Perhaps the Seahawks don’t have much right to complain — it was only four seasons ago when they made the playoffs as a 7-9 team in an awful NFC West. But the trend toward smaller divisions in sports makes odd outcomes like this more likely. If Seattle makes the playoffs, it will certainly have earned it.