The Seattle Seahawks, No. 1 in our NFL Elo ratings since the start of the season, have relinquished that position after losing 30-23 at home against the Dallas Cowboys. The new Elo No. 1 probably won’t cause much controversy: It’s the Denver Broncos, who are also the betting favorite to win the Super Bowl and the top-rated team in ESPN’s panel of experts. But after that, there’s more disagreement. Should Dallas — now 5-1 and having won against Seattle head-to-head — rank ahead of the 3-2 Seahawks?

The experts panel thinks so: It now has Dallas at No. 3 and Seattle at No. 5. But betting odds still prefer Seattle. The prices at Betfair imply Seattle has a 13 percent chance of winning the Super Bowl; Dallas is at 6 percent.

Elo’s answer somewhat splits the difference. It still has the Seahawks ranked about 50 Elo points higher than Dallas, which translates to Seattle being 2-point favorites in a game played on a neutral field. The gap has closed: At the start of the season, Elo would have had the Seahawks favored by a touchdown in a neutral-site game. However, Elo ratings take past seasons into account. In the system’s estimation, Seattle’s accomplishments from last year still matter enough to outweigh what the Cowboys have done so far this year.

But the Cowboys’ strong start does count for a lot. Because of it, they project to 11.5 wins on the season, as compared with 10 wins for Seattle. Dallas also plays in the easier division and otherwise has the easier schedule, having survived some of its tougher games.

In fact, the Seahawks are at risk of missing the playoffs entirely. In part because San Francisco (No. 3 overall in the Elo ratings) and Arizona (No. 7) also play in the NFC West, Seattle made the postseason only 60 percent of the time in this week’s simulations. Dallas, conversely, made the playoffs 82 percent of the time. Seattle is more likely to win the Super Bowl conditional upon making the playoffs. But since Dallas is more likely to make the playoffs in the first place, the teams’ overall Super Bowl chances are about the same according to Elo: 9 percent for the Seahawks and 8 percent for the Cowboys.

Here are the playoff odds for the those two, and the other 30 NFL teams: 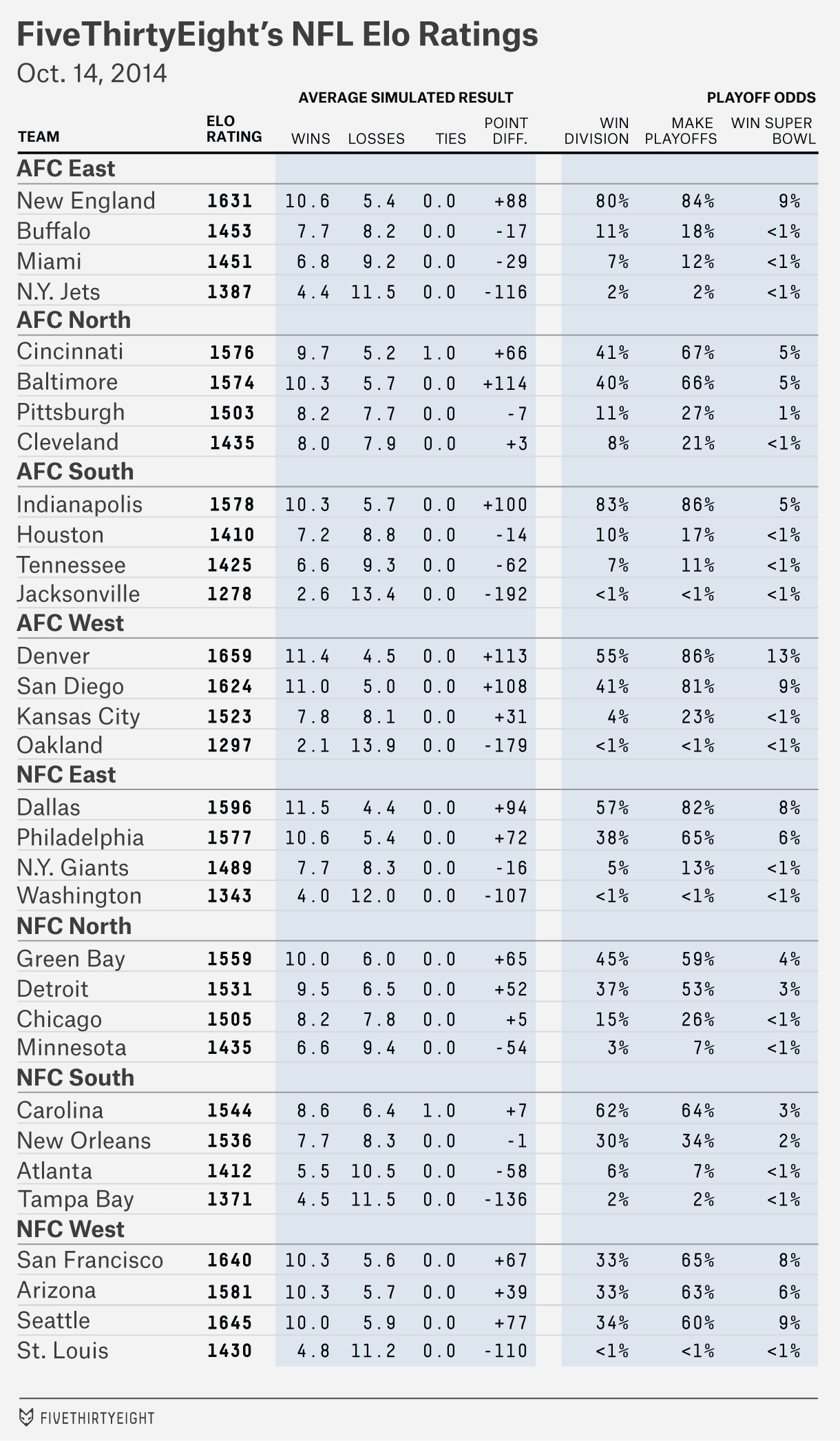 The AFC playoff picture has become surprisingly clear. The most likely teams to earn the conference’s six playoff slots are Denver (86 percent), Indianapolis (also 86 percent — there’s no one to beat them in the AFC South), New England (84 percent), San Diego (81 percent), Cincinnati (67 percent) and Baltimore (66 percent). Then there’s a big drop-off to the next tier of teams — led by Pittsburgh and Kansas City — none of whom is higher than 27 percent.

The NFC’s playoff hunt is more crowded. The aforementioned Cowboys, at 82 percent, are the safest bet to make the postseason. But then there’s a glut of seven teams — San Francisco, Seattle, Arizona, Philadelphia, Green Bay, Detroit and Carolina — all between 53 percent and 65 percent. At least two of those teams won’t make it, unless they knock Dallas out.

This leaves some perfectly decent football teams facing long odds. The Chicago Bears have just a 26 percent chance to make the playoffs. The New York Giants are at 13 percent (and that’s without accounting for the injury to Victor Cruz). New Orleans has a 30 percent chance of overtaking Carolina to win the NFC South, but in our simulations the Saints made the playoffs as a wild card team only 4 percent of the time.

It isn’t very hard for a team with league-average talent like Chicago to back into a 10-6 or 9-7 record. However, the problem isn’t just the number of good teams in the league — the number of really bad ones is also causing issues. The Oakland Raiders, Jacksonville Jaguars, Washington Redskins, New York Jets and Tampa Bay Buccaneers project to a combined record of just 18-62. That’s a lot of extra wins distributed to the other teams in the league. In our simulations, 9-7 teams are reaching the playoffs only 29 percent of the time — much lower than the historical average of 51 percent. Nor is a 10-6 record as safe as usual; those teams are missing the playoffs 25 percent of the time.

Tie for the win

What about a record of, say, 10-5-1? Both the Carolina Panthers and Cincinnati Bengals now have a tie on their resumes, having drawn 37-37 last weekend in Cincinnati (this was the highest-scoring tie in NFL history, incidentally). This is the third tied game in as many seasons since the NFL changed its overtime rules before the 2012 season; two of those games would not have been ties under the previous rules.

Fans and coaches seem to hate ties — but as soccer fans know, there are some circumstances when ties can play to the teams’ mutual advantage. The Panthers’ playoff odds increased to 64 percent from 59 percent after the tie. The Bengals’ were unaffected, remaining at 67 percent, despite the best competition in their division, the Ravens, having won.

The geeky explanation for this is that teams in a strong position — both Cincinnati and Carolina were favorites to make the playoffs before the game — would prefer to avoid variance. Imagine your team starts its season 7-1; such teams make the playoffs 95 percent of the time. Would you take the option of drawing your eight remaining games — finishing the season with the awkward-looking record of 7-1-8 — instead of playing out the string? If your sole concern is making the playoffs, the math says you actually should. A 7-1-8 record is equivalent to a 11-5 record the way that the NFL scores these things, and 11-5 teams make the playoffs 98 percent of the time.

Indeed, there are some oddball scenarios where teams would have an even stronger incentive to play for the tie. Say the Bills and the Patriots are tied atop the AFC East at 9-6 (with the Dolphins and Jets well behind) and playing the last game of the NFL season on Sunday night in Week 17. Let’s say they know a 10-5 or 9-6-1 record would be good enough to earn a wild card, while 9-7 would not be. A tie gets both teams in (one as division champion and one as the wild card) while any other result knocks the loser out. You think Bill Belichick wouldn’t find a way to tie?

The Elo point spreads are recovering after an awful start. They went 8-5 against Vegas lines in Week 6 (sitting out two games where they exactly matched the Vegas spread) and are 41-43-3 on the year. Elo’s straight-up record of picking winners is 64-26-1 on the year (10-4-1 in Week 6) or a 71 percent winning percentage. That probably reflects some good luck; historically, Elo ratings have picked the right winner about 65 percent of the time. Either way, we don’t recommend that you actually place bets on these. 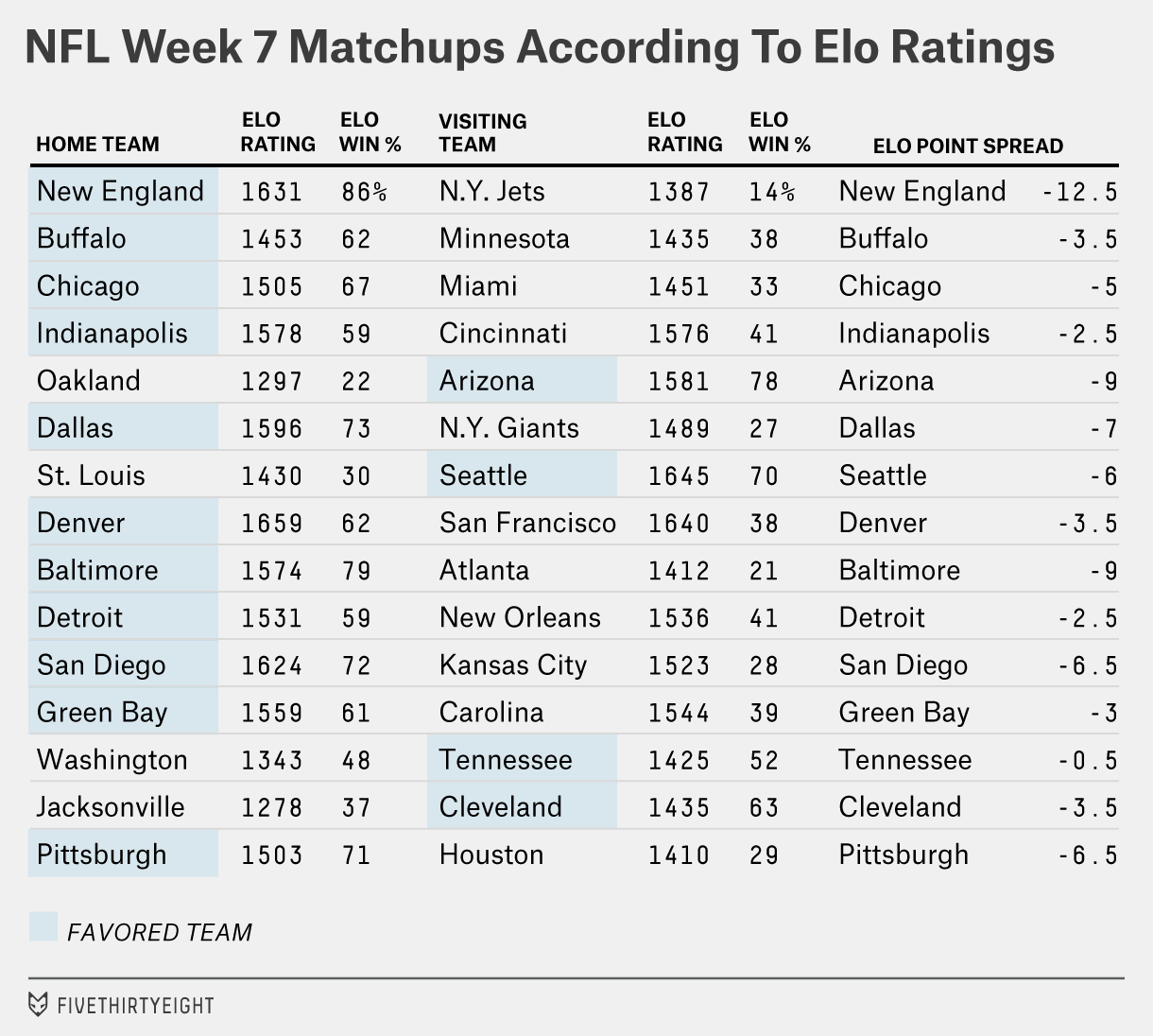 One of the games we highlighted last week was Arizona against Washington; I thought it was hard to explain how Vegas had the Cardinals favored by only a field goal at home. Indeed, the line expanded to 5 points to 5.5 points by game time. The Cardinals covered the spread, although barely, on an interception return with 18 seconds left (Rashad Johnson should probably have kneeled the ball) to win by 10 points instead of 3.

There are again some big discrepancies involving the Cardinals and the Redskins this week. Elo has Arizona favored by 9 points on the road against Oakland, while Vegas has the Cardinals as just 3.5-point favorites. And Vegas has Washington favored by 6 points at home against Tennessee, while Elo has the Titans as (very slight) outright favorites.

In a game that may be of interest to people aside from degenerate gamblers, the Broncos will host the 49ers on Sunday night. Elo, despite having Denver at No. 1 overall, is not quite as high on the Broncos as betting markets (it has the Broncos with a 13 percent chance of winning the Super Bowl versus 19 percent for betting lines). So Elo would take San Francisco and the points.