As my colleague Neil Paine explained earlier this week, the Cincinnati Bengals now project to finish with the best record in the NFL — at least according to FiveThirtyEight’s NFL Elo ratings. The Bengals probably are not the best team in the league; Seattle ranks ahead of them in the Elo ratings, as do Denver and New England. But Cincinnati is 3-0 so far, and those other teams are 2-1. That extra win coupled with a relatively favorable schedule puts the Bengals slightly ahead of the others in projected wins.

And yet, the Elo simulations have the Bengals finishing with an average record of 11-5 (11.2 wins and 4.8 losses if you want more precision). Doesn’t the best team in the NFL usually do better than that?

But here’s the thing: the Elo simulations do expect there to be at least one 14-2 team this year. We’re just not sure which team.

The chart below depicts the distribution of possible win totals, after thousands of simulations, for the Bengals along with the five other teams with the highest projected win totals. (Those are the Seahawks, Patriots, Arizona Cardinals, San Diego Chargers and Denver Broncos). As the chart should make clear, the Bengals’ 11.2-win projection is just an average outcome. Usually, they came pretty close to that average; they won between nine and 13 games in about 70 percent of simulations. But they also won 14 or more games 16 percent of the time. In about 6 percent of simulations, meanwhile, the Bengals wound up with a losing record. 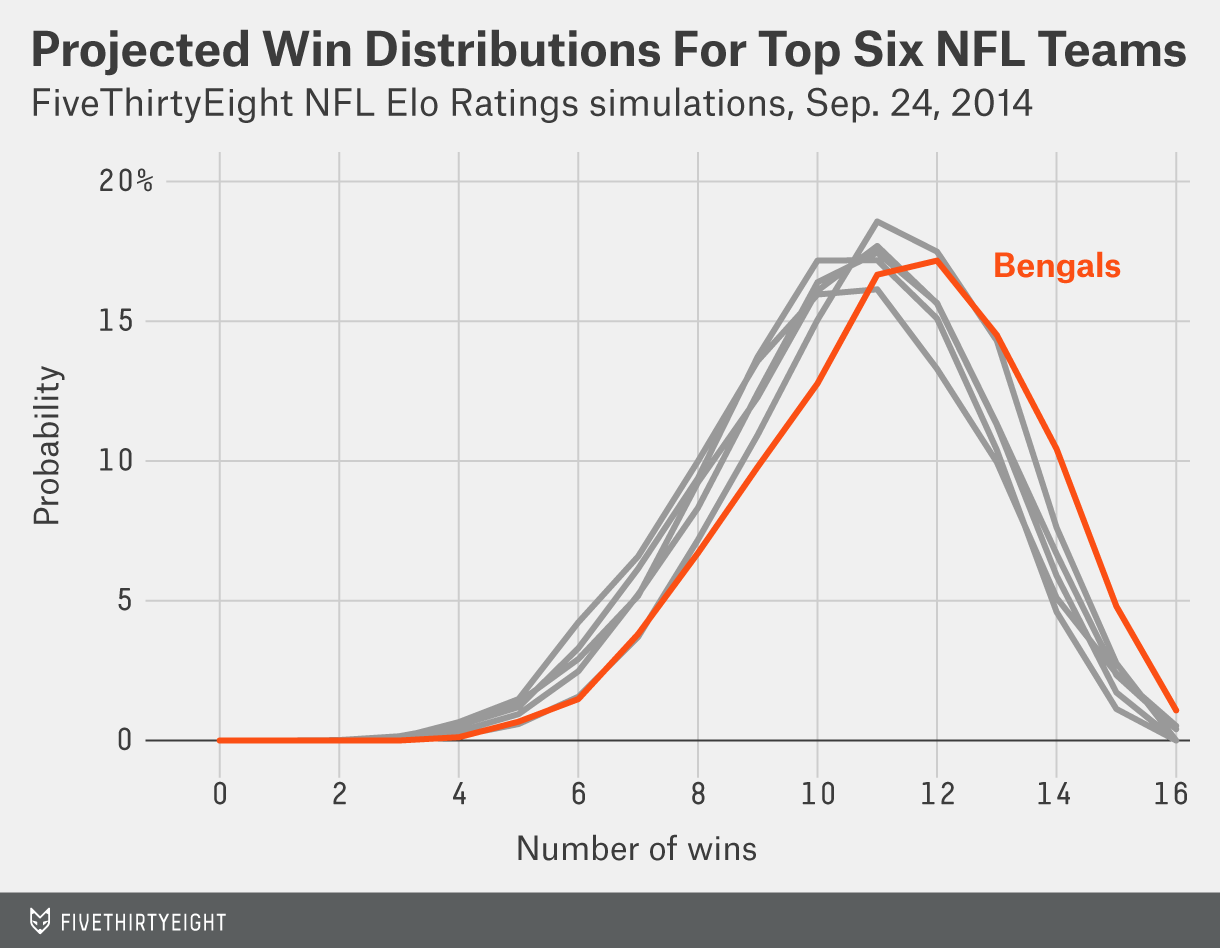 And the Bengals are not alone in having a chance to win 14 games. The Seahawks have a 10 percent chance. The Patriots have an 8 percent chance. The Cardinals, Chargers and Broncos are somewhere in the same ballpark, as are other teams like the Philadelphia Eagles and Carolina Panthers.

Overall, at least one team won 14 or more games in 62 percent of our simulations, which is right in line with the historical average.

Is this just a matter of one team getting hot? That’s a big part of it — it’s not so hard for a team to get lucky over a 16-game schedule. But it’s not the whole story. It’s early in the season, and it could also be that we’re underestimating how strong some of the teams are. Our simulations account for this possibility.

Take the Detroit Lions, for example. They’re certainly not among the more likely teams to win 14 games; they rate as almost exactly league average, according to Elo, and already have one loss. They’d need to win at least 12 of their remaining 13 games.

If you assume the Lions have a 50 percent chance of winning each remaining game, they’d need to do the equivalent of coming up with heads 12 or 13 times in 13 coin tosses. The probability of that is only 0.17 percent, or about one chance in 600, according to a binomial distribution.

But that isn’t the right assumption. It assumes that our projection of how the Lions will perform in one game should be independent from how they perform in the next. But this isn’t the case. Let’s put it this way: If the Lions are 7-1 by the time they reach their bye week in Week 9, would you still give them just a 50 percent chance of winning their remaining games? You wouldn’t — and neither does our Elo simulator.

Instead, the simulations are dynamic. We play out the rest of the season one week at a time, and a team’s Elo rating is affected by how it did in the previous week. If the Lions happen to win their game Sunday against the New York Jets in one simulation, for example, it will boost their Elo rating when the simulation gets to Week 5, making them more likely to win that game as well. And if they win that game too, they’ll be still more likely to win their Week 6 game.

This might seem like a trivial detail, but it isn’t. It reflects the fact that there’s considerable uncertainty about how strong each team is. And it has a meaningful effect on the odds. Because they’re dynamic, our simulations give the Lions about 1-in-75 chance of winning at least 14 games. Those are still very long odds, but you’d make a huge amount of money over the long run if you got paid out 600 times your wager on bets that actually had a 1-in-75 chance of coming through. 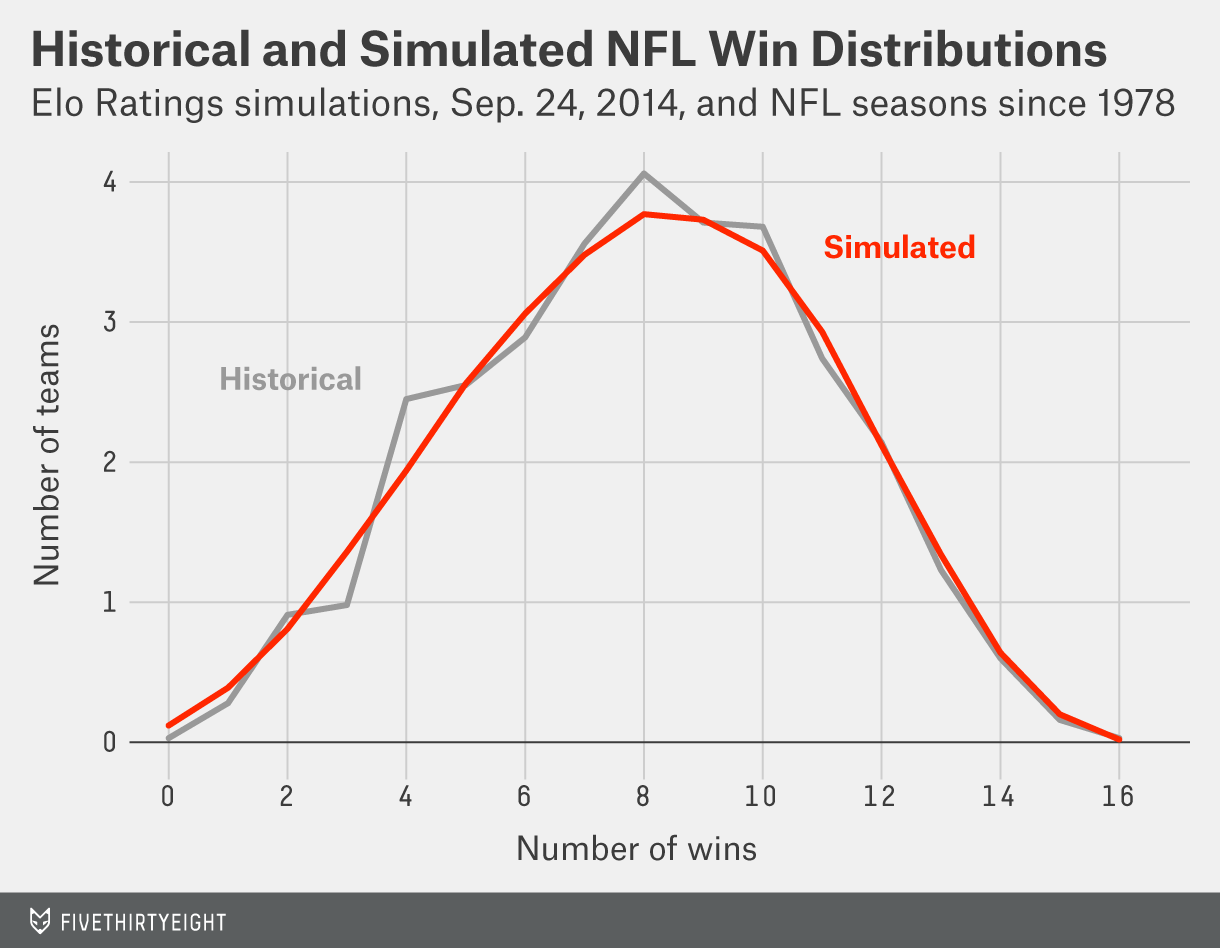 If we didn’t account for this properly, there would be too many teams bunched in the middle with records like 10-6 and 7-9 and too few with records like 14-2 and 1-15. That still doesn’t mean you should bet on any particular team to go 14-2. But the odds are that at least one of them will get there.