Before scrolling down and peeking at the table, take a guess: Which team has the highest projected end-of-season win total according to FiveThirtyEight’s latest NFL Elo ratings and playoff odds?

While you’re thinking, let me briefly explain what these numbers are all about. A team’s Elo rating represents its current strength — or at least an estimate thereof using a simple method that incorporates margin of victory, home-field advantage, strength of schedule and team quality in previous seasons. (For the really gory details of how the ratings work, click here.) To give you a sense of the scale, the average NFL team always has an Elo rating of 1500, and the ratings usually range from 1700 on the high side to 1300 on the low end of the spectrum.

Anyway, once computed, they can be used to derive win probabilities for each game and even point spreads. That’s how we’re able to simulate the remainder of the NFL schedule thousands of times and track each team’s chances of winning the division or making the playoffs, right down to using the NFL’s actual, highly arcane tiebreaker rules.

OK, so now that the explanation is out of the way, which team has the most predicted wins?

Perhaps you’re thinking of the Seattle Seahawks, who won their Super Bowl rematch with the Denver Broncos on Sunday afternoon. You’d be close; Seattle once again checks in with the top Elo rating this week (see left), but their schedule is difficult enough — eighth-toughest in the league, to be exact — that they don’t have the league’s highest expected win total. Speaking of the Broncos, they had the most predicted wins in last week’s column, but their loss to the Seahawks was damaging — both because it took away about 0.38 expected wins for the Seattle game itself, and because their Elo rating was downgraded by 14 (or the equivalent of a little more than a half a point of victory margin per game), reducing their win probabilities in future games as well.

New England, then? The Patriots did manage to win last week but only marginally improved their Elo rating after a seven-point victory over the Oakland Raiders in a game Elo thought they should have won by more than two touchdowns. They currently rank fourth in expected wins. And the Carolina Panthers, who had been pegged for 10.7 wins after a 2-0 start, dropped to a 9.1-win expectation in the wake of an 18-point home loss to the Pittsburgh Steelers.

The answer you were looking for was actually the Cincinnati Bengals, who project to win a league-high 11.2 games, according to our simulations. The Bengals moved to 3-0 for the first time since 2006 (don’t ask what happened that year) by drubbing the Tennessee Titans 33-7, and they now have the NFL’s best point differential. They also have an easier remaining schedule than the teams above them in the Elo pecking order. Based on Elo, an average team would be expected to beat Cincinnati’s remaining opponents by about 0.1 points per game (taking into account where the games are being played), while an average team would lose by 0.6 PPG against Seattle’s slate, 0.4 PPG against Denver’s and 0.2 PPG against New England’s.

The Bengals also have the league’s best playoff odds at 78 percent and its second-best shot at winning the Super Bowl. Cincinnati does not have the best division odds, thanks to the re-emergence of Pittsburgh and Baltimore (sorry, Cleveland). Before the season, we thought the AFC North would be up for grabs, and three of its teams had preseason Elo ratings above 1500, but they were all bunched at the fringe of the top 12. Now Elo’s fourth-, ninth- and 12th-best teams hail from the AFC North, making it the NFL’s second-best division (in terms of its members’ average rating) behind the fearsome NFC West.

Either way, Bengals fans should enjoy their team’s newfound success. They’re in a relatively prosperous cycle of the franchise’s history; including the end of last season, the team is consistently producing its best Elo ratings since the end of the 2005 season. Let’s hope there isn’t another Kimo von Oelhoffen moment waiting to derail the momentum this time around.

Here are the projected standings and playoff odds for every NFL team: 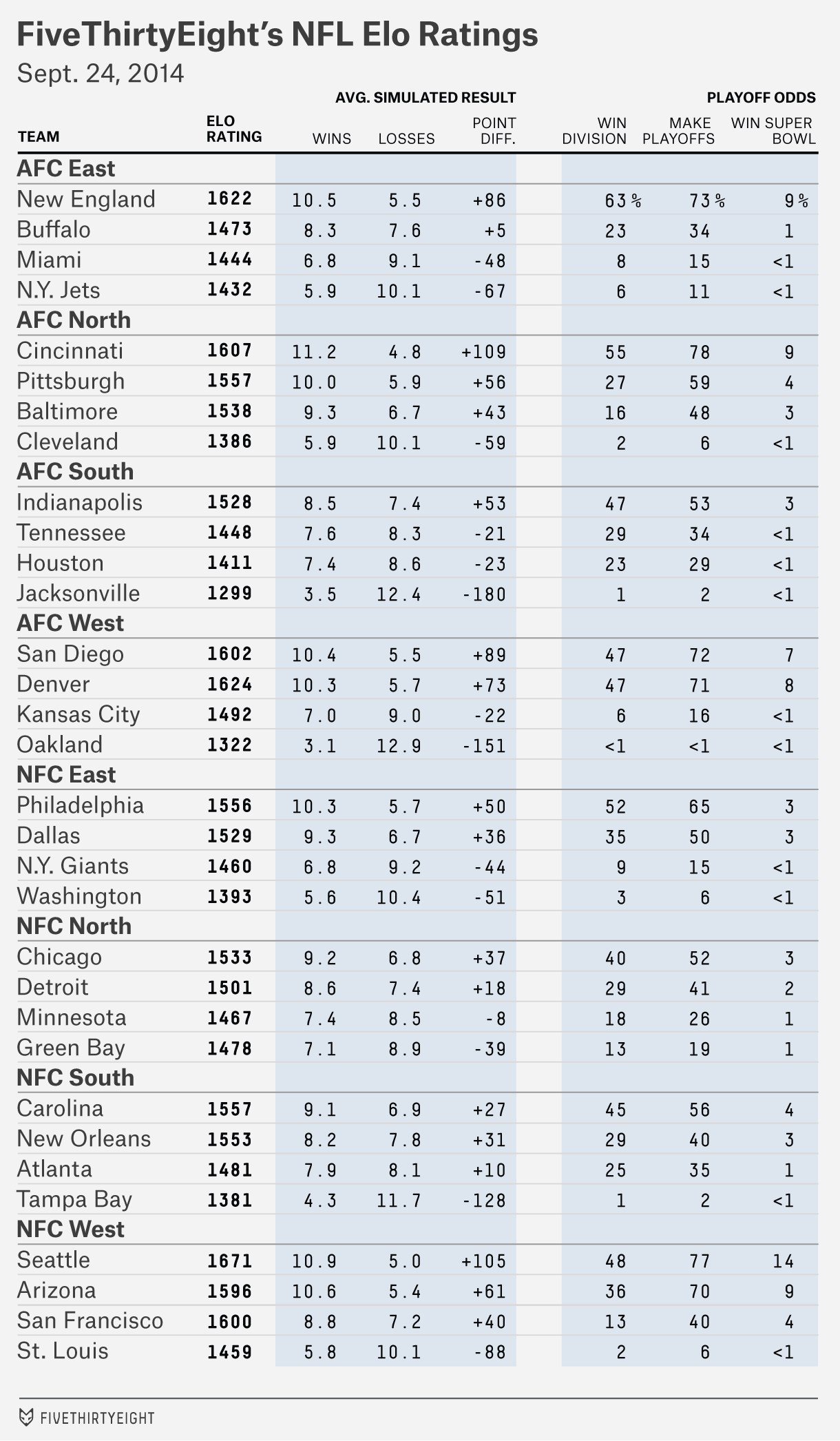 As I mentioned, Elo ratings can also be used to generate point spreads for future games. It is our staunch recommendation, however, that these be used for “entertainment purposes only” — especially after a performance like last week. Going up against the point spreads listed at Pro-Football-Reference.com, Elo’s picks were a dreadful 4-11-1 in Week 3. (They did have a 12-4 straight-up record.) But we’ll soldier on anyway and list the matchups for this week, along with their predicted win probabilities and point spreads: 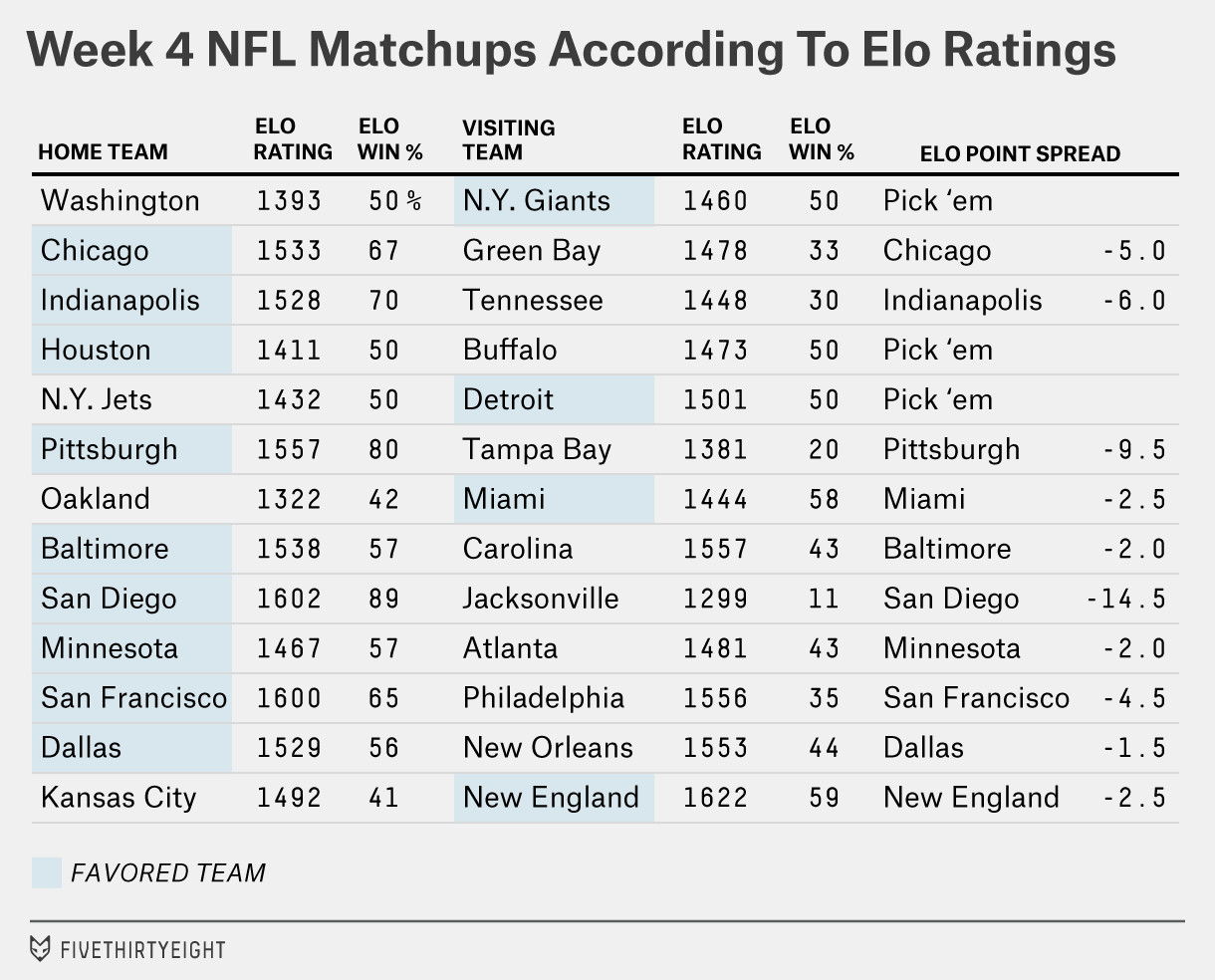 The best matchup of the week in Elo’s eyes is Philadelphia at San Francisco, which matches Nos. 6 and 10 in our rankings. But as far as marquee games go (measured by the harmonic mean of the two teams’ pregame ratings after adding half the home-field advantage to each side), it’s the worst week-leading matchup of the season yet.

Even so, there are some interesting pairings to be had, in addition to Eagles-Niners. Elo considers Washington and the New York Football Giants to be a classic “pick ’em“, while Vegas sees Washington as three-and-a-half point favorites, perhaps underestimating just how bad of a period this is in the franchise’s history. Likewise, Green Bay is a one-and-a-half point favorite at Chicago despite Elo pegging the Bears as five-point favorites. How much of that is owed to the Bears’ banged-up defense, and how much simply stems from a refusal to believe the Packers aren’t the same team they were several years ago, is tough to say.

Finally, a couple of NFC South teams are getting a lot more love in Vegas than the ratings say they deserve. The books have both Atlanta and New Orleans favored by 3 on the road this week (the Falcons visit Minnesota; the Saints go to Dallas), while Elo thinks Vegas is off by about 5 points in each matchup — enough to swing the expected winner of both games. In general, Elo has the NFC South as the fifth-best division in football, but if both teams buck the odds and live up to those spreads on the road, our computer might have to change its tune.