We rolled out our NFL Elo ratings last week, giving us a set of computer power ratings for each team, each week, going back to the 1970 AFL-NFL merger. There are a lot of cool things we can do with these numbers; for example, I used them Monday to quantify how upset-heavy Week 1 of the 2014 season was compared to past opening weeks.

But one of the best features of Elo ratings is that they represent a rolling estimate of a team’s strength, informed by new outcomes and previous results. After computing them, we can measure when a team appeared to be at its strongest (or weakest). So, in this edition of “Fun With NFL Elo Ratings,” let’s pinpoint when each NFL franchise hit its all-time (well, since 1970) high and low points.

For example, the Seattle Seahawks currently have an Elo rating of 1685, which is very nearly the best they’ve ever had as a franchise (their all-time high, 1761, was achieved the night of their dominant Super Bowl victory over the Denver Broncos in February). Meanwhile, Washington’s current rating of 1374 is very nearly the worst in the team’s post-merger history (a mark the team set in December after a 20-6 loss to the New York Giants). And for some franchises, such as the New York Jets, their current rating (1470) is almost exactly halfway between their all-time high (1680, achieved after a win over the Jacksonville Jaguars in 1999) and their all-time low (1250, achieved after a loss to the Miami Dolphins in 1996).

We’ve summarized that information for each team in the following chart. The gray dots represent the best and worst Elo ratings achieved by the franchise since 1970, and the red dot represents the team’s current rating. It’s a good way to show where on the spectrum of its historical performance a team is residing, as well as the kind of variance it has had between good and bad teams in its history. 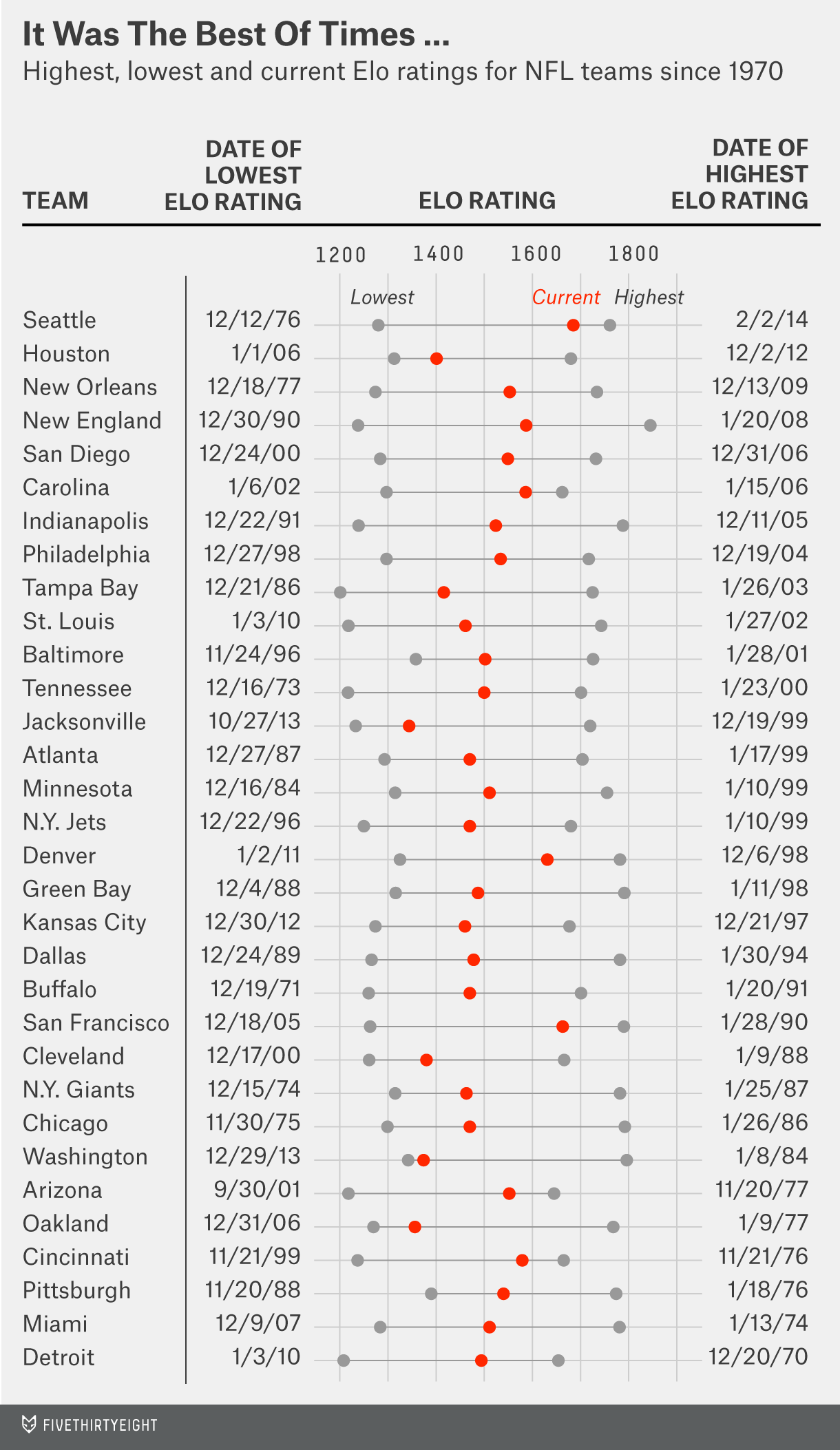 A few observations: The New England Patriots have experienced the highs and lows of the NFL like no other team — the difference between their best (1845) and worst (1238) rating was bigger than that of any other franchise. At the other end of the spectrum, the Carolina Panthers, Baltimore Ravens and Houston Texans have had the smallest range of Elo values, which makes sense, given all three came into existence in the mid-1990s or later.

Among long-standing teams, the Pittsburgh Steelers have had the smallest range; their worst-ever Elo rating (1390) was easily higher than any other team’s worst mark. That fact plays a major role in why the Steelers also have the highest midpoint between their best-ever and worst-ever ratings (1582). Meanwhile, the poor Detroit Lions have the lowest midpoint between their best and worst ratings (1431), and they also have gone the longest time since achieving their high-water mark.