Week 1 of the 2014 NFL season isn’t over yet — there’s a pair of games Monday night — but through Sunday’s slate of matchups, you might get the distinct sense that upheaval is afoot. The New Orleans Saints lost in Atlanta, the Buffalo Bills beat the Chicago Bears on the road, the Kansas City Chiefs were manhandled by the Tennessee Titans, the New England Patriots lost their opening game for the first time in 11 years, and the Cincinnati Bengals went into Baltimore and handed the Ravens a rare home loss.

According to our pre-game Elo ratings (which are computer power ratings that factor in each team’s strength of schedule and margin of victory, along with a prior of how good it was last season), only 57.1 percent of favorites have won so far this week, which would be tied for the 15th-most chaotic opening week since the 1970 AFL-NFL merger. (The average NFL Week 1 sees 62 percent of favorites win.)

There are alternative ways to measure how upset-happy a week was, though. And when you look at how the games were won or lost, Week 1 (thus far) has actually been less surprising than the typical opening week.

For instance, we can look at the root-mean-square error (RMSE) between the predicted point spreads of games — our NFL Elo ratings can generate an expected point spread for a given game, using the location of the game and the difference in the two teams’ ratings — and the actual point differentials of the games. By that standard, 2014 featured the 13th-most accurate Elo predictions of any opening week since the merger. In other words, the actual margins weren’t far off from what we expected going into the games.

Or we could just look at how much the Elo ratings shifted after each game, on average. One key concept of Elo’s system is that the ratings update based on how unexpected a game’s outcome was; the more surprising the result, the more the ratings change in the face of new evidence. By that metric, Week 1 of 2014 was pretty typical of an opening week: The average game saw a 19.9-point shift in Elo ratings, while the average opening week since 1970 saw a 20.5-point shift per game. 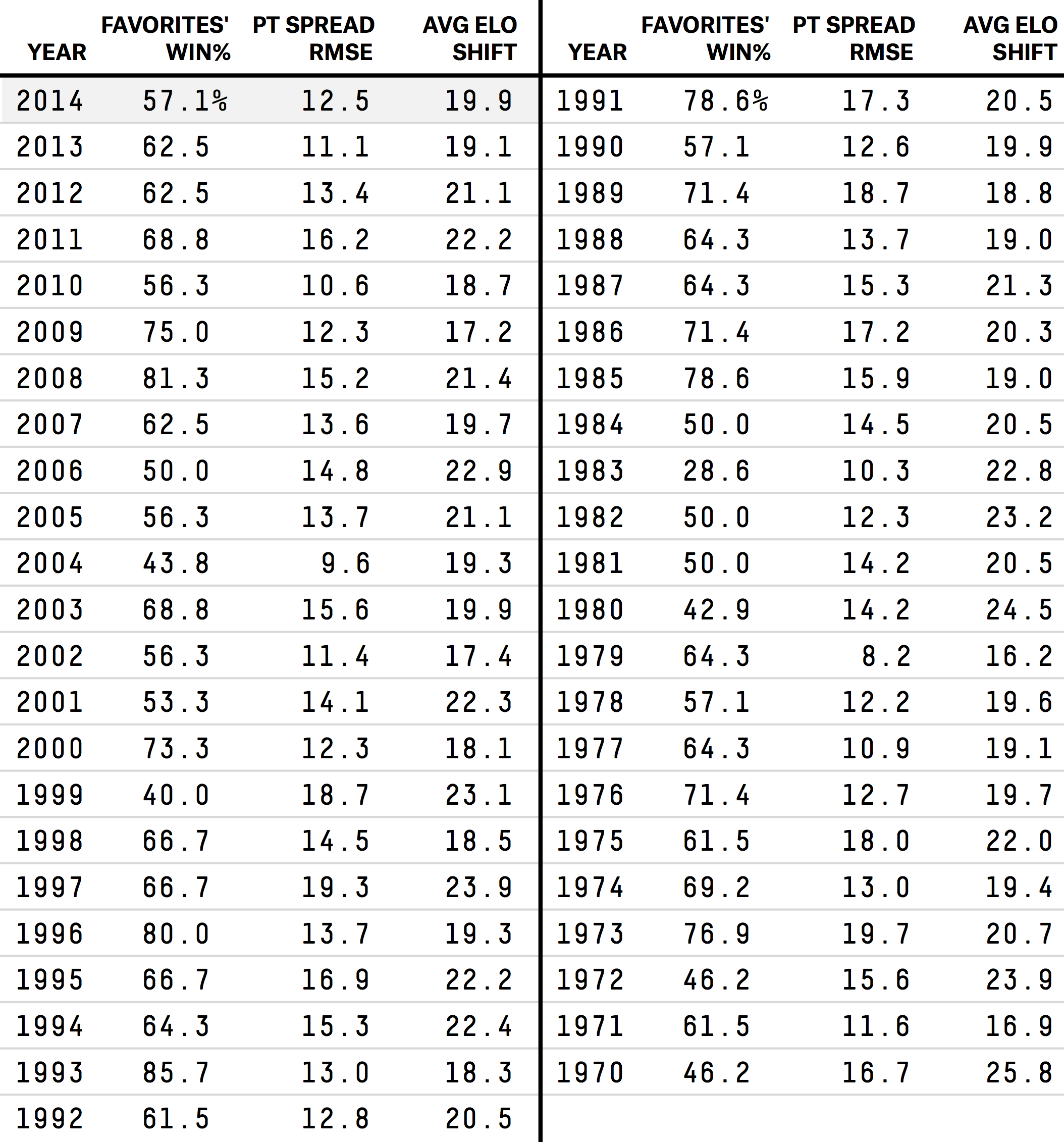 A number of the aforementioned upsets were won by small margins. While the Titans and Miami Dolphins prevailed by double-digits, the Atlanta Falcons and the Bills only won by three points apiece, and the Bengals won by seven in a game where they had the superior pre-game Elo rating (Baltimore was only slightly favored because it was at home). Plus, the rest of the schedule saw things pretty much go according to form, with a few exceptions, such as the St. Louis Rams losing by 28 at home.

In general, we know less than we think when it comes to how good NFL teams are early in the season. But this year, Week 1 has been slightly more predictable than the norm thus far.