Fifteen years ago, Mike Martz had a radical notion: “Why does the run have to set up the pass?”

That, according to Sports Illustrated’s Peter King, was the question the new St. Louis Rams offensive coordinator posed to his head coach, Dick Vermeil, as they prepared for the coming NFL season in June 1999. It was to be Vermeil’s third in St. Louis, and judging from the press clippings, probably his last if things didn’t change in a hurry.1 Over the previous two seasons, Vermeil had coached the Rams to 23 losses and only nine wins, with an offense that ranked 23rd out of 30 NFL teams in passing efficiency and 26th in scoring.

Then came Martz. “I don’t know of any assistant coach that came in, at any one time, in any one program, and made as big a contribution as Mike did at that time,” Vermeil said in a recent interview. In his estimation, Martz’s contribution to the Rams2 was equivalent to that of a first-round pick — and that’s not a hard case to make. Upon Martz’s arrival, the Rams went from laughingstocks to Super Bowl champs with an explosive attack that came to be known as the “Greatest Show on Turf.”

It was, at the time, the third-most potent scoring offense and the second-most efficient passing attack3 the league had seen in its modern incarnation.4 And of even more historical significance, the Rams did it before the league became fixated on throwing the ball.

While the longtime mantra of football coaches everywhere had been to “establish the run” before passing, Martz’s plan was to aggressively pass the ball until the Rams had a lead worth protecting with the run. Stocked with speed everywhere and willing to throw in any situation, the Greatest Show on Turf proved that pass-first teams could win championships, and it heralded the passing fireworks we see in the NFL today.

“If you go back and look at the other teams of that era, the ‘conventional’ teams that you were competing with, [the Rams were] the aberration of the day,” said former Baltimore Ravens coach and current NFL Network analyst Brian Billick, whose head-coaching debut came against the Rams in their 1999 regular-season opener. “St. Louis was so far ahead. It’s hard to say [they were] ‘pass-happy’ because they actually ran the ball pretty well,” he said. “But there’s no question they wanted to throw the ball.”

As Billick noted, St. Louis still could run effectively — running back Marshall Faulk racked up the NFL’s fifth-most rushing yards in 1999 — but that wasn’t the team’s focus. The Rams anticipated what statistical analysts would eventually come to learn about football: Teams run when they win; they don’t win when they run. After using all that passing to build early leads, St. Louis rushed on the league’s sixth-largest proportion of its second-half plays — and no team devoted more of its fourth-quarter plays to running the ball. Martz had successfully flipped conventional football wisdom on its head, using the pass to set up the run just as he had set out to do.

And ever since the Greatest Show on Turf hit the NFL scene, the league has trended toward ever more (and more effective) passing, further enabled by rule changes designed to incentivize every team to spread the field and throw the ball aggressively. 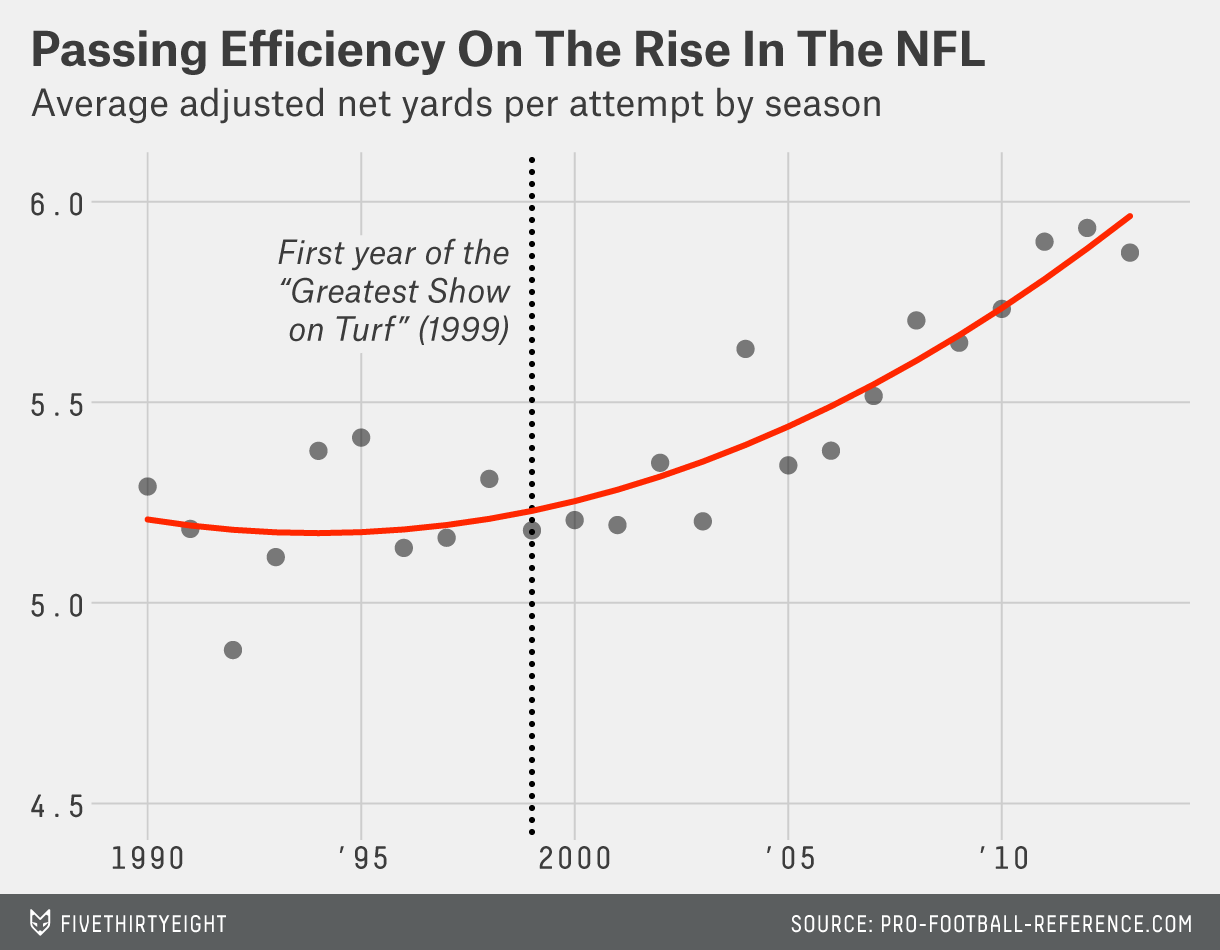 The genesis of the Rams’ aggressive strategy came when Martz was coaching quarterbacks for the Washington Redskins a year earlier. As ESPN analyst Ron Jaworski tells the story in his book “The Games That Changed The Game,” Martz realized that his pass-heavy third-down play packages were too effective to be confined to such a narrow situation.5 “Since we both love these plays so much,” Martz asked head coach Norv Turner, “why can’t we run them whenever we want? Why wait till third down?”

“So what happened was that we decided to run these third-and-long plays regardless of down and distance or field position,” Martz told Jaworski. “To us it simply didn’t matter anymore. This kept defenses guessing — they couldn’t zero in on our tendencies, personnel packages, or formations, because they’d always have to be ready for the big pass.”

Armed with such convention-breaking ideas, Martz represented the most revolutionary branch of the coaching tree originally planted by retired San Diego Chargers coach Don Coryell. Martz’s preferred offensive system, nicknamed “Air Coryell” for its emphasis on defense-stretching pass plays, wasn’t new; as the name implied, the system was first developed by Coryell in the 1960s at San Diego State, and later used to great effect at the NFL level by the Chargers of the early ’80s.6 But it had never been taken to the extremes Martz envisioned upon joining the Rams staff.

During the 1998 season, just three teams passed on more than 50 percent of their first-down plays.7 Running the West Coast Offense under coach Mike Holmgren, the Green Bay Packers threw in a league-high 57 percent of those situations — but gained an average of only 5.8 yards per attempt.8 This was an artifact of the West Coast’s philosophy, which had overtaken the league in the two decades since its creation by legendary coach Bill Walsh. Similar to Coryell’s scheme, Walsh’s offense emphasized passing over rushing, but it focused on stretching the field horizontally with short passes as a means of ball control. By contrast, Martz wanted to throw early and often, but also sought to stretch the field with deep passing.

“If you’ve got a Mercedes,” Martz said at the time, “you don’t keep it in the garage.”

After an offseason overhaul, the Rams possessed the football equivalent of German engineering under the hood. First, they signed accurate passer Trent Green9 to conduct Martz’s mad experiment from behind center. Then, capitalizing on a brewing contract dispute with the Indianapolis Colts, St. Louis heisted Faulk in a trade, giving up just a pair of draft picks for the league’s best all-around running back. Days later, they used the sixth overall pick in the draft on Torry Holt, anticipating a productive pairing at wide receiver with former Pro Bowler Isaac Bruce returning from injury. Even the role players, such as second-year receiver Az-Zahir Hakim, had otherworldly speed.

Vermeil was already a longtime Air Coryell believer,10 and had been trying to install the offense in St. Louis for two years, but lacked the proper personnel. “We had the foundation of it, installed by [former offensive coordinator] Jerry Rhome, the first two years I was there,” Vermeil told me. “I had actually limited [the playbook’s] growth my second year there because we couldn’t complete in the high 60 percent of our throws. So I instructed people to cut back in the volume, hoping that we could improve the execution and the completion percentage.”

With Martz, Faulk, Bruce, Green and Holt in place, such cutbacks were no longer necessary. In the preseason of 1999, Green completed 28 of 32 passes (88 percent) before suffering a season-ending knee injury in the team’s third game. When unheralded backup Kurt Warner stepped in, Vermeil said, Martz and the coaching staff “made no adjustments” to the offensive scheme.

True to Vermeil’s expectations, Warner ended up completing 65.1 percent of his passes, which at the time was the third-best single-season completion percentage by any quarterback ever.11 In addition, the Rams came within striking distance of the 1989 San Francisco 49ers’ mark for the NFL’s second-most efficient passing offense since the merger12

More importantly, the Rams proved that a team could win without establishing the ground game before unleashing holy terror through the air. On first downs,13 St. Louis passed a league-high 59 percent of the time, and gained 7.6 yards per attempt on those throws (11 percent more than the NFL average on all attempts that year) and scored a touchdown on 7.4 percent of them (almost twice the league average across all attempts). On the whole, the Rams passed 5.4 percent more than would be expected from their +9.1 average in-game scoring margin — still the biggest disparity by any Super Bowl winner since the merger. 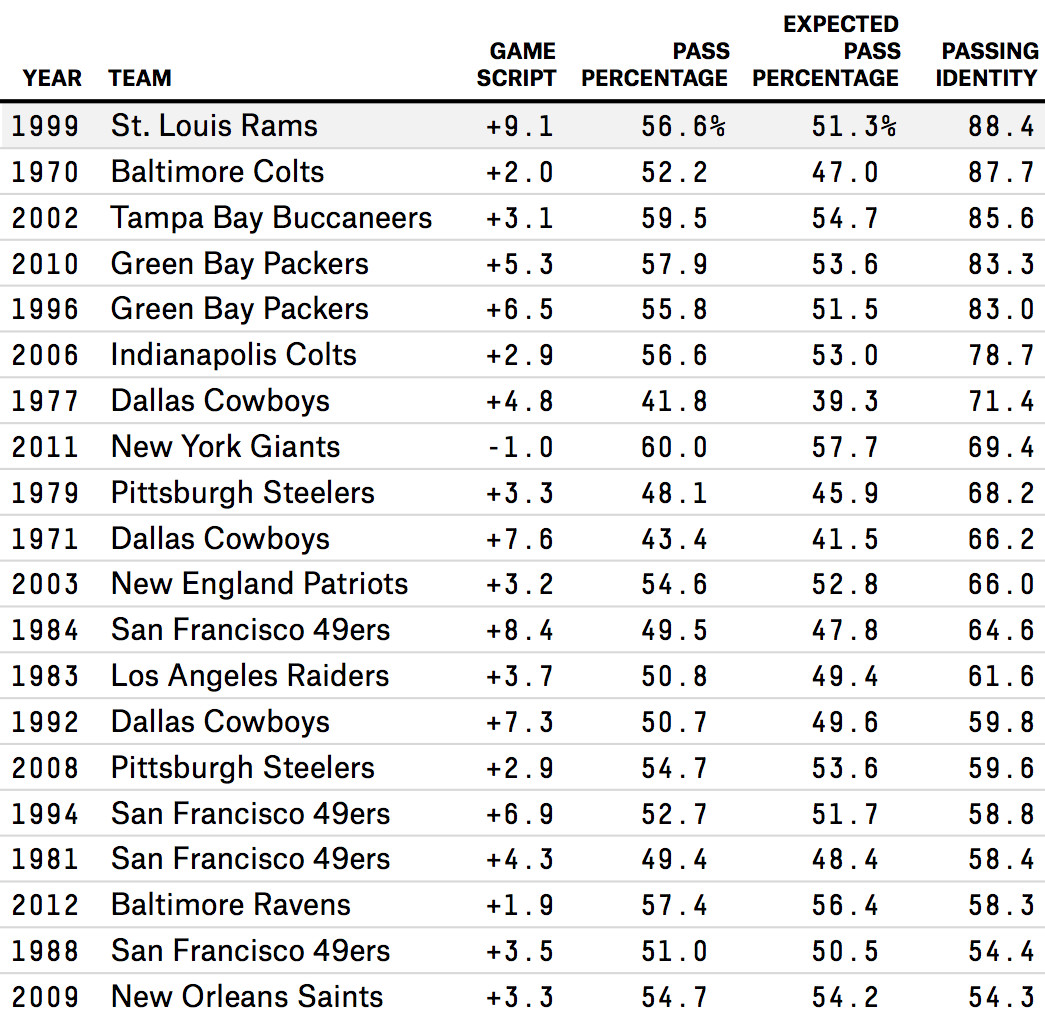 “The spread-out type of system, it really did begin with them, because they were so explosive,” Billick told me. “It was a little bit different [from their contemporaries], but they were very successful with it. Kurt Warner made it work, and they spread you out in a way that very few teams could spread you out — that looks, today, very familiar.”

Although no one knew it at the time, the Rams were at the leading edge of something that was about to take over pro football. The NFL’s average passer rating in 1999 was 75.1 — essentially the same as it had been for a decade — and Warner’s 109.2 rate led the league by a mile. It was, at the time, the second-highest single-season mark ever. Within five years, though, the league-average rating had eclipsed 80.0 for the first time ever, with two players14 surpassing Warner’s rating from 1999. By last season, the average NFL passer rating was 84.1, with Warner’s 1999 mark dropping to 10th all time. Because of their sheer effectiveness, pass-first offensive philosophies have gone from the vanguard (see Coryell’s Chargers, or the various Run-and-Shoot teams of the ’90s) to commonplace over the last 15 years.

The conventional narrative is that Bill Belichick’s New England Patriots finally solved Martz’s offense in Super Bowl XXXVI, limiting the Rams to 17 points by making Faulk a non-factor. But St. Louis still moved the ball well in the loss, amassing 427 total yards while Faulk notched 130 yards from scrimmage.15 And after a disastrous 7-9 season in 2002, a reloaded version of the Greatest Show on Turf emerged behind another obscure QB (Marc Bulger) to tie for second in the NFL in scoring during the 2003 season.16 The true end came later, as the Rams’ talent scattered. Faulk retired in 2006, while Bruce, Holt and All-Decade left tackle Orlando Pace donned unfamiliar uniforms in their twilight years. Martz took his system to Detroit, San Francisco and Chicago, garnering mixed reviews when lesser talents were plugged in.

To the coaches, then, the Greatest Show on Turf was really about the perfect marriage of a high-powered strategy and a gifted roster.

“This game has been, is now, and always will be about talent,” Billick said. “Taking nothing away from the system, you’re talking about Hall of Famers like Marshall Faulk, Kurt Warner — who I believe will be in the Hall of Fame — the talents of an Isaac Bruce and Torry Holt … These were unique talents that the system adapted to very, very well.”

Vermeil concurred. “Very few teams ever have that kind of skill, at one time, on their side of the line of scrimmage,” he said.

It was those players who allowed Martz’s progressive game-planning to thrive, and it was his system that showcased their skills. His fingerprints can still be seen on the league 15 years later.

Thanks to Grantland’s Chris Brown for help with this article.