NFL coaches can be obsessed with their teams’ run-pass balances. (In fact, each staff has an assistant coach who tracks the ratio of run plays to pass plays during a game.) Seattle Seahawks coach Pete Carroll once said his ideal ratio of runs to passes was 50-50.

But passing becomes more necessary as teams trail late in games, both because passes can gain bigger chunks of yardage than runs can in a shorter amount of time, and because it’s usually easier to stop the clock on a passing play than on a run.

Conversely, teams in the lead will pass less because running plays eat up clock time. For example, despite quarterback Tom Brady setting a then-record for touchdown passes in a season in 2007, the high-flying New England Patriots only passed slightly more (as a percentage of their total offensive plays) than an average team that year. Because they obliterated opponents by nearly 20 points per game, there were plenty of times when the Patriots needed to run out the clock with rushing plays.

So looking at raw run/pass ratios isn’t a very accurate way of measuring a team’s tendency to run and pass the ball. To get a clearer picture, FiveThirtyEight contributor Chase Stuart developed a metric he called the “game script,” which quantifies the circumstances under which a game was played by measuring the average point margin at any point in a game (or season). The 2007 Patriots had a game script of +10.3 (the highest of any NFL team since the 1940s), meaning that at any moment in their season, they were leading by an average of 10.3 points. (This is an incredibly high number, considering it weighs every second of every game equally.)

Since the 1970 AFL-NFL merger, a team’s game script explains about 20 percent of its raw run/pass ratio, so the score definitely makes a difference to teams’ play-calling tendencies. Using this extra information, Stuart summed the standard deviations above or below average for a team’s run/pass ratio and its game script in one metric to describe a team’s “passing identity.”

An alternate way of gauging how truly pass-happy a team is, though, would attempt to predict its run/pass ratio (relative to the NFL average) from its game script and measure how much the team’s actual ratio deviated from the expected. Further, we can use the standard error of those predictions to determine in which percentile a team’s actual run/pass ratio was, given the expected ratio from its game script.

By that method, the most pass-happy team in the NFL last season was the Atlanta Falcons. Their game script was -1.2, meaning at any moment they were trailing by an average of 1.2 points. (As far as 4-12 teams go, that’s high; since 1978, the average team with that record had a game script of -3.9, which speaks to Bill Barnwell’s point that Atlanta lost an abnormal number of close games last season.) Since the merger, the typical rate of passes as a percentage of total plays run for teams with a -1.2 game script was 0.8 percent more than average; the Falcons, on the other hand, passed on 10.3 percent more of their plays than average, which is in the 98th percentile of run/pass ratios for a team with their game script. 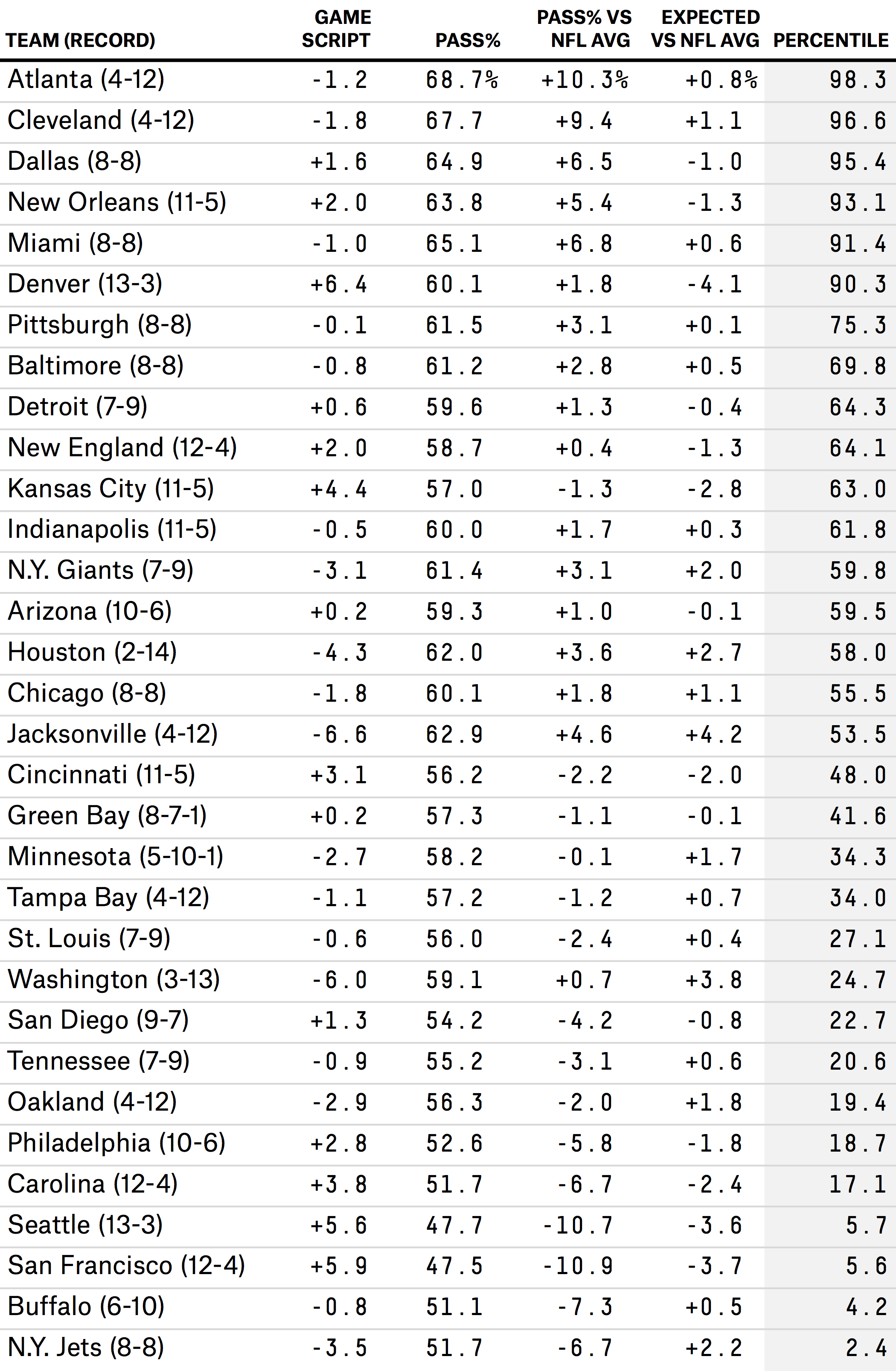 The 2013 Falcons ranked 21st out of all NFL teams since 1970, but the most pass-happy team of all was the 1990 Houston Oilers, who scored a perfect 100.0 by our percentile method. Exemplars of the classic run-and-shoot offense, those Oilers led by an average of 4.1 points in their games, which would predict a rush-heavy game plan that passed 2.6 percent less than average. Instead, Houston passed the ball 13.4 percent more than average — the fifth-highest pass ratio (relative to league average) of any team, regardless of game script, since the merger.

Including those Oilers, here are the 15 most — and least — pass-happy teams since 1970, according to our percentile metric: 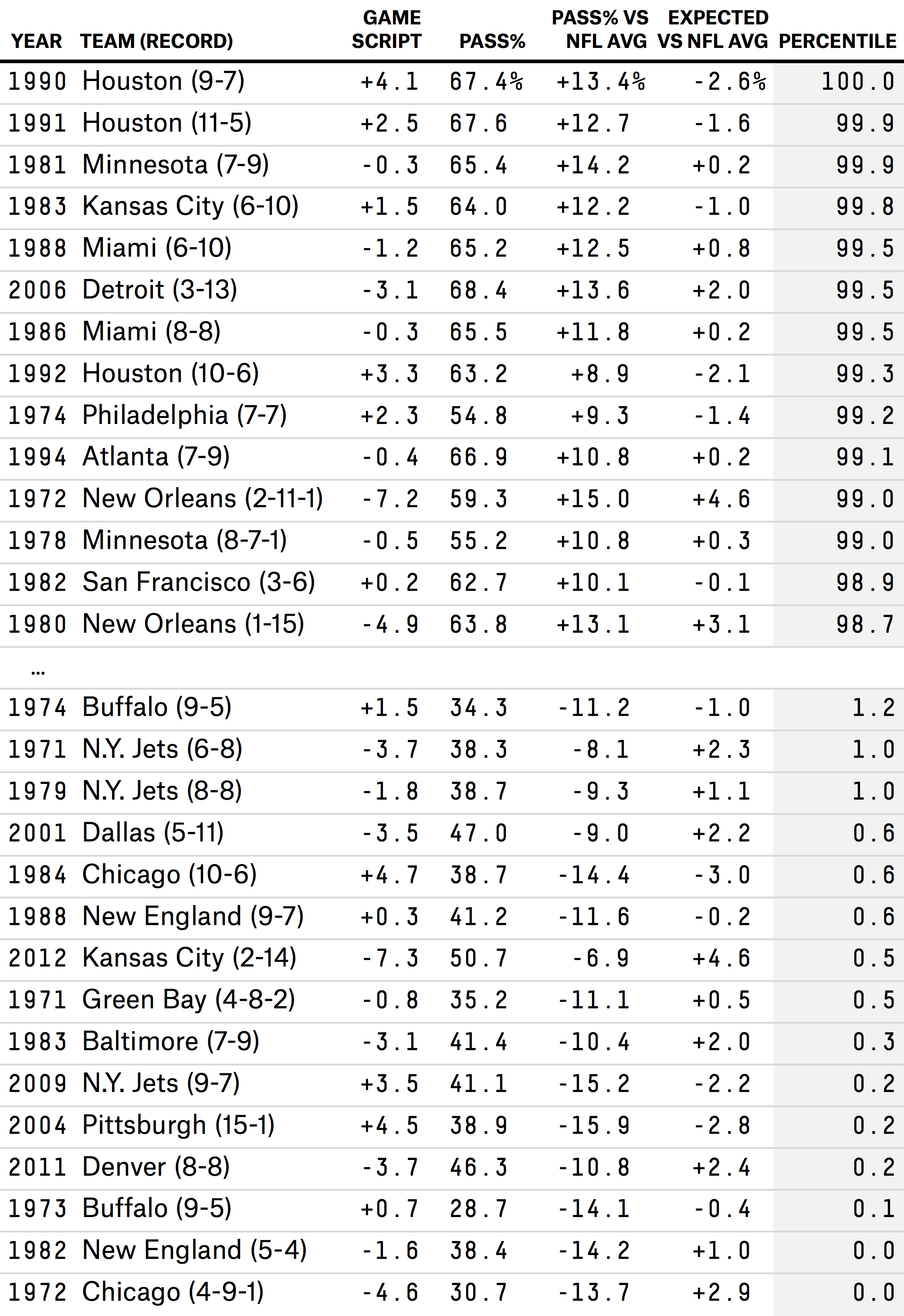