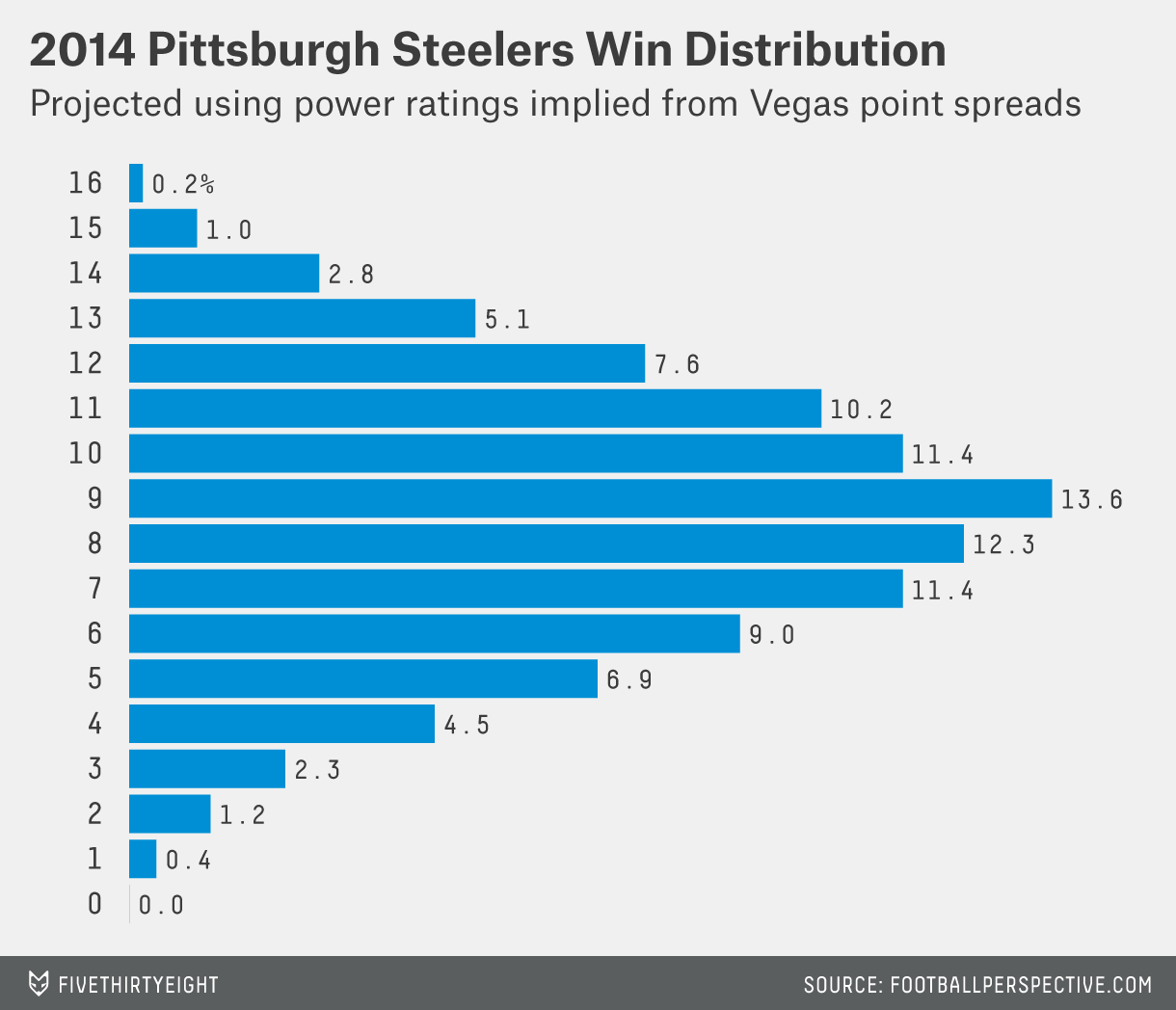 The Steelers missed the playoffs for the second straight season last year — the first time they’d done that since 2000 — and finished 8-8.

Some season previews are claiming the Steelers were the good kind of 8-8, the kind that finishes the season strong instead of fizzling to .500, as they did the year before. Three of the NFL.com analysts who picked Pittsburgh to win the AFC North this season noted the team’s strong finish.

Unfortunately for Pittsburgh, a team that’s the “good” kind of 8-8 probably isn’t any more likely than one that’s the bad kind to do better the next season.

There are other reasons to think Pittsburgh will improve on 8-8, such as the arrival of wide receivers Lance Moore and Darrius Heyward-Bey to bolster the passing game. But the timing of the Steelers’ eight wins last year isn’t one of them. 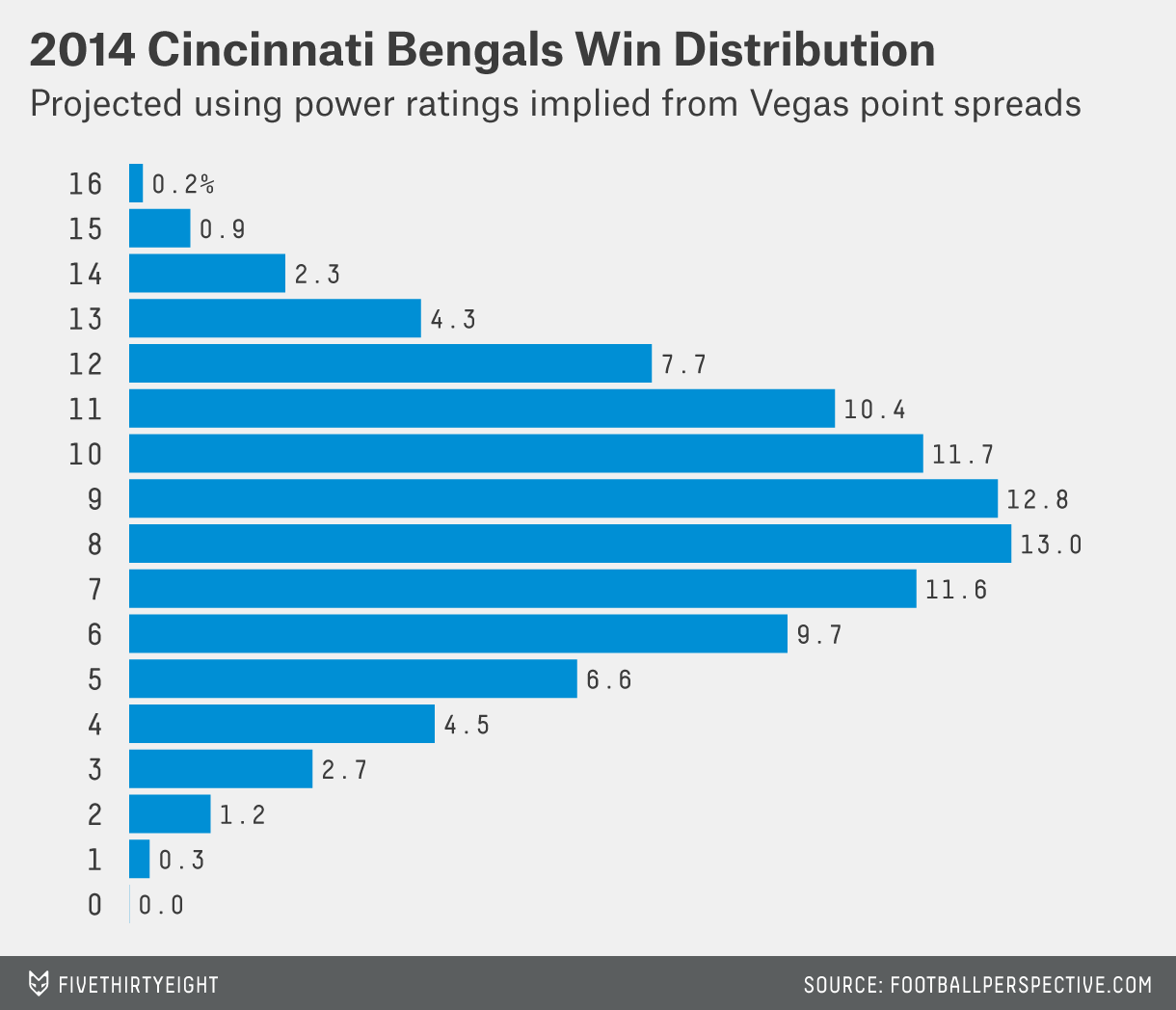 To take a chance on the nation’s best collegiate running back, teams used to need a top-five pick in the NFL Draft. These days, it only takes a second-rounder. The Bengals have taken a running back in the second round in each of the last two drafts — UNC’s Giovani Bernard last year and LSU’s Jeremy Hill in May — making them the rare team investing in running backs as those players become more replaceable.

The stock of the draft’s top back seems to plummet each year. In 2011, Mark Ingram was the first back chosen when the Saints took him with the 28th pick — the latest the first RB had come off the board in at least half a century. Last year, Bernard, the first RB taken, was picked 37th. And this year, Hill went at 55th — just one pick after the first back chosen, Bishop Sankey, who went to the Tennessee Titans.

It’s no wonder Bengals coach Marvin Lewis feels comfortable relying on non-first-round picks to power his rushing game. The two top backs in his first year with the club were Rudi Johnson and Corey Dillon, who were drafted by Cincy in the fourth and second rounds, respectively, yet rank third and first on the franchise rushing yards list.

Dillon and Johnson were great finds late in the draft in part because several backs were selected before them. But despite being later picks, Bernard and Hill are still some of the more highly touted backs of their draft classes. In projecting how good they’re going to be, we should make sense of where they stand relative to other running backs in the draft, not where they were selected overall.

Despite the increasingly conventional wisdom that running backs are easily interchangeable roster pieces, teams are about as accurate as they’ve ever been in predicting which backs in any given draft will have the most valuable careers. In other words, the first back chosen has about the same chance of having a better career relative to the 10th back chosen as he did 50 years ago.3

That doesn’t mean there aren’t still duds, such as Chris Perry, whom the Bengals chose late in the 2004 draft’s first round and who ran for only 606 career NFL yards. Cincinnati might someday regret either Bernard or Hill, or both, or merely the decision to draft them so close to each other. At least it didn’t have to use a first-round pick. 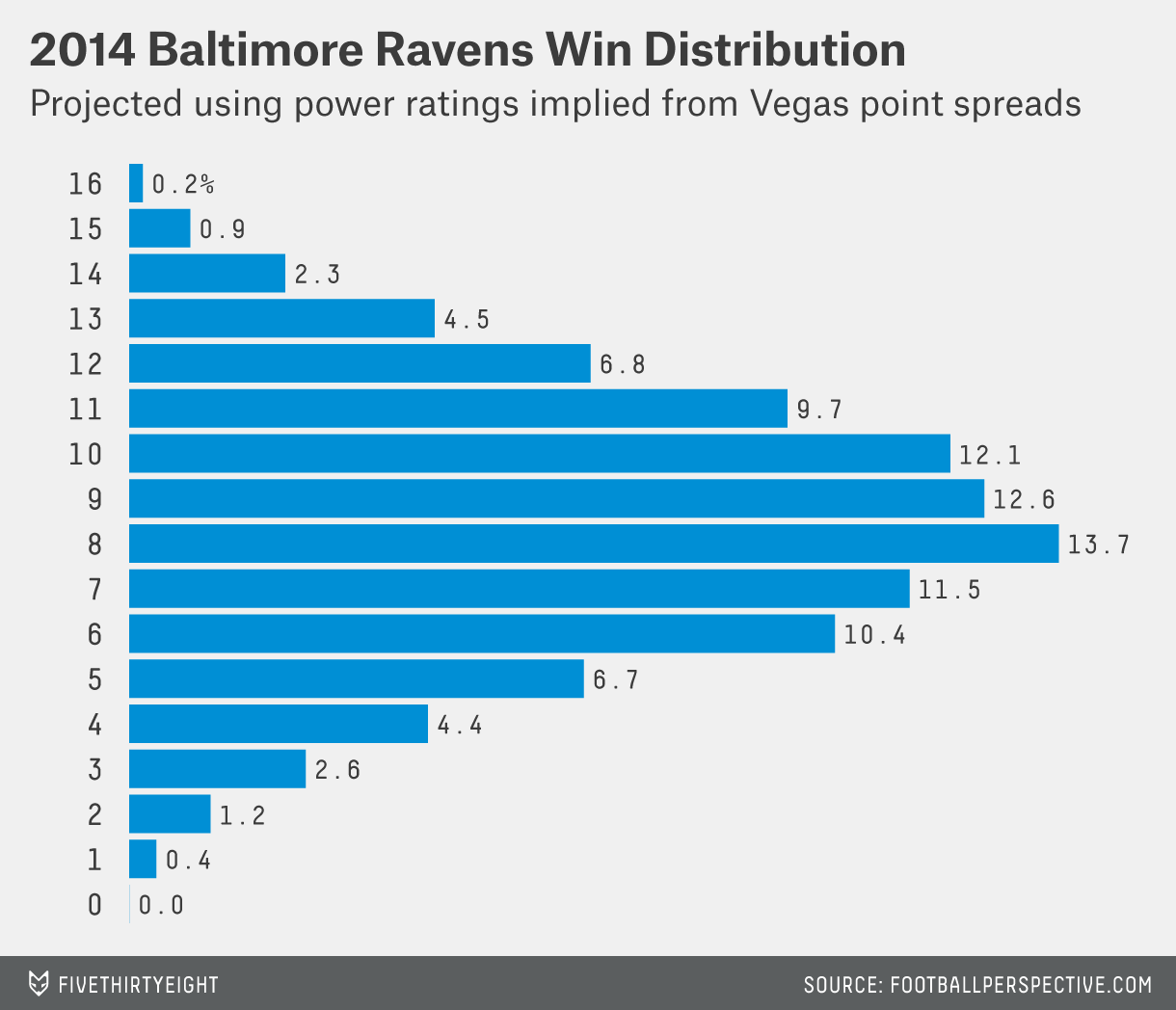 In early 2013, Flacco had a postseason for the ages, throwing 11 touchdowns, no interceptions and more than 1,140 yards in four games, two of them against top-six passing defenses by adjusted yards per attempt. Then he stumbled through the following regular season, with just one game even approaching the statistical standard he’d set the prior winter.

To estimate just how unlikely Flacco’s run was, I started with his adjusted yards per attempt in each game of his career. Then I adjusted that adjusted stat a little more, accounting for home-field advantage and computing his performance relative to the average AY/A allowed by the opposing defense.

I found that three of his four games in the 2012 postseason were way above his average level. Two were more than two standard deviations better than his average. In any given game, Flacco had a 1.6 percent chance of putting up numbers that were equivalent to or better than his best game of that postseason. I took the conservative route and figured that each of these three games had a 5 percent chance of happening at any time — about the likelihood Flacco had of performing the way he did in his third-best postseason game. Then I calculated the chance he’d have at least three of those excellent, 1-in-20 games in any particular four-game stretch. It was about one chance in 2,000.

That looks really rare. But such a fluky run looks less fluky when we consider all 106 four-game stretches of Flacco’s six-year career. There’s about a 95 percent chance that somewhere in there a quarterback of his standard — above average but not great — would have a four-game stretch with three games well above his average.

No one would have noticed if Flacco had saved his career-best performance for four relatively meaningless regular-season games. His concentrated brilliance only really mattered because he delivered it in the postseason. Here Flacco’s run gets fluky again. He had just a 0.2 percent chance of playing so well in the playoffs thus far in his career, given the number of trips he’s made to the postseason (five).4

Flacco’s poor 2013 season dragged down the chance he’ll return to that level of brilliance. His most recent four games were each well below, not above, his career averages. He’s unlikely to repeat his Super Bowl-winning transformation into Joe Montana; the Ravens would settle for his transformation back into the solid, above-average Joe Flacco he was before. 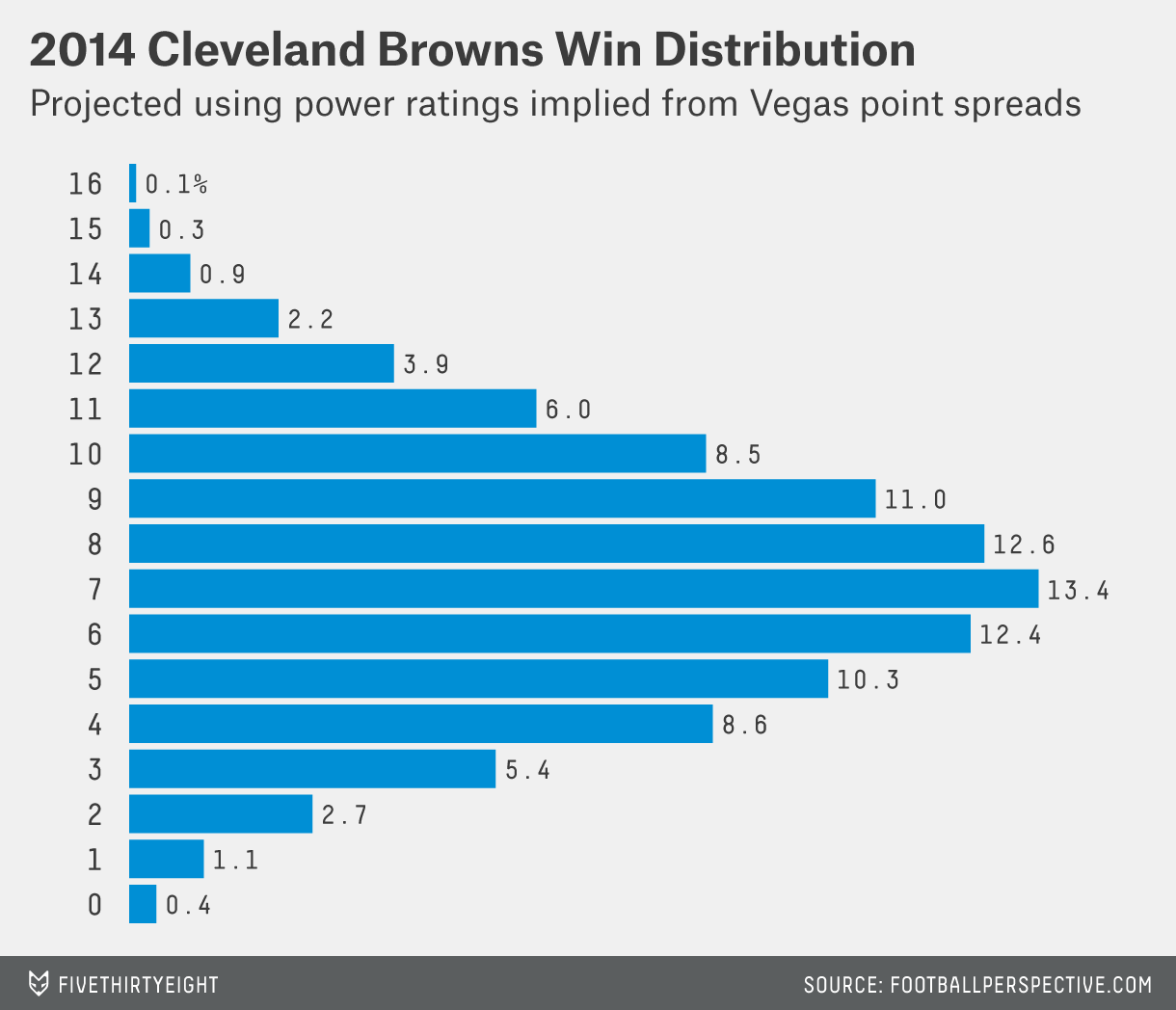 Josh Gordon was one of very few bright spots for the Browns last year. In just 14 games, the then-22-year-old receiver gained a league-best 1,646 yards and scored nine touchdowns. His receiving yardage was the most any player accumulated in 14 games or fewer since 1961.

Even though my colleague Neil Paine showed God doesn’t hate Cleveland, the Browns’ earthly problems continue: Gordon failed several drug tests and is suspended for the whole season. With him goes 41 percent of Cleveland’s receiving yards last year — and any hope the Browns might have held of sneaking out a title in this scrambled division.

Or does it? Not all receiving yards are created equal. Traditional stats don’t note when receivers pile up yards because of favorable conditions such as weak opposing defenses, a pass-happy era or a great passer on the roster. FiveThirtyEight contributor Chase Stuart tried to correct for these factors last year at Football Perspective with what he called True Receiving Yards. Using TRY, Gordon’s stats look much more mundane. He gained less than three-quarters of a true yard for every receiving yard in the box score during his two NFL seasons. That’s the lowest ratio for any receiver with at least 1,000 yards in the history of the NFL, which figures since Gordon caught his passes in the passing-friendly present.

Less than three-quarters of a yard still sounds better than nothing for a team that didn’t draft a receiver in May. But Gordon’s discounted production still might overstate his value to his club. Did he make his quarterbacks, and Cleveland’s overall passing game, any stronger?

Paine also studied that question. His with-or-without-you (WoWY) analysis5 gives extra credit to guys like Randy Moss who turn journeymen quarterbacks into Pro Bowlers. So far, Gordon isn’t helping Cleveland QBs nearly as much as his raw stats suggest. His WoWY score is essentially zero: His quarterbacks have just as high age-adjusted adjusted yards per attempt figures with him as without him. Brandon Weeden wasn’t much worse in last season’s opening two games, in which Gordon didn’t play, than he was when throwing to Gordon over the rest of his career. And Jason Campbell, who’d never before thrown at least 100 passes in a season for a team with a receiver with 1,050 receiving yards, performed below his career average with Gordon last season. One factor that may make Gordon less effective than his raw totals suggest: His catch rate was just 55 percent last year, well below many other leading receivers.

With just two seasons under his belt, Gordon may not have generated a large enough data set to get fair treatment from this approach. A season without him may be the opportunity Cleveland’s quarterback — whoever ends up getting most of the starts — needs to demonstrate just how bad he is without Gordon to catch his passes. But we can already say that Gordon hasn’t yet made quarterbacks look better in the box scores. So the Browns probably aren’t cursed. Unfortunately, they’re just not very good, with or without Gordon.