The Browns’ trade to use the 22nd pick in the 2014 NFL draft on former Texas A&M quarterback Johnny Manziel1 was the latest in a long line of Cleveland sports decisions that made some outsiders chuckle with schadenfreude. Most cities’ risky draft decisions are rightly taken as isolated incidents, but Cleveland’s are interpreted as the symptoms of an ongoing sports catastrophe. If nothing changes before the end of the calendar year, it will have been a half-century since Cleveland last hosted a champion ball club in any major professional sport.

Fifty years is a long time to go without a championship — the longest drought for any U.S. city with two or more major league pro teams in modern history.2 As is to be expected, fans have turned to curses and other voodoo to explain the dry spell. My colleague at Grantland Bill Simmons has a “God Hates Cleveland” gag that he’s been revisiting for years.

But the probability of a two- (or more) sport city going 49 straight years without a league crown isn’t impossible, especially if we account for factors like varying talent levels and league expansion since the city’s heyday. Even if Cleveland had teams that weren’t any worse than other cities’ teams, there’s still a chance it would have incurred its championship drought by chance alone. That doesn’t mean Cleveland is cursed — just that it hasn’t been very lucky, or good.

Measuring the probability of past events is always tricky. Once something’s already happened, there’s an inclination to misinterpret how special the occurrence really was. For example, it’s tempting to say we can derive the chances of Cleveland’s 49-year winless streak by taking its teams’ odds of failure in each year and multiplying them together. If we do this with naive yearly probabilities — assigning the same probability of success to every team in the league — the chance that no Cleveland team would win a championship in any of the city’s 143 team-seasons since 1964 is a microscopic 0.3 percent, or a roughly 1-in-317 chance of going 49 straight years without a title.

But that answer isn’t the right one. The naive approach is fine if we want to know the odds that one specific, pre-selected city would fail to win over a specific range of years. But when people ask whether Cleveland is cursed, they’re actually musing on the odds that any city could be so unfortunate.

This gets at a fallacy of conditional probability known as the “Wyatt Earp Effect.” (That’s the second time I’ve covered Wyatt Earp in the past week — what can I say, we’ve been watching a lot of Westerns at FiveThirtyEight.) Earp was known for participating in a large number of gunfights and never being wounded in any of them, a feat that seems improbable in hindsight. But given the sheer number of shootouts in the Old West, it was actually pretty likely that somebody would make it out alive.3

The latter probability (the odds that some non-specific entity would accomplish a feat) is the true probability of a past event, untainted by the bias of hindsight. Our naive method focused on Cleveland’s chances; our new method focuses on any one city’s chances of being the special case. After more than a century of American professional sports, it’s much more likely that some city would string together many consecutive years of failure, even if the odds for any specific city are still low.4

With Earp by our side, let’s go back to the naive probability from earlier. Instead of just multiplying the chances that Cleveland would go 0-for-143 over the past 49 years, I ran a simulation for all leagues going back to 1903 and looked for the number of times any two-sport city did not win a championship in 49 straight years. That probability is much better than our naive one: 1.6 percent (1 in 62) instead of 0.3 percent (1 in 317).

When I plugged Cleveland teams’ basic championship probabilities (i.e., if a team played in a 30-team league, its chance of winning the championship would be 1 in 30) into the simulation, their expected number of championships since 1903 was 12.4. That’s only 0.4 more than they actually won in real life, even after going nearly a half-century without any titles at all. So, if you take the long view, Cleveland hasn’t been cursed at all. Its teams simply front-loaded their championships, winning 5.2 more than random chance says they should have over the 62 years between 1903 and 1964.

But even that approach is still too simplified. We know that championships are not drawn at random, and that not every team has the same probability of winning before each season. The fact that certain teams are stronger than others — oftentimes perpetually so — is another consideration that makes streaks of Cleveland’s magnitude more likely. If we account for the differing strengths of teams in our championship probabilities for each season,5 the odds that any city would go 49 or more consecutive seasons without one jumps up from 1.6 percent to 2.9 percent. 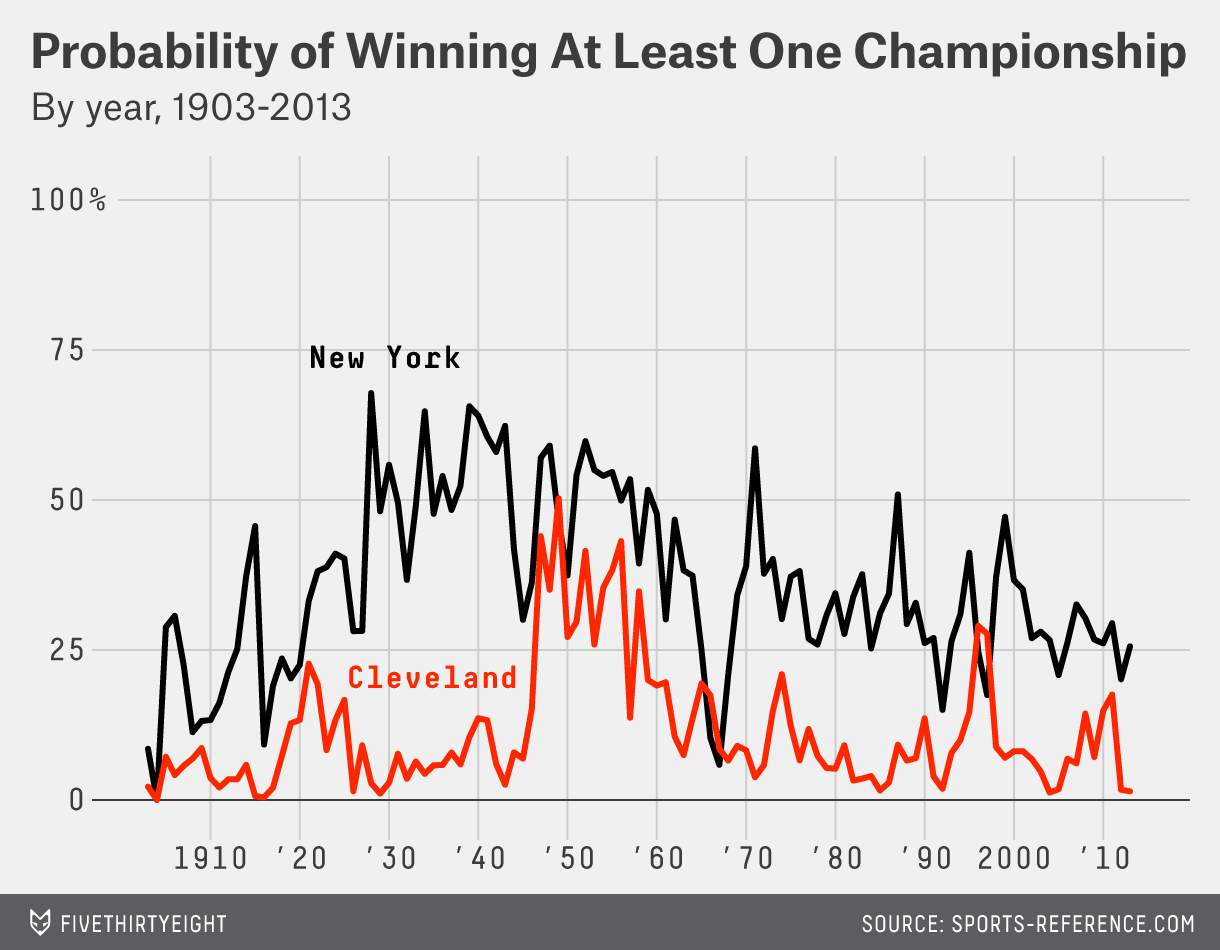 In other words, it’s still improbable that a city would go so long without any postseason success — but there’s still a 1-in-34 chance, far more likely than our first naive, non-Earped calculation of 1 in 317. 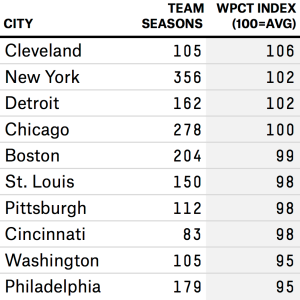 In addition to bad luck, bad teams have also factored into Cleveland’s drought. Aside from the various flukey late-game collapses of the city’s sports lore — “The Drive,” “The Fumble,” “The Shot,” “Red Right 88,” etc. — Cleveland had the poor fortune to see its teams dramatically fall off in talent at nearly the same time. Through the 1960s, the collective average winning percentage of Cleveland’s pro teams (normalized across sports)6 was easily the best of any major city going back to 1903, including a consistently solid run by the Indians of the 1930s to the 1950s and a stretch where the Browns appeared in their league’s championship game 11 times in 12 years from 1946 to 1957, winning seven times (see left).

By contrast, ever since the 1960s, Cleveland’s teams have been quite weak on average. If Cleveland had been lucky enough to stagger its successful runs in baseball and football across different eras, it’s unlikely the city would be looking at a streak of 49 years without a championship.

Exactly why Cleveland’s been so bad for so long is beyond the scope of this article. (Though there is a temptation to extend the blame for Cleveland’s sad streak to its economic decline.) What we do know: Cleveland’s teams found themselves caught in a perfect storm of bad players, bad luck and bad timing. Looking forward, perhaps Johnny Manziel will be able to turn the city’s fortunes around,7 or maybe he’ll flame out spectacularly. Just don’t blame a curse.