The Philadelphia Eagles are 2-0, but they’re living dangerously. The Eagles fell behind 17-0 against Jacksonville on opening day before hanging 34 unanswered points on the Jaguars defense. And Philadelphia was at it again in Monday night’s victory over the Indianapolis Colts. Trailing 20-6 at one point in the third quarter, the Eagles came back to win on a Cody Parkey field goal as time expired.

Philadelphia has an average points-per-game margin of +10 so far this season, which ties it for fifth-best in the NFL. If you look at how the Eagles’ games have developed, though, you’d never guess they’d have such a positive scoring margin. To measure this phenomenon, FiveThirtyEight contributor Chase Stuart has created a metric called Game Scripts, which attempts to more accurately measure how the totality of a game played out beyond the final score line. A team’s Game Script in a given game (or season) is its average point margin at any given moment.

Adding those two winning percentages up, we’d expect the Eagles to have won just 0.26 games so far this year, based on the degree to which they’ve trailed and the amount of time they’ve spent trailing. That represents a huge difference from their actual win total (two). Through two games, it’s the biggest difference between actual wins and Game Script-predicted wins of any team since 1978 (when the league expanded to a 16-game schedule in 1978). 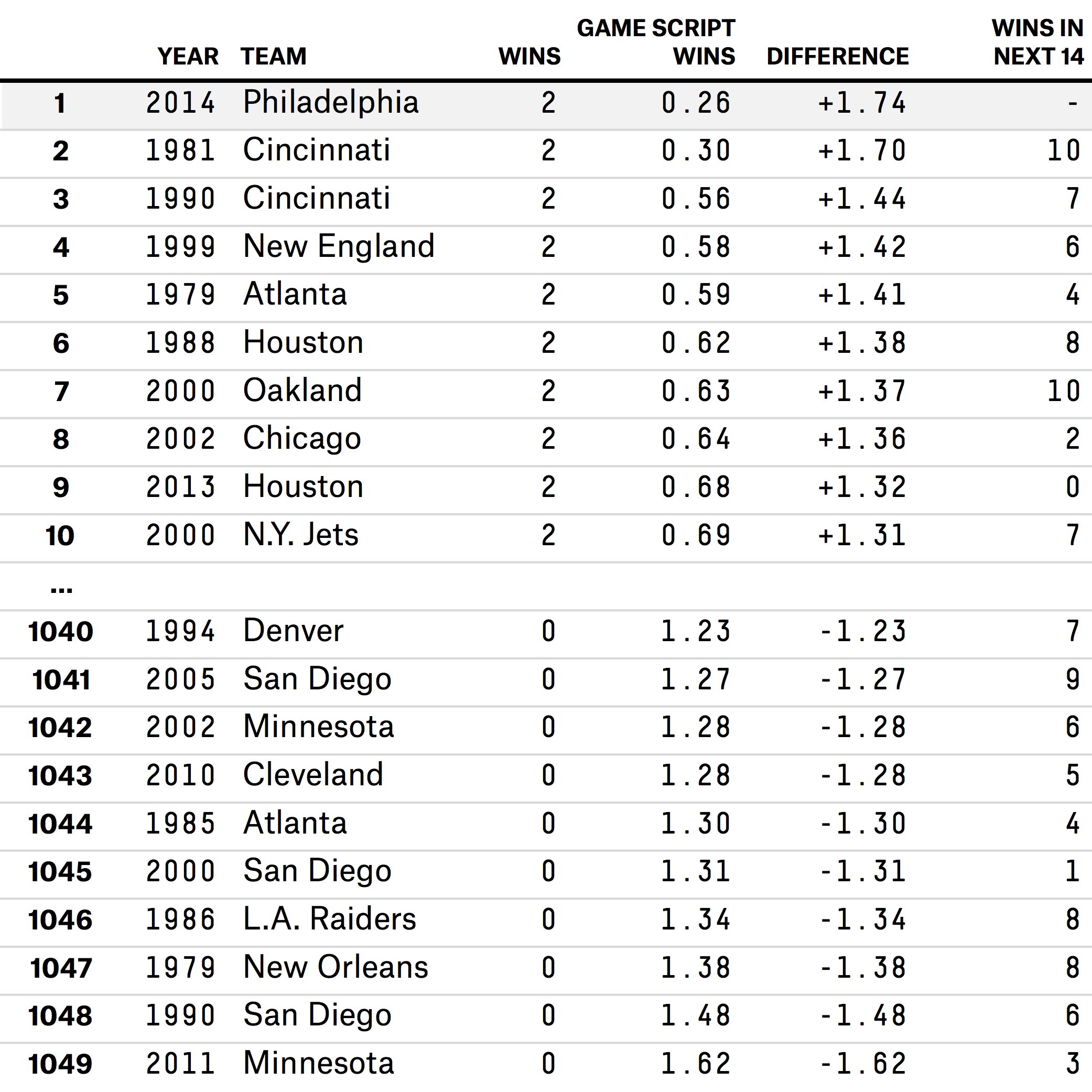 But that gap is probably unsustainable. After all, impressive late-game comebacks aren’t necessarily very predictive of how a team will play in the future. However, I decided to test which statistic was a better descriptor of a team like the Eagles: two actual wins in two games, or 0.26 Game Script-predicted wins?

For both metrics, I looked at teams’ two-game starts to the season (excluding strike-shortened campaigns) and their records over the remainder of the season. For example, the average 2-0 team ended up winning eight games out of its next 14. So just from Philadelphia’s record alone, we’d expect them to finish the season 10-6. But the average team with 0.26 Game Script-predicted wins through two games won only 5.9 of their next 14 games, which would yield a predicted record of about 8-8 for the Eagles despite the 2-0 start.

For the Eagles, this means they aren’t quite the team we’d expect from their 2-0 record. But they also shouldn’t have their big average deficits completely held against them. Combining the two metrics, we’d expect them to finish with almost exactly seven wins in their final 14 games, which would yield a record of 9-7.