It’s been hard for me to escape the feeling that something’s off about NFL games this year. But that may be the league’s off-field problems coloring my perception of the on-field play — or the inevitable consequence of living in New York City and having the Jets and Giants force-fed into my living room. Statistically, everything has been pretty normal. Through the first two weeks of the season, the average margin of victory has been 12 points — exactly in line with the historical average. There have been a number of upsets, but not any more or fewer than usually occur early in the year.

Week 3 is headlined by a marquee matchup: The Denver Broncos are traveling to Seattle for a Super Bowl rematch against the Seahawks. A less sexy but perhaps equally important game will take place in Glendale, Arizona: the San Francisco 49ers vs. the Arizona Cardinals. The Seahawks and 49ers lost last week, and both play in the NFL’s toughest division, the NFC West. So another loss could be trouble.

Let’s go to the magnetic data-storage tape, or rather, to FiveThirtyEight’s NFL Elo ratings. Elo ratings are a “vintage” statistical formula that we’ve brought to life for the NFL. They account for margin of victory, home-field advantage, strength of schedule, prior years’ performance and nothing else — for more on how they work, click here.

Last week, we referred to the presence of a “Big Three” in the NFL: the Seahawks, 49ers and Broncos. Those teams remain on top of the Elo ratings, although by a narrower margin. The Niners shed 41 Elo points last week, more than any other team, and the New England Patriots nearly overtook them. Perhaps Tom Brady and Bill Belichick have a vintage year left in them?

Any matchup involving the Seahawks, Broncos, 49ers and Patriots would be a good one for the NFL; they are among the more popular teams in the league. The NFL has been fairly lucky over the past several years to have high-profile or big-market teams involved late in the season. But it doesn’t always work out that way. I’m interested in the “Little Four” that lurk just behind the Big Three and rank No. 5 through No. 8 — in order: the Carolina Panthers, Cincinnati Bengals, San Diego Chargers and Arizona Cardinals. These are good football teams, at least in Elo’s estimation. If you’re rooting for the underdog (and/or bad Super Bowl ratings), perhaps a Large Feline Bowl between the Panthers and Bengals is what you’re after.

Below are the projected standings and playoff odds for each NFL team, which are calculated by taking the Elo ratings and simulating the rest of the season thousands of times. 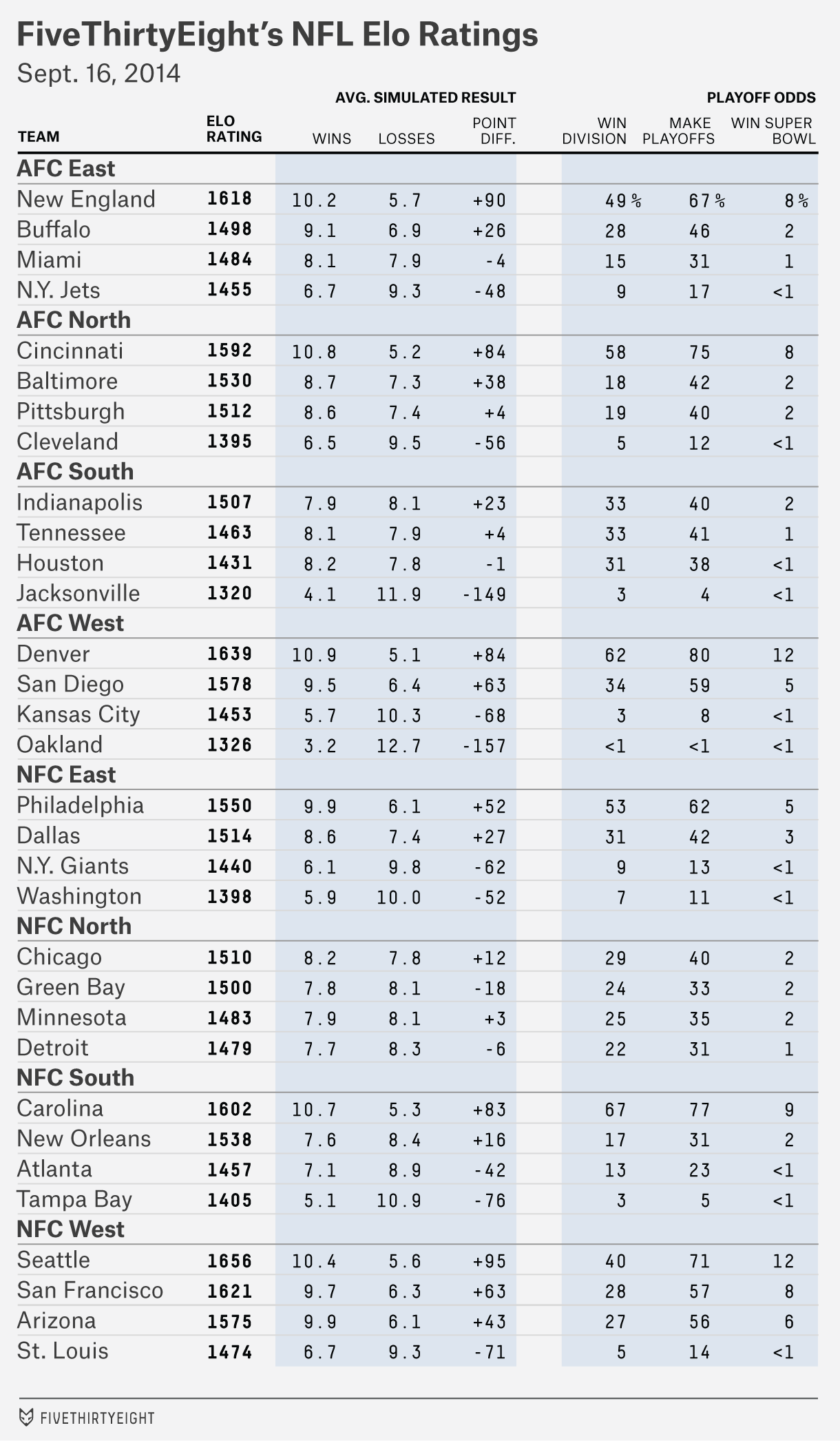 Seattle is 71 percent to make the playoffs. That isn’t bad, but it’s a little lower than you might expect for the best team in the league (and down from 81 percent last week). The problem is its division, which also includes the 49ers and the Cardinals; Elo has the Seahawks winning it just 40 percent of the time.

The 49ers have still less room for error. Last week’s loss against the Chicago Bears dropped San Francisco to 57 percent to make the postseason, down from 78 percent after Week 1. A loss to a division rival like the Cardinals would probably push the Niners below even money.

Other putative playoff contenders have lost twice — most notably, the Indianapolis Colts. The Colts’ probability of making the playoffs is just 40 percent, according to Elo, and they project to an 8-8 record.

But the average 0-2 team makes the playoffs only 12 percent of the time. So Colts fans should be thankful. After facing good teams in Weeks 1 and 2, Indy has one of the league’s easiest remaining schedules. You could debate whether the Colts’ AFC South or the NFC East is the league’s worst division (Elo says it’s the AFC South). Indianapolis can be our randomized control trial — it gets to play both! Nine of the Colts’ remaining 14 games are against a team from one of these divisions.

For a down-on-its-luck team whose season is already over, look at the Oakland Raiders. They project to just a 3-13 record, according to Elo. And they have less than a 1 percent chance (0.8 percent, if you like decimal places) of making the playoffs.

As bad as the Raiders are, those seem like aggressive calls so early in the year. But the Raiders have a tough schedule, with a game against the Patriots this week, two remaining games each against the Broncos and the Chargers, and games against all four NFC West teams. There’s even some chance of a winless season: the Raiders finished at 0-16 in about 6 percent of the Elo simulations. That’s not often, but it’s six times as often as they made the playoffs.

Elo ratings can also be used to project point spreads, although we doubt you’d make a profit by betting on them. Last week, Elo had a 8-7 record against the betting lines as listed at Pro-Football-Reference.com, sitting out one game where its spread exactly matched the Vegas line. The Elo point spreads are 16-15 on the season so far against Vegas. 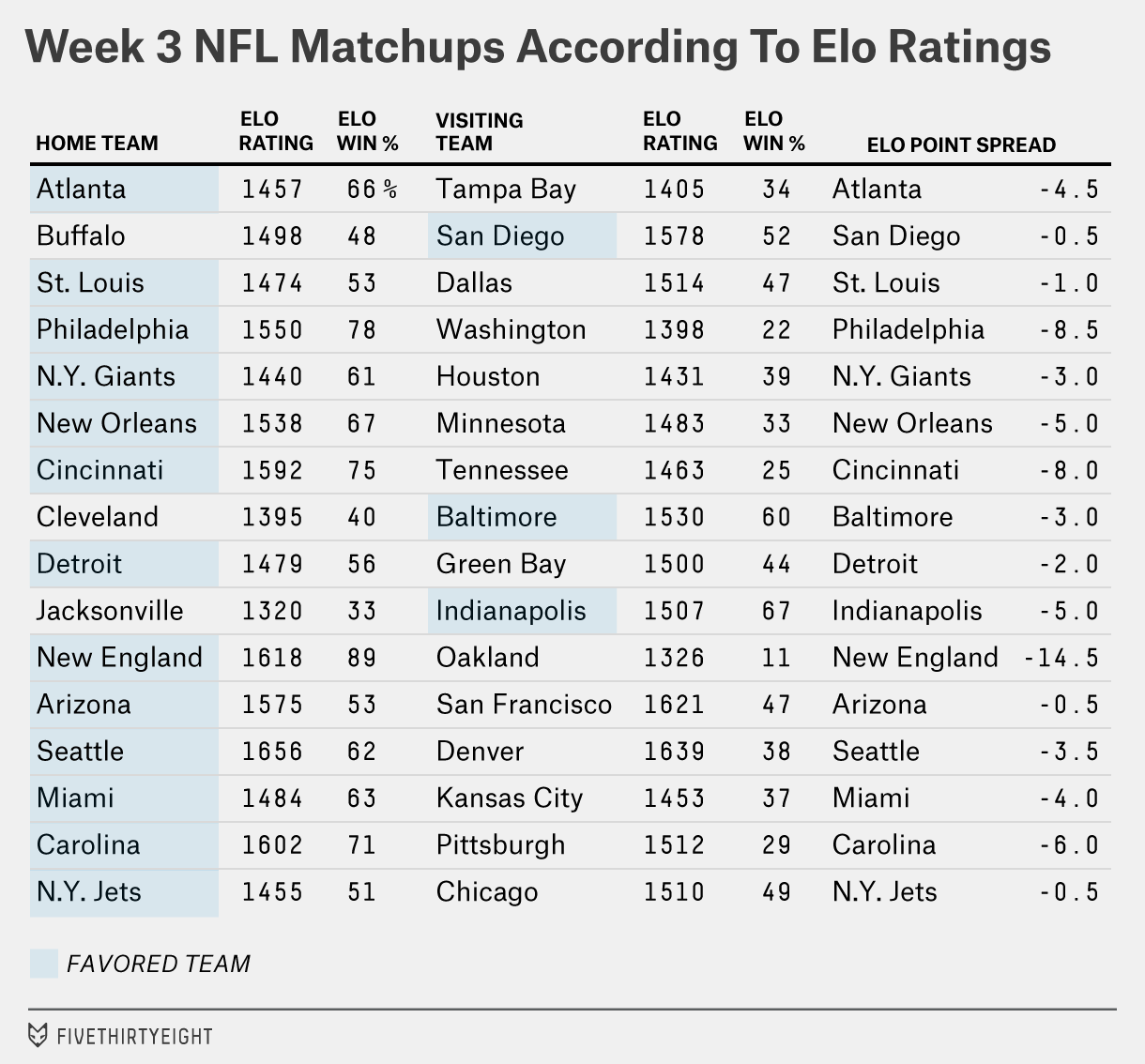 This week, Elo has the Seahawks as three-and-a-half-point favorites against the Broncos, compared to four-and-a-half or five points in the Vegas line. That reflects a bigger difference of opinion than you might think; a four-point Broncos loss (as in Seattle 21, Denver 17) is a plausible enough outcome. But to reiterate, we’re not recommending any bets. Among the many factors that Vegas considers but Elo doesn’t is that the Seahawks have historically had a large home-field advantage.

There’s a bigger discrepancy in the Cardinals-49ers matchup. Bookmakers have the 49ers favored by a field goal, whereas Elo sees the game as a pick ’em and would bet on the Cardinals if forced to lay down some action. Perhaps you could make a case for the Cardinals, who Elo likes because they finished at 10-6 last year despite a tough schedule and because they’ve beaten a playoff team and won a road game so far this year. But never mind the betting line. In terms of playoff implications, this might be the most important game of the young season.