The elevator doors open and he drops her. She falls to her knees, and then to the floor, but her feet prevent the doors from closing. The man is holding the woman’s purse as he tries to move her unconscious body out of the way using his feet, but she won’t budge. He tries picking her up again, but unconscious bodies can be heavy, even for a 5-foot-8, 208-pound running back in the National Football League. Then the video ends.

That video, showing the aftermath of an altercation between Ray Rice and his then-girlfriend (now wife), Janay Palmer, made the rounds this NFL offseason as if it were a Zapruder film. Prompted by the video and an arrest, NFL commissioner Roger Goodell suspended Rice, a star running back for the Baltimore Ravens, for two games, citing personal interviews with Rice and Palmer and the league’s personal conduct policy.

But the punishment felt incommensurate with the crime. “It’s a joke, and a bad one,” ESPNW columnist Jane McManus wrote. How was it possible that Rice was given two games, many exclaimed, when players had been suspended six games for cheating on a test for performance-enhancing drugs (PEDs) and entire seasons for repeatedly smoking marijuana?

On Thursday, Goodell announced a new discipline policy. In a letter to all 32 team owners obtained by ESPN, Goodell wrote that the league fell short in its treatment of the Rice case. “Effective immediately, violations of the Personal Conduct Policy regarding assault, battery, domestic violence or sexual assault that involve physical force will be subject to a suspension without pay of six games for a first offense, with consideration given to mitigating factors, as well as a longer suspension when circumstances warrant.” (This will not affect Rice’s current suspension.) A second offense will result in a ban from the league, with the opportunity to apply for reinstatement after one year.

A six-game suspension, according to data collected by FiveThirtyEight, would be four times what the average suspension has been for domestic violence and an unprecedented consequence for a first offense of any kind. The ban from the league after a repeat offense would be the harshest punishment for all second-time offenders.

Following the Rice incident, I went looking for every NFL suspension1 issued in the league’s 94-year history. I wanted to understand how violations like Rice’s, the ones unrelated to steroid or substance abuse, were determined. If domestic abuse warranted two games, what kinds of conduct violations warranted five games? Eight games? An entire season? I assumed that someone — if not the governing body itself — must keep track of every player suspended, why he was suspended, and the length of the suspension. I was wrong.

When I contacted the NFL, a spokeswoman, Darlene Capiro, responded by email, “We do not have a comprehensive list.” Several of my colleagues at ESPN and Grantland who report on the NFL were unaware of any complete data set. The ESPN Stats & Information group also did not have this information in its entirety, only selected incidents. A spokesman for the NFL Players Association, George Atallah, said the union had at least some of the data but did not provide it after repeated requests.

And so I cobbled it together myself, with the help of the San Diego Union-Tribune’s NFL arrests database, a Wikipedia list dating back to 1947, and the Spotrac suspension tracker.2 I found 263 incidents in that process, and verified suspensions using news reports,3 while making note of the reason for the suspension and the number of games the player ultimately missed.4 The data isn’t perfect, but it’s a good start.

Once I’d categorized the offenses and the corresponding games missed, I had hard evidence of what many already suspected: The NFL’s punishment of personal conduct violations has been inconsistent and on average less harsh than its punishment of drug offenses. 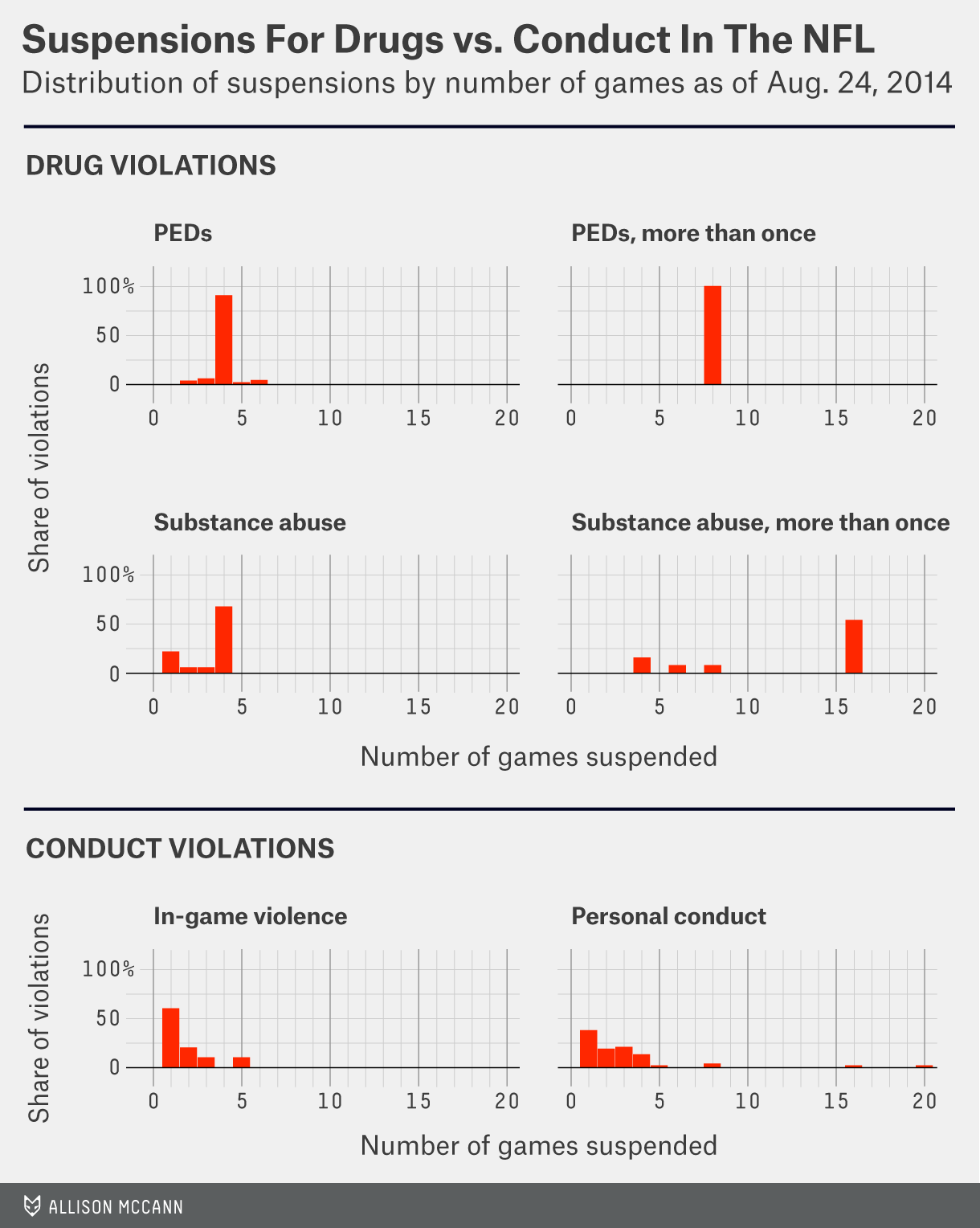 Contrast that with the greater variation in the length of suspensions for personal conduct violations. This catchall category includes everything from murder to unsanctioned in–game violence to embarrassing the league on social media.

Since 2002 (the first instance I could find), 38 percent of conduct violators received a one-game suspension. In this group are Larry Johnson, who spit his drink in a woman’s face, and Ricky Manning, Jr., who assaulted a man outside a Denny’s restaurant. Another 19 percent of players received two games, among them Jeremy Bridges, who pointed a gun at a stripper. Marshawn Lynch was among the 21 percent of players to receive a three-game suspension — after he was arrested for having a gun in his car. Even fewer players — 13 percent — received four games, and their cases ranged from sexual assault to multiple DUI arrests. The longest suspension went to Adam “Pacman” Jones, who was suspended 20 games (the entire 2007 season and the first four games of 2008) for numerous arrests and altercations with the police.

The difference in the NFL’s treatment of drug and conduct violations is a result of the league’s collective bargaining agreement. The CBA does not mention the Personal Conduct Policy, but does explicitly refer to the Policy and Program For Substances of Abuse. The disparity is evident even when you compare the two documents. The one covering drugs is 32 pages. The other, three.

The league’s new regulations are meant to bridge that gap. For years, there has been clear guidance on how to handle drug offenses but no prescription for violent, off-field offenses. Now there will be, and if a player commits a second act of violence, it “will result in banishment from the NFL.” An appeals process is available, but the player must wait a year.

There were only five previous lifetime bans in my database — four were for repeated substance abuse, one was for gambling.6 For comparison, Donte Stallworth, who pleaded guilty to DUI manslaughter in 2009, was out of the league for a year.

The previous inconsistency in punishment of domestic violence became clear when I looked at the 53 personal conduct violations that the league has issued since 2002. The average number of games suspended for all personal conduct violations was 3.0. For the 15 cases of domestic violence that had been punished under the old, nonspecific guidelines, the average number of games suspended was 1.5. 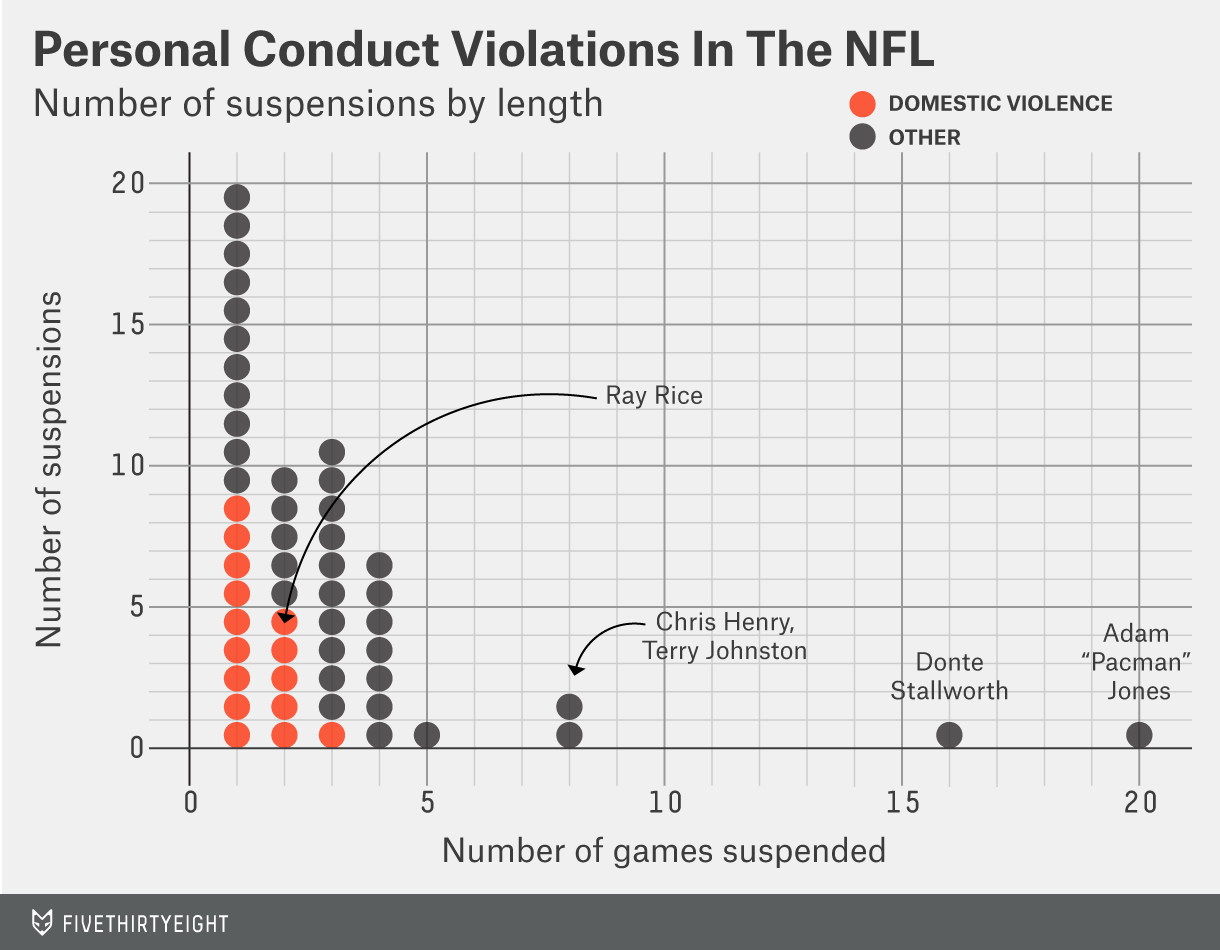 The full data set is in a searchable table below. Originally, there were errors in some of the entries, which we have corrected. The database is as complete as possible, but there may be suspensions I missed. If you know of one, please submit it.

CORRECTION (Oct. 18, 2017, 1:18 p.m.): An earlier version of this story misstated how many indefinite suspensions were in the data set, and how many were for repeated substance abuse. There were five lifetime bans, excluding Ray Rice. And four of them were for substance abuse.