Something marvelous has happened to me. I was transported to the seventh heaven. There sat all the gods assembled. As a special dispensation, I was granted the favor of making a wish. “What do you want?” asked Mercury. … “Choose — but only one thing.” For a moment I was bewildered; then I addressed the gods, saying: “My esteemed contemporaries, I choose one thing — that I may always have the laughter on my side.” Not one of the gods said a word; instead, all of them began to laugh. From that I concluded that my wish was granted and decided that the gods knew how to express themselves with good taste, for it would indeed have been inappropriate to reply solemnly: It is granted to you.

There’s nothing more satisfying than to have the Hacker Gods1 laugh at you, and that’s pretty much what this past weekend of NFL action entailed. So let’s get right to it.

Following Peyton Manning’s costly interception with 2:25 left, down 5 points and in Seattle Seahawks territory, I took the opportunity to tweet the “Comeback King” chart from last week’s Skeptical Football column:

I intended to gently remind people that Manning far outpaces the field in big comebacks, and that taking risks like the one that led to his interception is likely one of the main reasons why.

But then things got crazy. Following a Seattle field goal, Manning got the ball back with less than a minute left, led the Broncos on an 80-yard touchdown drive in 41 seconds, and then scored on a two-point conversion to send the game to overtime. Twitter exploded. High drama, tempers flared, things were said.

Even before the Seahawks took the first OT possession down the field for a touchdown, a number of people were questioning Manning’s comeback cred. The chart I tweeted showed that Manning has come back to win 10 of the 41 games in which his team has fallen behind by 15 points or more, which compares favorably to Tom Brady doing the same in five of 25 chances. Several people seemed underwhelmed by this difference, with many pushing back like so:

@skepticalsports @ESPNStatsInfo also can be stated as manning 25%, brady 20% of the time. doesn’t seem quite as special that way.

Some enterprising tweeters also pointed out that Andrew Luck already has three comeback wins in 13 opportunities, good for 23 percent.

Granted, Manning’s comeback rate is only a few percentage points higher than Brady’s or Luck’s. But that doesn’t make it any less “special.” With the league average at just 5.6 percent, having 10 comebacks in 41 attempts is way, way more ridiculous and impressive than having five in 25.

And those are very carefully calculated “way”s.

Microsoft Excel has a function2 called binom.dist() that can easily tell you the probability of something happening a certain number of times in a certain number of tries (an issue that, in my experience, comes up about every five minutes in life). It’s probably more useful than a sonic screwdriver.

In this case, to find out the odds against each quarterback getting the number of wins he did, assuming they were all exactly as good as the league average,3 we plug in the numbers like so:

That spits out odds that lead to this chart: 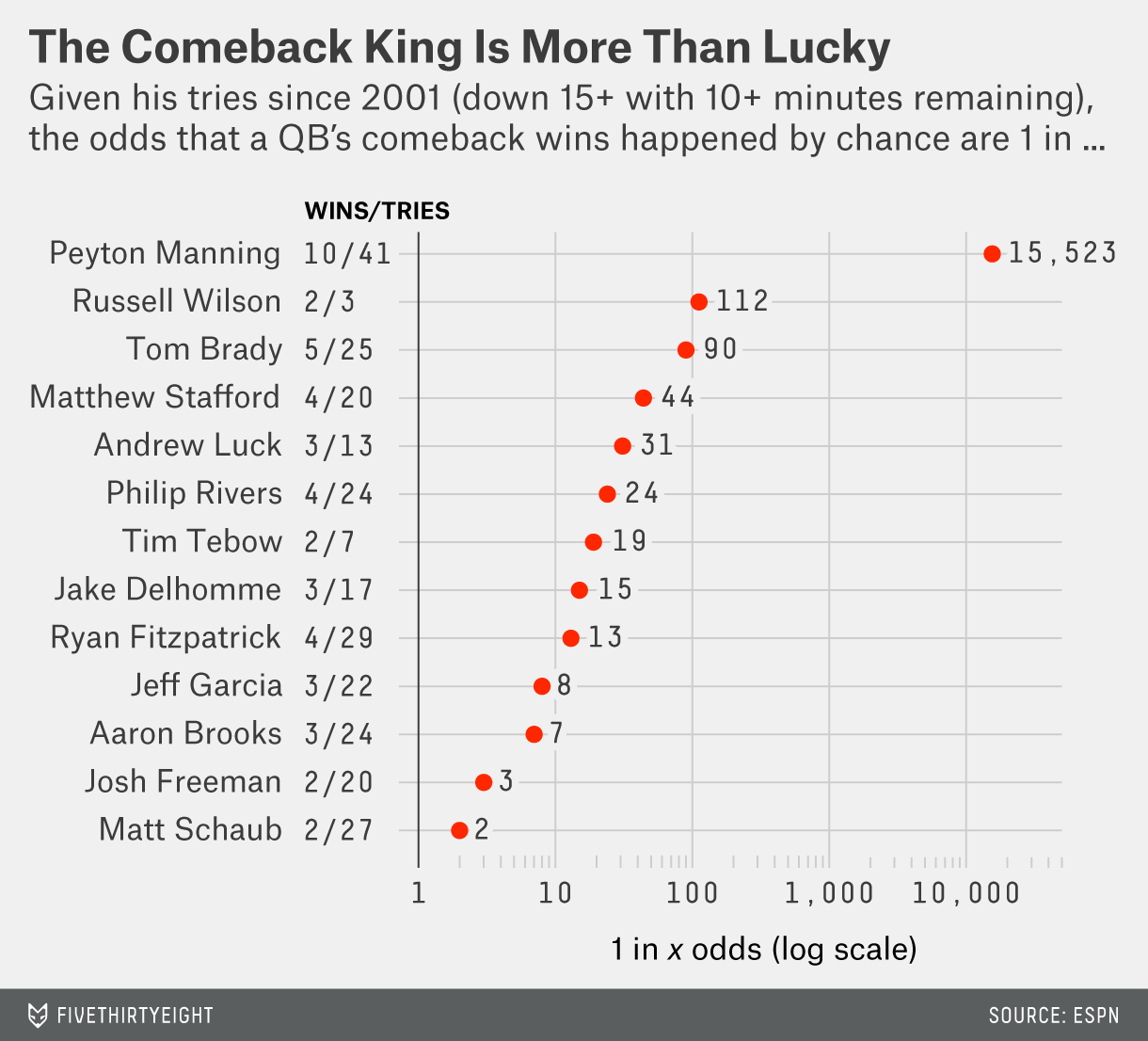 Yes, that’s a logarithmic scale. It needs to be because Manning’s results are that much better.4

Peyton Manning’s 10 comebacks in 41 attempts is over 150 times less likely than Tom Brady’s five comebacks in 25.

The NFL is now down to just three undefeated teams: the Philadelphia Eagles, the Cincinnati Bengals and Patrick Peterson’s Arizona Cardinals.

Of these, the Bengals have been the most dominant, winning their three games by an average of nearly 16 points.

The Eagles have needed three improbable comebacks (and as my colleague Neil Paine pointed out after Week 2 — and is still true now — they’ve spent most of this season trailing). However, the Eagles were a 10-6 team last year, and teams that start hot are far more likely to be successful if they have a track record.

Here are all the teams that have started 3-0 and whether they did or didn’t make the playoffs, arranged by the number of games they won the year before: 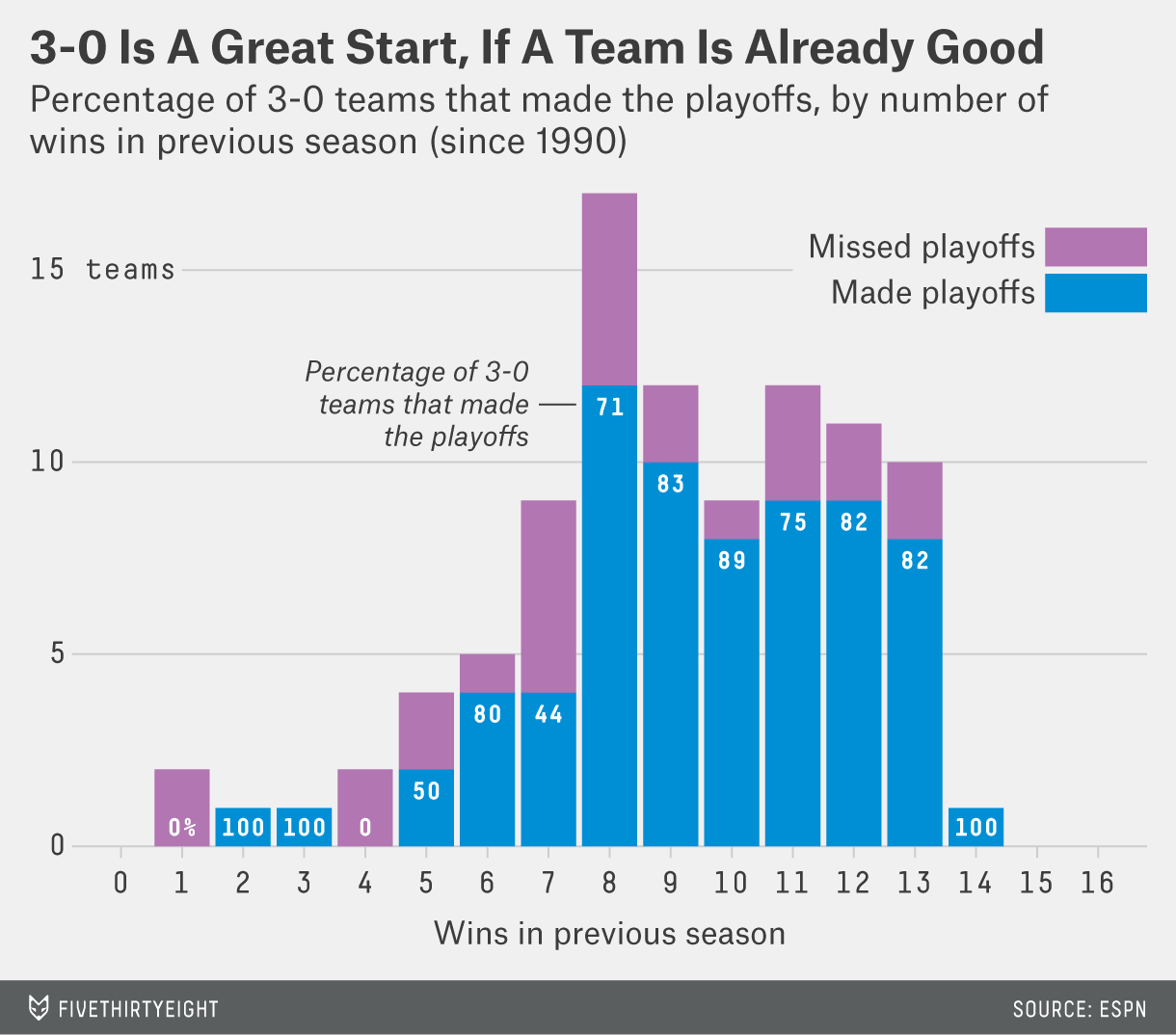 Indeed, given that a team has started the season 3-0, knowing how many wins it had the season before is about twice as valuable as knowing what its margin of victory was in its first three games of this season (more on this later).

While these probably wouldn’t have been the three teams most observers would have picked to start the season 3-0, they’re not really shocking either: The Bengals were 11-5 last year, and both the Cardinals and the Eagles were 10-6. While starting 3-0 certainly isn’t a guarantee of anything, immediate history suggests all three teams should be fine.

This was quite a week for rookie QBs! The top four quarterbacks in this year’s draft all saw action.

As a reminder, my most basic criteria for evaluating a rookie quarterback’s career prospects (as discussed here, here, and here) are:

Our leaderboard for “best career prospects,” — which, yes, I just invented — is shaken up considerably. It had been basically just draft order until the start of the season, with Derek Carr on top since then, but now …

In case you missed it

If you haven’t read it, you should really click through to my colleague Neil Paine’s article from earlier this week that revisits the Greatest Show on Turf. I particularly liked this line: “The Rams anticipated what statistical analysts would eventually come to learn about football: Teams run when they win; they don’t win when they run.”

That’s a causal chiasmus that holds true for so many things about football.

Experimental chart of the week

In Skeptical Football Week 1, we posted a chart showing the percentage of teams with a given record making the playoffs (since updated), and also noted that the odds were considerably different if a team had gone 12-4 or better the previous season. We’re still at a point in this season where the previous year’s results matter a good deal.

We can combine each team’s results from this point in the season with its results from the previous season in a regression to see which is more important: what a team has shown over three games this year, or what it showed over 16 games the year prior. Using raw winning percentages or average margin of victory, we can predict wins or margin of victory for the remainder of the current season — which metric we use doesn’t really matter. Here, for the hobbyists at home, are a couple of examples of how to do these calculations yourself:

For the whole set of teams since 1990, the first three games of the current season and the entirety of the previous season are roughly about equally predictive.

But if we break the sample down by record, we can see that a disproportionate amount of the predictive work is being done by the 3-0 teams. Here’s a comparison of the previous season’s margin of victory with the percentage of games won over the remaining 13 games, broken down by number of wins after three games: 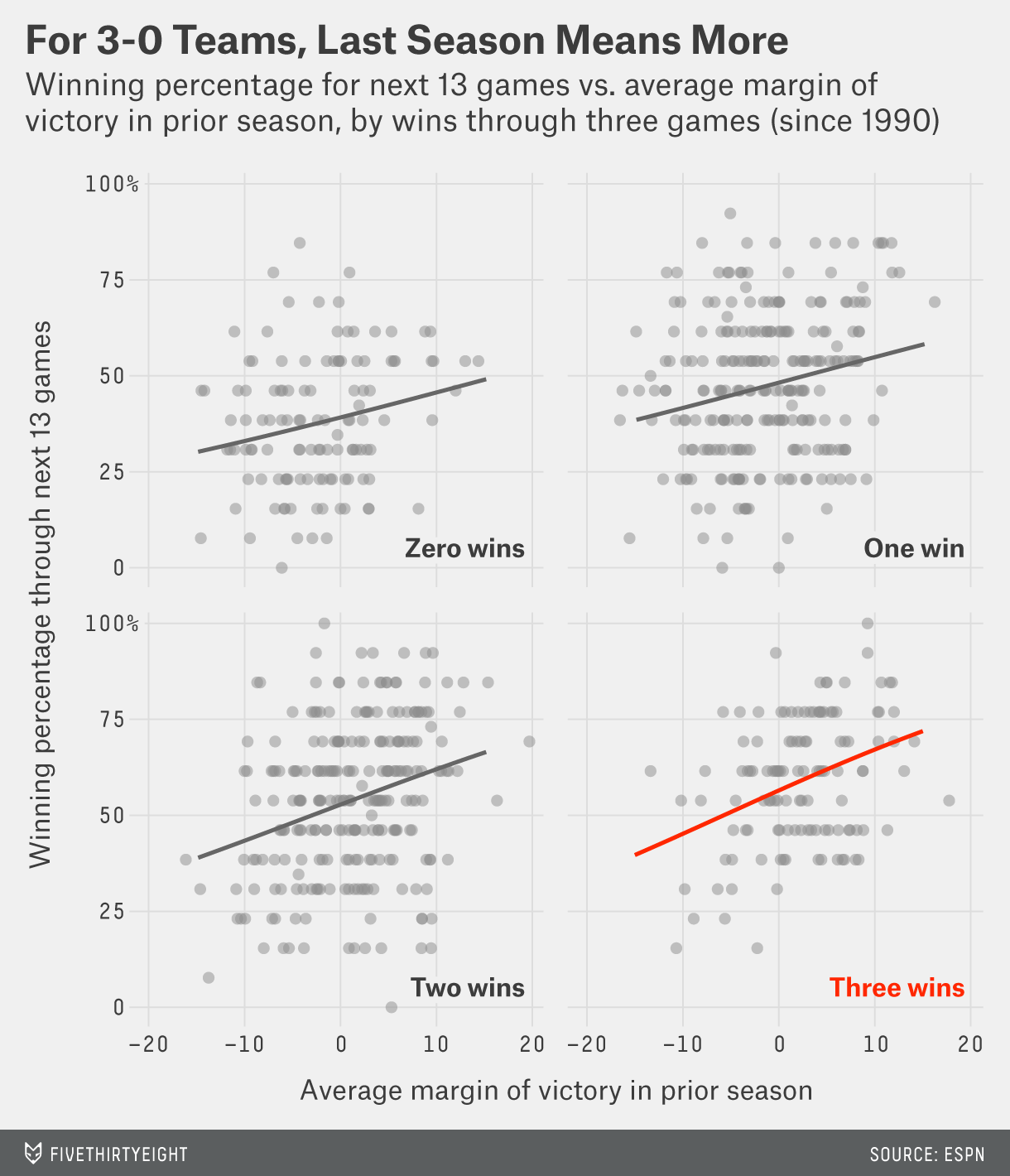 Note that in the red plot there are fewer outliers and the slope of the fit is steeper. (If you look just at 3-0 teams, the previous season’s record is about twice as important as the margin of victory the team put up over the first three games.) Pedigree appears to be even better at separating the contenders from the pretenders than it is at predicting team performance in general.

Kudos to previous Gunslinger of the Week awardees Andrew Luck and Matt Ryan, who both took out their aggression on lesser opponents, going off against Jacksonville and Tampa Bay, respectively, for a combined 52 of 63 for 656 yards and four TDs, with no INTs. The same mindset that leads to a game-costing interception today may lead to game-breaking touchdowns tomorrow.

But unlike the previous weekend, last week’s gunslinging produced more immediate results. Six quarterbacks won despite throwing interceptions (up from just one the week before). There’s nothing more exciting to me than seeing a QB who is scraping to get back in a game throw an interception, and then come back to win anyway — particularly if it’s a back-breaking pick-6.7

Which is why, in a stunning upset, the Gunslinger of the Week award goes to … Tony Romo. I know, right? I demand a recount! But so it is. Throwing a pick-6 when down 14 and then managing to come back from 21 down to win anyway is just too much to ignore, despite Peyton Manning’s late-game theatrics against Seattle. Romo’s heroics deserve acknowledgement.

Despite being one of the gunslingers fans most love to hate, Romo is actually a decent close-game QB. He has won 44 percent of games decided by less than a touchdown — no Brady (64 percent) or Manning (59 percent) to be sure, but better than the likes of Donovan McNabb, Carson Palmer, Philip Rivers, Kurt Warner, Aaron Rodgers and Matthew Stafford. Along with Matt Ryan, he’s one of only two players since 1990 to win a game despite throwing five interceptions (in 2007 against Buffalo). 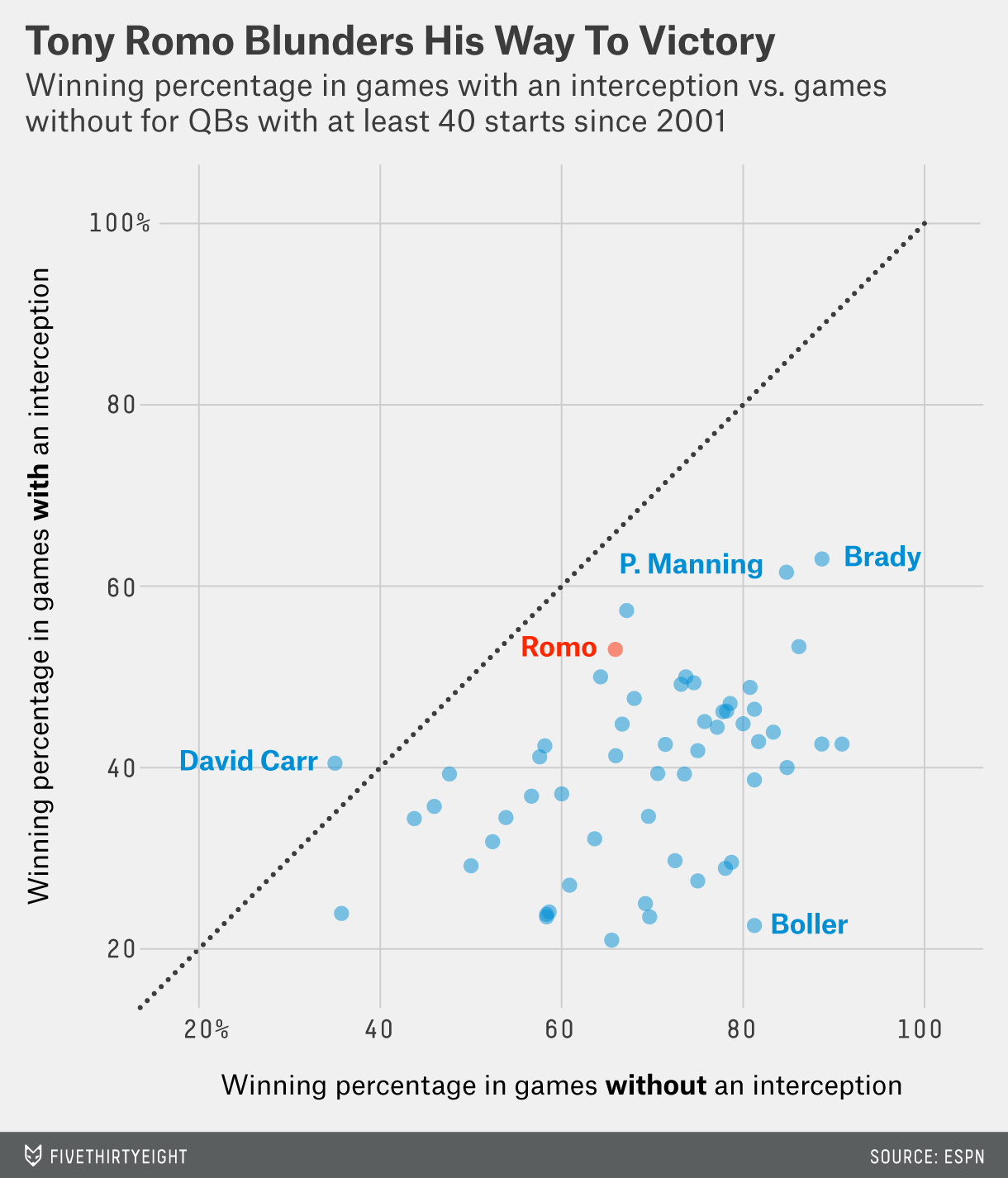 Among quarterbacks with at least 40 starts since 2001, that’s the fifth-highest winning percentage in games with an interception (behind Donovan McNabb and Ben Roethlisberger as well as Brady and Manning).

Most empirically significant game of Week 4

This is a no-brainer for me: It’s the Eagles vs. the 49ers, for at least three reasons:

Also, in a roundabout way, every time I watch the 49ers I feel like I learn something about the Seahawks, and what they’re all about is pretty interesting right now.