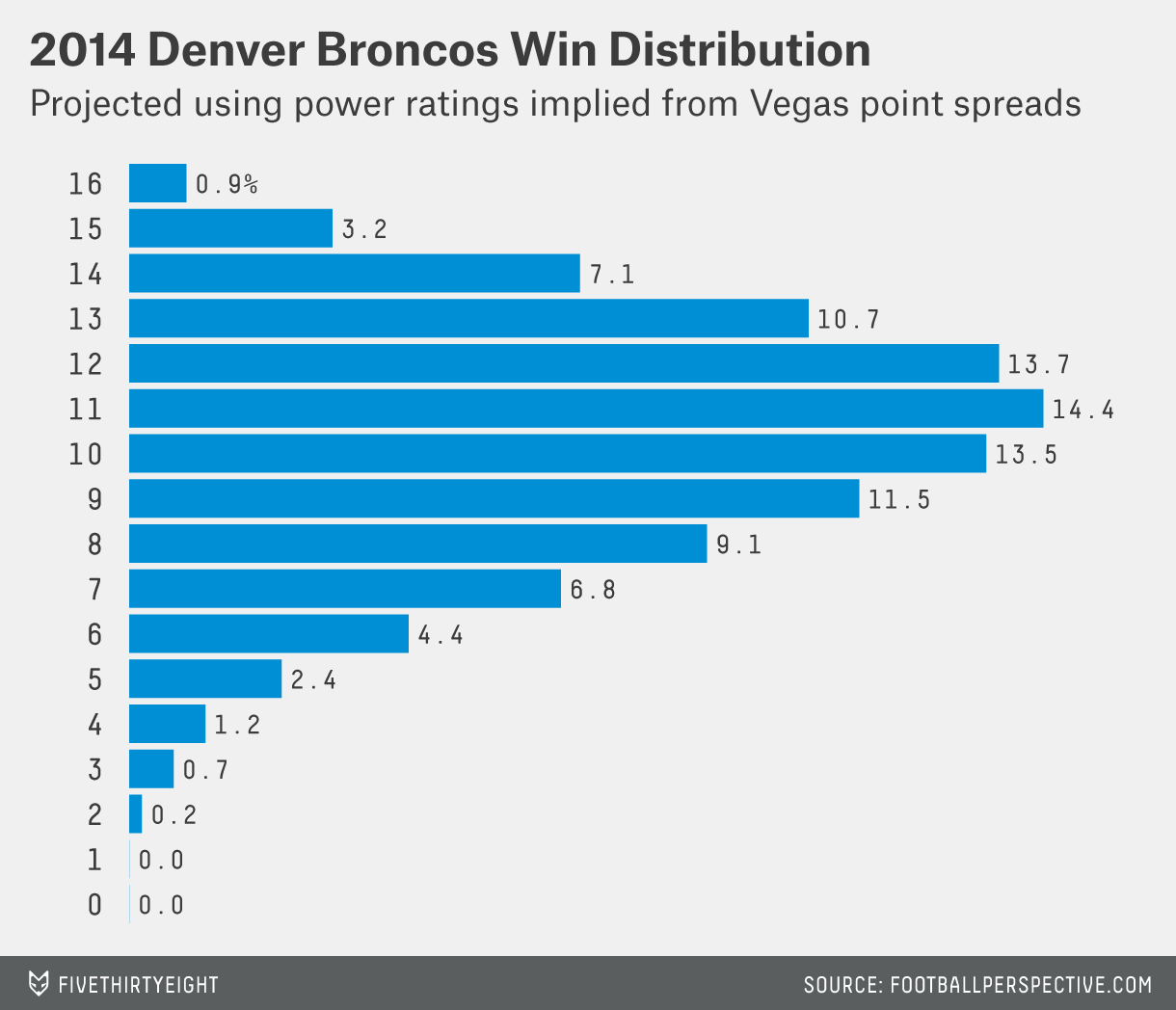 The Denver Broncos are coming off a second straight 13-3 season and their first Super Bowl appearance in the post-Elway era. It was MVP quarterback Peyton Manning’s 10th time winning 12 or more games in a season — nobody else has done it more than eight times (Tom Brady holds that mark).

Yet there are “whispers” that the Seattle Seahawks defense may have finally exposed Manning’s limitations. Doubting Manning is an ancient sport, and though it has changed somewhat over time, it’s not going anywhere anytime soon.

The last time Manning failed to win at least 10 games was 2001 (when Russell Wilson was still in middle school) yet Manning is only 11-12 in the postseason. Critics often say Manning is a good “regular season quarterback,” but not a great “playoff quarterback.” The theory is that there’s something about Manning’s game that makes him great at beating up on weak opponents, but that can’t handle the tougher, more complex defenses found commonly in playoff opponents.

I’ll confess, before looking into this myself, I thought it was a plausible-sounding theory.1 But for the most part, the reason Manning has had a harder time winning games in the playoffs is the same as it is for virtually everyone else: He has faced tougher opponents and tougher defenses. While it’s true that his teams haven’t won quite as many games as expected, and that he performs a little worse in the playoffs than in the regular season, he has actually performed better against playoff defenses that we would expect given the strength of those defenses.

The chart below shows all of Manning’s games since 2006. Every dot above the line is a Manning performance that exceeded that of other quarterbacks against the same defense. 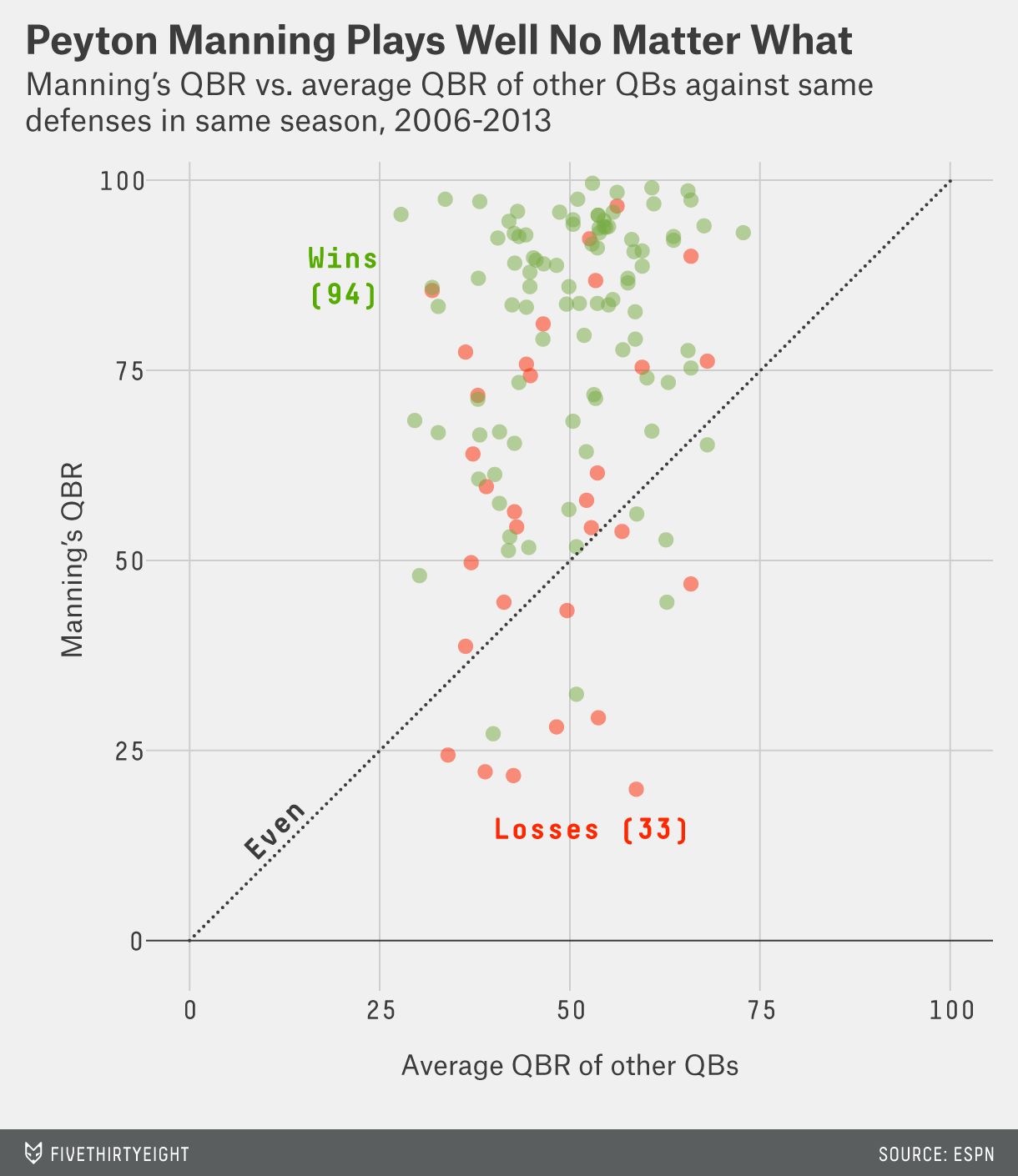 Yes, Manning had a pretty terrible game against a terrific Seattle defense, but he has a long history of lighting up similarly accomplished opponents.4 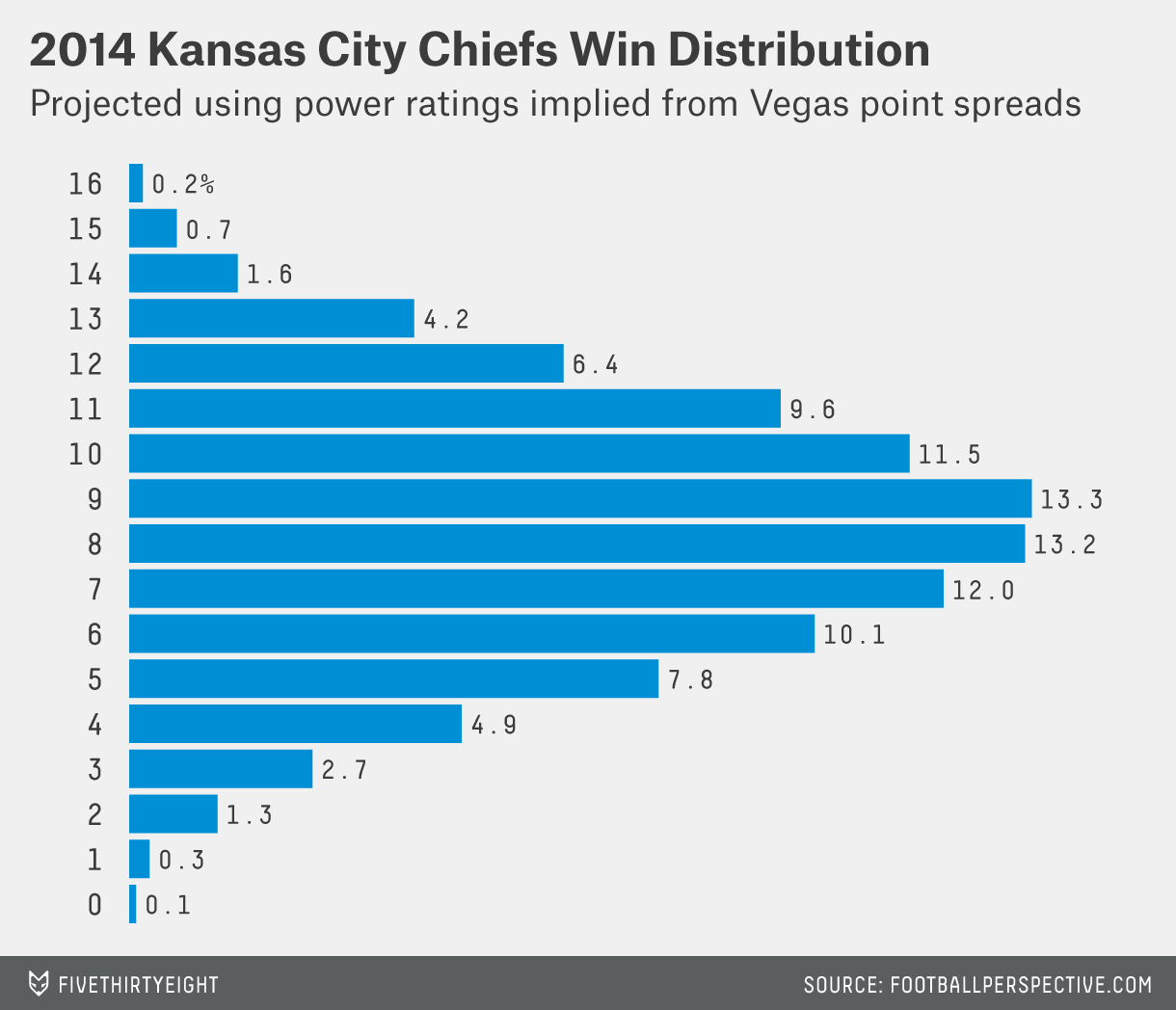 Last year, Kansas City went 11-5 despite a significant regression in QB Alex Smith’s statistics from the year before. How did they do so well (aside from having a highly favorable turnover differential)?

Largely because of Alex Smith.5 He may not be the QB Chiefs fans wanted, but he’s the QB Chiefs fans needed. While Smith’s passer rating of 89.1 represented a 15-point drop from his 2012 season with San Francisco,6 it’s still 25.3 points higher than Kansas City’s 2012 quarterbacks.7

But Alex Smith isn’t even close to being the Chiefs’ best player.8 That would be all-star running back Jamaal Charles, who led the Chiefs in both rushing and receiving last year, and who has averaged 5.6 yards per carry over his career.

While Fantasy Football players have been intimately familiar with Charles since his breakout 2009 season, the three-time Pro-Bowler has flown a little under the radar playing for a Kansas City team that hasn’t won a playoff game since 1993.

In my NFC North season preview, I mildly criticized Adrian Peterson9 for being better at the kinds of things the passing game already has covered (breaking long plays), and worse at the kinds of things that help keep the running game relevant (gaining yardage consistently, setting up high-leverage second downs). So with another star running back on my plate, I thought I should check to see if Charles has similar problems.

The simple answer is “no.” The slightly more complicated answer is “no, and this is a silly comparison because Jamaal Charles is way better than Adrian Peterson.”

Let’s start with what kinds of outcomes each back produces on first-and-10 runs from outside the red zone10: 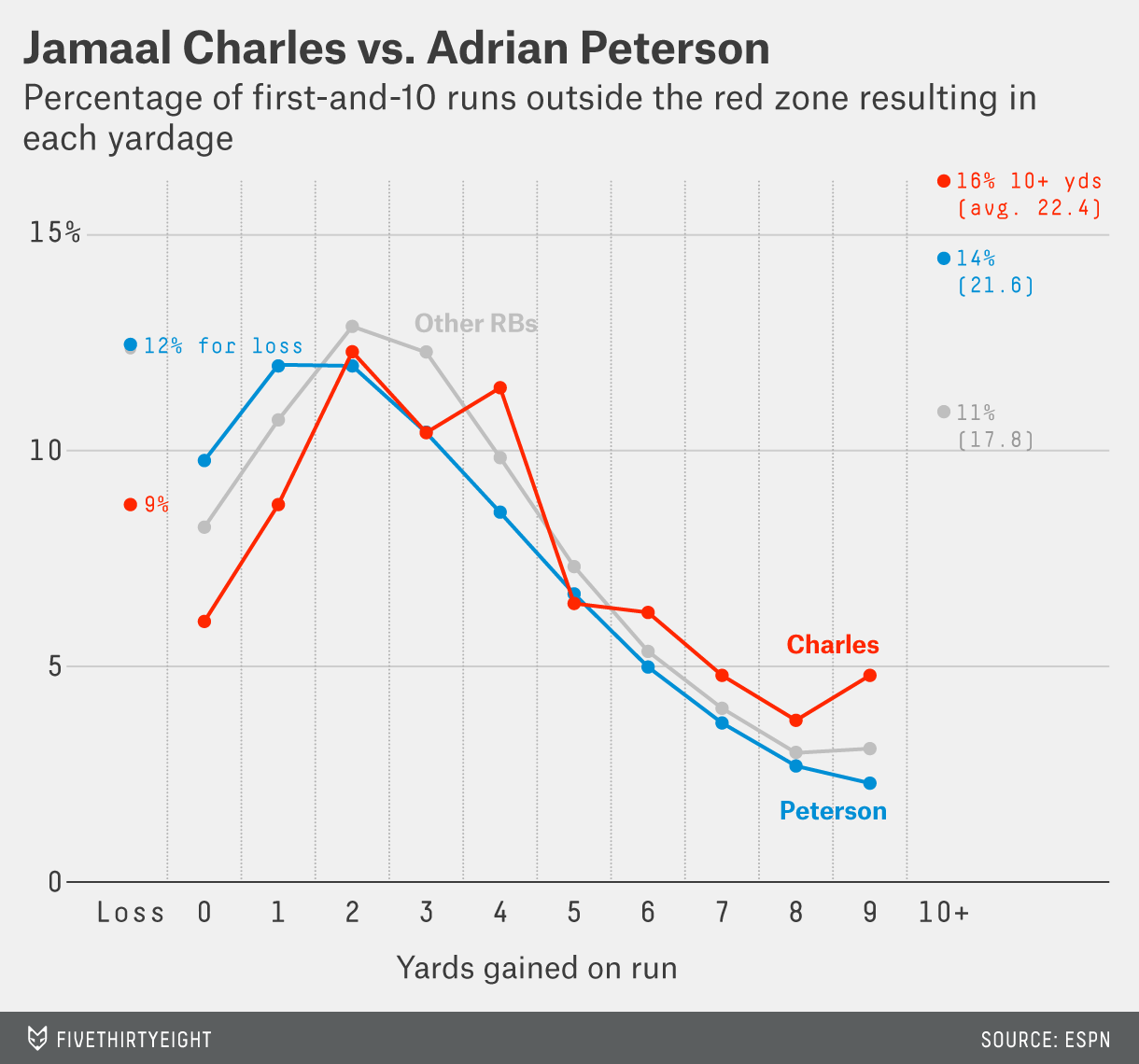 Charles runs for losses or no yards less often than Peterson does, has more quality (4-6 yard) and high-leverage (7-9 yard) gains, runs for first downs more often, and has more yards per carry on those first down runs.

OK, fine. But there’s more to being a running back than just running on first down, right? For a more comprehensive comparison, I looked at a number of different scenarios11: 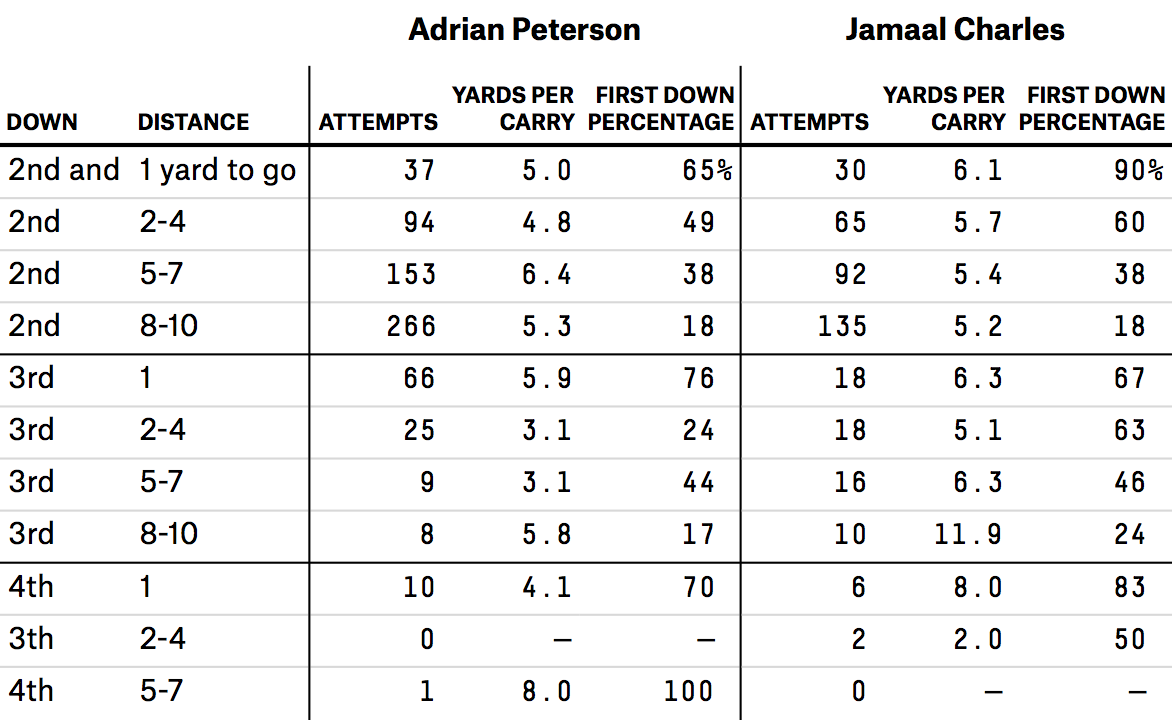 This is a bit of a split decision. AP is a little better on second-and-mid-distance (which is one of the more common running situations) and a little bit better on third-and-1 (though Charles isn’t used that way very often). On the other hand, Charles appears to be better at second-and-short-distance as well as third-and-medium to third-and-long (which Peterson is not asked to do very often, either).

To try to boil it down in a way that’s neutral to team circumstances, I took each RB’s performance for all scenarios (including those above and rarer ones) and applied it to the frequency of those scenarios league wide. The result of that calculation is pretty lopsided: On a common set of runs, Charles would likely pick up first downs 5.7 percentage points more often and would gain 1.6 yards more per carry than an average running back, compared to 3.2 percentage points and 1.0 extra yards per carry for Peterson. In other words, per carry, Charles gains about 0.6 more yards and is 2.5 percentage points more likely to pick up a first down than Peterson.

In other words, not only does Charles catch more passes, but targeting him has led to better outcomes for worse quarterbacks. Also, he has had worse quarterbacks! This makes his performance less likely to be a product of his team’s offense.

All in all, the Chiefs should probably expect to regress somewhat after such a dramatic improvement (and such a favorable turnover margin) last year, but they definitely have some weapons to keep them competitive. 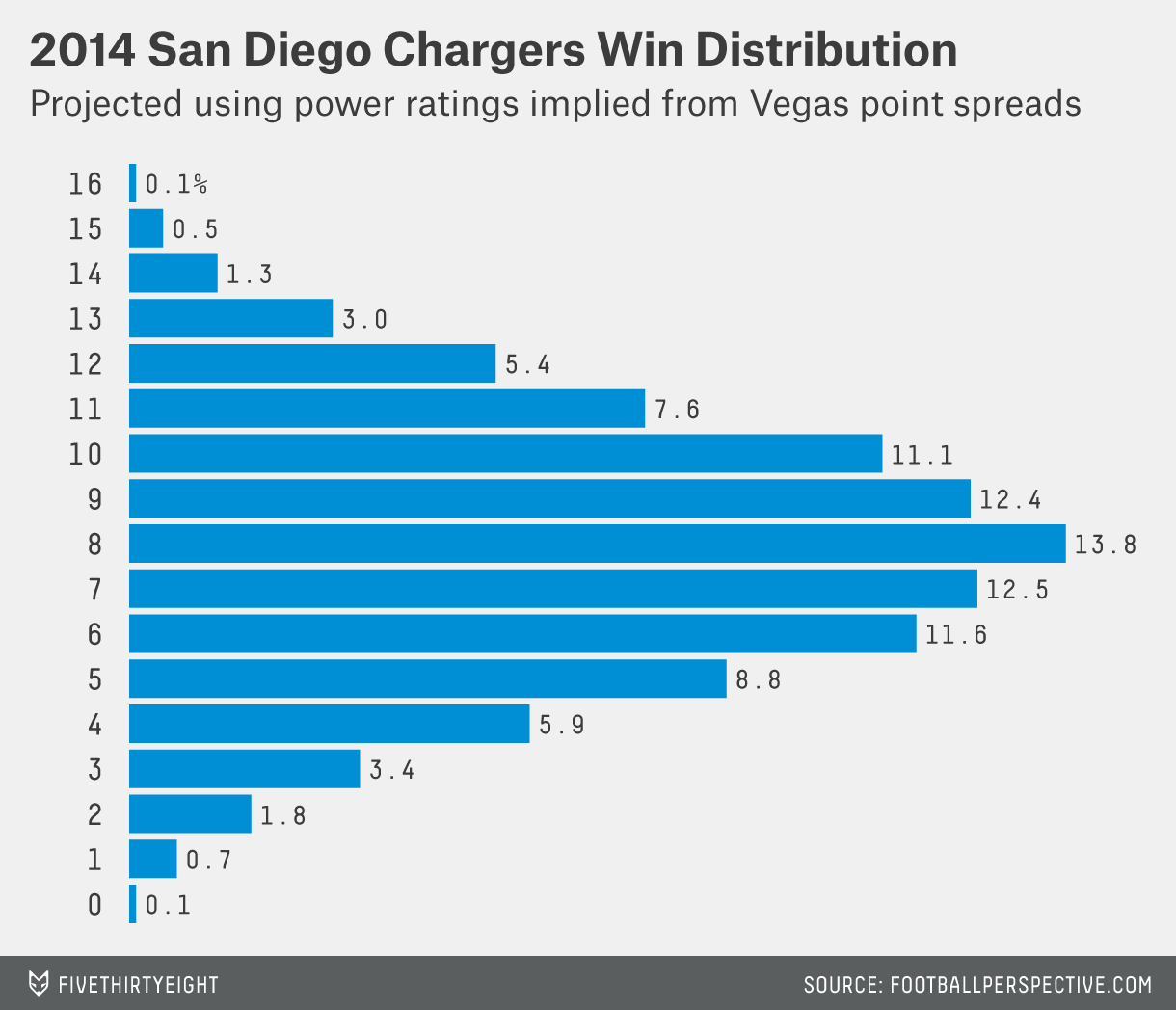 The Chargers have to be one of the NFL’s most frustrated franchises. In 2013, they led the league in average drive distance on offense — gaining an average of 37.6 yards per drive. They also had the lowest three-and-out rate, with only 25.6 percent of their drives failing to gain a first down. And overall they scored 2.32 points per drive, good for second in the league behind Denver’s 2.83. Their defense was mediocre, ranking 22nd in average points allowed per drive, but their net point differential between their drives and their opponents’ drives was ninth in the league. Despite all that, they finished only 9-7. The Chargers haven’t had a 10-win season since LaDanian Tomlinson’s departure in 2009.

Since Philip Rivers took over as starting QB in 2006, the statistical darling and regular Pro Bowler has made the Chargers an offensive powerhouse, scoring 2.20 points per drive, the fourth-highest in the period, behind only the Patriots, Peytons,12 and Saints. This has put them in very good company among NFL franchises. 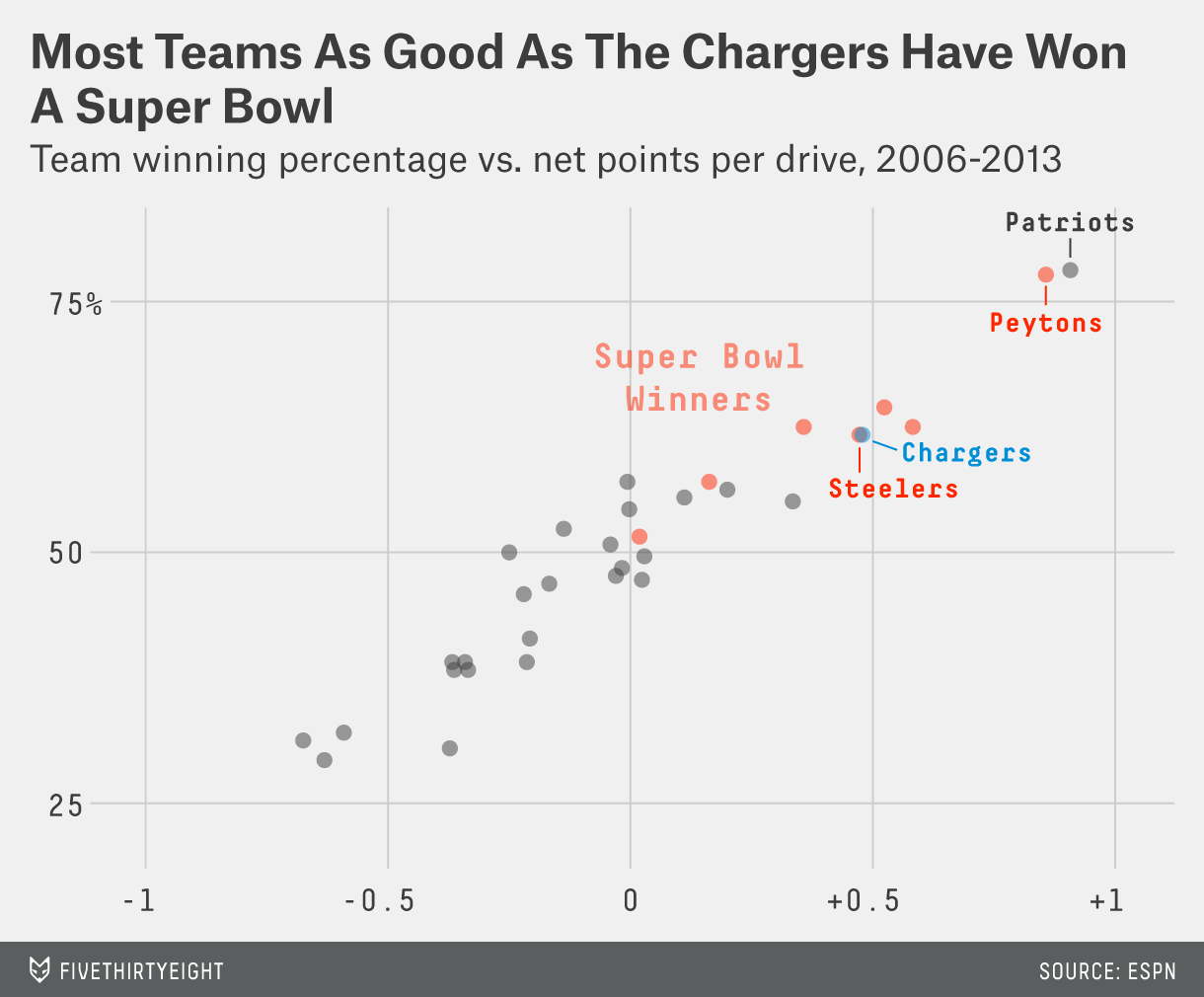 Every team in the Chargers’ neighborhood has won a Super Bowl, and the only team with greater success to fail to win one over that period is the Patriots.

Like Manning, Rivers has his detractors: He can’t win in the playoffs! He can’t win big games! He makes mistakes at key moments! These are the classic arguments against statistically sound quarterbacks who perform well year in and year out but then fail to perform well in a few games (or even a few parts of a few games) in January.

But in this case, there may be something to it. At a cursory level, Rivers’s teams have not performed well in close games — which you see more of in the playoffs: 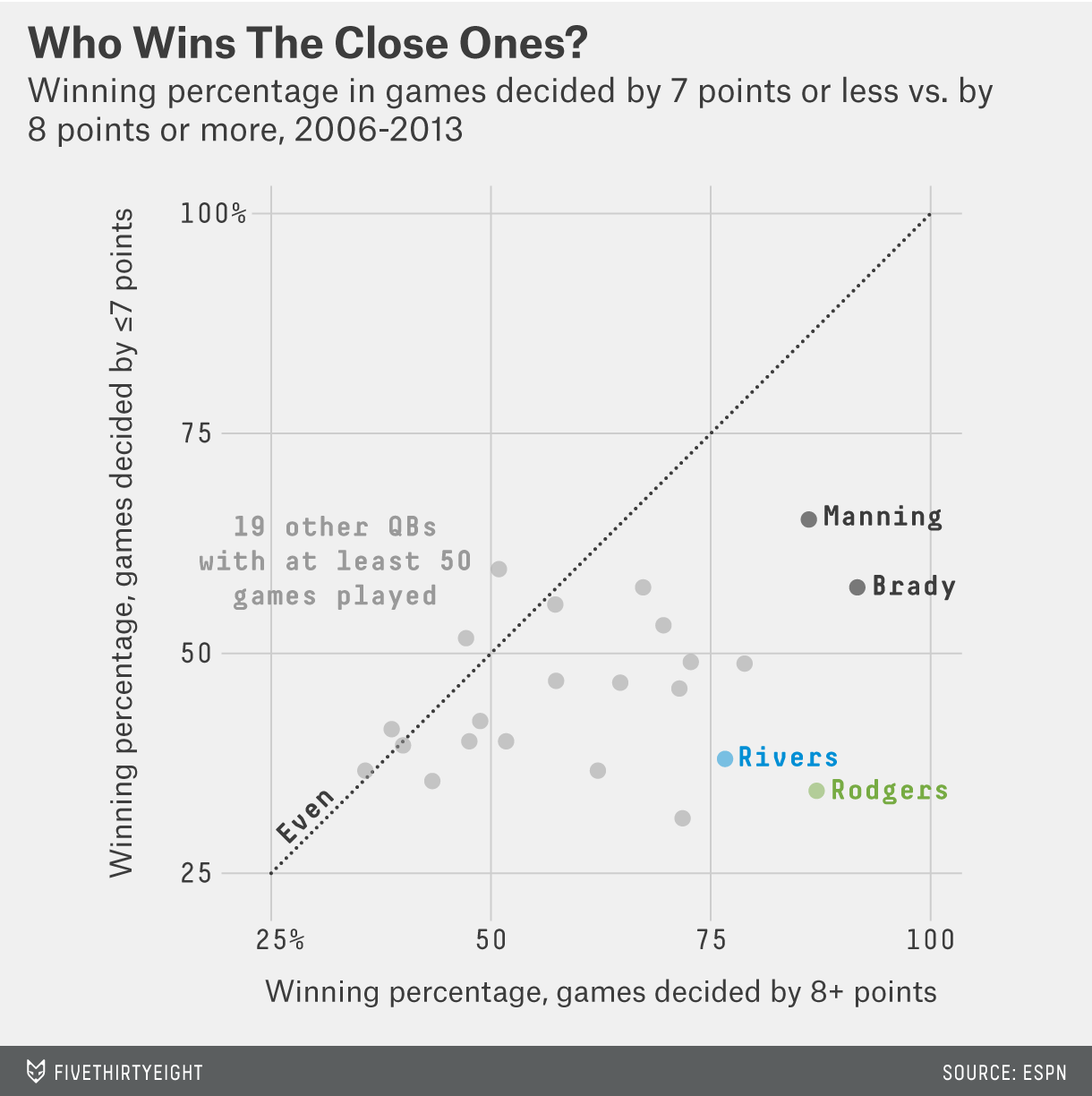 Since good teams are less likely to get blown out, they will naturally lose closer games much more often than blowouts. For example, Tom Brady has won 92 percent of his games decided by eight or more points, but “only” 58 percent of those decided by seven or fewer. But even considering this, Rivers has been terrible: He has won 77 percent of his larger-margin games, but just 38 percent of close ones. And as far as football goes, this isn’t a very small sample: Rivers is 19-31 in those games.13

The only quarterback who has won more blowouts and lost more close games is Aaron Rodgers. As a Super Bowl-winner and one of the highest-rated quarterbacks of all time, he may sound like good company, but as I discussed earlier, while Rodgers’s skills aren’t in doubt, his win-maximizing tactics are.

With that in mind, I used a similar method to look more closely at when Rivers throws interceptions and touchdowns14, and a few things stuck out:

So overall it appears that there are markers of Rivers being a bit too conservative in some of the wrong places. On top of that, it’s likely that his stats are a bit inflated, and he has played worse than normal in the highest-leverage situations.

But good news, Chargers fans! This is preferable to consistency across scenarios. As I said with Rodgers, strategic shortcomings are fixable. And while playing the worst in the most important spots may get a quarterback a reputation as a choker, those are the most likely spots for his play to improve (as he regresses toward his own personal mean). 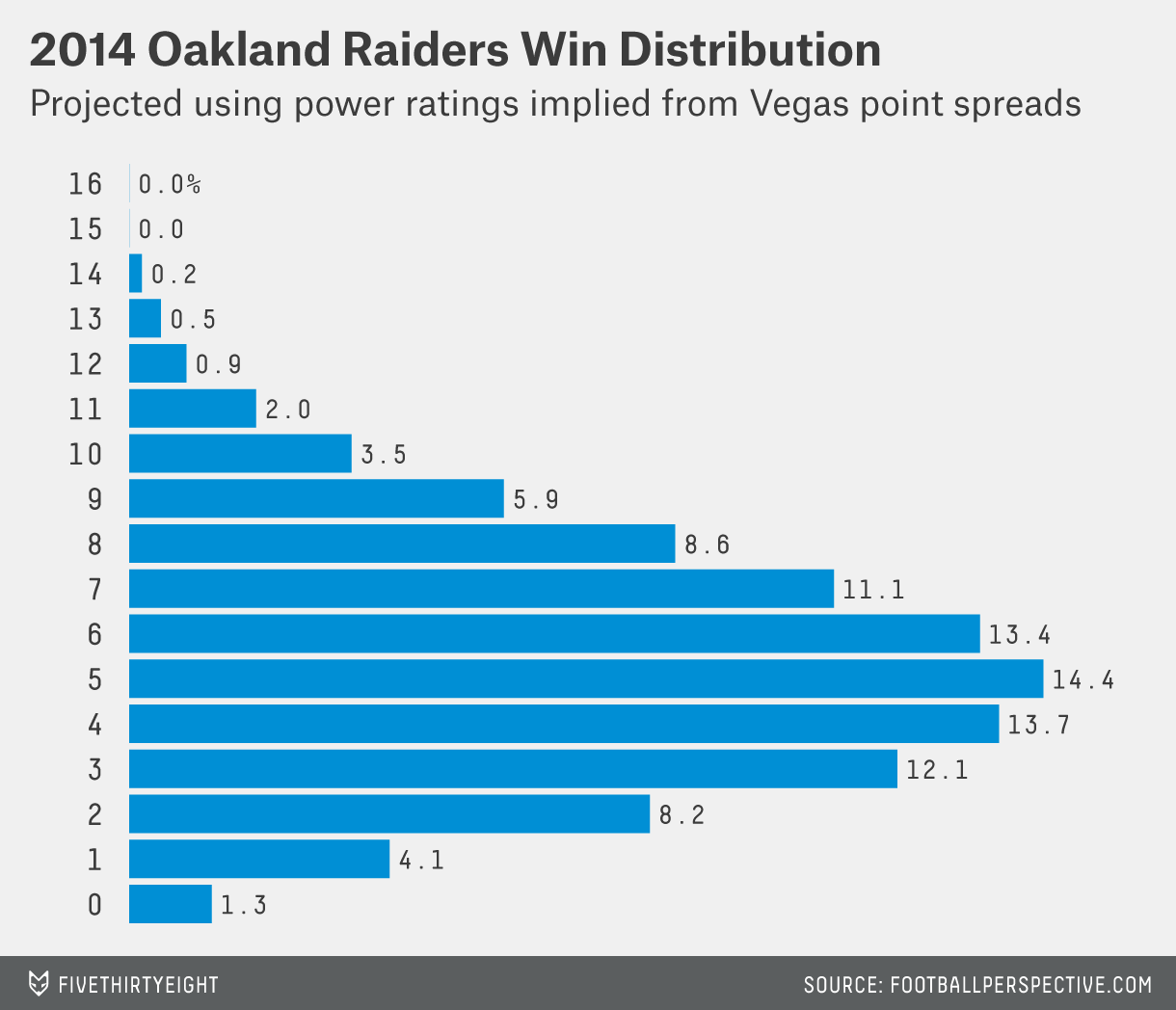 Over that period, their defense has given up the most points per drive, and their offense has scored the second-fewest, leading to a net difference of -0.56 points. This is the worst net difference in football; on the opposite extreme are the Patriots (+.79) and the Peytons (+.77).

So do the Raiders have any reason for hope?

Following a (single) great preseason outing against the Seattle Seahawks, the Raiders have announced that they’ll be starting second-round draft pick Derek Carr on opening weekend. Carr is perhaps best known for being former No. 1 pick David Carr’s younger brother, though he also threw for a nation-leading 5,083 yards and 50 touchdowns in Fresno State’s 2013 Mountain West Conference campaign.15

It would be quite reasonable to doubt the Raiders’ judgment after their recent history of high-profile coaching and quarterbacking disasters. But in a vacuum, having a QB drafted 36th starting on opening night should be good news to Raiders fans. I’ve modeled career success for rookie QBs based on a number of factors (such as weight and stature), including draft position. Combining this with data on how much each rookie played, we can estimate the expected number of wins following his rookie season for a QB drafted with the 36th pick like so16: 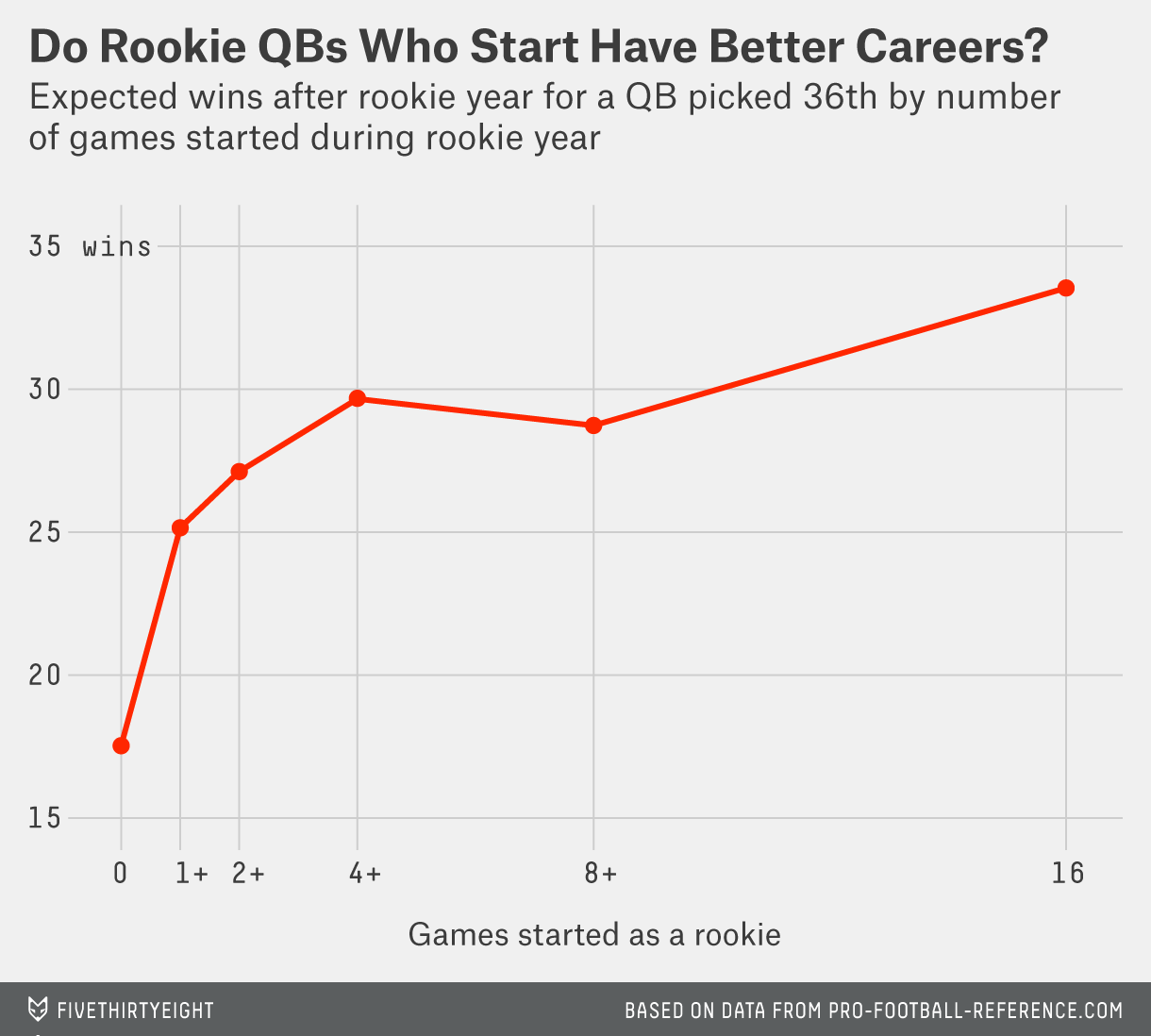 Without knowing how many games he’ll start, the expected number of post-rookie wins for a No. 36 pick is about 21. Knowing that Carr will start at least one game boosts him up to about 25 wins, and if he makes it to four games his wins go up to about 30. You can use other metrics as the predicted variable and the results are similar: His odds of “success” (which I defined as Career Approximate Value greater than 32.0) jump to 51 percent from 33 percent with four games started, and his average non-rookie AV jumps to 44.4 from 32.7.

Four games seems to be about the inflection point — beyond that, as the number of rookie QBs in the data set who started that many games shrinks, it gets very noisy with a flatter trend.

Note that I am absolutely not saying that it’s better to start rookie quarterbacks rather than let them develop. It’s likely that most (if not all) of the effect we’re seeing is merely a result of better quarterbacks being more likely to earn a starting nod than worse ones, independent of where they were drafted.

All else being equal, the odds that Carr is the real deal are looking better.