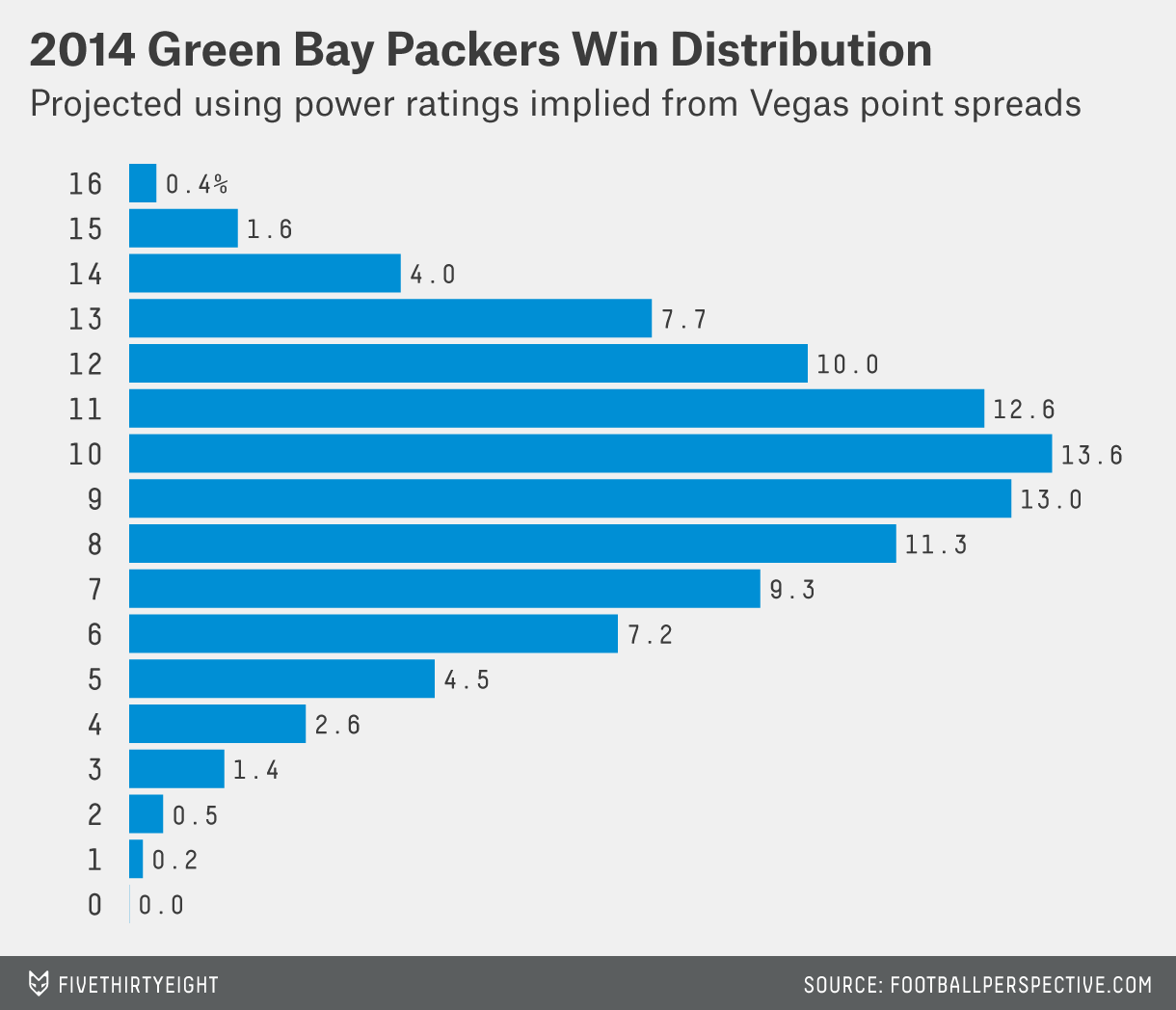 Last year, with quarterback Aaron Rodgers missing half the season due to a broken collarbone, the Packers finished with just an 8-7-1 record, and gave up more points than they scored. Despite all that, they still eked out an NFC North division championship for the third year in a row.

In the eight games in which Rodgers played more than the opening drive, the Packers went 6-2 with an average margin of victory of 7.4 points. In the eight games that featured the smorgasbord1 of Packers backups, they went 2-5-1 with an average margin of defeat of 8.8 points. It’s difficult to disentangle a quarterback’s performance from that of his teammates (or his coaches), but the Packers’ 2013 results are perhaps the best evidence yet that Rodgers is the real deal.2

Since Rodgers took over for Brett Favre in 2008, the Packers have been one of the NFL’s best franchises. They’ve won the fourth-most games (they’re in essentially a four-way-tie behind the Patriots) and a Super Bowl (as many of those as anyone else over that period, and one more than the Patriots). ESPN’s Total Quarterback Rating (QBR) is one of the most all-encompassing quarterback rating systems out there today.3 Rodgers’s QBR in the last six years is 72.9, second only to Peyton Manning’s 80.7. Rodgers performs fantastically well in a variety of other quarterback metrics.

But that’s what happens when you a) play for a good team and b) don’t throw interceptions. These are strongly related. Most interceptions are thrown when the quarterback’s team is trailing (about twice as many as when it’s ahead), and they become more and more likely the more his team is down or the closer they come to the end of the game4:

Interceptions are often (even largely) a product of completely rational risk-taking by desperate quarterbacks. A logical implication of this is that if a quarterback is too conservative, he can throw too few interceptions, which can be just as bad as throwing too many.

Despite his various successes, it’s possible Rodgers fits this description of an overly conservative quarterback. For example, with his team down by two or more scores (9+ points) he has thrown only three interceptions out of 354 passes attempted (0.8 percent) in his career. This is typically when quarterbacks throw the most INTs, because they’re trying to get their teams back into the game, and high-risk strategies often give them the best chance to win. Overall, quarterbacks throw interceptions about 3.5 percent of the time on average in those situations, with even most great quarterbacks breaking 3.0 percent. Peyton Manning, for example, has averaged 3.1 percent, Drew Brees has averaged 3.3 percent, and even Tom Brady has thrown 2.3 percent (slightly above his career average).5

Being insufficiently willing to gamble even when circumstances are dire can be good for a QB’s stats, while bad for his team. And there’s evidence of this in Rodgers’s record as well: He has only engineered six fourth-quarter comebacks in his career — good for 149th all time (Russell Wilson already has eight).

There’s nothing wrong with giving your team the lead and then keeping it.6 But Rodgers has averaged one fourth-quarter comeback every 14.5 games. This is staggeringly low, even for a player whose team isn’t behind that often. Brady has played for an even more consistently good team and has a fourth-quarter comeback once every 6.2 games. Both brothers Manning have averaged one every six games, Ben Roethlisberger has one every 6.2, Drew Brees and Joe Flacco have one about every eight. Favre (surprisingly) had one only every 9.9 games.

But the good news for Packers fans is that Rodgers has some pretty low-hanging room for improvement: If he starts taking more calculated risks (likely sacrificing his stats a little in the process), the Pack may be even more dangerous. 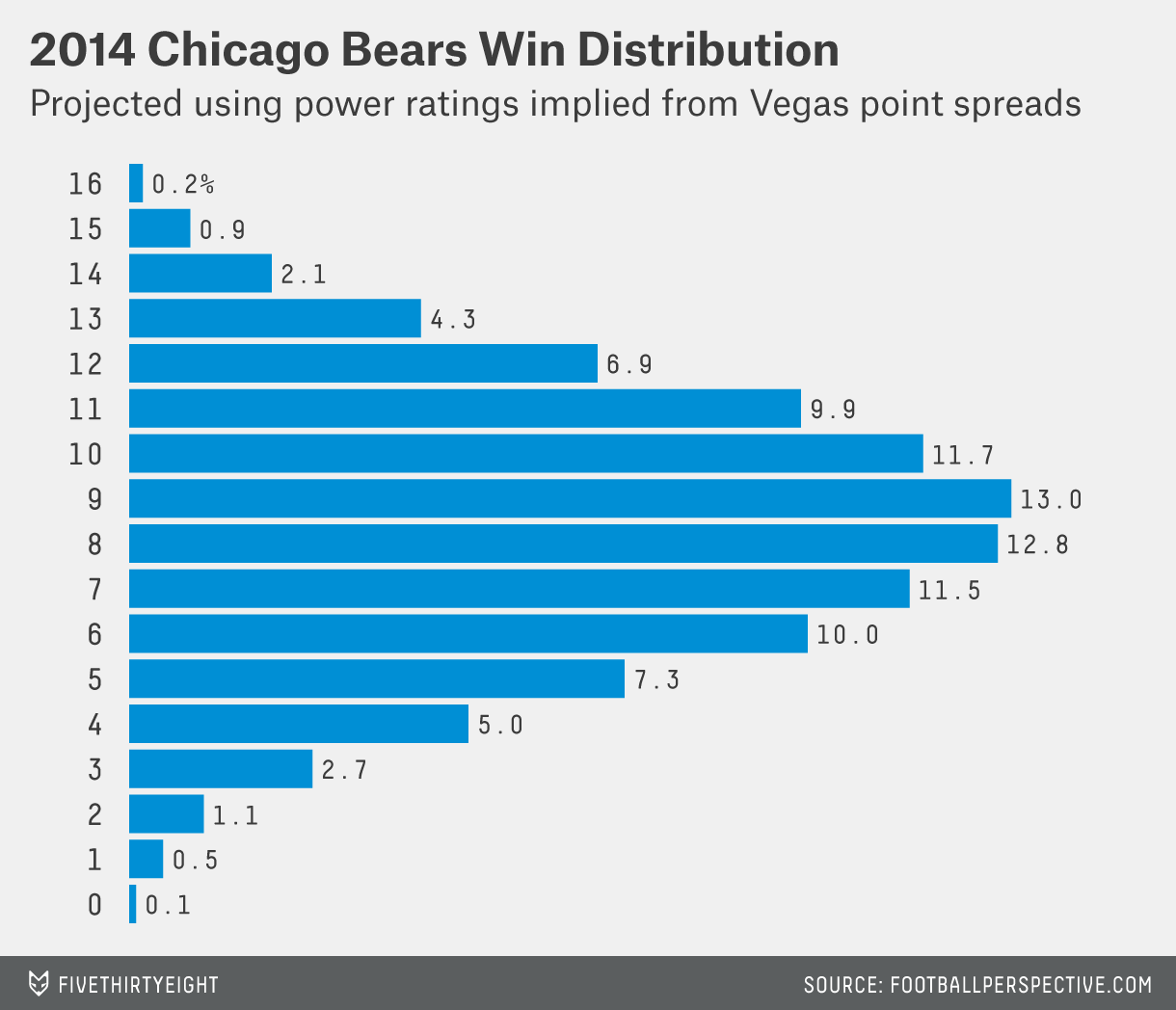 Last season, the Chicago Bears finished 8-8, fitting for a team with one of the best offenses (not led by Peyton Manning) and one of the worst defenses in football. That’s a good excuse to talk about their special teams.

For as yet unknown reasons, Chicago let its best player7 go.

While Devin Hester never developed into the double-threat for Chicago that the team hoped (much less the triple-threat he was at the University of Miami), he is almost certainly the greatest punt returner in NFL history.8 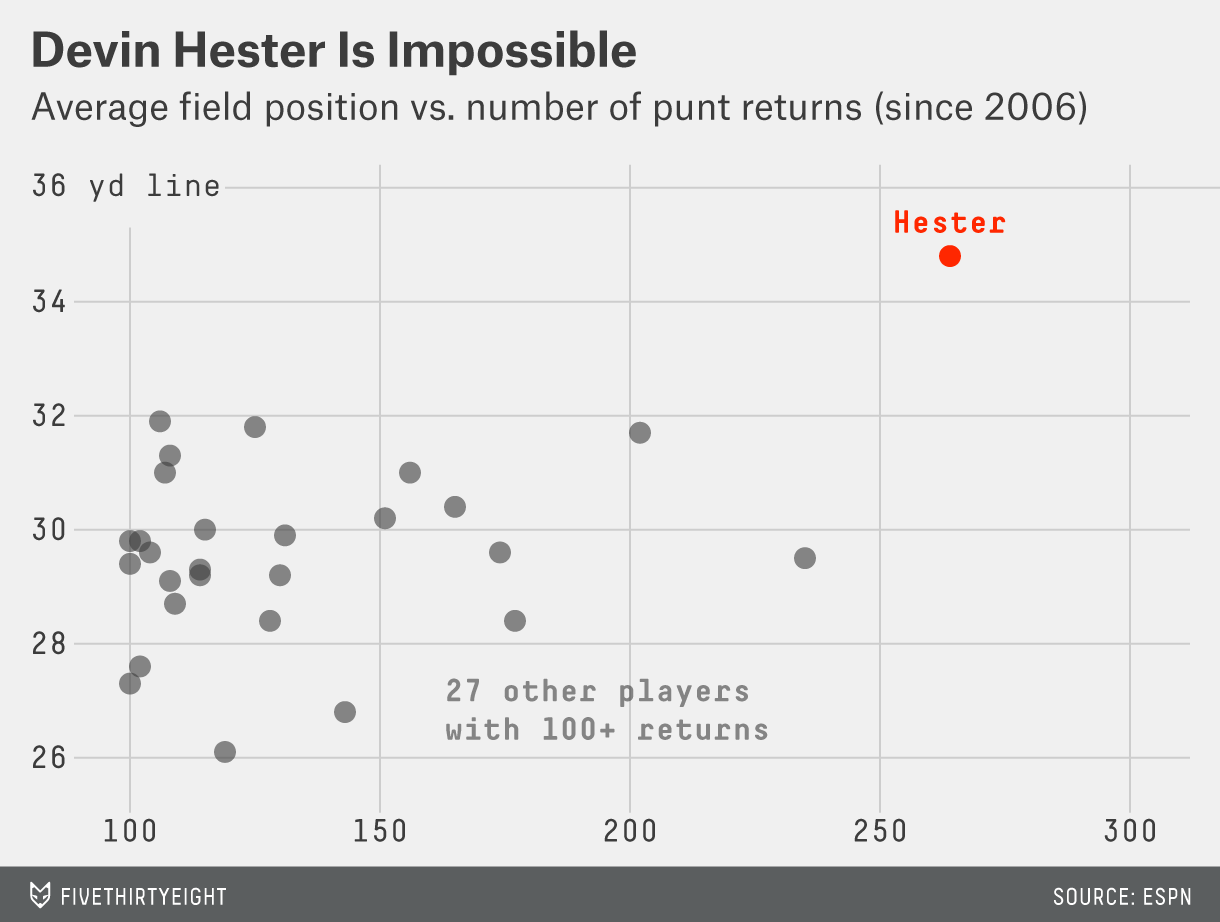 This includes a record 13 touchdowns (the previous career record for any punt returner was 10). Hester also has five touchdowns from kickoff returns (good for eighth on the all-time list9) and is looking to break his present tie with Deion Sanders for most non-offensive touchdowns in NFL history.

Kick and punt returns normally aren’t a big enough part of the game for a good returner to produce much value unless he also does other things well. But Hester is so insanely good he may be as close to an exception as you’ll ever see.

Determining how much value Hester added on kick returns is relatively simple. Taken on a season-by-season basis, a typical NFL kick returner would have scored about 1.8 touchdowns on Hester’s attempts, while Hester had 6.0. This leads to about an extra .20 points per game.10

But where things get interesting is with punts. With teams taking such crazy measures to avoid giving him the ball, Chicago’s punt return game benefited greatly whether Hester actually touched the ball or not.11

Since 2006, when Hester joined the team, Chicago has had the highest number of yards per punt return, resulting in the best average starting position, and has scored a touchdown on one of every 21 returns. The average for teams other than Chicago was one TD every 82 punt returns. And that’s not even counting all the times other teams punted short or out of bounds to avoid a return.

According to ESPN’s “expected points added” metric, Chicago’s punt return game was worth about .15 expected points over expectation for each of the 668 punts they faced, or about .80 points per game total.

Combining this .80 with the .20 Hester gained returning kickoffs, he was probably worth around 1 point per game overall.

We’re obviously not talking Aaron Rodgers-type value here. But football is a 46-on-46 sport: It’s hard for any one player (aside from a quarterback) to matter much. A reliable 1 point per game is pretty significant.

Chicago had an average margin of -2.1 points per game last year, so with Hester’s departure, let’s say the team is starting out in a 3-point hole. If the offense gets worse or the defense gets better, it could go either way from there. 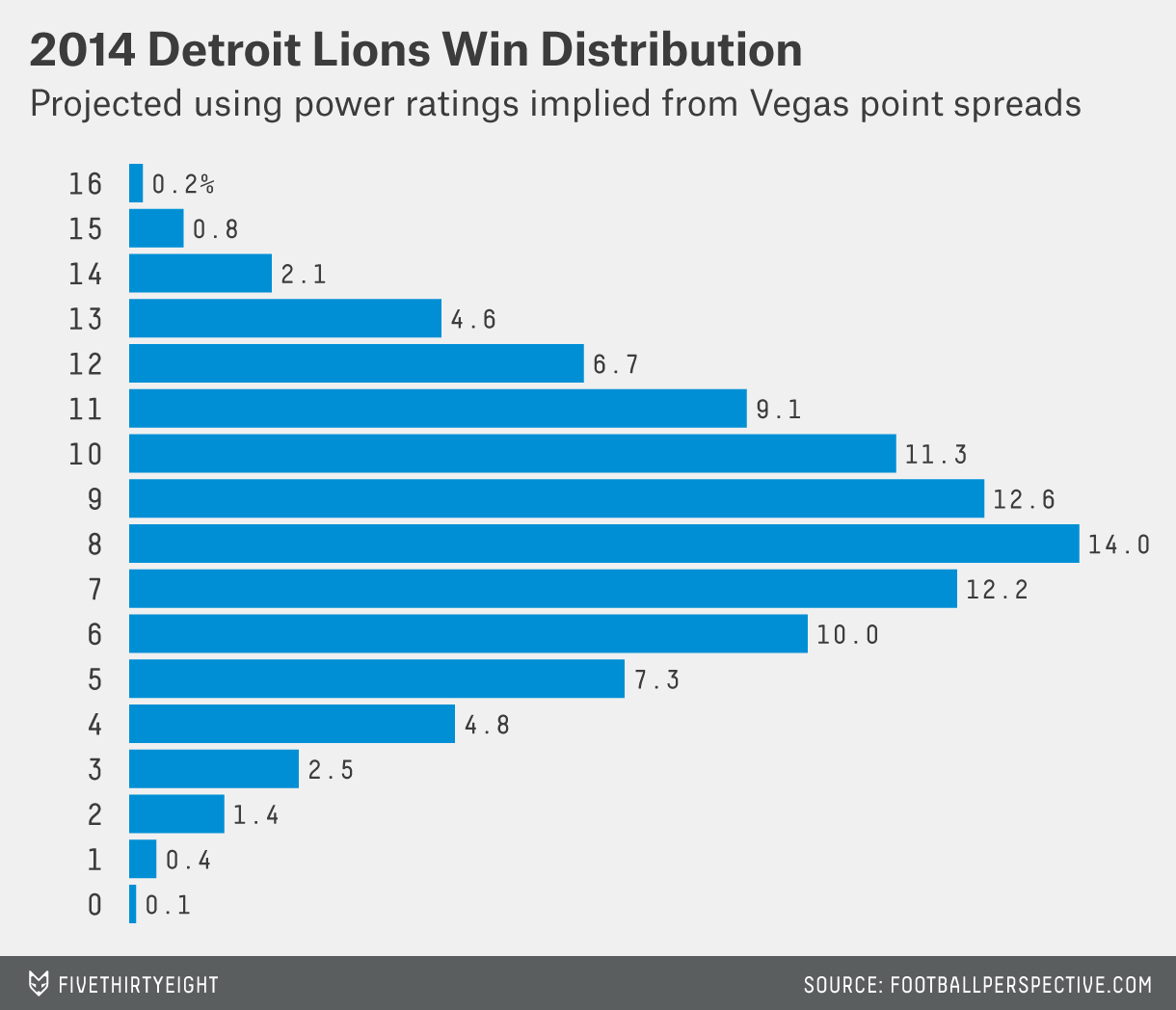 Last year the Detroit Lions finished 7-9, the second-highest win total of quarterback Matthew Stafford’s career. Despite throwing for 4,650 yards and 29 TDs, Stafford now faces headlines like this one from Fox Sports: “Stafford needs to bounce back in a big way.”

According to that article, Stafford “must cut down on his crucial mistakes when it’s make-or-break time.” Presumably, this refers to the six fourth-quarter interceptions Stafford threw in one-score games last year.

But, see above: Interceptions are hard to interpret. Stafford also had seven touchdowns under those circumstances, and four of his six interceptions were with his team trailing.12 So let’s break down Stafford’s interception rate a bit further:

In other words, if there’s one spot where Stafford has been making an unusually high number of mistakes it hasn’t been “make-or-break time,” it has been earlier in the game, when his team is up one or fewer scores and most QBs would play it safe (league average interception rate is around 2.3 percent under those circumstances). 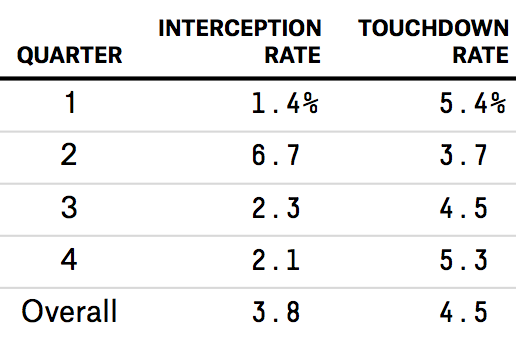 Of course, while throwing interceptions with your team up one score isn’t generally wise, it could be worth it if it’s helping you gain a ton of touchdowns. Indeed, Stafford throws a good number of TDs in these situations.

To generalize a bit, you can think of the sum of a player’s touchdown rate and interception rate as his “aggression level.” Stafford is a fairly aggressive quarterback overall, but his aggression level while ahead by one score or less in the second quarter is 10.4 percent, which is off the charts compared to the league average of 6.8 percent. This isn’t really the best time to get aggressive, and it isn’t really working for him. 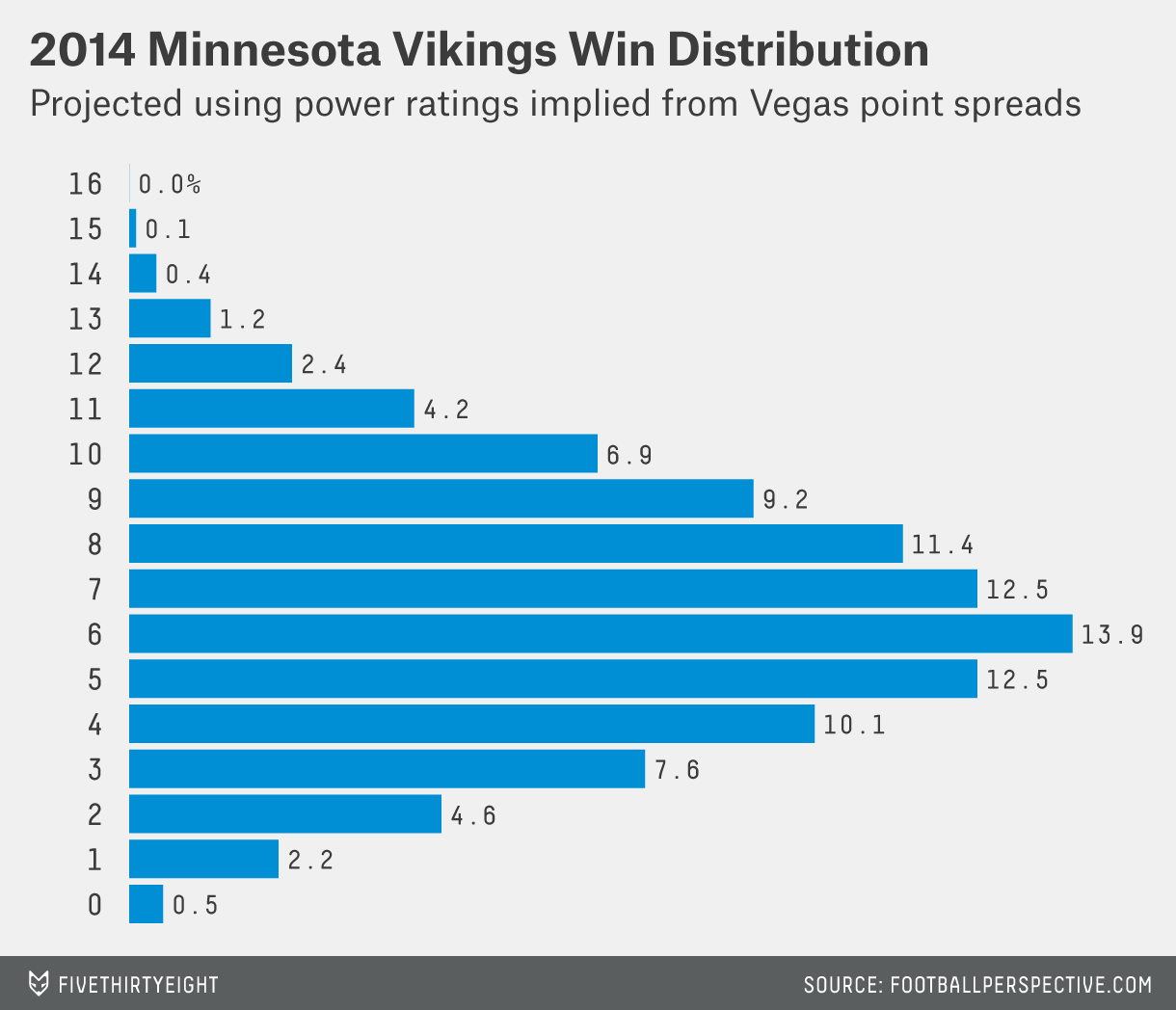 Adrian Peterson now has more than 10,000 yards rushing and 91 touchdowns in his seven-year career, giving him over 2,000 more yards and 24 more touchdowns than anyone in the last seven years. Yet the Vikings finished 5-10-1 last year, their third 10-loss season in four years. They haven’t had a top-10 offense since Brett Favre’s miracle year, nor before that since the Randy Moss era.

The utility of the running game in football is still an open question. While pass-heavy offensive approaches typically gain points (and wins) more efficiently than run-heavy ones, we’re nowhere near game-theoretical dominance. In other words, however marginal it may become, the running game still has its uses:

Of course for Nos. 1 and 2 to work most efficiently, you have to run effectively. And running effectively mostly means No. 3.

While Peterson breaks a larger share of long runs than typical running backs, he is neither a consistent gainer nor a producer of high-leverage situations. 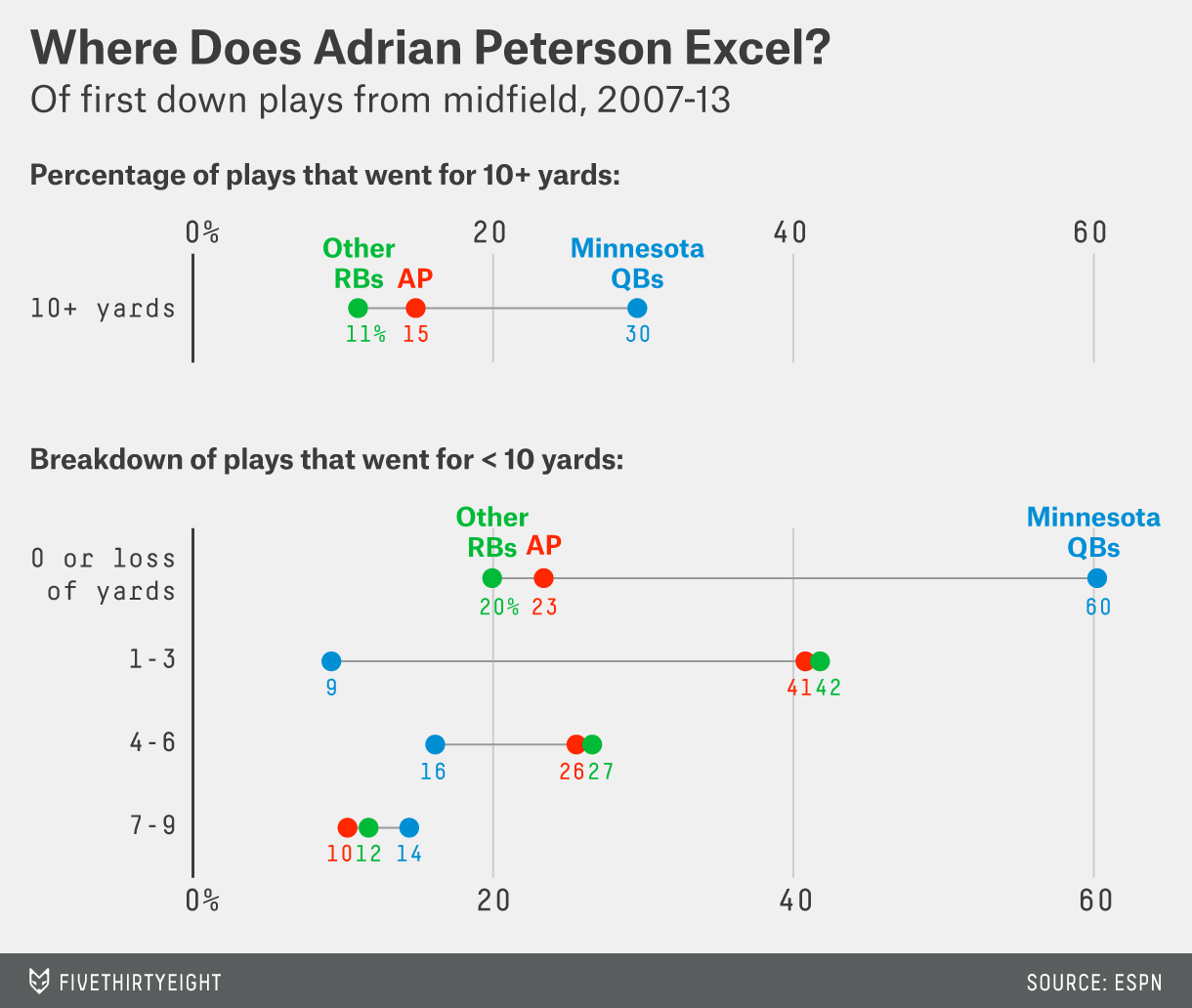 Obviously Adrian Peterson’s long runs are worth something: They’re worth a lot of yards. But yards are easier than ever to come by in today’s game. No matter how great a running back is at breaking long ones, he’s not going to be as efficient at gobbling up yards as his team’s passing game is (no matter how mediocre the team’s quarterbacks are).

On the other hand, the better a team is at strategically maximizing the running game, the more valuable those “bonus” yards become — because the running plays that produce them are no longer taking the place of passes.

None of this is to say that Peterson’s shortcomings necessarily reflect poorly on his running skills, no more than we can say the same for any running back’s underperformance. Peterson has simply produced a little below average at the bread-and-butter stuff that keeps the running game relevant, and this undercuts the value of his long runs considerably. With a better offensive line, or quarterback, Peterson’s value would improve doubly.