Who’s the best team in the NFL?

The answer is as muddled as at any point in the season. According to our Elo ratings, the answer is technically the New England Patriots, who overtook the Denver Broncos after beating them in Week 9. But the Broncos gained ground by beating the Oakland Raiders on Sunday while the Patriots had a bye. Just one Elo point now separates the teams; they’re tied for all intents and purposes.

A case could also be made for the Arizona Cardinals, who have the NFL’s best record at 8-1. But the deeper we go, the less impressive the Cardinals look. Jeff Sagarin’s “pure points” rating, based on margin of victory and strength of schedule, has the Cardinals just eighth in the league. Football Outsiders’ Defense-adjusted Value Over Average (DVOA) ratings, based on an analysis of play-by-play data, has them 15th. The Cardinals’ top quarterback, Carson Palmer, is out for the year. Elo, which tends to strike a middle ground between conventional wisdom and advanced statistics, has the Cardinals fourth.

A credible case could also be made for the Seattle Seahawks on the basis of their longer-term performance. They came into the season ranked No. 1 and are the fourth-best team so far this year on the basis of DVOA. And they looked as good as they have since Week 1 while beating the New York Giants 38-17 last week. The Seahawks’ next six weeks consist of home-and-home games against the Cardinals and San Francisco 49ers, and road games at Kansas City and Philadelphia. Within a couple of weeks, we could be talking about how the Seahawks playoff hopes are torpedoed, or how Seattle was the best team in the league all along.

If the elite teams aren’t as great as usual, and the worst teams are worse than usual, that means there are more wins (and Elo ratings points) to go around among the upper-middle class of the league. There is a glut of 12 teams at an Elo rating between 1532 and 1608 — somewhere between “slightly above average” and “pretty good.”

The Cincinnati Bengals, who lost at home Thursday against the Cleveland Browns, fell out of that group last week. These types of games — a clear underdog (the Bengals were 8.5-point favorites, according to Elo) winning definitively (the Browns won 24-3) — produce the biggest swings in the Elo ratings. In fact, the 53-point shift against the Bengals and toward the Browns is the largest of the season so far. (The largest swing of all time, 77 points, came Sept. 21, 2008, when the Miami Dolphins ended the Patriots’ 21-game regular-season winning streak by beating them 38-13 in Foxborough, Massachusetts.)

Even the result in Cincinnati, however, did nothing to clarify the playoff picture. The Browns, at 6-3, are first in the AFC North; the Bengals, 5-3-1, are second. Both have lower Elo ratings than the Baltimore Ravens and Pittsburgh Steelers, who are tied for third at 6-4. No AFC North team has better than a 31 percent chance or worse than a 20 percent chance of winning the division. Playoff odds for the rest of the league follow: 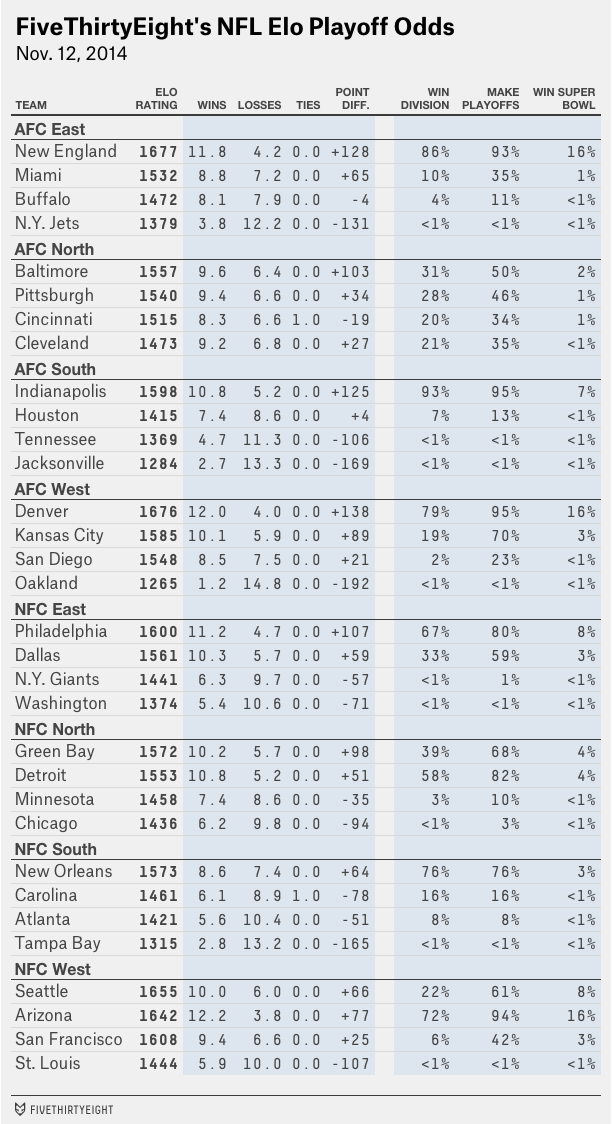 My ESPN colleague Gregg Easterbrook wrote this week about the inequities of the NFL playoff system. As Gregg noted, the 4-5 New Orleans Saints would make the playoffs if the season ended today (as NFC South champions). The 6-3 Green Bay Packers, meanwhile, would miss out.

One might protest that the Saints aren’t such a bad team: They have plenty of talent and a +26 point differential, and they’re 12th in the league in DVOA. Still, what division a team plays in makes a huge amount of difference to its playoff odds.

To demonstrate this, I extracted some additional data from our Elo simulations this week, estimating a team’s chances of winning its division based on its regular-season record. In the NFC North, for example, a roughly average division, teams finishing the season with 10 wins won the division 30 percent of the time. 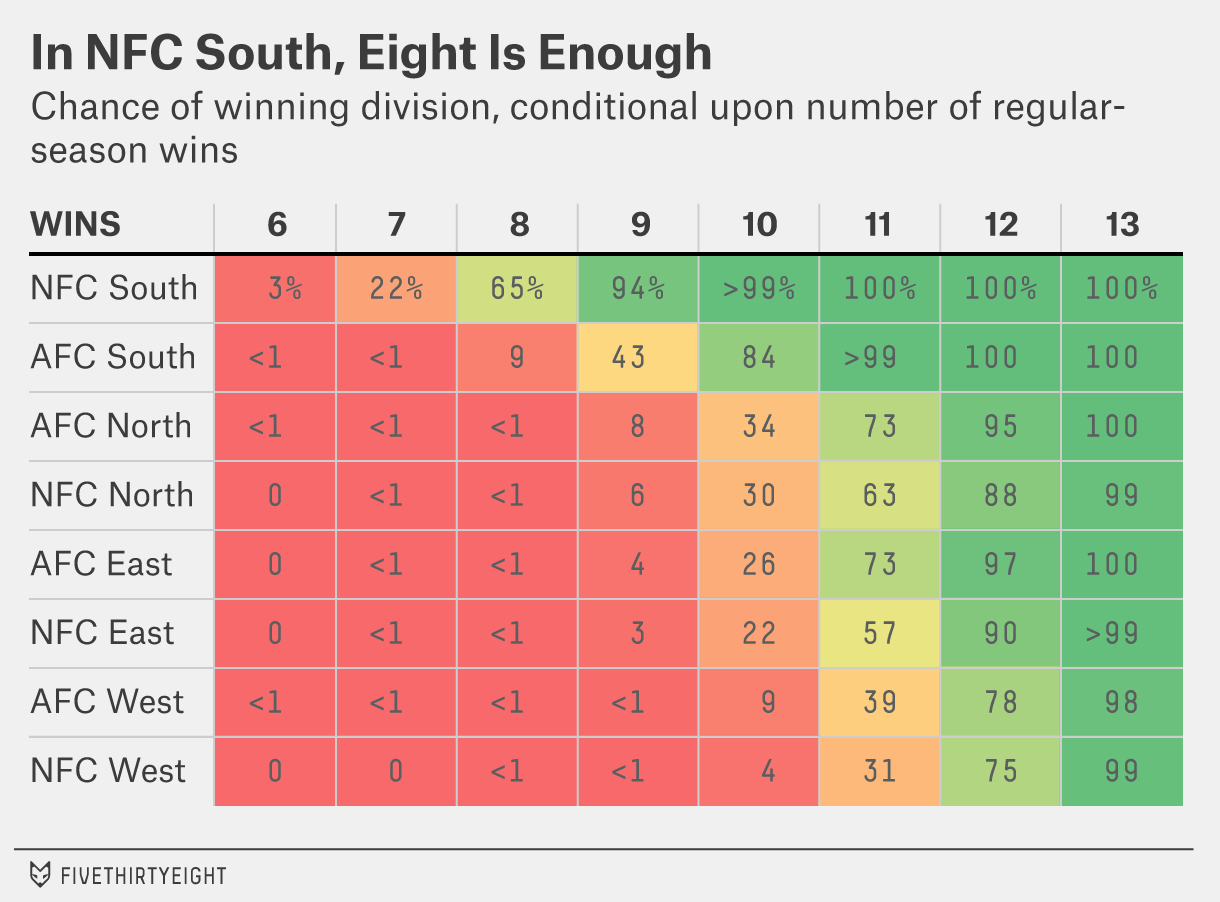 Even an eight-win finish would be good more often than not in the NFC South; teams finishing with that win total won the division 65 percent of the time. (This includes cases where the Carolina Panthers, who tied a game this year, finish at 8-7-1.) Seven wins might be enough. In one of the 5,000 simulations we ran this week, the Panthers even won the division with a 5-10-1 record.

If anything, this understates the importance of divisional placement. Not only are teams from weaker divisions more likely to make the playoffs with, for instance, a 9-7 record, they’ll also have an easier time achieving that record because they’re facing softer competition. And the NFL protects division winners in the playoffs, giving them a higher seed than wild cards and a home game in the opening round.

These problems will be hard to avoid so long as the NFL insists on having such small divisions and placing such importance upon them. In a four-team division, there’s a 1-in-16 chance that all four teams will be below average — one of them will make the playoffs anyway. Because there are eight divisions, a case like that will come up about once every other season.

This is one reason I’d like to see the NFL expand to 36 teams, which would allow for six-team divisions. Short of that, the league could adopt any number of approaches to make division placement less important. The least radical would be to no longer prioritize division winners in setting playoff seedings. (A 7-9 division winner could still make the playoffs, but it wouldn’t get a home game.) More fun: The league could “bump” any division winners that failed to finish with a winning record and replace them with an additional wild-card team. 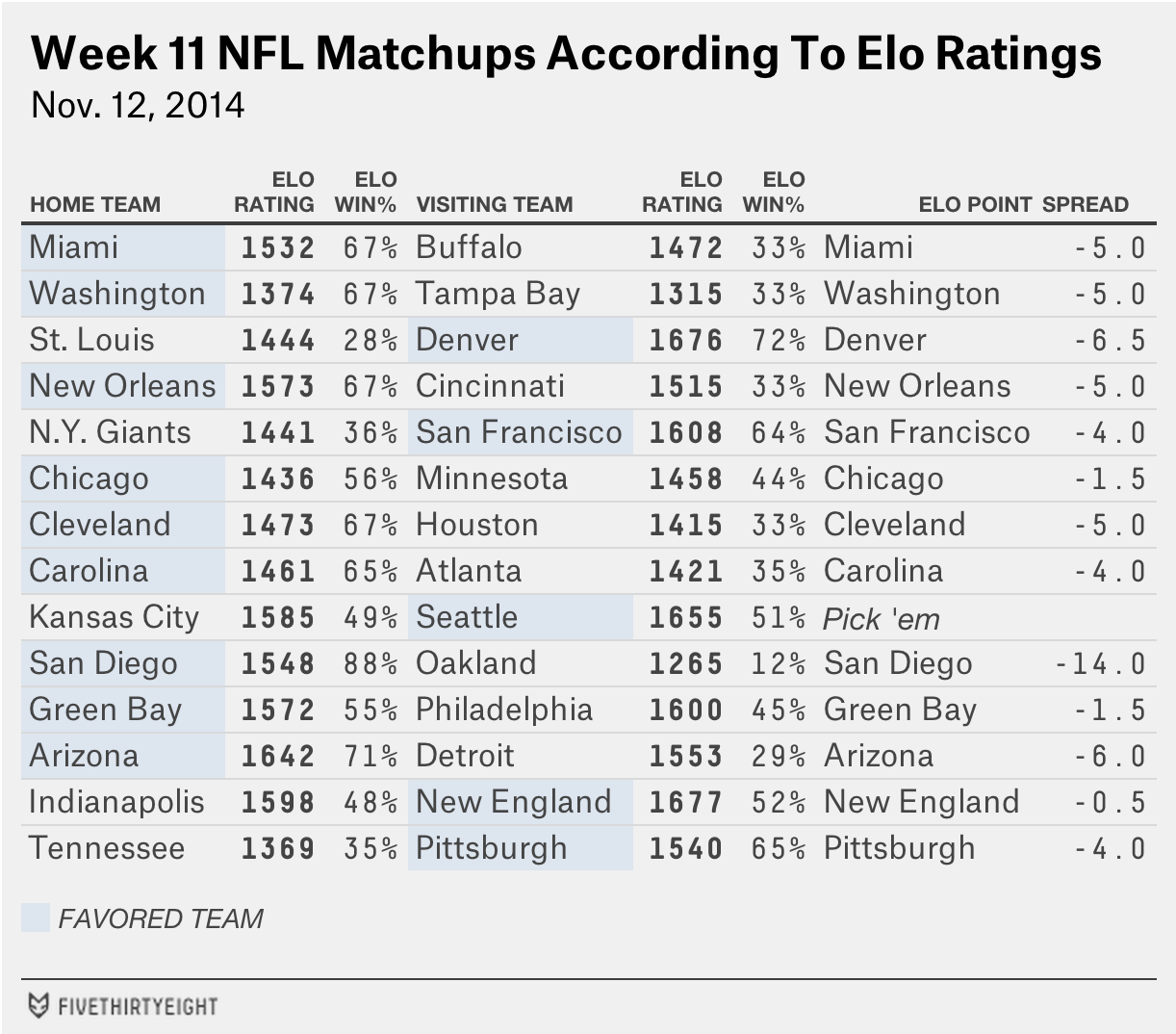 The point spreads implied by Elo ratings have just barely climbed to a winning record against closing Las Vegas lines. Still, we wouldn’t recommend that you bet on them. Indeed, as the season has worn on, there have been fewer and fewer differences between them, and most of those that exist are easy to explain. Elo is more bullish on the Cardinals and Philadelphia Eagles this week than Las Vegas lines imply, for example, but it doesn’t know that their starting quarterbacks are sidelined.

Still, there’s a difference of opinion in what’s undoubtedly the biggest game of the week. Whereas Vegas has the Indianapolis Colts as 2.5- or three-point favorites at home against the Patriots, Elo has the Patriots just slightly favored. New England has been one of Elo’s favorite teams this year. It’s strange to think Vegas could underrate a team as high-profile as New England, but that’s been the case historically: The Patriots have covered the point spread about 57 percent of the time since Bill Belichick took over as coach.