Going into Week 9, the No. 1 slot in our Elo ratings had been the exclusive province all season long of last year’s Super Bowl participants, the Seattle Seahawks and Denver Broncos. In fact, the last time a team other than Denver or Seattle ranked first in Elo was Week 19 of last season, when the San Francisco 49ers owned first place after beating the Carolina Panthers on the road in the NFC divisional playoffs. (They would cede that ranking to Seattle the very next week.)

This week, though, the New England Patriots have finally broken the Denver-Seattle duopoly on No. 1 after the Patriots crushed the Broncos 43-21 Sunday afternoon. How unusual was the Seahawks’ and Broncos’ long stranglehold on the top slot? Going back to the advent of the 16-game schedule in 1978, it’s the eighth-longest span into a season it’s taken for a third No. 1-ranked team to emerge. Last season, it took seven weeks for Seattle to wrest No. 1 away from a Denver/New England duumvirate.

For the Patriots, it’s a long-awaited return to a familiar spot. New England occupied No. 1 in 27 (!) consecutive editions of the Elo rankings between Week 19 of the 2011 season and Week 2 of the 2013 season. And since 2000, they’ve spent more weeks at No. 1 (102) than the next three most frequently top-ranked teams (the Indianapolis Colts, Green Bay Packers and St. Louis Rams) combined.

But of all teams, the Patriots should know that a No. 1 Elo ranking midway through the season is no Super Bowl guarantee. They sat atop the league through the first nine weeks of both the 2012 and 2007 seasons but failed to hoist the Vince Lombardi Trophy either season. (Since 1978, the top-ranked team through Week 9 has gone on to win the Super Bowl at a 41.7 percent clip.)

New England also faces a difficult schedule. It has a bye this week, but after the break it will have to travel to Indianapolis to face the fifth-ranked Colts. Then, following a home date against the 17th-ranked Detroit Lions, the Patriots must go on the road against the No. 12 Packers and the No. 14 San Diego Chargers in back-to-back weeks, with the surging No. 16 Miami Dolphins waiting in the wings after that. An average (1500 Elo rating) NFL team would be expected to win only 46.6 percent of the Patriots’ remaining games, which means they have the seventh-hardest remaining schedule of any team in the league.

Our Elo-based simulations give the Patriots just a 16 percent probability of winning the Super Bowl, which is well below the aforementioned historical average for top-ranked teams through nine weeks. Part of that is simply an artifact of league and playoff expansion. Since the NFL adopted its current size and divisional format in 2002, the top-ranked team through Week 9 has won the Super Bowl 25 percent of the time, a rate more in line with New England’s simulated odds. But 2014 has also been a strange year in terms of the distribution of ratings across the league’s 32 teams. The Patriots’ 1677 Elo rating at No. 1 is 21 points below the average for that slot through Week 9 from 2002 to 2013, while 18 of the next 22 highest-rated teams have better Elo ratings than the average for their ranking from the previous 12 NFL seasons.

In other words, New England isn’t as strong as the typical No. 1, and there is an unusual number of solid teams out there for the Pats to tangle with en route to the Super Bowl. That lends credence to the growing talk of 2014 being a banner season for parity in the NFL.

Meanwhile, the league’s nine worst teams by Elo are far worse than usual, culminating with the Jacksonville Jaguars and Oakland Raiders each falling more than 50 points behind the typical ratings of the NFL’s two worst teams through nine weeks. It will be worth monitoring whether this year’s atypical dispersion of Elo ratings is a one-year quirk or part of a larger trend.

Here are the current playoff and Super Bowl odds for all teams: 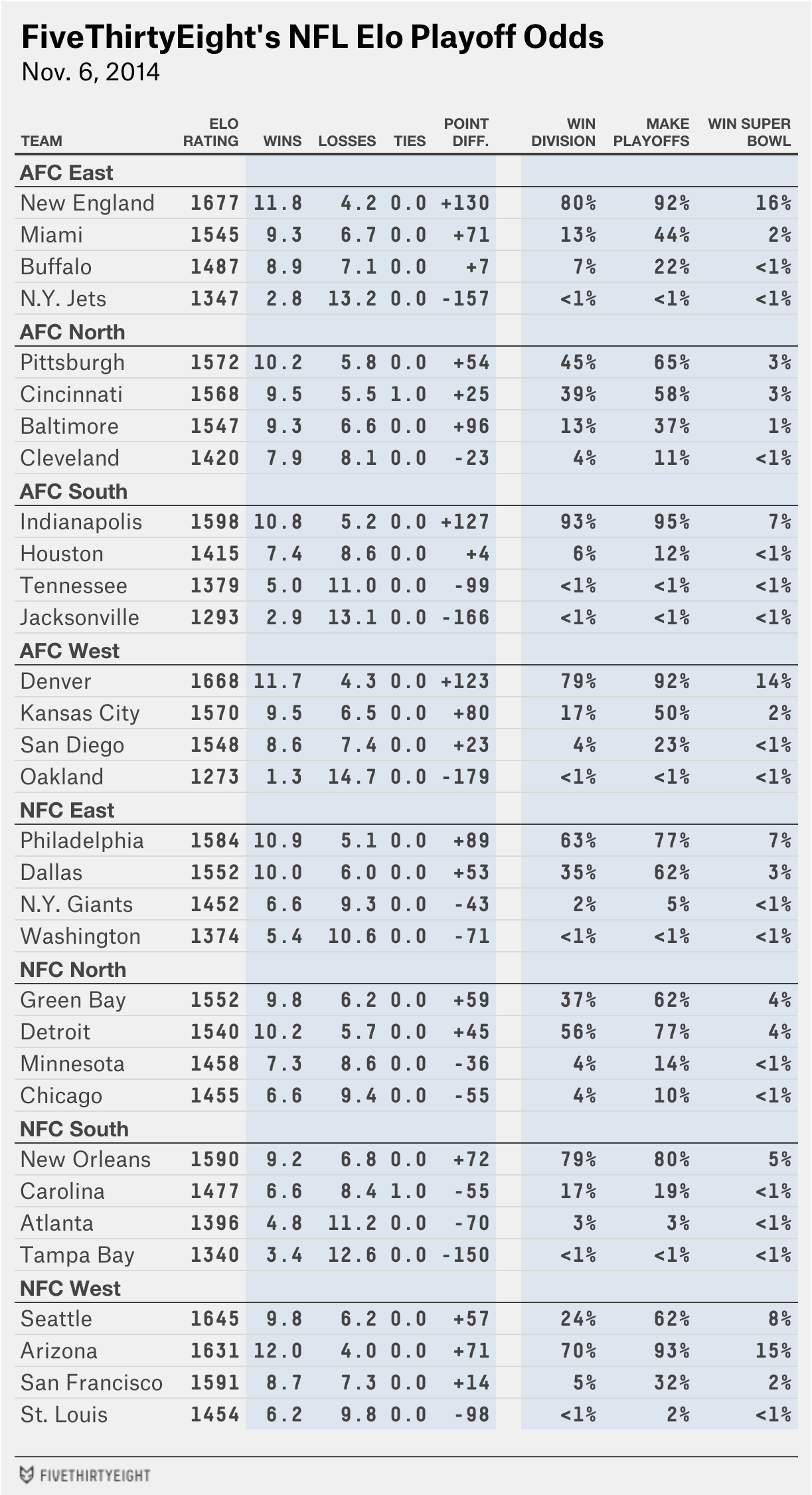 I mentioned that San Francisco had defeated Carolina (who ranked fifth in Elo at the time) to briefly claim the No. 1 ranking during last season’s playoffs. This year, however, neither team has enjoyed the same kind of success, going a combined 7-9-1. And there’s a 55 percent chance that both will be shut out of a return trip to the postseason.

After starting the season 1-2, the 49ers had regained some measure of playoff probability with three straight wins over the Philadelphia Eagles, Chiefs and Rams in Weeks 4 through 6. Going into Week 7, they even had an NFC West-leading 65 percent probability of making the playoffs, as well as the division’s best projected end-of-season win total in our Elo simulations. But a pair of losses sandwiched around a bye week have left San Francisco on the verge of missing the playoffs entirely. Its current playoff probability stands at 32 percent after taking into account their mediocre record (4-4), the difficulty of their remaining schedule (ninth-hardest), and the strength of the teams they’d have to beat out for a wild card (as their hopes of winning the NFC West have been all but extinguished).

Carolina’s chances of returning to the playoffs look even worse. Despite failing to win five of its previous six games (it lost four and tied one), Carolina still had a 44 percent probability of qualifying for the postseason before its game against the New Orleans Saints — but our weekly playoff implications article also identified Panthers-Saints as one of the most crucial matchups of Week 9. Sure enough, New Orleans’ 28-10 victory dropped Carolina’s playoff probability by 25 percentage points, leaving it with less than a 1-in-5 chance of making the playoffs.

In addition to the Panthers and 49ers, the other teams who lost the most from their playoff odds in Week 9 were the Baltimore Ravens and the Chargers in the AFC.

The cause for Baltimore’s decline was all about the division odds — predictably, its head-to-head loss against the Pittsburgh Steelers on Monday night had huge ramifications for the AFC North race. Going into the game, the Ravens had a 33 percent chance of winning the division, with the Steelers sitting at 28 percent; after the game, Pittsburgh’s chances had increased to 45 percent and Baltimore’s had dropped to 13 percent. (Neither team’s wild card odds really budged at all.)

San Diego’s dip, on the other hand, had little to do with a division race. The Broncos are rated so much higher than their AFC West competitors that our simulations see little chance they don’t win the division. That leaves the wild card as the only real viable path to the playoffs for the Chargers and Chiefs, both of whom are in a dogfight with each other — as well as the losers of the AFC East and North — for one of those two slots. (The AFC South loser is unlikely to make much of a wild card push.) Miami’s 37-0 pasting of San Diego on Sunday had direct consequences in that regard, boosting the Dolphins’ wild card probability by 17 percentage points as the Chargers’ chances dropped by 19 (with scarcely a change to either team’s division odds). 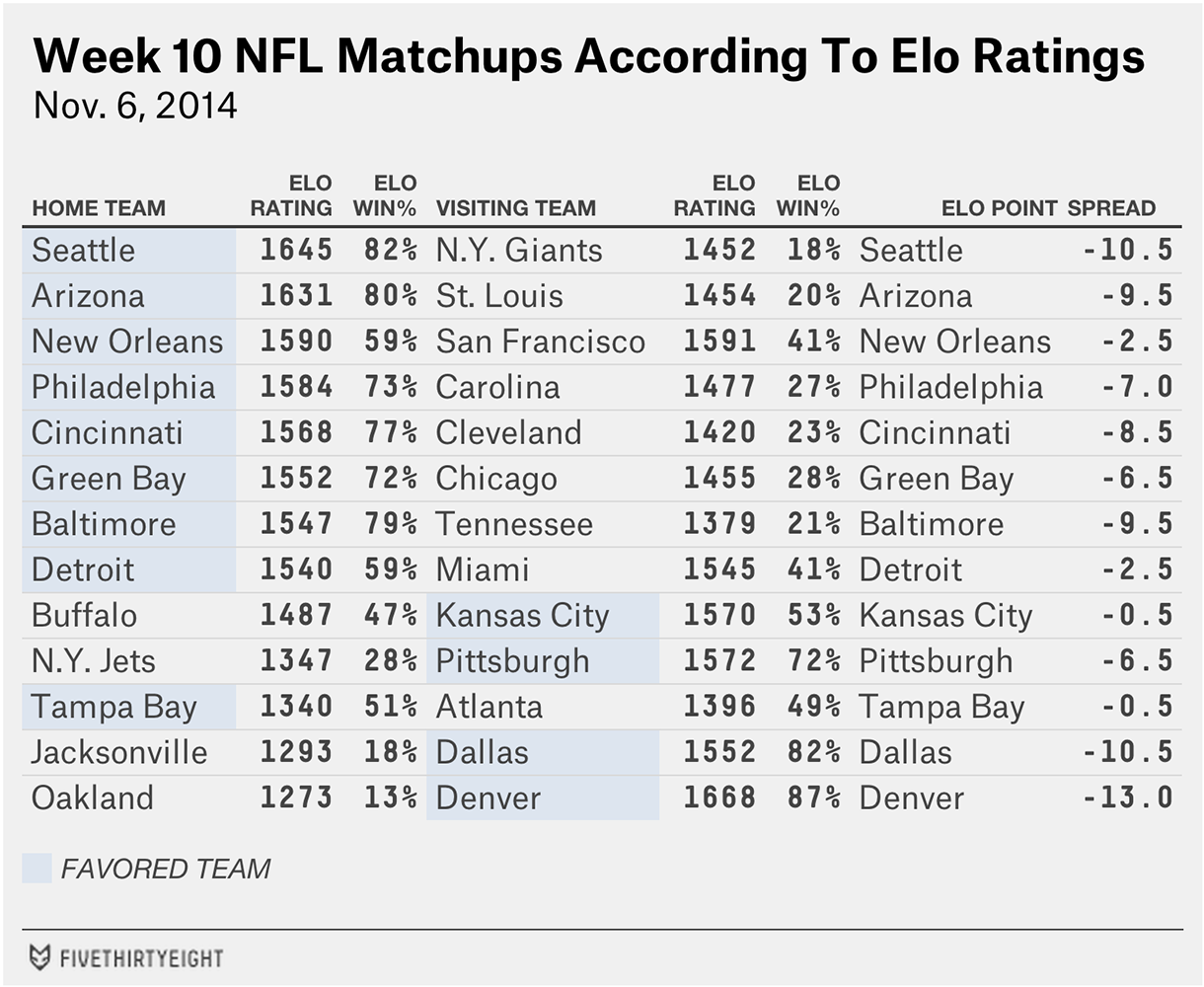 Although the Elo ratings are performing better against the spread in recent weeks, we still would strongly advise you not to take them to Vegas as a betting tool. Even so, it is always interesting to see how they differ from the spreads offered by the major sportsbooks.

This week’s biggest disparity is in the Dallas Cowboys-Jaguars game, which is not only taking place in London, but adds the wrinkle of Dallas quarterback Tony Romo’s availability being in question. With the possibility that the Cowboys will once again have to start backup QB Brandon Weeden, who oversaw the team’s Week 9 defeat to the Cardinals, the oddsmakers have dropped Dallas to a mere 6-point favorite against the lowly Jaguars, rather than the 10.5-point favorite the Elo ratings would suggest.

Aside from that change, the other big discrepancies against Vegas this week involve the Cardinals and Rams (the books have been comparatively down on Arizona all season, relative to Elo) and the Cincinnati Bengals and Cleveland Browns (Elo rates Cincinnati slightly higher — and Cleveland slightly lower — than Vegas’s power ratings would value the two teams). But in the Detroit-Miami tilt, which may go down as the biggest game of the week from a playoff-implications perspective, both Vegas and Elo agree: The hosting Lions should be favored by about a field goal.

(Nov. 6, 2:04 p.m.): A previous version of this article said the Dallas Cowboys had a 75 percent chance of defeating the Jacksonville Jaguars on Sunday. Dallas should have an 82 percent win probability, because it has an Elo difference of +259 and there is no home-field effect in either direction.