Unlike the previous week, when three of the top five teams in our Elo ratings lost, Week 8 of the NFL season was a good time for the elite. The No. 4 San Francisco 49ers were idle, but the top 3 teams in Elo won, headlined by the Denver Broncos beating the San Diego Chargers by 14 to close in on the majestic 1700-point Elo barrier (a distinction last held by an NFL team when the Seattle Seahawks were putting the finishing touches on their Super Bowl rout of the Broncos in February).

It was not, however, a pleasant week for the next-highest tier: the good-but-not-great teams. Among Nos. 5 to 11 in last week’s edition of the Elo ratings, only the No. 8 Arizona Cardinals won. The rest were all tripped up, with the Dallas Cowboys, Indianapolis Colts and Green Bay Packers each seeing their ratings decline in excess of 25 points. (Remember, every 25 points of Elo is worth a point in the predicted point spread — so they each lost more than a point per game of future margin-of-victory potential last week.)

But out of that group of Week 8 losers (Dallas, Indianapolis, San Diego, Green Bay, the Baltimore Ravens and the Philadelphia Eagles), four teams — the Chargers, Ravens, Packers and Eagles — were not even favored by Elo to win going into the week. All four were on the road. Philadelphia and San Diego had the added misfortune of facing teams ranked ahead of them. That’s why, with the exception of the Packers (who lost to New Orleans by three touchdowns), the ratings damage to those not-quite-elite teams was relatively minimal despite the losses.

Dallas and Indianapolis had no such excuses, though. The Colts’ defense was decimated by Ben Roethlisberger and the Pittsburgh Steelers, contributing to a 31-point drop in Indianapolis’s Elo rating. And the Cowboys lost to Washington as 12.5-point home favorites, leading to a 28-point Elo decline that allowed both Arizona and San Diego (in a loss!) to pass them in this week’s rankings.

The Cowboys were of special interest because they’d been so hot going into the Monday-night flop against Washington. Since the beginning of the season, no team had added more Elo points than Dallas, who started the year with a 1496 mark but sat at 1608 before Monday’s game. Although it would have been difficult to foresee a loss to such a lowly squad (Elo said the Cowboys had an 86 percent probability of beating Washington), I wondered whether it shouldn’t have been overly surprising to see some regression to the mean in Dallas’s future, given its meteoric rise.

But based on a sample going back to 1978, there’s practically no relationship between the Elo gains made by a team through seven weeks and the change in its rating from that point until the end of the regular season. In other words, we shouldn’t have expected the Cowboys’ rating to bounce back toward their preseason form because our Elo implementation is avoiding autocorrelation properly — meaning that a team’s current rating should also be its expected rating over the remainder of the season.

At any rate, Dallas’s upset loss had real implications for the NFC East derby. Despite the Eagles’ loss, the Cowboys’ odds of winning the division dropped from 66 percent to 53 percent. Philadelphia’s chances jumped from 33 percent to 42 percent. Meanwhile, both teams lost ground in the wild card race — Dallas’s odds fell by 2 percentage points, and the Eagles’ chances dropped by 14 percentage points, more than any other team in the league. Much of that lost wild-card probability was soaked up by the NFC West, where Arizona, Seattle and San Francisco’s chances increased by a combined 22 percentage points.

Here are the current playoff odds for all NFL teams: 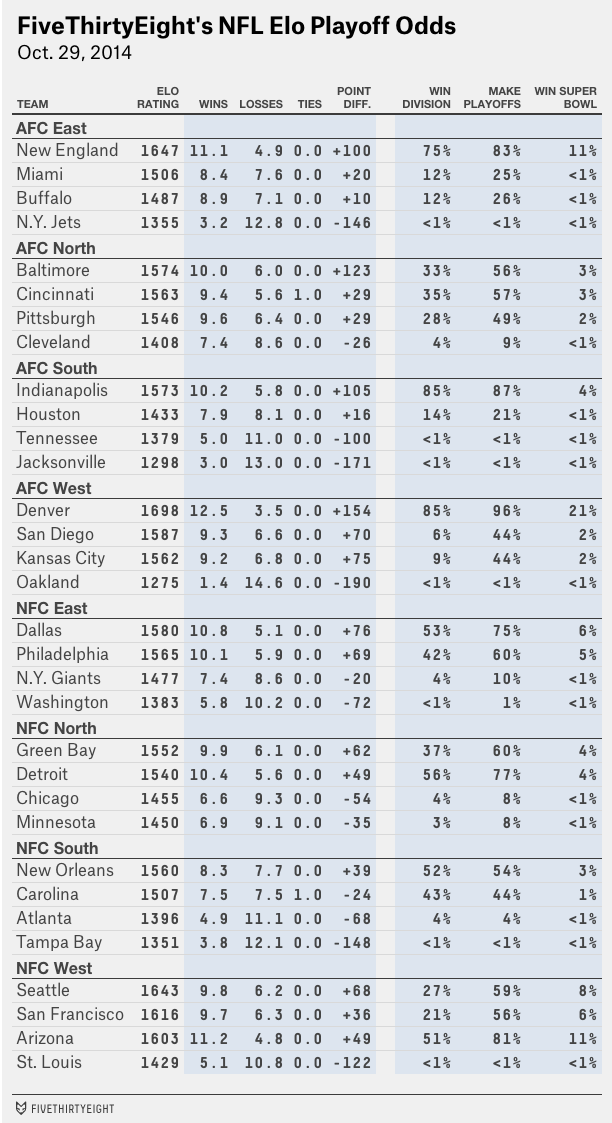 In terms of playoff probability, the real losers of Week 8 were the Ravens. Although the Elo-rating damage incurred by their 27-24 loss to Cincinnati was slight — they actually improved by one slot in this week’s rankings because Indianapolis was docked so much for its loss to Pittsburgh — their playoff chances dropped by 18 percentage points, the largest decline sustained by any team. Almost all of that was due to decreased odds of winning the AFC North. Concurrently, the Steelers’ chances of winning the division improved by 14 percentage points. With three teams locked in with division-win probabilities between 28 and 35 percent, the AFC North is the most wide-open division thus far.

The North also contains three teams whose chances of making the playoffs range from 49 to 57 percent after adding in the wild card. But whichever of those teams doesn’t win the division will be in for a tough battle with Kansas City and San Diego for wild card slots. According to our simulations, there’s better than an 84 percent probability that at least one AFC wild card will come out of either the North or West divisions.

Meanwhile, on the other side of the conference aisle, the New Orleans Saints’ victory over Green Bay went a long way toward carving out their path to the playoffs — one that almost exclusively relies on winning the NFC South. Projected to produce (by far) the losingest division winner in the NFC, the South’s teams have practically no chance of contending for a wild card. That honor could instead go to the two teams atop the NFC East (Dallas and Philadelphia) or their counterparts in the North (Green Bay and the Detroit Lions), though it looks more likely that at least one (if not two) of the West’s three big guns — Arizona, Seattle and San Francisco — will capture wild card berths in the NFC. 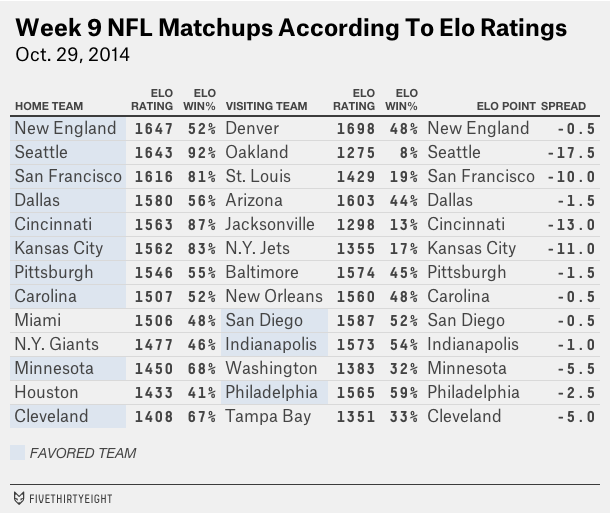 This week, there are a number of small disparities between Vegas’s lines and those predicted by Elo, but perhaps the most interesting involves the week’s marquee matchup: New England vs. Denver. The annual Brady-Manning showdown always draws its share of attention, but this edition pits our rankings’ Nos. 1 and 2 teams — essentially the Elo version of a BCS championship game. The Elo ratings consider the Patriots to be ever-so-slight favorites, while Vegas lists the Broncos as favored by a field goal. It’s not clear precisely what is driving the difference, although the history of our generation’s defining quarterback rivalry would seem to suggest intangible considerations tend to break in the direction of Brady and the Patriots.

CORRECTION (Oct. 29, 11:01 a.m.): A previous version of this article listed the incorrect Elo ratings for visiting teams in the Elo point spread chart. It also incorrectly said the top two teams in the NFC North are the Green Bay Packers and the Chicago Bears. They are Green Bay and the Detroit Lions.