The San Antonio Spurs’ Gregg Popovich won his third NBA Coach of the Year Award on Tuesday. To an extent, these awards are about which coach most exceeds expectations: They’re the opposite of coach firings, which are better predicted by a coach’s performance relative to preseason Las Vegas over-under lines than by his win-loss record. Popovich’s Spurs won 62 games in the regular season — more than the 55.5 wins Vegas predicted. That’s reasonably impressive, but nothing as compared to the Phoenix Suns’ Jeff Hornacek, who finished second in the balloting after winning 27 more games than Vegas anticipated.

What’s more amazing is how Popovich and the Spurs keep beating even consistently high expectations. From the 2006-07 through the 2013-14 seasons, the Spurs have outperformed their preseason over-under lines by a cumulative 35.5 games. That is the second-best total in the NBA, after the Suns, who were boosted by their extraordinary performance this year. It comes despite the fact that the Spurs have been projected to win an average of 53.2 games during this period, the highest figure in the league over this stretch. (These figures include the labor-shortened 2011-12 season, for which I’ve prorated totals to 82 games.) 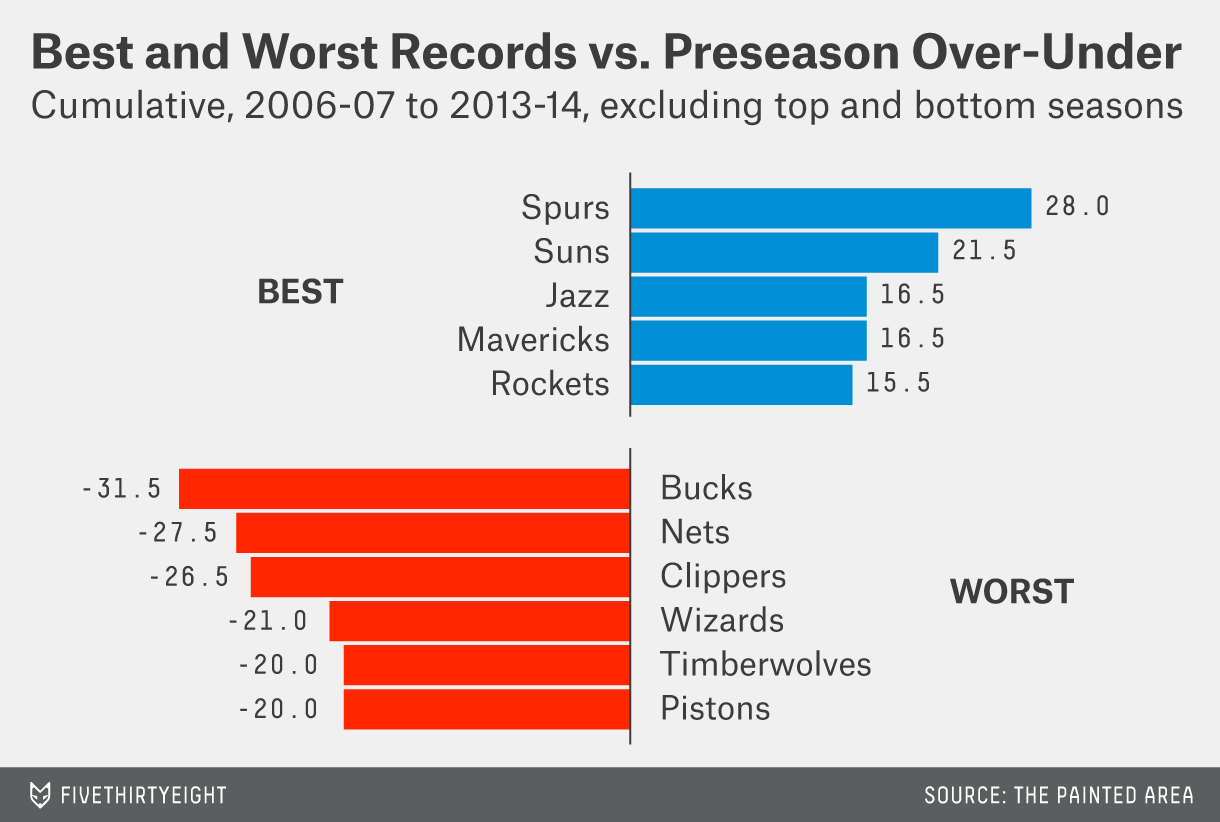 Popovich took over as coach of the Spurs early in the 1996-97 season. I wanted to evaluate his performance against the preseason over-under line further back, but I couldn’t find reliable numbers. However, there are records of how the Spurs performed against the point spread for individual games dating to the beginning of Popovich’s tenure. Popovich has done just as impressively by this benchmark.

The table below lists the Spurs’ win-loss record against the point spread since Popovich took over as coach. It includes regular-season and playoff games, although a handful of regular-season games from his earliest seasons are missing. In total, in the games for which we have data, Popovich has 843 wins, 728 losses and 32 pushes against the point spread. That’s a 53.7 percent winning percentage, ignoring pushes, a win rate that all but the best sports bettors in the world would have trouble sustaining. 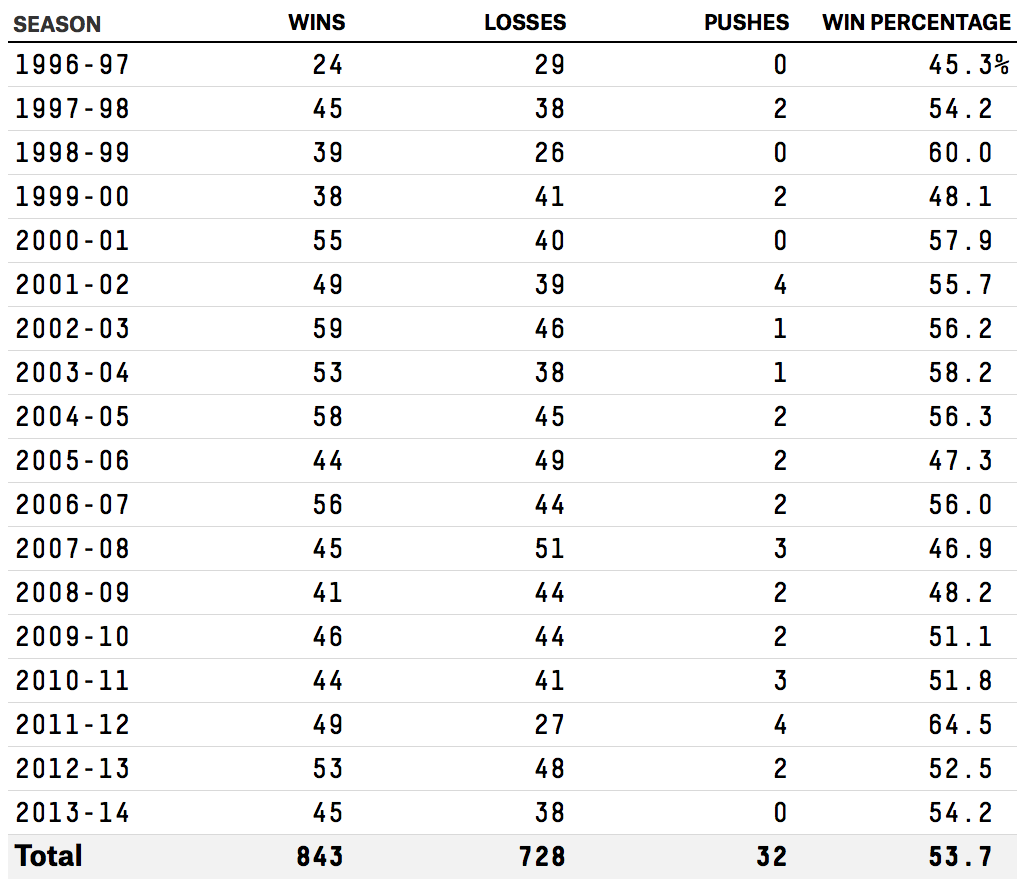 How plausible is it that Popovich has just gotten lucky? We can check this by means of a binomial distribution. If Popovich were just a .500 coach against the point spread, the probability that he’d achieve a 843-728 record or better against it is just 0.17 percent. In other words, this is an awful lot of games, and Pop has done awfully well. It’s likely that there’s something going on — something the betting public has been missing. (And it’s something that it has been missing continually; Popovich’s edge has not abated recently. The Spurs’ record against the point spread over the past five seasons is 54.5 percent.)

Another theory: Perhaps the Spurs tend to perform poorly early in the season — lowering bettors’ expectations — and then improve as Popovich determines the strengths of his roster and adjusts? That doesn’t quite pan out. Since the 1997-98 season, the Spurs are 53.5 percent against the point spread in the first 20 games of the regular season, about the same as their performance overall. (They have done somewhat better against the point spread — a 55.9 percent winning percentage — during the playoffs.)

Maybe there’s something odd about the Spurs’ point distribution? If they took an unusual number of blowout losses for a good team — say, games when Popovich was resting his starters — that could artificially lower their average margin of victory and lead bettors to underrate them in other matchups.

However, the Spurs’ point distribution appears to be relatively normal (both in the common-language and mathematical senses of the term) and relatively symmetrical about their average margin of victory. The Spurs have been somewhat less likely to win or lose games by exactly one point than the normal distribution would predict, but this is true of all NBA teams, largely as a result of late fouling. I don’t want to completely dismiss these explanations: How NBA teams manage endgame situations is something that can affect their scoring distribution and performance against the point spread quite a bit. But there’s nothing obvious that jumps out about the Spurs. Nor have they won more games than would be expected based on their overall scoring margin. 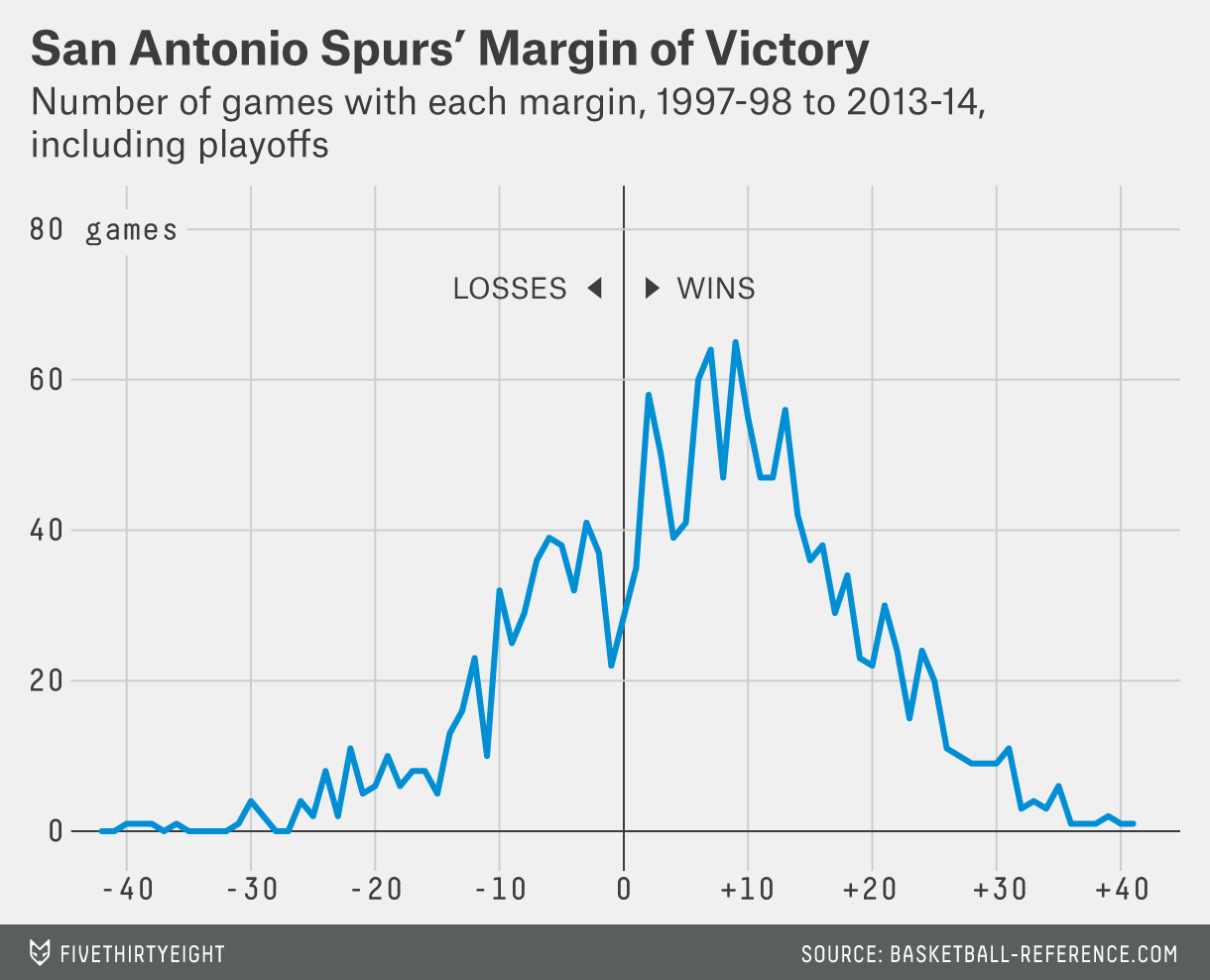 Another tempting explanation is that the Spurs, under Popovich, have great “intangibles” that bettors underrate. Undoubtedly, Popovich (like Tim Duncan) is a great leader. But eventually those intangibles should manifest themselves in the form of the Spurs winning more games than they otherwise would, and bettors should see the results and adjust accordingly. Furthermore, Popovich and the Spurs have a reputation for strong coaching and veteran leadership that could be recognized by the betting market. For many years, Popovich has ranked at or near the top when NBA general managers were asked to rank the top coaches.

In the absence of an explanation, I was curious about another data point. The coach I think of as being most Pop-like is Bill Belichick of the NFL’s New England Patriots. Like Popovich, Belichick seems to have a preternatural ability to make the most of his circumstances — he got 11 wins out of Matt Cassel! Like Popovich, Belichick has a reputation as a great and ruthless tactician.

I’m aware of the risk of confirmation bias here. If you seek out coaches who have a reputation for exceeding expectations, you’re likely to find expectations exceeded in all sorts of data, including their performance against the point spread. Nevertheless, it’s worth asking whether there is something about coaches like Popovich and Belichick that leads them to outperform bettors’ expectations.

But I have a romantic notion of what could be going on.

What you might say about Popovich is that he’s been uniquely able to stave off regression to the mean. He adopts tactics and strategies to suit his situation; he stays one step ahead of his opponents. Under Popovich, the Spurs have succeed as an old team and as a young team, and as a fast-paced team and a slow-paced team. There isn’t much gimmicky about Popovich.

Perhaps in staying one step ahead of his opponents, he has stayed one step ahead of Las Vegas. The reason it’s hard to succeed in sports betting, or in any other market-based activity, is not just that markets are reasonably efficient to begin with. It’s also that when you’ve identified a historical tendency worth exploiting, other participants in the market may have found it as well. You may have an advantage for a while, but it will evaporate soon. Or, like in the game rock-paper-scissors, your opponents will exploit you for trying to exploit them.

But what if your advantage is not in finding one particular loophole in the market, but in having the aptitude to continually come up with new advantages? Before your opponent has identified a counter to your tactic, you’re on to the next tactic. Great poker players have this skill: They have a sense for when a particular tactic in a particular situation has gone from being underutilized to overutilized in the poker “market.” They’ve adjusted a moment before everyone else.

My romantic notion — my intuition — is that the way coaches like Popovich and Belichick exploit edges in their games is pretty similar to how sports bettors exploit edges in theirs. So the fact that opponents have never caught up with Popovich and Belichick may have something to do with why betting markets haven’t either. I do know that I wouldn’t bet against Popovich or Belichick. And I wouldn’t want to play poker against them.