It was the age of foolishness. It was the summer of trading three draft picks for Andrea Bargnani. It was the autumn of J.R. Smith being suspended for marijuana possession. It was the winter of disparaging the shot clock.

It was the New York Knicks’ 2013-14 season. So when Mike Woodson was fired as the coach of the Knicks on a warm, spring day in Gotham Monday, New York breathed a sigh of relief.

But Woodson’s problem wasn’t just that the Knicks were bad. The Knicks are usually bad. Woodson’s problem was that the Knicks — for a change — were expected to be good. They’d won 54 games and gone to the Eastern Conference semifinals the year before. Preseason over-under lines pegged their win total at 49.5 games. When my ESPN colleague Kevin Pelton, through his SCHOENE system, instead projected the Knicks to win 37 games, his projection threatened to turn Knickerblogger, the eminently sane and stats-friendly blog, into the basketball version of “unskewed polls.”

In the NBA, where about 30 percent of the league turns its head coach over every season, these expectations matter as much as reality. I mean that literally: Las Vegas’s preseason over-under lines predict coach turnover just as well as actual wins and losses do.

I went back and collected preseason over-under lines dating back to the 2006-07 season. I compared them to each team’s actual record during the regular season. Then I ran a logistic regression analysis. The dependent variable is whether the team kept the same head coach from the start of that regular season to the next one. Here are the results:

The regression output contains two variables: exp_w (the number of games a team was expected to win, per Las Vegas) and act_w (actual wins). For the 2011-12 NBA season, which was shortened by a player lockout, I’ve prorated both totals to 82 games.

You may notice that the coefficient on each variable is almost identical, though they have opposite signs. What that means is that an expected win hurts a coach about as much as an actual win helps him. 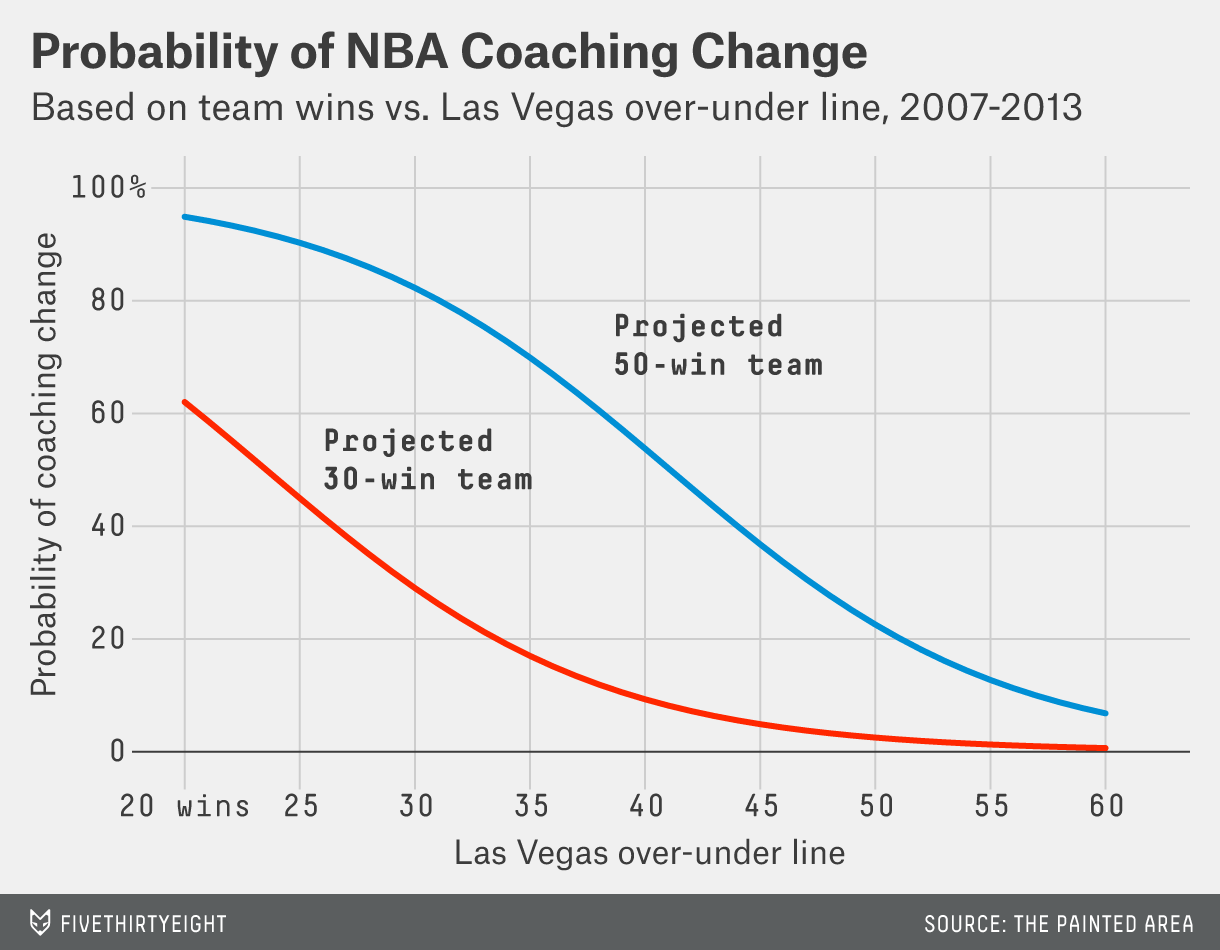 Lest this seem too abstract, I’ve compiled a list of all teams since the 2006-07 season that underperformed their over-under line by 10 games or more. There are 33 of these. Here’s what happened to their coaches:

Other factors also affect a coach’s odds of being fired. Deep playoff runs help coaches. First-year coaches sometimes get mulligans and are less likely to be fired. We’ll save that discussion for another post, however.

The lesson is simple: A coach is not long for his job when expectations run wild, as they often do in New York. With the benefit of hindsight, it now seems likely that Woodson’s Knicks overachieved in the 2012-13 season. That only made it harder for him to keep his job this year.