NFL Playoff Implications, our weekly guide to what games matter and to whom, returns for Week 11 of the NFL season. For an explanation of the methodology, see here.

UPDATE (Nov. 15, 11:46 a.m.): The interactive tables above have been updated to include the result of Thursday night’s BUF-MIA match-up, and that game has been removed (the text of the article has not been updated).

In our article on Week 9’s playoff implications, we focused on the game between the Denver Broncos and the New England Patriots, and the impact it had on the race for the AFC’s top seed. The Broncos were blown out in that game, 43-21, leaving that No. 1 seed up for grabs (although Denver is still a 56 percent favorite to claim it).

This Sunday night, the Patriots visit the Indianapolis Colts in a game with similarly significant implications for the top two AFC seeds. The first and second seeds in each conference receive a bye in the first round of the playoffs, and as we pointed out last week, this is a significant advantage and greatly increases a team’s chances of reaching the Super Bowl.1

For Indianapolis, the playoff race is all over but the seeding. Much like the New Orleans Saints in the NFC South, the Colts are division winners by default, with no significant competition from the Houston Texans, Tennessee Titans or Jacksonville Jaguars. And of the Colts’ remaining games, none looks to have a bigger effect on their playoff seeding than this week’s matchup against the Patriots. For both teams, the chances of securing a first-round bye swing by more than 50 percentage points depending on the game’s outcome. With a loss to the Patriots, the Colts may find themselves with very little to play for in Weeks 12-17. Their playoff outlook would largely be confined to those third and fourth divisional seeds.

A victory for New England would push its first-round bye probability to 75 percent, and keep the pressure on Denver for the top seed. Because of head-to-head tiebreakers, Denver, having beaten the Colts and having lost to the Patriots, would much prefer a Colts victory. 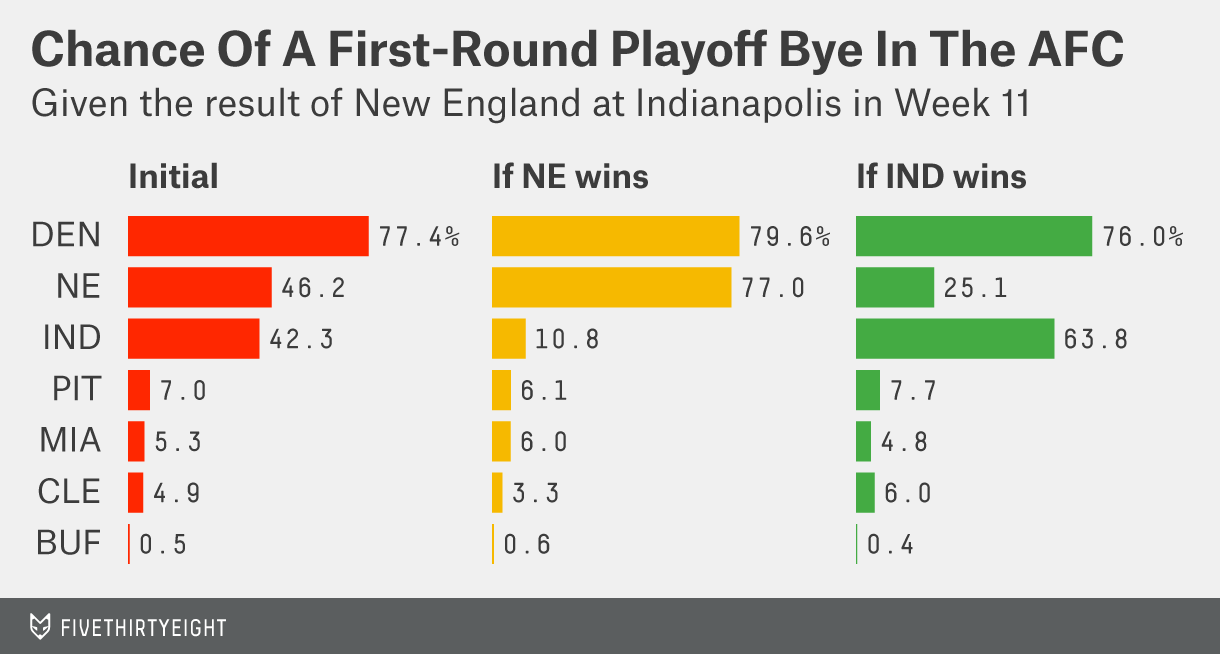 New England, while still the favorite to win its division, is not as secure in that position as Indianapolis is. Unlike the Colts, the Patriots have two division rivals that are keeping them honest: The Buffalo Bills and the Miami Dolphins.

Those two teams square off Thursday night in Miami. While both have identical win-loss records, the general consensus appears to be that the Dolphins are the superior team. The market clearly thinks so (and, by extension, the rankings at the bottom of this post think so, too); the Dolphins are favored by 5 points at home — and only half of that is due to home-field advantage. The various stat-based rankings agree as well, with Elo, DVOA, SRS and Advanced Football Analytics all placing the Dolphins above the Bills. A win by Miami would boost its playoff chances to 50 percent, and Buffalo’s would drop to just 4 percent. But a Bills upset would give them a slight advantage over the Dolphins and keep the AFC playoff race more interesting.

Before we move on to the NFC, the table below shows the total impact of each game on the playoff, division, first-round and top-seed races. For example, 12 teams’ playoff chances are significantly affected by the result of Cincinnati at New Orleans this week, and the cumulative swings for these teams add up to 66 percentage points. 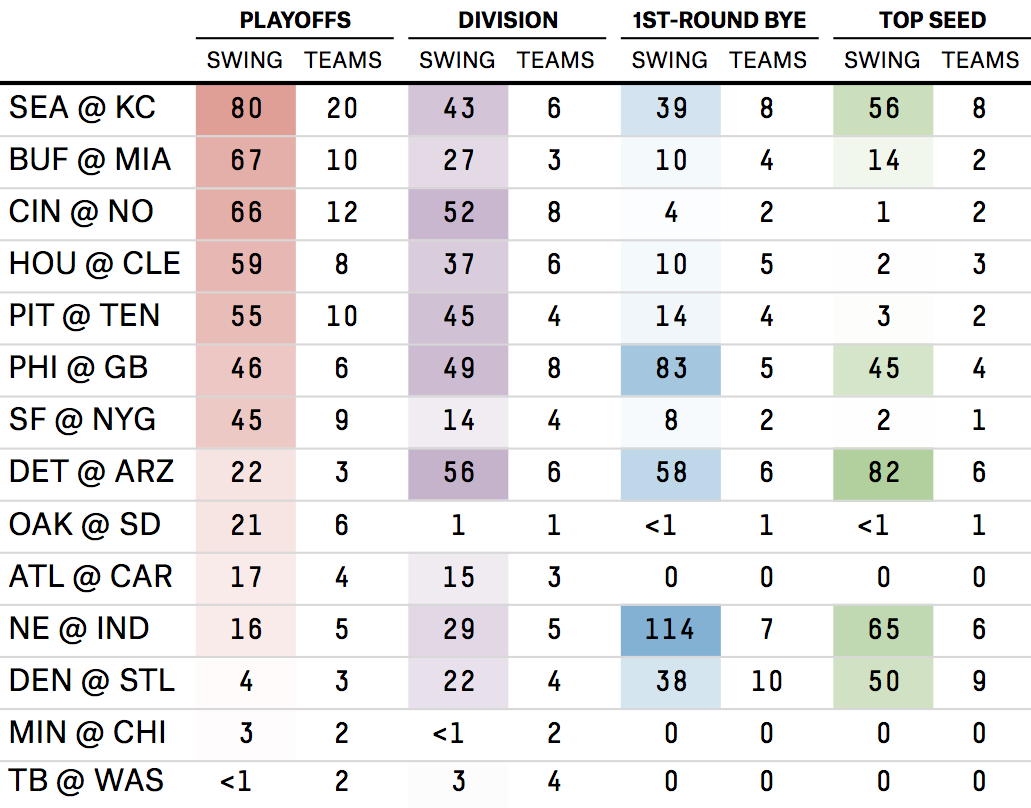 The playoff implications chart looks surprisingly bare for the NFC this week. In recent weeks, the NFC postseason picture has come into clearer focus. At this point, most of the playoff probability is concentrated among just eight teams. But there is still plenty of uncertainty in how the seeding will play out, particularly for the top two seeds.

Based on current records, those top two seeds would be the Arizona Cardinals and the Detroit Lions, who just happen to play each other this Sunday. With a victory over the Lions, the Cardinals would have a better-than-even shot at winning the top NFC seed. The Cardinals lost starting quarterback Carson Palmer last week to injury, but that’s not necessarily a reason for them to panic. The betting market seems to agree, as the Cardinals’ ranking remained relatively unchanged from last week (they actually moved up three spots from No. 14 to No. 11).

The other key NFC matchup this week features the Philadelphia Eagles visiting the Green Bay Packers. While the Cardinals and the Lions occupy the top seeds by virtue of win-loss records, both the Packers and the Eagles top them in our market-based power rankings. Going into Week 11, both teams have nearly identical probabilities of getting a first-round bye. The Eagles are a game up on the Packers, but the market clearly views the Packers as the superior team, with Green Bay favored by 6 points at home.

And finally, there’s the game between the Seattle Seahawks and the Kansas City Chiefs, which will affect the playoff outlook of 20 NFL teams across both conferences. Allegiances break down as one would expect, with NFC teams hoping for a Chiefs victory and the AFC rooting for the Seahawks.

Here are the team rankings based on point spreads. Generic Points Favored is what one would expect a team to be favored by against a league-average opponent on a neutral field. 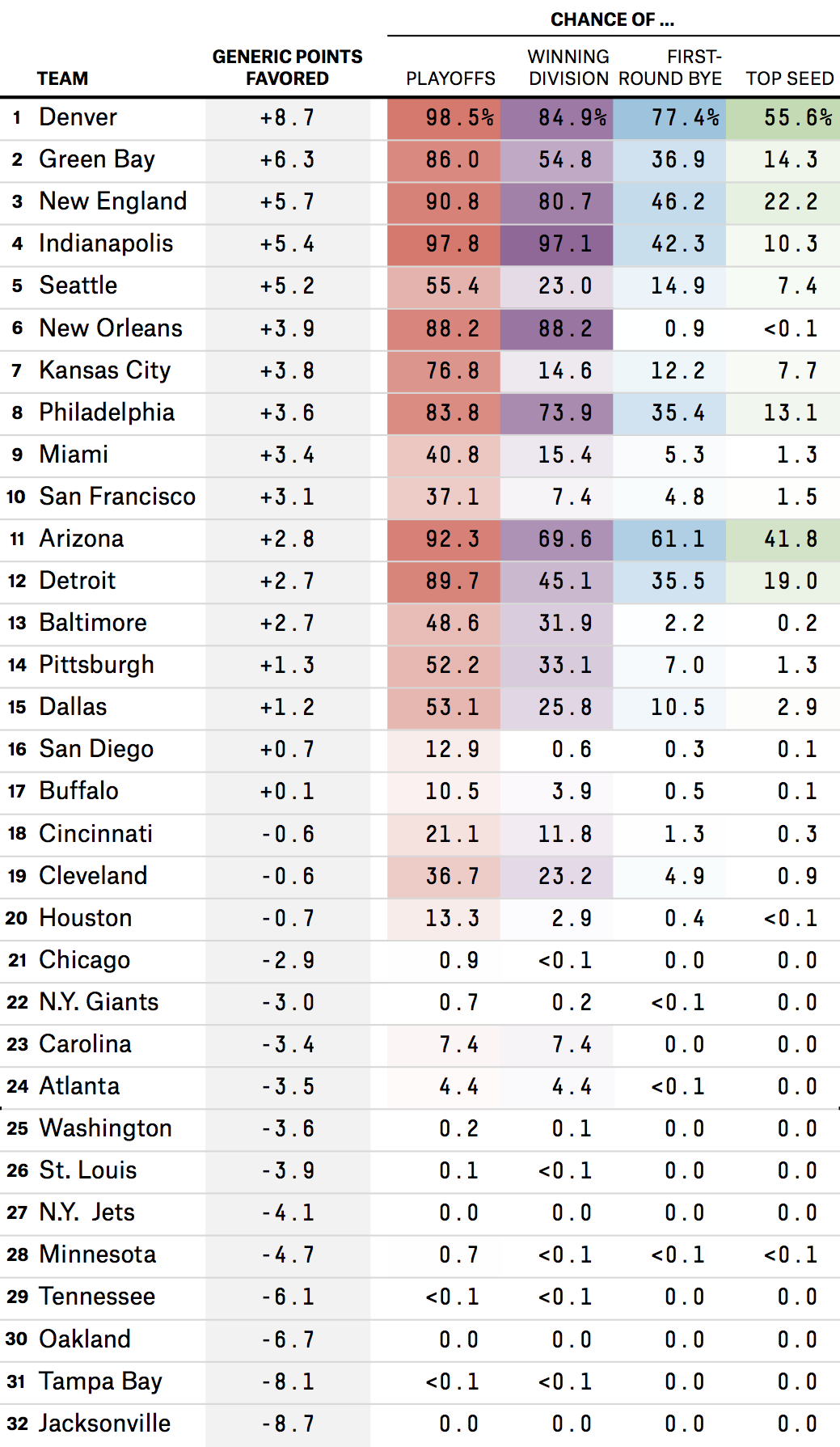