UPDATE (Nov. 21, 12:24 p.m.): The interactive tables above have been updated to include the result of Thursday night’s Oakland Raiders vs. Kansas City Chiefs match-up, and that game has been removed (the text of the article has not been updated).

After an upset-filled Week 11, the NFL playoff picture has shifted, but the outlook is as murky as ever. The Atlanta Falcons, at 4-6, were among the week’s winners, and have somehow found themselves atop the NFC South after a victory over the Carolina Panthers and a rare home loss by the New Orleans Saints. The Houston Texans — after their win over the Cleveland Browns and the Indianapolis Colts’ Sunday night loss — saw their playoff chances double, to 24 percent.

As for the losers, the Browns in a single week went from first to worst in the AFC North (and the Oakland Raiders, crossed out in the interactive above, became the first team to be mathematically eliminated from playoff contention). The Colts have all but squandered any chance at a first-round bye, having dropped games to current Nos. 1 and 2 seeds the New England Patriots and the Denver Broncos. And the Saints seem determined to keep the race for the NFC South title interesting.

Just two weeks ago, a Saints division title seemed very likely. Now New Orleans has ceded the lead to Atlanta, a team that has yet to win a game outside of the NFC South.1 So, how bad could it get in the division? How about an NFC South victor with only five regular-season wins? It’s a mathematical possibility, although remote. Of the 50,000 simulations that form the basis for this weekly feature, nine resulted in the Panthers finishing 5-10-1 and atop the NFC South (granted, that’s just a probability of 0.02 percent). And there is about a 1-in-5 chance the division winner will finish with a losing record.

Last week, we introduced the use of Gini coefficients to measure playoff uncertainty, specifically the uncertainty of each divisional race. Traditionally used to measure income inequality, Gini coefficients quantify how equally a resource (e.g. playoff probabilities) is distributed. We can also extend this approach to each conference’s overall playoff race.2 As the regular-season progresses, one would expect the conference Gini coefficient to increase as teams begin to drop out of playoff contention — the have-nots ceding their wealth to the haves. By season’s end, the coefficient will reach its maximum value of two-thirds, corresponding to the six playoff berths being shared equally among six of the 16 teams in each conference. 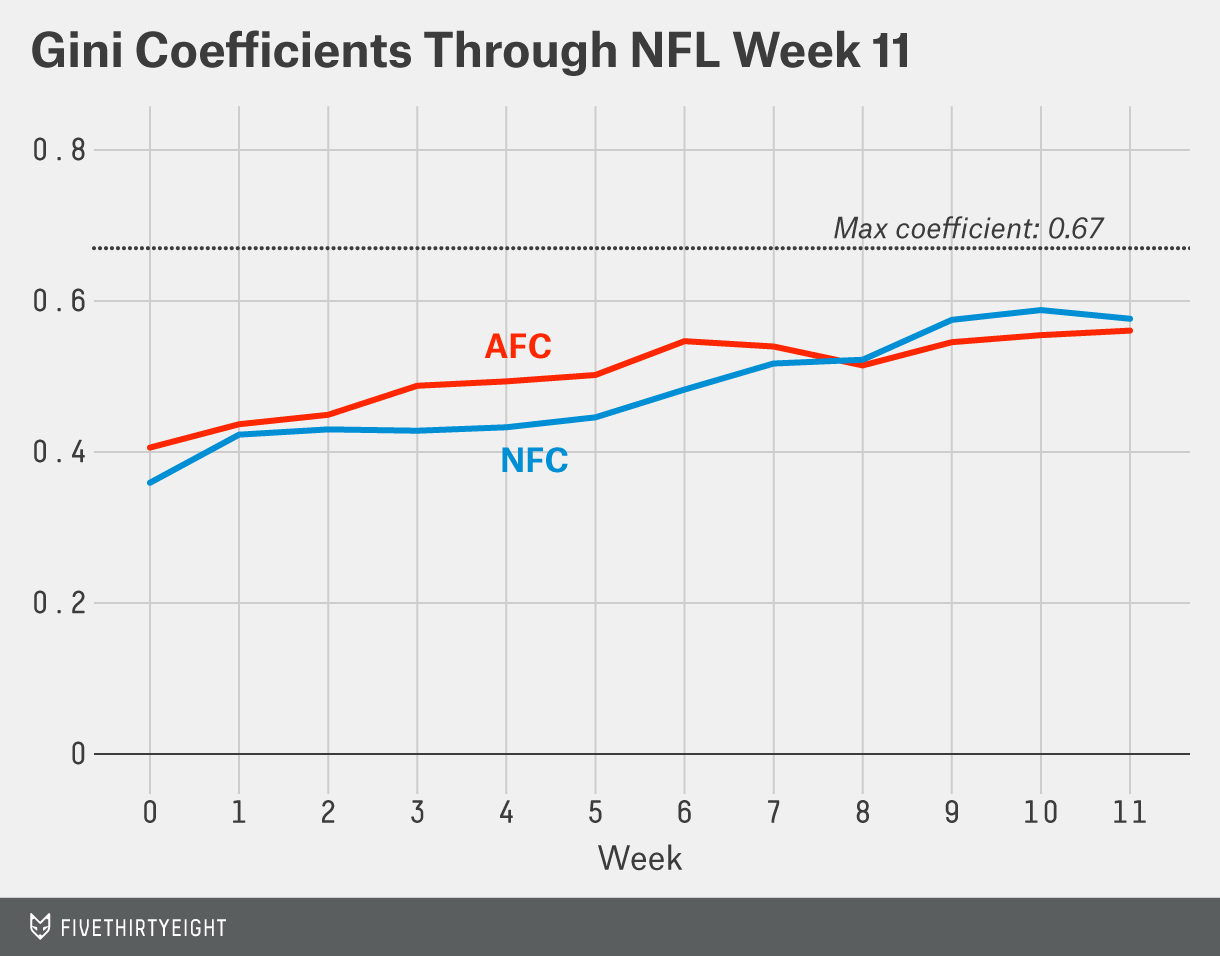 Looking ahead to Week 12, the game with the highest amount of “swing” features the Baltimore Ravens, who are traveling to the Superdome to play the Saints. A total of 87 percentage points of playoff probability is at stake, spread among 15 teams. 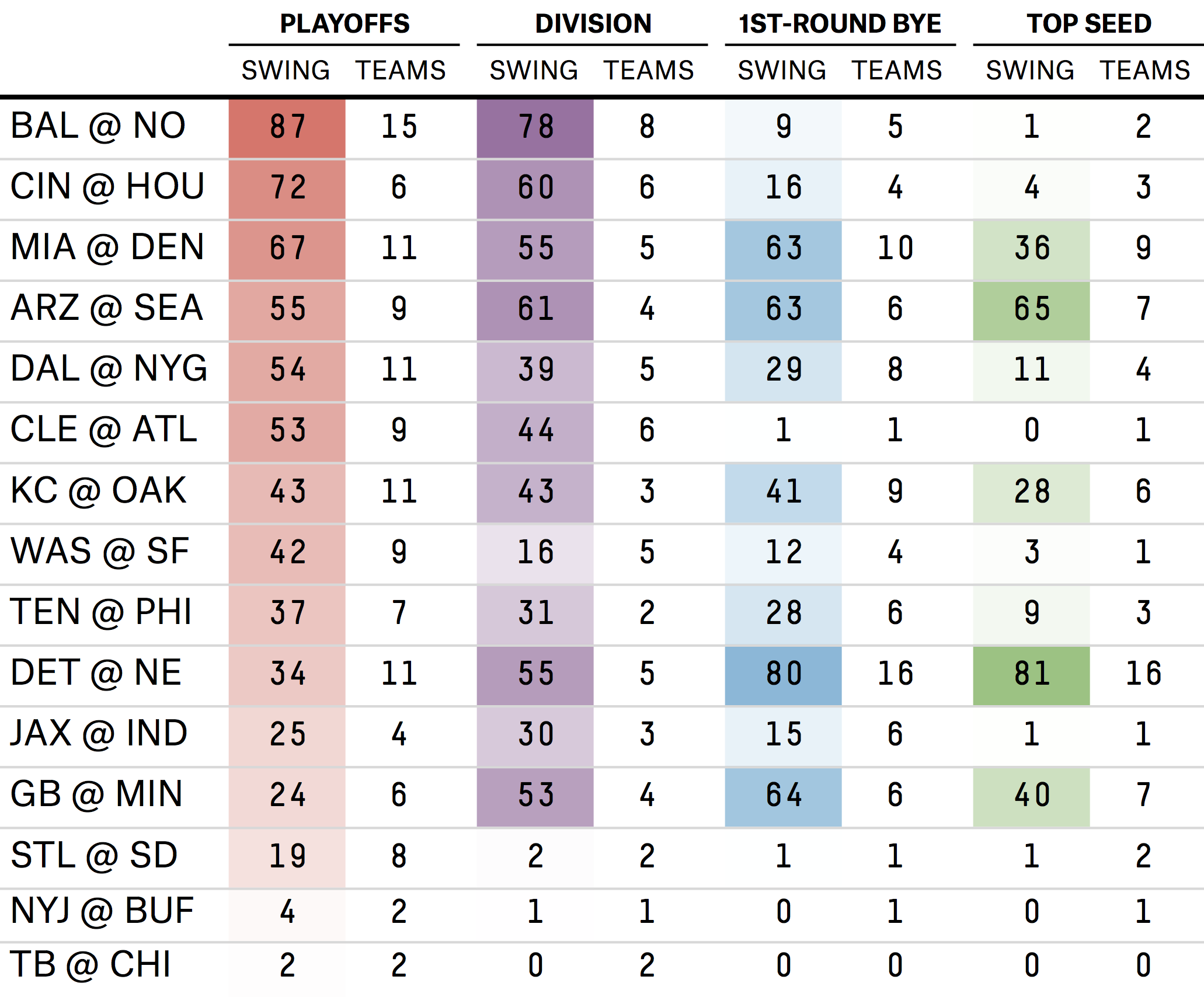 The matchup between the Miami Dolphins and Broncos results in some conflicting allegiances for two teams in the AFC West. A Broncos victory would help the San Diego Chargers’ and Kansas City Chiefs’ playoff hopes, because both teams are competing with Miami for the two AFC wild card berths. But a Broncos victory would also hurt those teams’ chances of winning the AFC West title. I would imagine a Chiefs fan would prefer to aim high and root for the Broncos to lose. Chargers fans should probably be more pragmatic. An AFC West title is highly unlikely, making a Dolphins loss the more attractive outcome for San Diego’s slim playoff hopes.

The most compelling divisional matchup takes place Sunday afternoon, when the Arizona Cardinals visit the Seattle Seahawks. The Cardinals, despite their NFL-best 9-1 record, have rarely cracked the top 10 in the betting market-based rankings used for this feature (see below). They are seven-point underdogs to the Seahawks, a team Arizona leads by three games in the standings. A win by the Cardinals would give them a 94 percent chance of winning the NFC West title — an outcome that was almost unthinkable at the outset of this season. Back then, most would have assumed a dogfight between the Seahawks and the San Francisco 49ers. 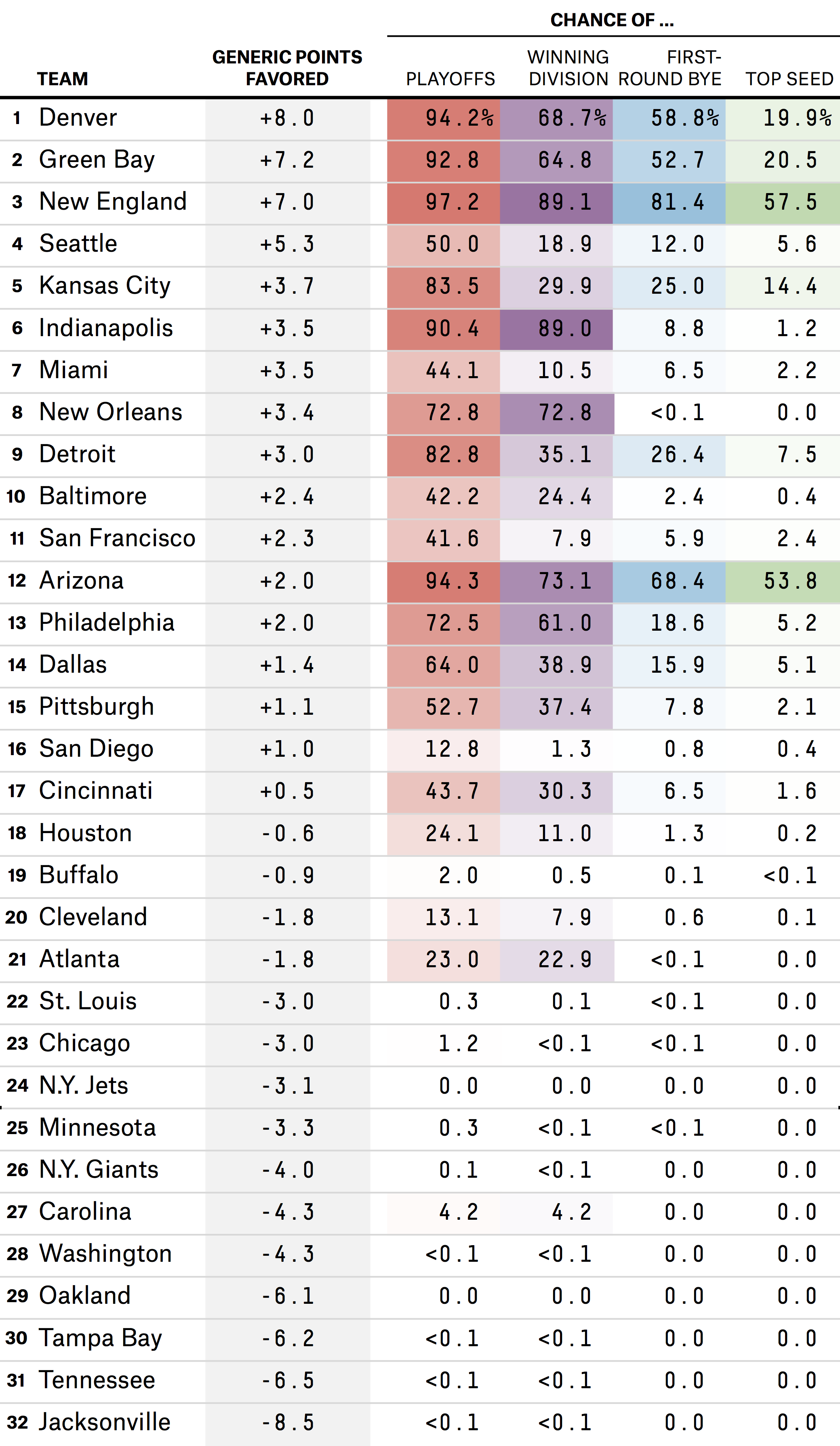