Gov. Scott Walker of Wisconsin has a realistic shot at becoming the most conservative Republican nominee for president in a generation. Walker, who used a campaign video and a tweet to announce Monday morning that he is an official candidate, has been leading in Iowa polls since late January and has been consistently in the top tier in national and New Hampshire surveys. At FiveThirtyEight, we’ve had him in the top tier, with about a 25 percent chance to win the nomination, since February.

The question now is whether the Republican Party, which nominated unsuccessful moderate candidates in 2008 and 2012, will decide that 2016 is the year for a conservative.

Walker’s relatively high polling numbers so far have been built on his standing with conservative voters. They have given him the lead in Iowa, which for him is probably a must-win state. The most recent Quinnipiac poll there, for instance, has his favorable rating at 77 percent among very conservative Republicans, compared with just a 3 percent unfavorable rating. No other candidate is doing as well among this subgroup.

Walker has been so successful with the conservative base because of his actions as governor. He is best known for signing legislation in 2011 that limited the bargaining power of Wisconsin’s public-sector unions, which prompted a labor-led recall attempt in 2012. Walker won that vote and was re-elected in 2014. He also led the state’s rejection of Medicaid expansion under Obamacare — Wisconsin was the second-most-liberal state (based on presidential election results) to say no — and he helped pass a strict voter identification law and cut taxes.

Walker has doubled down on that conservatism during his presidential bid. He is about to sign a ban on abortions after 20 weeks, called for a constitutional amendment to allow states to ban same-sex marriage after the Supreme Court’s ruling legalizing it, and has withdrawn his earlier support for comprehensive immigration reform. Both of Walker’s most plausible rivals for the Republican nomination (Jeb Bush and Marco Rubio) did not call for a constitutional amendment on same-sex marriage and are in favor of immigration reform.

Voters seem to be noticing Walker’s conservative stances compared with the other candidates. Although our three-pronged ideological ratings — which look at congressional voting records (not applicable to Walker), donors and public statements — place Walker’s ideology near the middle of the pack, voters describe him as more conservative than most of the other Republicans. In an average of four YouGov surveys during June, in which 0 was the most liberal and 100 the most conservative, Walker was rated on average as a 70. Bush scored a 60, Rubio a 64.

In fact, Walker’s score is 7 points more conservative than the average Republican candidate (63). To give you an idea of how big a difference that is, the difference between Hillary Clinton and Bernie Sanders was only 2 points (25 vs. 23) during the same period. Walker’s score places him among candidates that most would generally regard as too bombastic or far-right to win the nomination, such as Ted Cruz, 2008 runner-up Mike Huckabee and 2012 runner-up Rick Santorum. Pat Buchanan, the last standing conservative alternative in 1996, scored a 73 in primary polls.1

Walker’s score clearly places him to the right of the Republican Party’s most recent nominees. The last three nominees without an incumbent Republican running were seen as relatively moderate in primary polls. On the same 0 to 100 scale that gave Buchanan a 73, George W. Bush scored an average 63 during the 2000 primary season, John McCain earned a 60 for 2008 and Mitt Romney took a 63 for 2012. (Bush’s score may seem to be at odds with his later record, but keep in mind that he was running as a compassionate reform conservative, just as his brother Jeb is doing now.)

Evidence from past primaries indicates that parties nominate candidates seen as more moderate the longer they have been out of office, because they want to win. Walker would clearly be a step in the opposite direction, and anyone who knows Republican primary voters understands that they would walk over hot coals while listening to a singing album from Eddie Murphy before they would allow Clinton to become president.

That doesn’t mean Walker couldn’t win the nomination, however. Bob Dole in 1996 and George H.W. Bush in 1988 each got a 67. Perhaps most importantly, Ronald Reagan was seen as very conservative in 1980 with a score of 76, and by the general election was considered the third-most-extreme non-incumbent nominee (barely behind George McGovern and Barry Goldwater) since World War II. 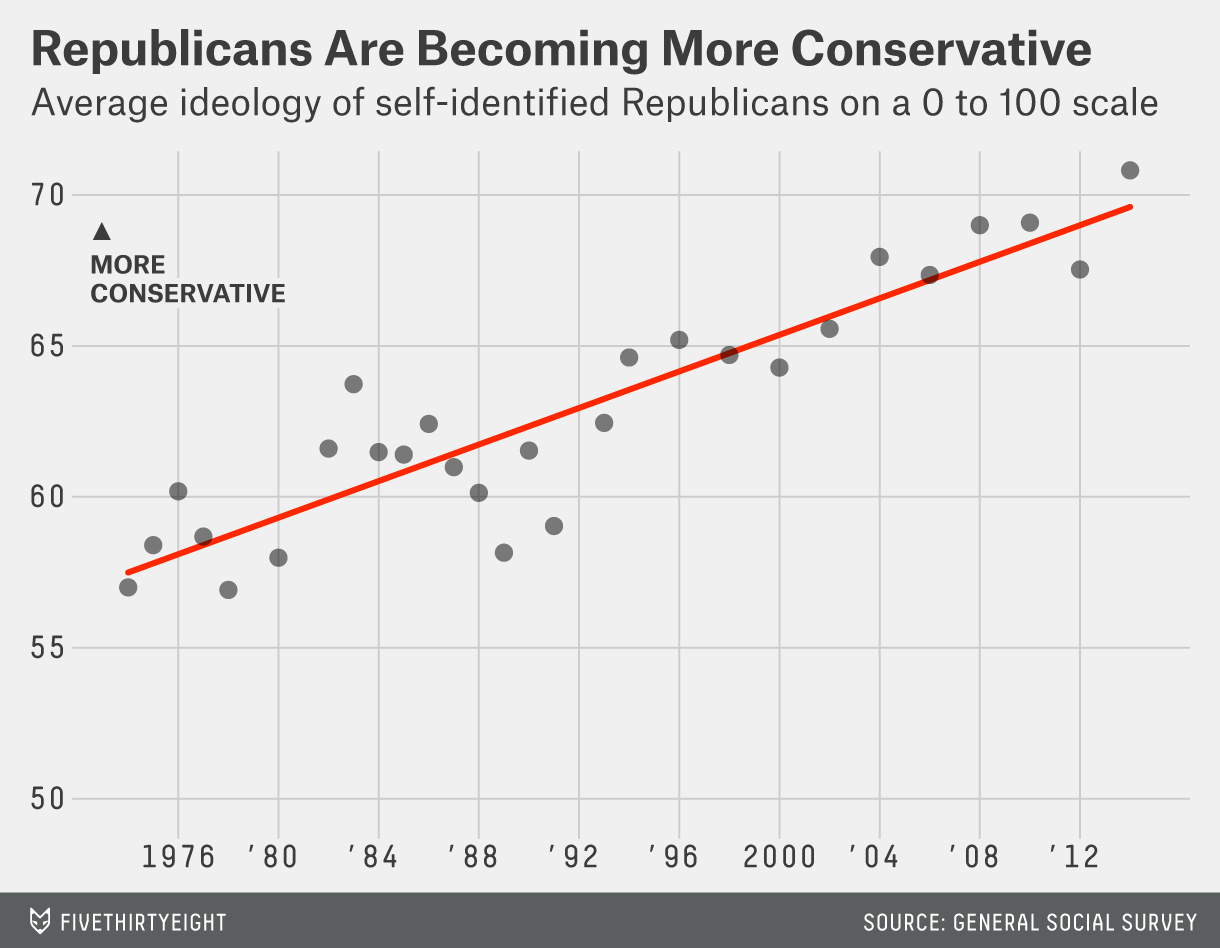 So why did the party nominate more moderate candidates in 2008 and especially 2012, even as the party has become more conservative? We can’t be sure, of course, but electability probably has a lot to do with it. The most successful conservative challengers who emerged in recent years were probably seen as unelectable by party actors and voters. Huckabee and Santorum have made numerous inflammatory comments and had either never won in a swing or blue state or gotten trounced the last time they ran in one.

Meanwhile, other potential conservative alternatives (see Fred Thompson, Tim Pawlenty and even Rick Perry) who could have made a serious run for the nomination went nowhere because they flopped on the campaign trail. Walker could end up in this group, given that his campaign so far hasn’t been regarded as very strong, though it’s far too early to know whether he’ll ramp it up once he’s officially in the race.

Walker doesn’t have the electability problem of a Buchanan, a Huckabee or a Santorum. Like Reagan, Walker was actually elected governor of a swing state4 more than once. Walker was re-elected in 2014 even as almost all the voters saw him as conservative or very conservative. On our 0-to-100 ideological scale, he scored a 75 among likely Wisconsin voters in the final October 2014 Marquette University Law School poll. That gives him a talking point that recent conservative challengers didn’t have.

But the question remains whether Republican primary voters, weighing the chances in the general election, will balk at someone as conservative as Walker. Republican voters have plenty of other candidates to choose from who are more moderate and match up with the ideology of the last few nominees. Walker is clearly betting that the more conservative Republican Party of today will help him defy recent history. If he pulls it off, he’ll be the most conservative Republican to be nominated since Reagan in 1980.