What on earth should we make of Mike Huckabee’s 2016 candidacy. He’s announcing Tuesday that he’s running for president — we know that much. And the polling says he is a legit contender for the Republican nomination. Yet there’s evidence that the fatal flaw of his 2008 run — namely, an inability to widen his appeal beyond born-again and evangelical Christians — hasn’t gone away.

So we’re left with a “on the one hand … on the other hand” situation. I tend to think the argument against Huckabee is stronger than the argument in his favor. But let’s go through each, and you can judge for yourself.

Huckabee’s polling fairly well for someone who hasn’t done that much campaigning. He’s basically tied for fifth place with Ted Cruz at 7 percent in national polling. Huckabee is in third place at 9 percent in Iowa, the site of his surprising 2008 caucus victory. Only in New Hampshire, where he got crushed in 2008, does he look like a total long shot — he’s in eighth place with 4 percent.

Huckabee’s strength is more apparent when we take a step back and look at his general popularity. He boasts an astounding +45 percentage point net favorability rating, according to an average of live interview polls conducted so far this year.

That’s higher than every other Republican candidate, including Sen. Marco Rubio and Gov. Scott Walker. Huckabee appears to have a pool of potential supporters beyond what his horse-race numbers suggest.

This potential support also showed up in two polls conducted by CBS News in February and March; by a solid margin, more Republicans said, on average, they would consider supporting Huckabee than said they wouldn’t. 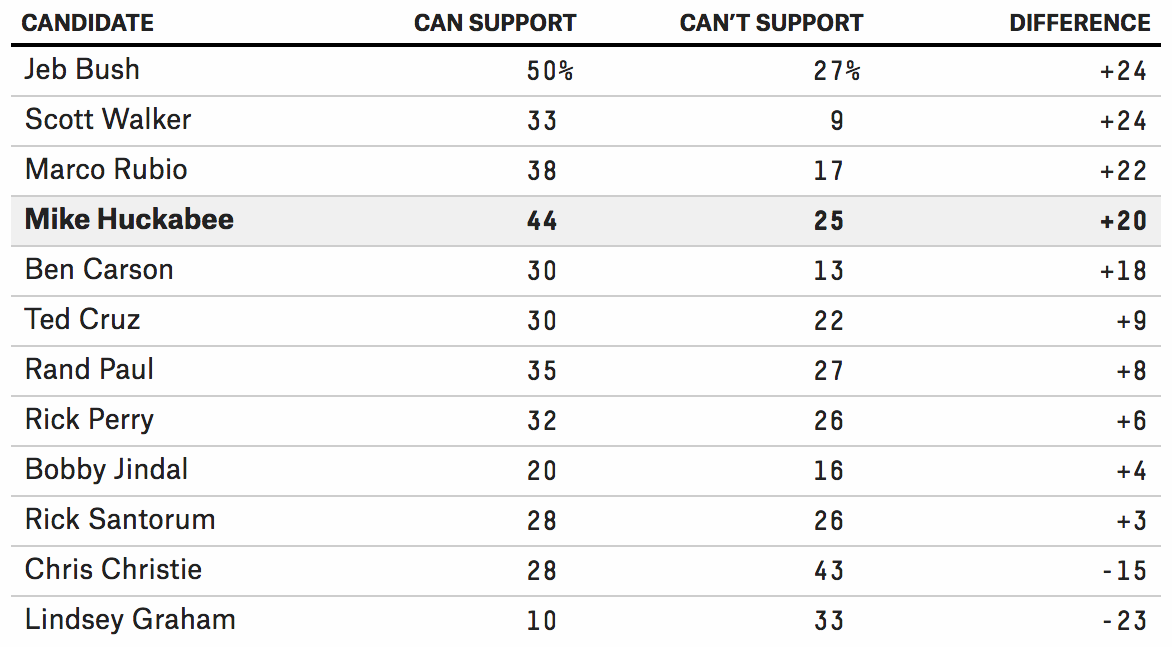 Huckabee also lacks, at first glance, the ideological problems of someone like Jeb Bush. On our combined ideological scale, which uses congressional voting record (not applicable to Huckabee), fundraising and public statements, Huckabee is in the middle of the Republican pack. 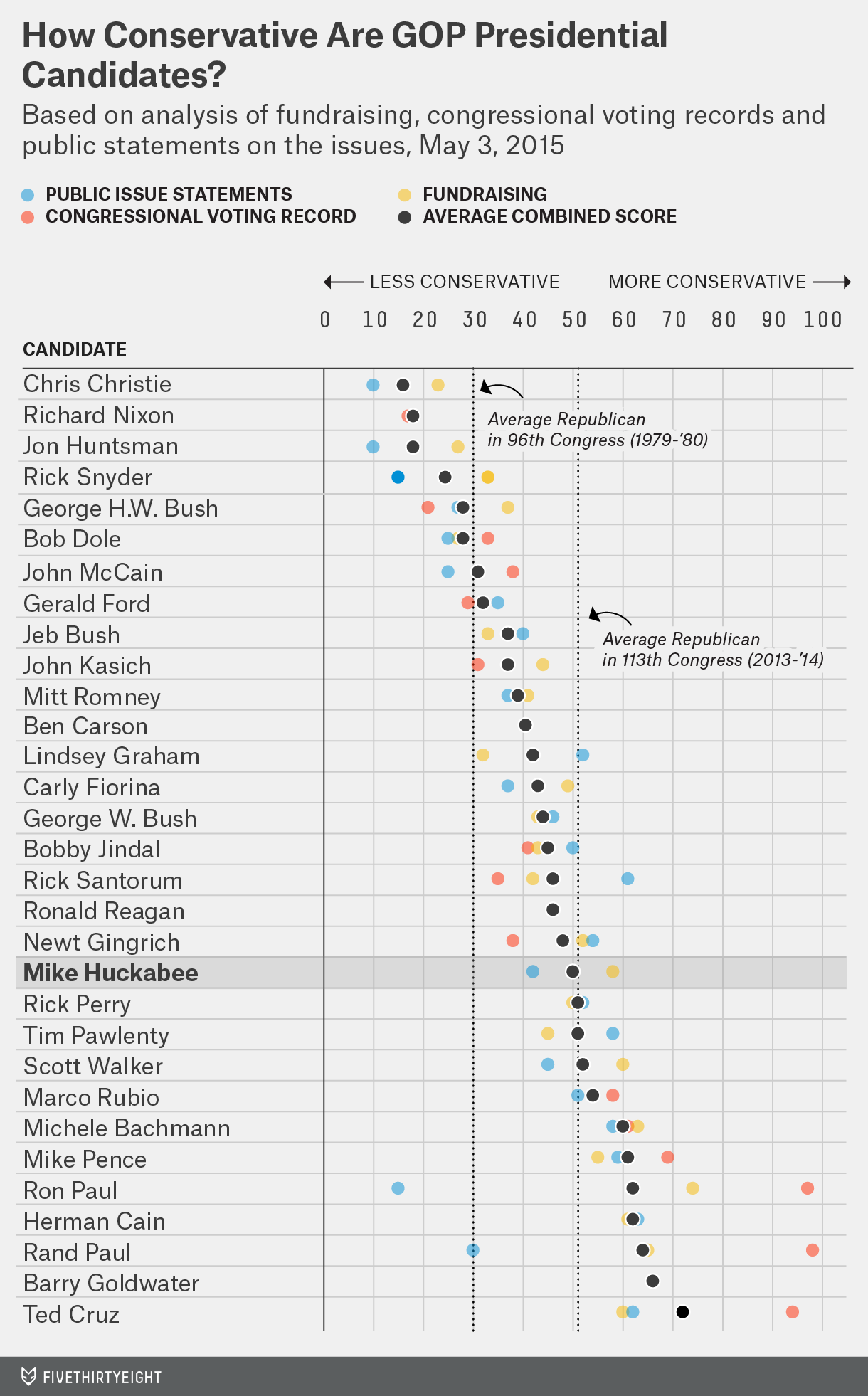 Looking at the polling and Huckabee’s overall ideology, it’s not really hard to see how Huckabee could break out in a divided 2016 field in which the leading candidates are getting only about 15 percent of the vote. In addition to his 2008 win in Iowa, he came in second place to Sen. John McCain nationally in terms of delegates. All he needs to do is convert all that potential support, and presto! He has something.

But here’s Huckabee’s problem: He’s just re-entering the political fray. Huckabee’s image within the GOP has benefited from years as a host for Fox News, the most trusted news channel for Republicans. Once Huckabee jumps back into the rough-and-tumble of the campaign, GOP voters may be reminded of his less desirable positions, and his popularity may plummet. (Hillary Clinton saw her sky-high popularity erode once she left the nonpartisan confines of Foggy Bottom.)

Even though Huckabee’s overall ideology rating places him firmly in the Republican mainstream, he has major problems with economic conservatives. He called for raising taxes numerous times as governor — the Cato Institute gave him a lifetime D grade (compared to Bush’s B). And the Club for Growth, which went after Huckabee hard during the 2008 campaign, has threatened to air ads pointing out Huckabee’s transgressions on taxes.

To win in 2016, Huckabee would need to convince economic conservatives that he’s seen the light. Will he? I seriously doubt it. In his opening campaign ad, he came out strongly for protecting Medicare and Social Security, even as the relatively moderate Bush has called for raising the retirement age for Social Security. In fact, Huckabee has actually shifted left on the issue since 2008. Huckabee’s position may be a winner in a general election, but it’s not the way to win over skeptical Republican party actors in a primary.

If he can’t win over country-club Republicans, Huckabee may be limited to a base of Southern conservatives, just as he was in 2008. He won 20 percent or more of the vote in just seven non-Southern or border states: Alaska, Iowa, Maryland, Ohio, Rhode Island, Washington and Wisconsin. Alaska and Iowa were low-turnout caucuses, and the other states listed all held caucuses or primaries after Mitt Romney bowed out of the race, which left Huckabee as McCain’s only serious competitor. Even including the contests held after Romney left the race, Huckabee won 20 percent or more in states that hold just 37 percent of the delegates necessary to win the nomination.

There’s no evidence that this has changed. In the most recent ABC News/Washington Post and Quinnipiac University surveys, Huckabee came in third with born-again or evangelical voters, but had little support outside that group. And in both surveys, evangelical voters made up less than 40 percent of the Republican electorate.

Huckabee’s going to have to do a lot better than that among non-evangelicals to have any shot at the 2016 nomination. But it sounds like he’ll continue to play to the evangelical base; in February, he compared gay marriage to a drinking problem.

Huckabee’s lack of appeal among non-evangelicals is a large part of the reason he struggled in New Hampshire in 2008 and will probably do so again in 2016. Born-again and evangelical Christians made up only 22 percent of the New Hampshire Republican primary electorate in 2012. Huckabee doesn’t have to win the Granite State to win the nomination, although he probably needs to be competitive to be seen as viable in future primaries. The sample size is small, but no one (on the Democratic or Republican side) has ever won a presidential nomination in the modern era1 without finishing in the top two or above 25 percent in New Hampshire. Huckabee, as we mentioned above, isn’t anywhere close to that at this point.

Huckabee’s best chance to beat the fundamentals is probably through sheer force of personality. A large part of the reason he did well in 2008 was because of dominant debate performances. There’s no reason to believe that he’s lost his touch, and 2012 seemed to show that doing well in the debates is as important as ever.

Then Huckabee must hope that his strength among evangelicals can propel him out of Iowa. If he can win in Iowa, then perhaps he can take that momentum to win over economic populists in New Hampshire like Pat Buchanan did in 1996. Buchanan only needed 27 percent of the vote to win the Granite State that year, and it is quite conceivable — with such a divided field — that’s all Huckabee would need in 2016.

So let’s say Huckabee puts together a solid showing in New Hampshire; then we move to South Carolina, where Huckabee has already shown he can compete strongly in the state’s deeply religious electorate. He’s on his way to the nomination!

Of course, this is the best-case scenario for Huckabee. From Bush to Ben Carson to Cruz to Rubio to Rick Santorum to Walker, social conservatives will have options in 2016. He’ll be fighting to keep his base together while trying to build his support among less socially conservative Republicans. That’s a tough balancing act. Huckabee’s a serious candidate, but there’s a good chance that he’ll win a sizable chunk of born-again Christian and evangelical voters and fail to make inroads beyond that group.