I feel for Rick Perry. He entered the 2012 presidential race as the last great conservative hope to defeat Mitt Romney, and Perry’s campaign wasn’t just a bust, it was an epic, cringe-inducing bust (as typified by the “oops” moment). And yet, on Thursday, the thrice-elected former governor of the second-most-populous state in the union, Texas, is officially announcing he is running for president again.

Does Perry’s collapse four years ago mean we should write him off now? Or do the lines on Perry’s résumé that made him such an attractive candidate in 2012 still matter? These are new questions — it’s basically unprecedented for a candidate who fell as hard as Perry did to try again.

Perry became the front-runner for the 2012 GOP nomination essentially the moment he put a cowboy-boot-clad toe on the starting line. He led the Republican field with 28 percent in September 2011, according to an average of national polls. But by the time it was all over, he had earned just 0.3 percent of the national vote in caucuses and primaries. In other words, he did about 28 percentage points worse than his pre-voting polling promised.

That was a historic drop. I collected September, October, November and December national polling averages for every candidate since the 1972 cycle in every presidential primary without an incumbent running for re-election. I then compared each monthly average to each candidate’s eventual share of the national popular vote. The idea here is to identify candidates who had a high high in at least one of the several months before actual voting took place (like Perry) but then failed to meet those expectations (like Perry). Here are all the candidates who fell short by at least 10 percentage points:1 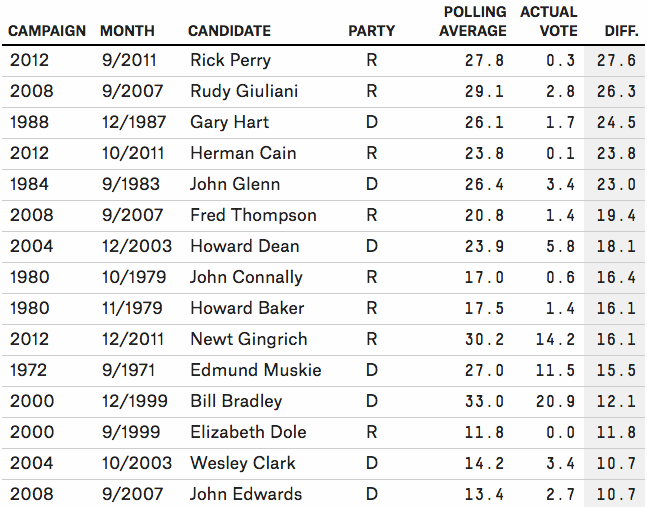 Perry’s collapse beats out the other non-Romneys who had brief star turns during the 2012 GOP primary. It was worse than those of Newt Gingrich (who actually won two primaries) and Herman Cain, who had never won elected office and left the race amid sexual harassment allegations.

Perry’s fall was also worse than other late “here I come on a white horse” entrants, including Democrat Wesley Clark, who had never run for political office, and Republican Fred Thompson, who bored crowds and clearly hadn’t been keeping up with the news after leaving the Senate.

Perhaps most impressively, Perry’s drop somehow beats what I would argue were the most epic declines of all time. I’m talking about Rudy Giuliani, who sat atop GOP primary polls for much of 2007 and then all but disappeared when people actually started casting ballots in 2008; Gary Hart, who dropped out of the 1988 race as the front-runner after his affair with Donna Rice became public and then re-entered the race and found little support; John Glenn, who was well-known as an astronaut, less so as a politician; and Howard Dean, who fell apart in Iowa and did that whole “scream” thing. And who can forget Edmund Muskie, who was famously accused of crying after defending his wife from attacks from the Manchester Union-Leader?

You might notice something about this list of candidates: Not a single one ever ran for president again. In fact, no candidate who averaged 10 percent or more in at least one month from September through December in the year before the primary and ended up with less than 15 percent of the national primary vote has ever run again. Simply put, there have not been second acts for candidates who fall that hard in presidential politics.

Can Perry, who suffered the worst collapse of any of these candidates, possibly come back? Without any perfect precedent, it’s difficult to know. Still, it’s important to keep in mind that candidates aren’t stupid. Unless you’re a vanity candidate or you’re focused solely on affecting the policy debate, you generally run only when you think you have a realistic shot at winning. Apparently, no one who experienced a Perry-like fall felt they had a good enough chance to warrant running again. Maybe they all knew something, or maybe Perry’s different.

Right now, it doesn’t seem like Perry has much of a chance, either. The party establishment doesn’t appear very forgiving. Perry hasn’t received any endorsements from any members of Congress or governors. In 2012, in contrast, he picked up the second-highest number of endorsements of any candidate running. As we’ve discussed previously, a candidate without endorsements is almost always a candidate who isn’t going anywhere.

Republican voters don’t seem to be in a forgiving mood, either. Perry’s ideology places him within the center of his party. He’s a good fit (which was one big reason for his early success in 2012): 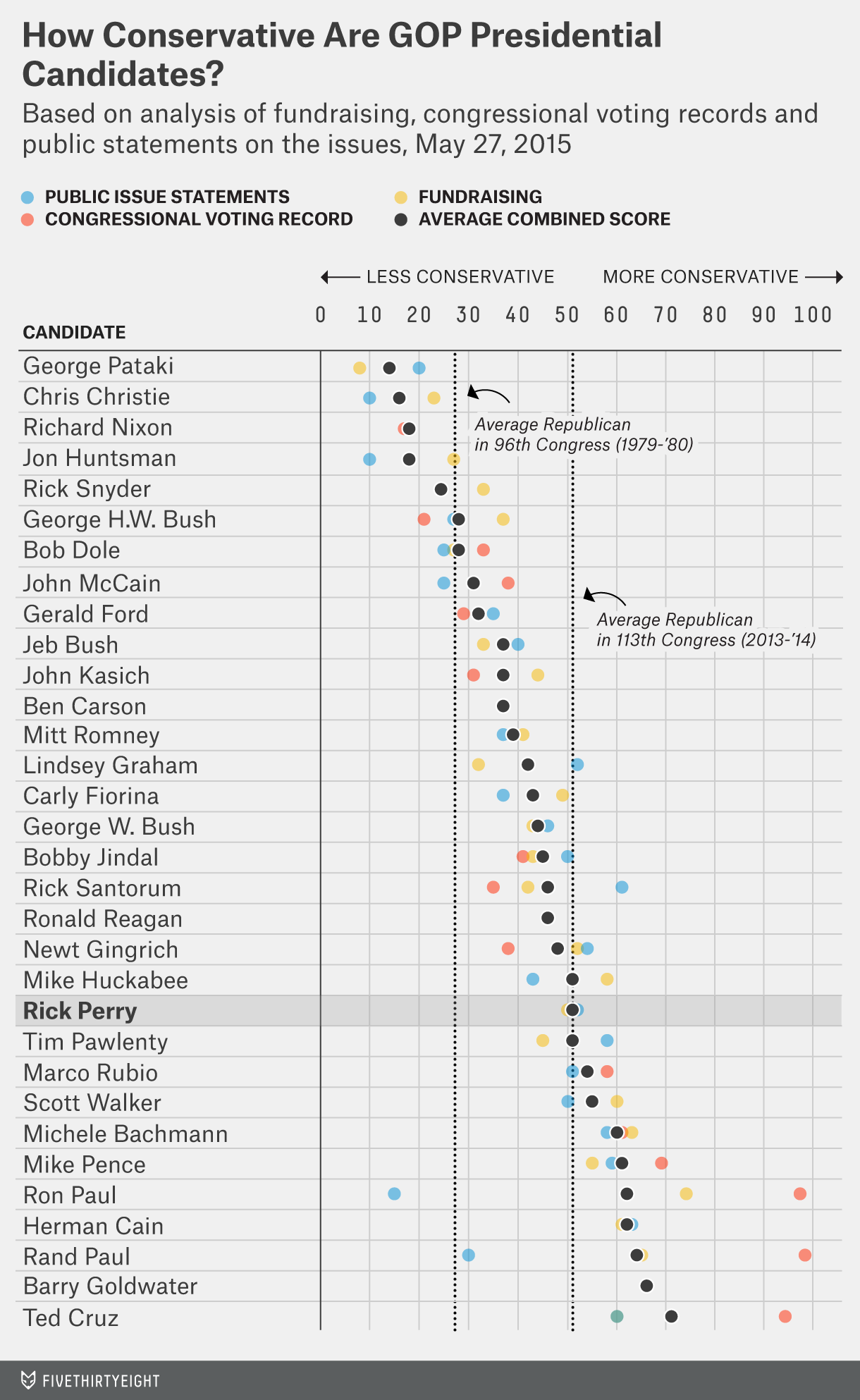 Despite that, Perry is languishing in 10th place at 3 percent in Iowa.2 Same thing in New Hampshire. He’s in ninth place nationally, with 2 percent. In other words, he’s a long ways away from where he was when he entered the race in August 2011. He also managed just a fifth-place showing (8 percent) in Texas, which is far weaker than eventual nominees tend to do in their home states at this point in campaigns.

We’ll have to wait and see what happens. Perry’s 2012 implosion makes his 2016 bid the first of its kind — no one has ever fallen as hard as Perry and run again.