Money isn’t everything, and it certainly isn’t the only thing in presidential campaigns. Still, as former Florida Gov. Jeb Bush officially enters the 2016 presidential campaign today, there’s going to be a lot of talk about whether his super PAC can hit its $100 million fundraising “goal” by the end of the month. You should mostly ignore those stories; money matters, but Bush will clearly have plenty of cash. Pay more attention to whether GOP officials — governors, senators and House members, in particular — are backing Bush.

Late last week, Bush unveiled a raft of endorsements from Florida pols, including 11 of the 17 Republicans in the state’s U.S. House delegation. Normally, home-state endorsements are pro forma, but with a fellow Floridian, Sen. Marco Rubio, in the race, these endorsements are a bit more meaningful.

Bush now has more endorsements, 13, from current House members, governors and senators than anyone else in the 2016 Republican field. He’s also the only candidate besides Sen. Rand Paul to pick up at least two endorsements from members of Congress who are not from his home state.

The endorsement race echoes the polling (Bush leads national polls by a speck and New Hampshire polls by a bit, and is running in the second tier in Iowa): Bush is a weak front-runner.

When we weight these endorsements by position (10 points for each governor, 5 points for each senator and 1 point for each representative), Bush’s 13 points account for 28 percent of all endorsement points so far. That’s OK, but not great. And most Republican bigwigs haven’t made a choice at all. 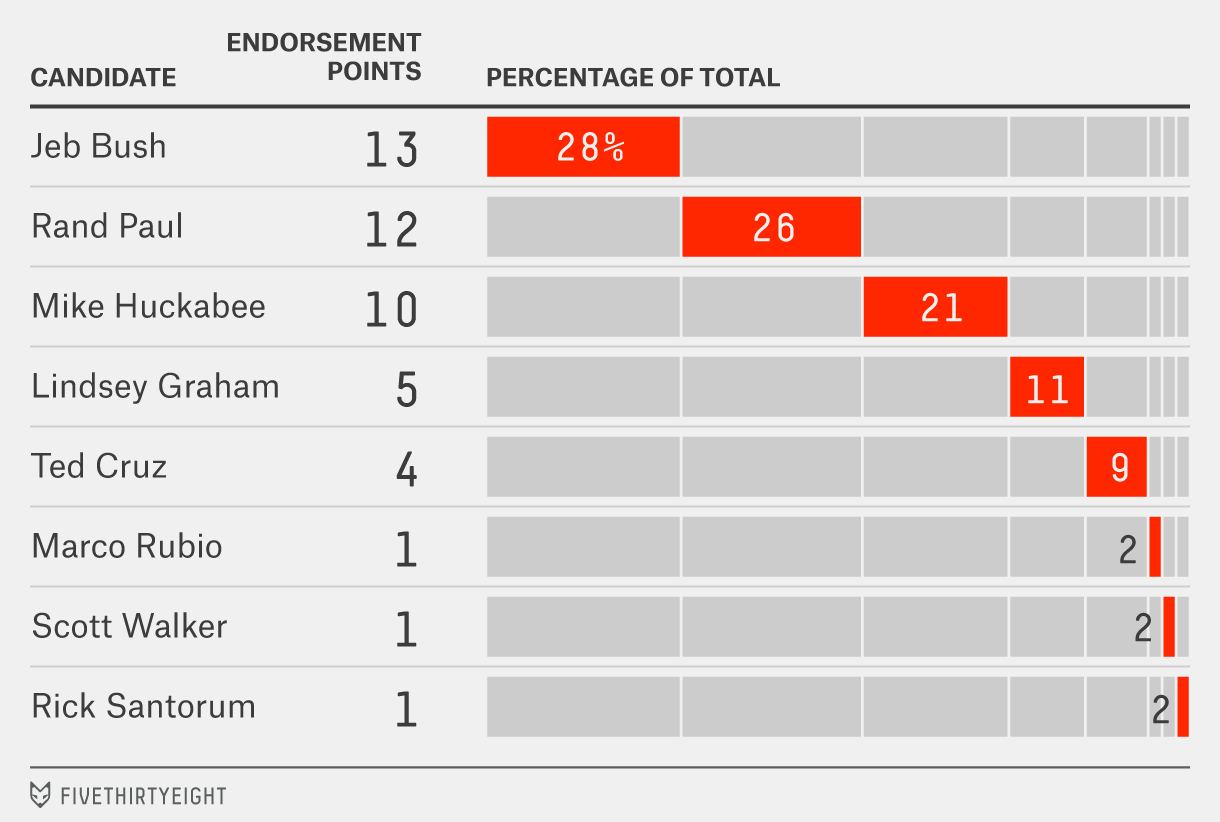 It’s still early, the 2016 GOP field is unusually big and most of the endorsements we do have are from home-state officials. In other words, none of this is determinative. But even early in the process, endorsements are important. Using data from The Party Decides and Eric M. Appleman/Democracy in Action, we can see a clear relationship between early endorsements and the eventual percentage of the national primary vote won by candidates in non-incumbent primaries since 1980.1 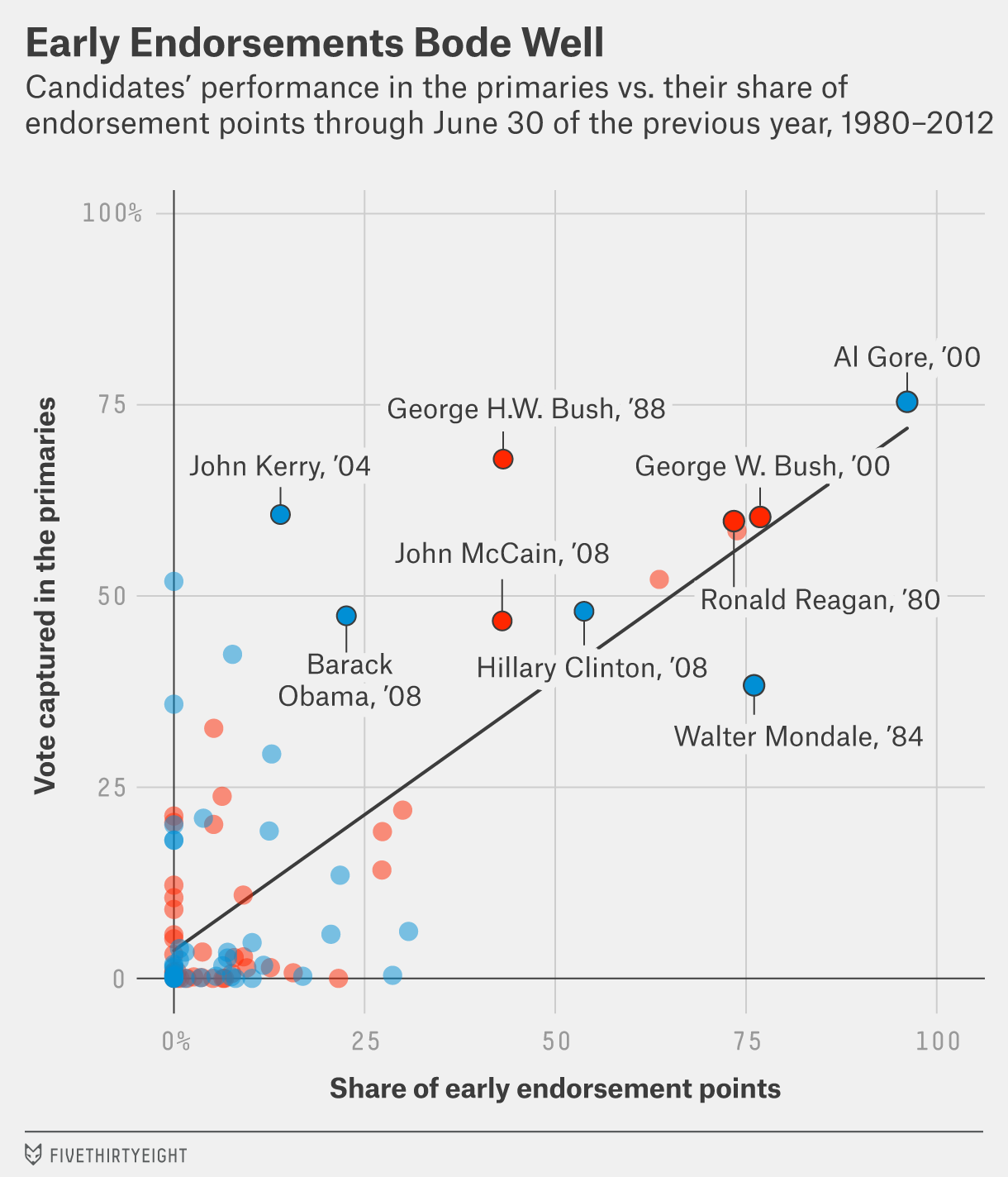 When candidates hold large leads in the endorsement primary, they go on to win the nomination. Bush’s problem is that he doesn’t hold a large lead. Thirteen points and 28 percent of the endorsement pie aren’t that impressive. Here are the early endorsement leaders in primary campaigns since 1980: 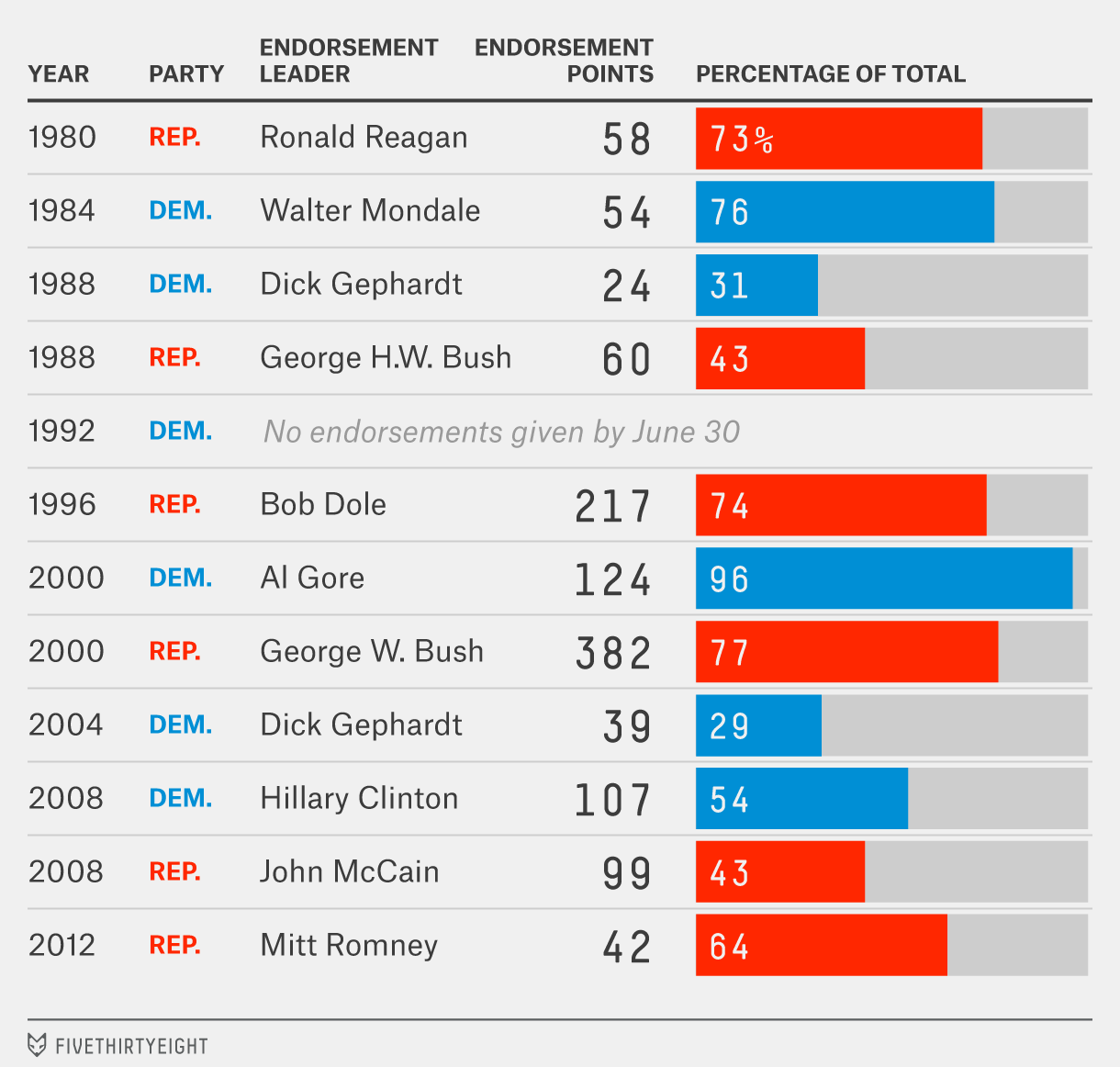 Instead, the closest comparison to the 2016 GOP endorsement race may be past Democratic free-for-alls. In the 1988 contest, Dick Gephardt won a lot of House endorsements because he was chairing the House Democratic Caucus but didn’t fare all that well after voting began. Gephardt had the same problem when he ran in the 2004 race after serving as minority leader in the House.

In 1988 and 2004, very few early endorsements were given out, and those that were were split fairly evenly among the candidates. Potential endorsers were keeping their options open. The same seems true for Republicans in 2016. Bush hasn’t wrapped up anything.

But what about all that money that Bush’s super PAC is gobbling up?2 We’ve had just a few elections — and just one presidential election — since the U.S. Supreme Court’s Citizens United decision and the explosion of noncampaign spending. Analyses of presidential elections are plagued by small sample sizes. That is triply true for studies of post-Citizens United elections, making it hard to judge the effects of all that outside spending. But if you were trying to explain the eventual vote won by primary candidates using endorsements and campaign fundraising since 1980, you’d give the endorsement percentage earned roughly 2.5 times the weight of money raised.3 In other words, money tells us something. Endorsements tell us more.

In GOP races, campaign fundraising hasn’t been very predictive at all (check out GitHub for the endorsement and fundraising data used in this piece). Phil Crane in the 1980 race, Pat Robertson in 1988, Phil Gramm in 1996 and Rudy Giuliani in 2008 had each taken in nearly a third of all the money raised up to this point in the Republican race, not counting self-funding.4 Crane and Giuliani actually led their fields in fundraising. All these candidates went nowhere. In those years, though, there were clear leaders in the endorsement race, and Crane, Robertson, Gramm and Giuliani had less than a sixth of the weighted endorsements.

To see how money could foretell the result of the 2016 Republican race, we again have to look to previous Democratic nomination fights. Not counting 1992, when more than half of the eventual candidates hadn’t even declared by this point, the last two Democratic fields with the weakest front-runners in the endorsement race were ultimately won by the candidate who had raised the most money through June 30 of the year before the primary. Michael Dukakis had 29 percent of the money raised up to the halfway point of 1987 even as he had just 8 percent of the endorsement points. John Kerry had 22 percent of the money and 14 percent of the endorsements up to this point in 2003. Neither of these were large money leads, though both eventual nominees were ahead.

If Bush were raising money without any support from elected officials, I’d simply dismiss whatever money his super PAC was taking in. But in a race so up for grabs, extra money can only help him.

Of course, it’s not clear whether money raised through a super PAC or other independent groups differs in its predictive power from money raised by a candidate. Super PACs in their current form are too recent a development to know for sure. If money is predictive because donations from a lot of individuals foretell future support, then Bush’s haul this year is less likely to mean something because super PACs raise a lot from a few donors. If early money matters because it says something about organizational strength, then Bush’s super PAC edge could put him over the top.