Fox News and CNN, which are separately sponsoring the first two Republican presidential debates, could be holding the fate of the GOP candidates in their hands. Debates were important in both the 2008 and 2012 Republican primaries. They sank the candidacy of Rick Perry four years ago and gave life to Mike Huckabee’s campaign in the 2008 contest. That’s why there has been so much interest in knowing which of the GOP’s many candidates are likely to make it into these debates.

We have known for a few weeks that Fox News and CNN are going to invite the top 10 candidates based on a national polling average.1 We also have known that CNN is going to have a secondary debate for those candidates who missed the cut but hit at least 1 percent in the polls.

Simple, right? Polling is an objective method for deciding which candidates take the stage. But that’s true only if the debate criteria are made clear ahead of time. As I previously pointed out, the hosts could average polls in different ways and make it so the first debates — on Aug. 6 for Fox News and Sept. 16 for CNN — feature different candidates.

Since my article was published, CNN has provided a coherent averaging methodology. It has a long explainer and answered every follow-up question I had about how it was deciding who was in and who was out.

Fox News, however, has been less forthcoming in statements to FiveThirtyEight and other media outlets about the rules of its debating game. Although it was willing to answer some questions (such as in which states candidates need to pay filing fees to be included in the debate2), Fox News was unwilling to answer others such as which pollsters would be included in its average and how rounding would be handled.

Therefore, we can say with certainty who would be included in the CNN debate were it being held today but can’t say the same for the Fox News debate.

Based on FiveThirtyEight’s understanding of the rules, after what CNN and Fox News have said (to us and other media outlets), these are the averages and the candidates that would be included in the debates at this moment.3 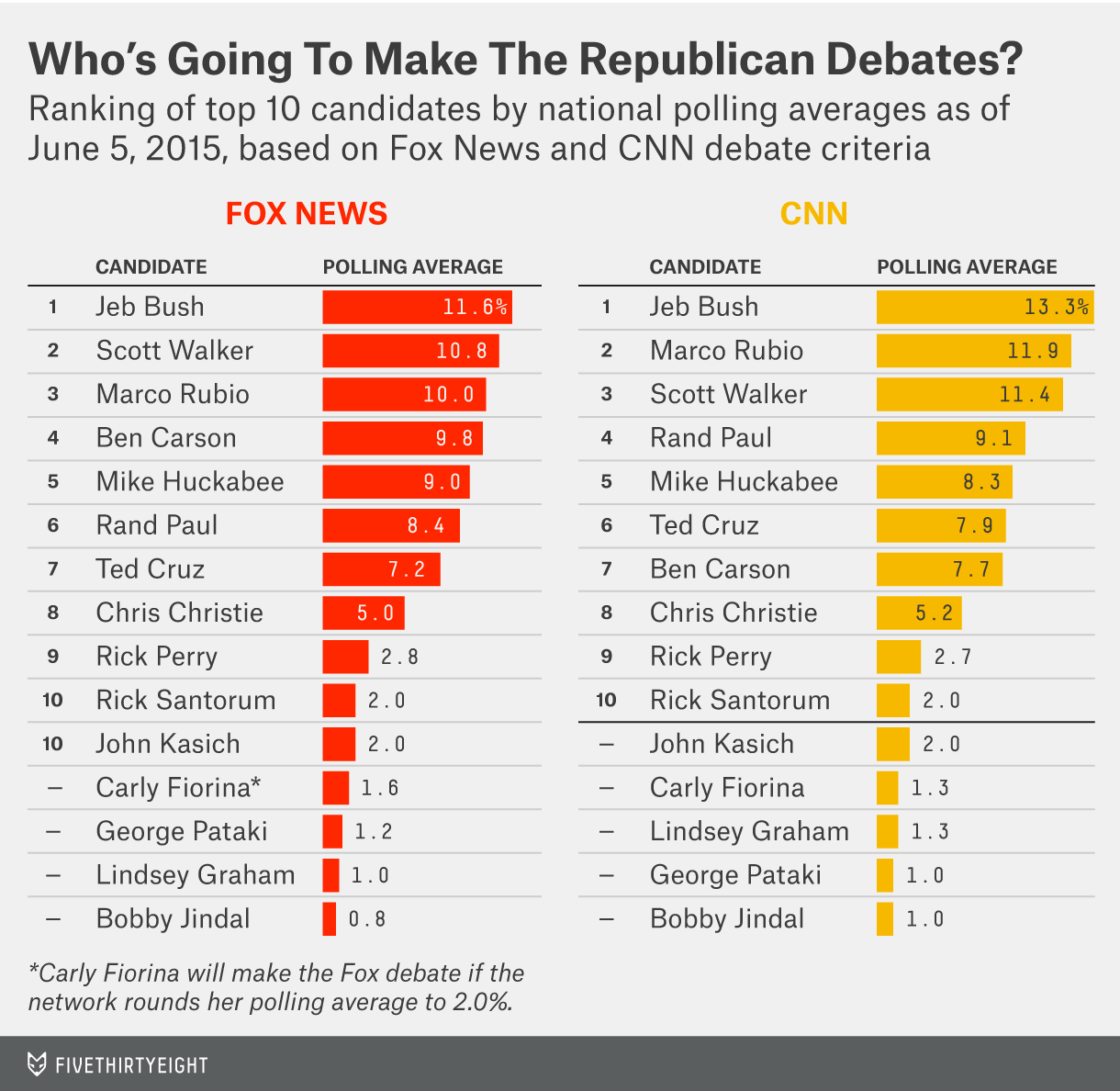 CNN and Fox News would have the same top nine: Jeb Bush, Ben Carson, Chris Christie, Ted Cruz, Mike Huckabee, Rand Paul, Rick Perry, Marco Rubio and Scott Walker. Note that the differences in the polling averages are currently not enough to lead to different top nines for the networks, but they could later.

What about that 10th spot?

Fox News has said that ties could result in more than 10 candidates being included, so John Kasich and Rick Santorum are in the Fox News debate with 2 percent each. Carly Fiorina, however, is a question mark. She’s at 1.6 percent. If Fox News is rounding, Fiorina gets bumped up to 2 percent, and she’s in the debate too.

Fiorina and other candidates who end up in a similar situation have a right to know whether they are in or out. Otherwise, Fox News could make the decision at the last minute and in theory change the rules depending on the candidate teetering on the edge.

The Fox News polling average that I’ve calculated is based on what I know about the network’s rules and assumes that I’m understanding them correctly. Fox News has said that an average of the five most recently conducted national polls by “major, nationally recognized organizations that use standard methodological techniques” as of 5 p.m. two days before the Aug. 6 debate will be included. We take “standard methodological techniques” to mean live-interview polls, although Fox hasn’t made it clear which pollsters it will recognize. Reason-Rupe surveys, for instance, will not be recognized by CNN even if they are live-interview, high-quality polls. Will Fox News include those surveys? It could make all the difference in the world when candidates are separated by fractions of a point.

Nor has Fox News made it clear how it will treat decimal places from individual polls. CNN has said that it will use poll results as they have been released publicly and won’t be rounding individual polls or averages.

Indeed, CNN has been much more explicit about its rules. For its debate, we know that Santorum would make the cut but Kasich wouldn’t — even though they are tied at 2 percent in CNN’s average, too. Why? CNN makes it clear how it is averaging the polls.

CNN’s second tiebreaker is an average of polls released within 56 days of six days before the debate from the early states of Iowa, Nevada, New Hampshire and South Carolina. Using a current 56-day average from those states, Santorum beats Kasich 2.3 percent to 1.5 percent. So Santorum is in.

We also know, thanks to CNN’s release, that Lindsey Graham, Fiorina, Bobby Jindal and George Pataki would be included in the secondary debate. That’s because each has reached at least 1 percent in at least three national polls over the 56-day average period.

One area in which Fox News has matched CNN’s clarity is the time period of polls being used for its average, and the networks’ rules differ. Polls are rarely released on the same day they are conducted. It’s possible that a poll will be finished by Sept. 10, but if it’s not published by then, it won’t be included in the CNN average. Fox News, though, cares about when a poll was conducted, not released. It will count the most recently conducted surveys by 5 p.m. two days before the debate even if they are released before surveys conducted earlier.

That Fox News can get into these details about poll timing suggests that it has thought about this debate. The networks seem to want to put on a debate that is worthy of the presidential stage. Like CNN, Fox News is requiring candidates to be constitutionally eligible to be president and file with the Federal Election Commission. Fox News is also requiring that candidates pay the state filing fee in Ohio. In other words, they want only serious candidates.