Jeb Bush is expected to declare a fundraising total in the “high tens of millions of dollars,” The New York Times reported on Monday. Any talk of record fundraising totals ought to account for inflation — as well as the fact that it’s easier to raise big dollars since the Citizens United decision (most of the contributions to Bush will go to his Super PAC). Nonetheless, Bush’s haul should be an impressive figure.

But money is unlikely to be Bush’s problem in this campaign, and cash may be a less valuable resource than another sort of currency in which he is lacking: the support of influential Republicans, like current senators and governors, especially those who publicly endorse a candidate. Historically, these endorsements have been the best proxy for support in the “invisible primary” and a leading indicator for which candidates may emerge victorious through the rough-and-tumble nomination race.

So far, Bush has won very few endorsements. No current Republican senators or governors have endorsed him, and only five members of the House of Representatives have done so, all from his home state of Florida.

Fortunately for Bush, none of his rivals are doing much better. Rand Paul, with seven endorsements from the House along one from a senator — his Kentucky colleague, Mitch McConnell — is nominally the endorsement leader.1. But the overwhelming majority of Republican officials have stayed on the sidelines, at least publicly.

Isn’t it a little early to worry about the endorsement count? We’re still 265 days away from the projected date of the Iowa Caucus, Jan. 18, 2016.

But in some campaigns in the past, there had been plenty of endorsements at this stage of the cycle. For instance, Jeb Bush’s brother, George W. Bush, had been endorsed by 16 governors, six Senators, and 64 members of the House by the end of April 1999, according to data from the political scientist Marty Cohen. 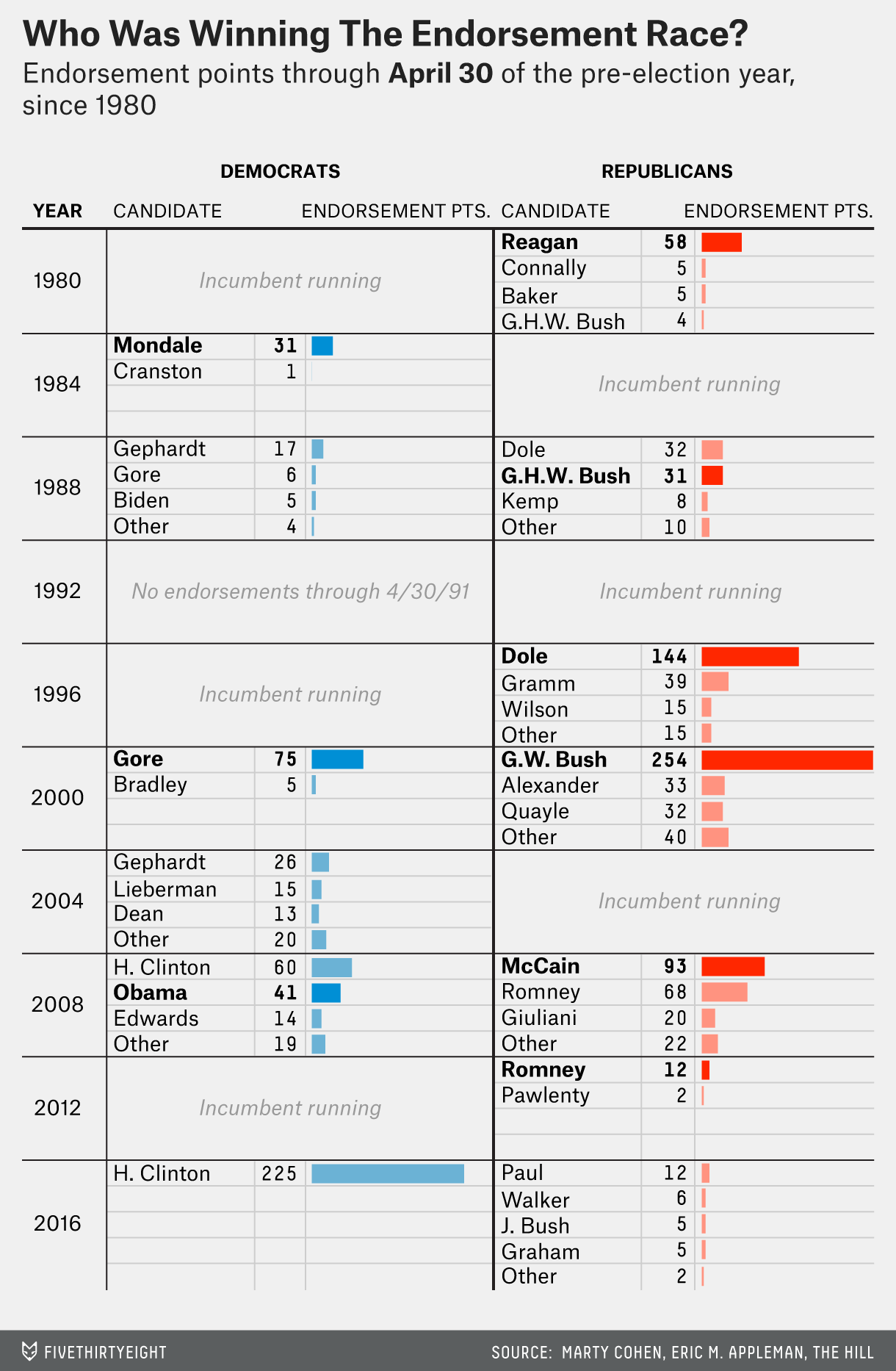 Republicans have a reputation for “falling in line” and consolidating their support behind one or two establishment-backed candidates early in the race. And you can see evidence of that in the chart. The 2000 campaign was the signature example: George W. Bush had accumulated 254 endorsement points through April 30, 1999, far outdistancing Lamar Alexander’s 33 points.

Bob Dole also had a substantial early lead in endorsements in the 1996 campaign, as Ronald Reagan did in 1980, and both won their nominations with comparative ease.

The other Republican races have been tighter. In the 1988 race, there was a virtual tie atop the endorsement scoreboard at this date in the cycle, with Dole at 32 endorsement points and George H.W. Bush at 31. Bush won the nomination.

GOP endorsements came fairly early in the 2008 campaign, but they were spread across several candidates. Still, the early leader in endorsements, John McCain, went on to win the nomination.

Meanwhile, the paltry endorsement total for Rudy Giuliani that year — at a time he was riding high in the polls and raising plenty of money — was an early sign of trouble for his campaign. If influential Republicans decide Jeb Bush is too liberal — that he’s more like Giuliani than Mitt Romney or McCain — he’ll have little shot at the nomination.

The 2012 campaign is a more favorable precedent for Jeb Bush. Few endorsements of any kind had been made through April 30, 2011, although Romney did lead among those who had endorsed and maintained that lead throughout the race.

Are campaigns simply getting off to a later start now? That’s hard to say. There hasn’t been much of a pattern (other than that the Democratic nominations in 1972 and 1992 got off to especially slow starts). The 2012 Republican campaign began relatively late, based on when candidates either officially announced for the race or opened an exploratory commission with the FEC. But with the advent of Super PACs, which allow a candidate to raise money without filing with the FEC, the official announcement date has become less important. And candidates don’t need to officially announce their bids to win press attention: Plenty of news outlets, including FiveThirtyEight, will cover them whether or not they’ve gone through the pretense of declaring their bids officially.

What’s clearer is that this remains a very active Republican campaign. Bush didn’t deter his fellow Floridian, Sen. Marco Rubio, from running. Nor has he intimidated other moderates from considering a bid. Gov. John Kasich of Ohio is thinking about a run, as is Chris Christie of New Jersey. Sen. Lindsey Graham of South Carolina, the sort of establishment Republican whose endorsement Bush might hope for, is instead running for president himself. Gov. Rick Snyder of Michigan, another moderate, is the latest to consider a bid.

Some of these candidates have more realistic hopes of winning the nomination than others. And some will drop out before Iowa (or will never officially declare). But the sheer volume of credible candidates stands in contrast to 2012, when Romney was able to keep candidates like Christie, Mitch Daniels, and Paul Ryan — along with Jeb Bush himself — mostly on the sidelines.

So is Bush losing the invisible primary? Not exactly. Let’s consider a few points in his defense:

But if Bush isn’t losing the invisible primary, he isn’t winning it either. This Republican campaign is not following the trajectory of races like the Republican nominations of 1980, 1996 and 2000, or the Democratic nomination of 2000, where one candidate was a clear invisible primary leader (and went on to easily win his nomination). Furthermore, establishment Republicans have some reasons to prefer candidates like Rubio, Kasich and Gov. Scott Walker of Wisconsin to Bush. Not only are they more conservative — they can make a case for being more “electable” too.