In their book, “The Party Decides: Presidential Nominations Before and After Reform,” the political scientists Marty Cohen, David Karol, Hans Noel and John Zaller find that endorsements — not polls, fund-raising numbers or media hits — are the best early indicators of success in the presidential primaries.

By that standard, Mitt Romney is the front-runner for the Republican nomination, with Rick Perry not far behind, but the other candidates having little chance.

In the book, Mr. Cohen and his co-authors score endorsements from 1 to 10 based on their relative importance. I’m on the road Friday and don’t have a copy of the book handy, but it’s easy enough to come up with a similar scoring system.

We’ll assign 10 points, for instance, to every endorsement made by a Republican governor, 7 points to those made by a senator, and 3 points from a representative of the House. Endorsements by former candidates — Tim Pawlenty and Thaddeus McCotter have both dropped out and endorsed Mr. Romney — also count for 10 points each.

We’ll also assign points to endorsements made in four crucial early nominating states, Iowa, New Hampshire, South Carolina and Florida, as tracked by the Web site Democracy in Action. Endorsements made by state senators will count at 2 points each, and from members of a state House of Representatives at 1 point (except for New Hampshire, which has an exceptionally large House with 400 members; we’ll count those at half a point each.)

Candidates don’t get credit for endorsing themselves. They do get double-credit if an endorser falls into multiple categories, however, like being from one of the four early states: being endorsed by Nikki Haley, for instance, the governor of South Carolina, would be especially valuable (she hasn’t picked a candidate yet).

A table of the relevant endorsements follows below. 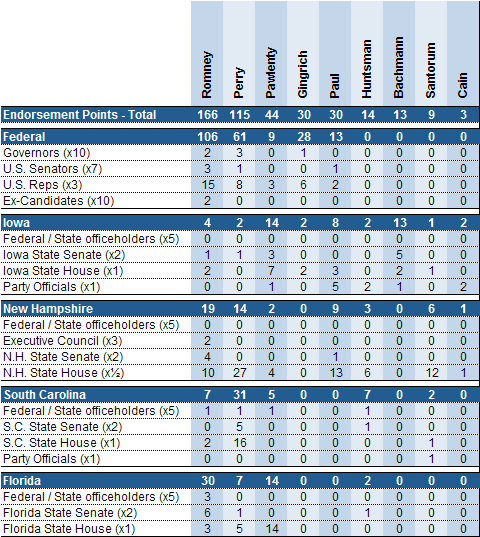 Mr. Romney leads with a total of 166 endorsement points so far, as compared with 115 for Mr. Perry.

Most of Mr. Romney’s edge comes on the federal level, where he has the endorsements of three United States senators (as compared with one for Mr. Perry), 15 House representatives (eight for Mr. Perry) and two former candidates (none yet for Mr. Perry).

Mr. Perry has a slight edge in endorsements from governors so far. Bobby Jindal of Louisiana, Brian Sandoval of Nevada and Sam Brownback of Kansas have endorsed his campaign. C.L. Otter of Idaho and Dave Heineman of Nebraska have endorsed Mr. Romney.

At the state level, Mr. Perry is doing very well in South Carolina, where he has 31 endorsement points — more than all the other candidates combined. But Mr. Romney has a fairly large edge in Florida and a smaller one in New Hampshire.

Neither candidate has made much headway in Iowa. Instead, Mr. Pawlenty still leads in endorsement points there, despite having dropped out last month, followed closely by Michele Bachmann and Ron Paul.

In some ways, these numbers ought to be reasonably encouraging for Mr. Perry. He isn’t far behind Mr. Romney on the endorsement scoreboard, despite having entered the race several months later.

The question is whether the endorsements will continue to come in as Mr. Perry faces skepticism about his performance in debates. If we see a slew of endorsements for Mr. Romney over the next two to three weeks, but few for Mr. Perry, that will be a tangible sign that Mr. Perry’s campaign is in some trouble despite his lead in most national polls.

Both candidates are in an enviable position as compared with the rest of the Republican field, however.

The candidate placing third in endorsement points is Mr. Pawlenty. Newt Gingrich and Ron Paul are tied for fourth, but have just a fraction of the endorsements secured by Mr. Romney and Mr. Perry.

And the two candidates who are doing especially poorly by this measure are Michele Bachmann and Jon M. Huntsman Jr. Mrs. Bachmann is doing reasonably well in Iowa, but has essentially no endorsements outside the state — a sign of the limited appeal of her campaign.

Mr. Huntsman’s message, which has emphasized electability but also critiqued the direction of the Republican Party, has not gone over well with Republican office-holders: he has just 14 endorsement points, less than one-10th of Mr. Romney.

One thing this chart does not do a good job of reflecting is all the endorsers who have remained on the sidelines: the vast majority of influential Republicans have withheld their endorsements so far. That means there could still be a groundswell of support behind one of the candidates. But Mr. Romney, and Mr. Perry, have a clear lead so far.