Let’s do something a little unusual. Instead of going through all the reasons that Hillary Clinton is so likely to win the Democratic nomination (and she is) and then tucking a caveat-laden paragraph at the bottom of this article, let’s start with one big caveat:

Presidential elections aren’t baseball. They take place just once every four years, so we don’t have thousands of at-bats to analyze. Clinton, who will reportedly officially announce her campaign Sunday, could lose the primary. Perhaps there’s some scandal we’re unaware of. Perhaps she’ll have to drop out because of some health issue. Maybe Martin O’Malley will straight-up beat her; stranger things have … well, OK, maybe not.

Clinton’s primary campaign is by far the most dominant for a non-incumbent president since nominations began to be determined by caucuses and primaries in 1972. The best predictors we have all say Clinton is going to be the Democrats’ 2016 presidential nominee.1

Clinton has pretty much already won the endorsement primary, the all-important pre-voting race to lock up party establishment support.2 Last time she ran for president, Clinton lost the endorsement primary. By this point in the 2008 campaign, she had only one senator endorse her publicly. According to a CNN count in February, Clinton has already secured endorsements from 27 of 46 Democratic senators. That’s a ton of support so early in the campaign. 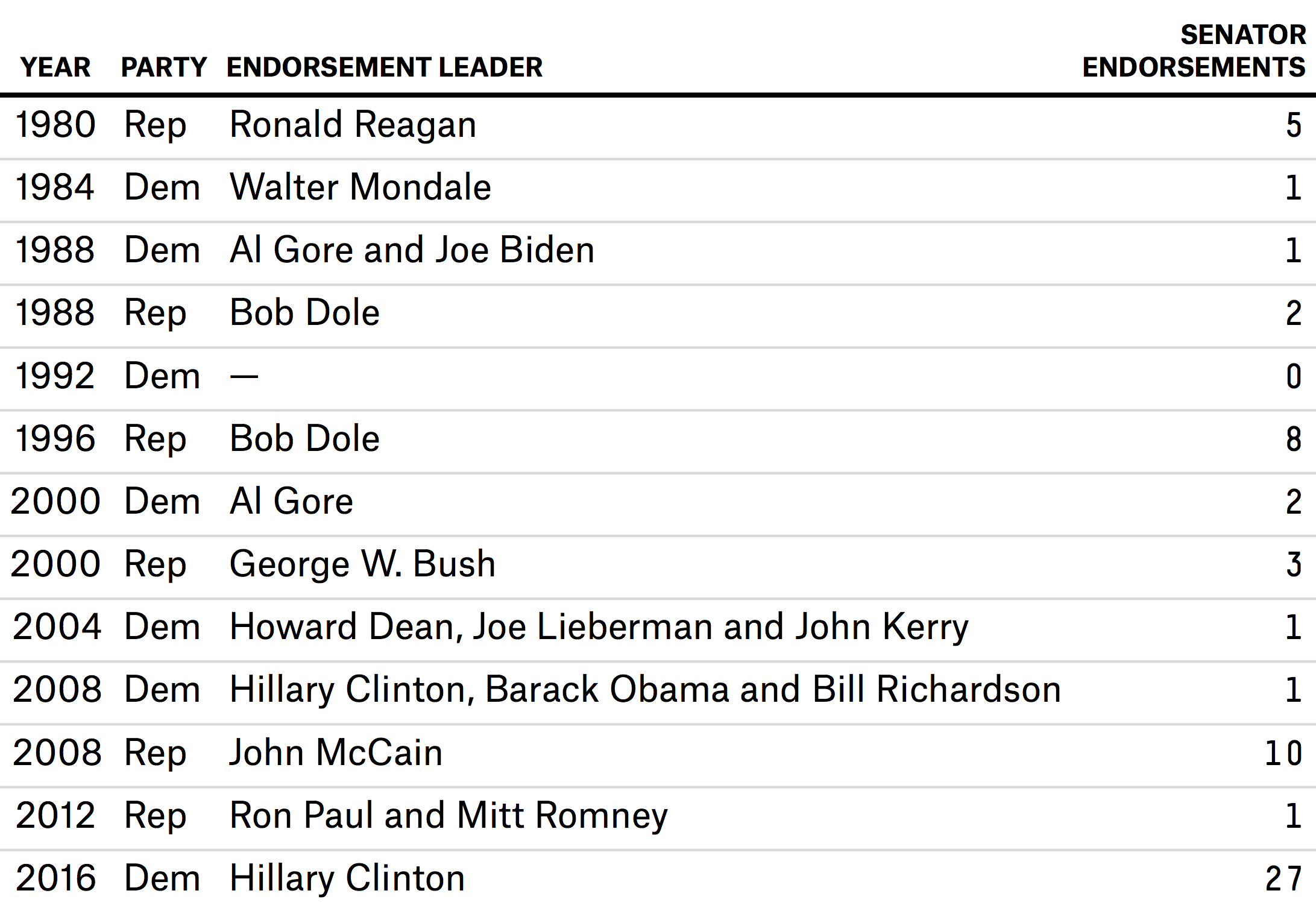 Clinton’s strength is unique. Most years, the campaign is barely underway in early April. And in the years in which endorsements come quickly, elected officials usually wait at least until a candidate formally declares.

But here’s the more amazing thing about those 27 endorsements: That total would still be impressive even if no one else were to endorse Clinton. Only George W. Bush’s 2000 machine picked up more senator endorsements (33), and it took him the entire primary campaign. He didn’t reach 27 until November 1999. The only other two campaigns to come close to 27 were Bob Dole’s in 1996 and Al Gore’s in 2000; each picked up 26. Like Bush, Dole and Gore rolled over the competition.

Just as important as the number of endorsements is where they are coming from on the ideological spectrum. Clinton is earning endorsements from the left, center and right of the Democratic caucus. In this kernel density function of endorsers plotted against their congressional voting record, we see that the senators who have endorsed Clinton look ideologically very similar to those who haven’t (more negative scores are more liberal): 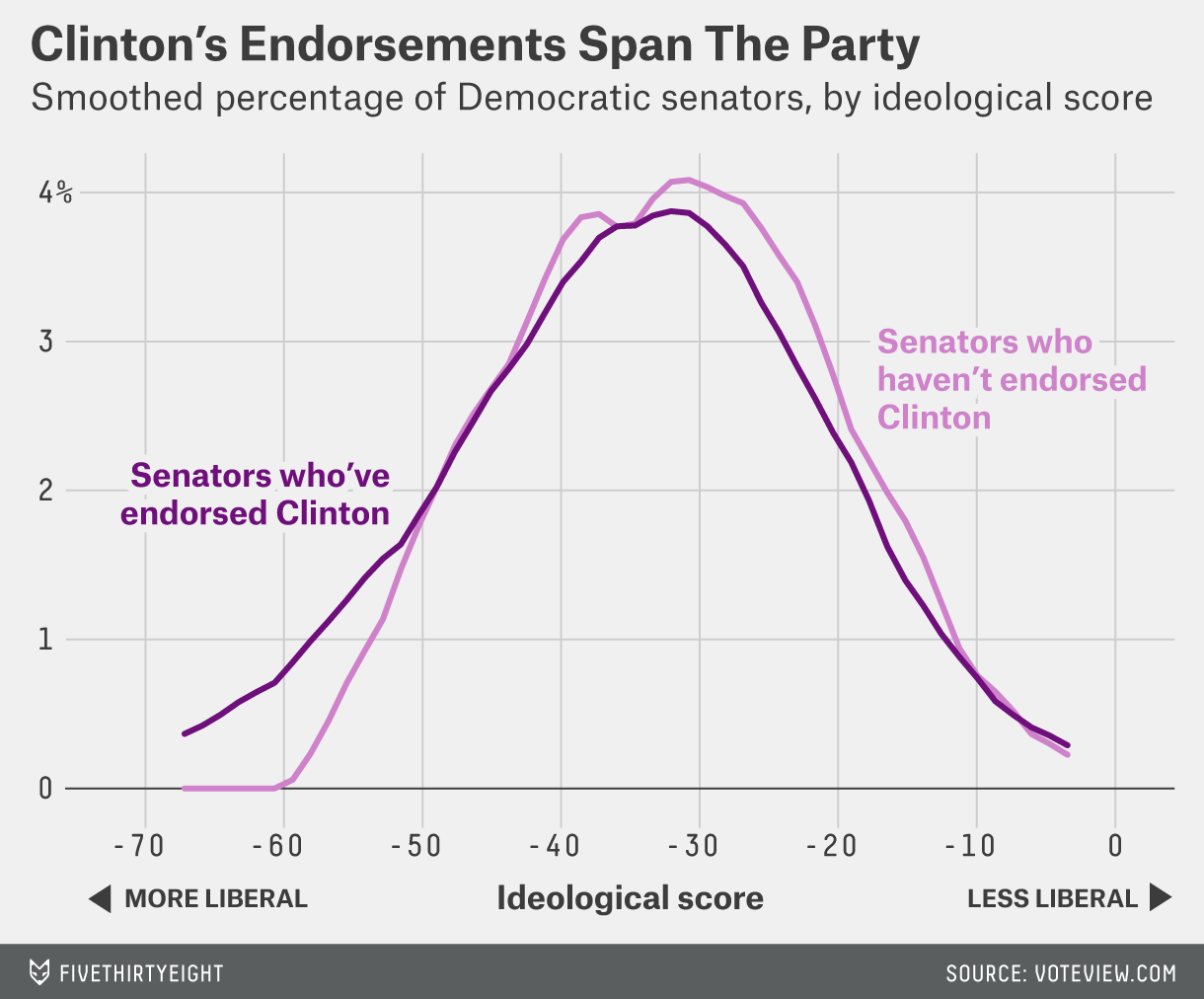 Clinton also has the most dominant poll numbers of any candidate at this point in the election cycle in the modern era. Early primary polling is not the be-all and end-all, but candidates who are polling very well across the board early tend to win their nominations. In an average of polls taken since the beginning of the year, Clinton is above 50 percent in Iowa, New Hampshire and nationally. No other non-incumbent in the modern era has done that in the first half of the year before the primaries began. 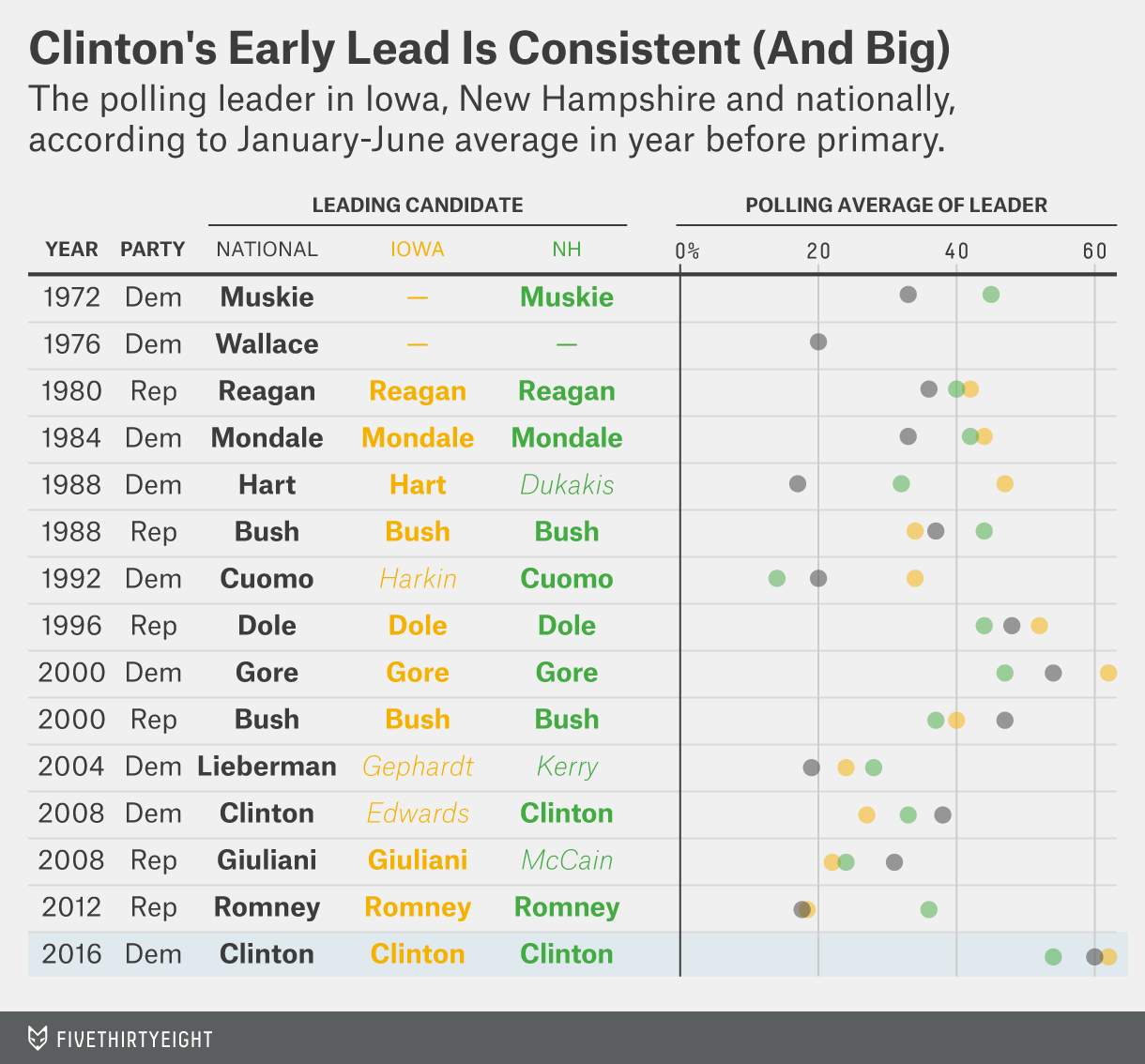 It’s only in Iowa where Clinton doesn’t have an outright claim to the strongest polling average in recent history. But she’s still in a strong position at 62 percent — about where Gore was in early 1999. Gore went on to win Iowa with 63 percent of the vote and every single primary after that. Dole was the only candidate besides Clinton and Gore to hit at least 40 percent in early Iowa, New Hampshire and national polling. He won 44 states and easily took the 1996 GOP nomination.

Clinton is in a far stronger position than she was last time around. Back in 2008, she was trailing in early Iowa polls. She earned only a third of the vote in early New Hampshire polls and was below 40 percent nationally.

Nor are there any real holes in her support. According to YouGov polling conducted in March, 68 percent of Democrats believe she is “about right” ideologically.3 Only 12 percent of Democrats would not consider voting for her, according to a February CBS News survey. In the latest Marist College survey, she earns more than 60 percent among liberal,4 moderate and conservative Democratic primary voters.

Clinton’s early polling tells the same story as the endorsements: Democrats don’t seem open to other options. It’s not a situation likely to tempt a formidable Democrat to jump into the race. Which brings us to the third point …

The (lack of) competition

Clinton looks like she’ll have perhaps four competitors for the nomination: O’Malley, Lincoln Chafee, Bernie Sanders and Jim Webb. Sanders is the only one who currently holds elected office. Only O’Malley has ever been elected as a Democrat to any office for more than one term.

O’Malley’s turn as governor of deep-blue Maryland went so far south that a Republican succeeded him, which is a fate that didn’t even befall Chafee. As I’ve written previously, O’Malley’s ideological record and donor base do not suggest that he can successfully challenge Clinton from the left.

Although Sanders caucuses with Democrats in the Senate, he’s a self-described socialist. If he ends up running, he’ll win some plaudits on the left, but that’s about it.

Webb, like Chafee, is a former Republican with little history with the Democratic Party. That might be forgivable if he were actually a mainstream Democrat, but he was the fourth-most-conservative Democratic senator during his final term in Congress.

When you look at the board, there is no Barack Obama waiting in the wings. Warren has endorsed Clinton and has given every indication that she is not going to run.

At this point, Clinton’s path to the nomination looks easier than anything we’ve seen before.