Rick Santorum, like many other candidates running for president, has very little shot at the nomination. But unlike most of the other also-rans, Santorum’s second White House run will likely be revealing of the 2016 GOP field: He’s a good yardstick.

You probably remember Santorum as the main challenger to Mitt Romney during the 2012 Republican primary. He won the Iowa caucus (by the thread of a sweater vest) and 10 other caucuses and primaries along the way. For a brief second, Santorum looked like he might win the Michigan primary and throw the field into chaos.

So why doesn’t Santorum have a chance this time around? Much of his success in 2012 was thanks to a historically weak field. Santorum only rose in the polls after Rick Perry looked like an idiot during the debates, Herman Cain dropped out of the race because of sexual harassment allegations and Newt Gingrich got eaten alive twice in the invisible primary. Santorum was simply the last man standing — the only “conservative alternative” left.

Case in point: Santorum hasn’t built off his strong showing in 2012. He starts his 2016 bid just about where he started his 2012 run. He’s stuck at or below 2 percent in the national polls.1 He’s right around 3 percent in Iowa, just as he was at this point in 2012. And he’s just above 1 percent in New Hampshire polls.

Can he catch fire again? It’s unlikely. Santorum is facing much tougher competition. In 2012, there were only six candidates who had recently served in a prominent elected office (i.e., governor, senator or vice president). That was tied for the fewest such candidates for an open nomination in which a sitting vice president didn’t run in the modern era. This year we’re looking at upwards of 13 who meet that criteria — the most in the modern era.

This is a crowded, tough field.

But while Santorum had little serious competition for the religious right in 2012, this year, that ideological space is crowded. In the last two national surveys from Fox News and Quinnipiac University, Santorum was languishing in 10th place among white evangelicals. Apparently, he hasn’t carried over any goodwill from his 2012 bid. He’s in the same place with born-again and evangelical Christians as he is among Republicans overall. He’s even trailing Gov. Chris Christie! 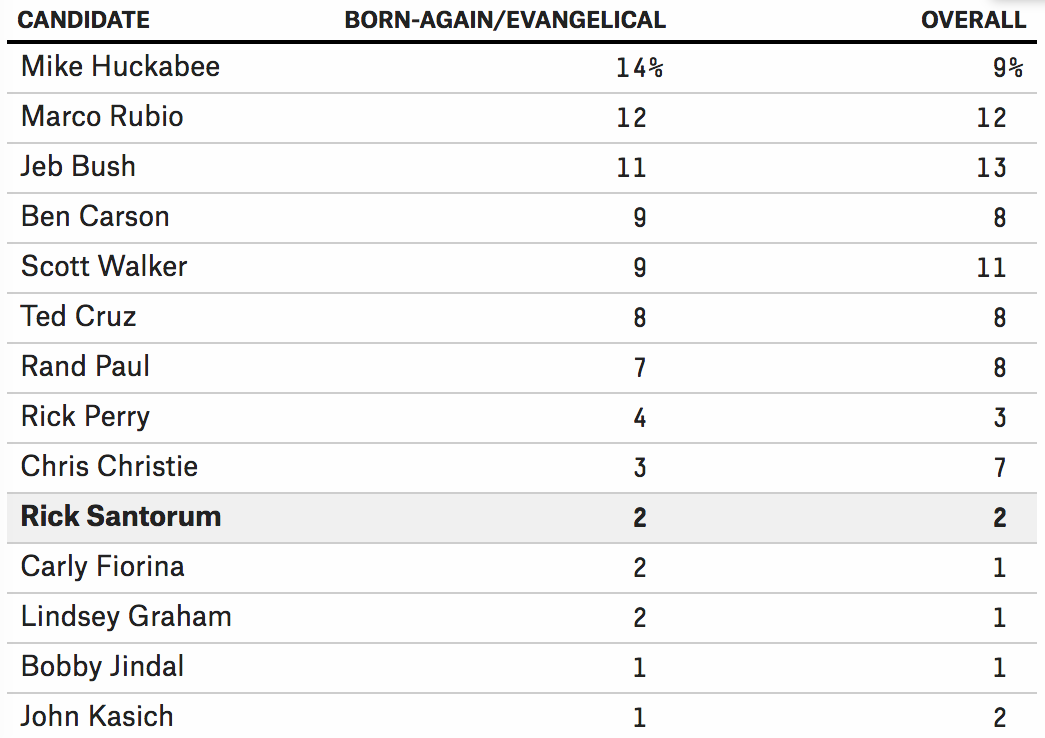 It’s more than just polls, though. Check out this chart of the GOP field I’ve stolen from my colleague Nate Silver. I’ve updated it based on who is actually running and where the candidates seem to be positioning themselves. 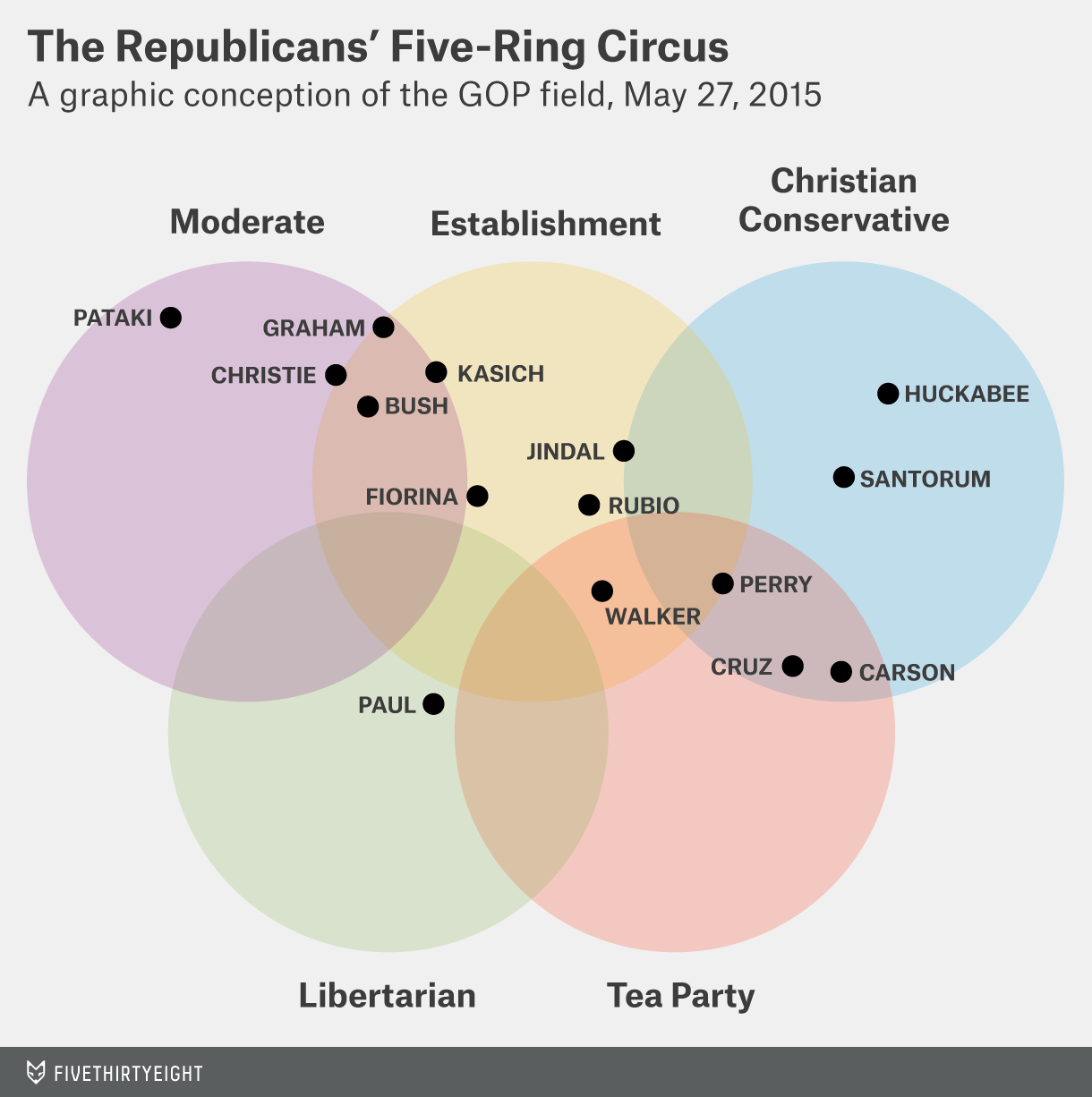 Ben Carson, Ted Cruz, Mike Huckabee, Bobby Jindal and Perry are all going after the same vote, trying to appeal to religious conservatives. Carson is an evangelical Christian. Cruz announced his campaign at Liberty University, a Christian college. Huckabee is a former preacher who garnered support in 2008 from many of the same voters who backed Santorum in 2012. Jindal, an evangelical Catholic, is pretty much basing his whole campaign on reaching out to evangelicals. And Perry remains a favorite among Christian conservatives.

Not only that, but the top tier of the 2016 field — Jeb Bush, Scott Walker, Marco Rubio — isn’t anathema to religious voters in the same way Romney was in 2012.

So “values voters” have a lot of options, but maybe Santorum can woo other wings of the GOP? Again, it’s unlikely. Santorum’s record on fiscal issues has been ripped by economic conservatives. In 2012, the Cato Institute called him a “Big Government Conservative” thanks to his votes for No Child Left Behind, Medicare prescription drug benefits and “the bridge to nowhere.” During that election, the Club for Growth said he was “plagued by the big-spending habits.”

He also has little to offer establishment Republicans mostly concerned about taking back the White House. Santorum won two Senate elections in Democratic-leaning Pennsylvania, but his 2006 defeat by over 17 percentage points was by far the worst for any incumbent that year. His statements on contraception, gay rights and women working outside the home suggest it’s unlikely that he would win over the middle.

His lack of appeal across the party and lack of electability have resulted in little support from the party actors. Even in his relatively strong 2012 bid, not a single Republican in the Senate endorsed him. He received fewer House endorsements outside his home state (three) than Gingrich, Romney or Perry. Not a single governor endorsed him, though Alabama’s Robert Bentley said he voted for him. This year, Santorum hasn’t picked up any major party actor endorsements yet.

Overall, there’s just little reason to believe that Santorum has much of a chance to come close to his 2012 showing. The 2016 field is a lot more crowded, and Santorum’s appeal is limited. If Santorum can repeat the 2012 magic, then either the 2016 field is really weak or the 2012 field was a lot stronger than we thought.